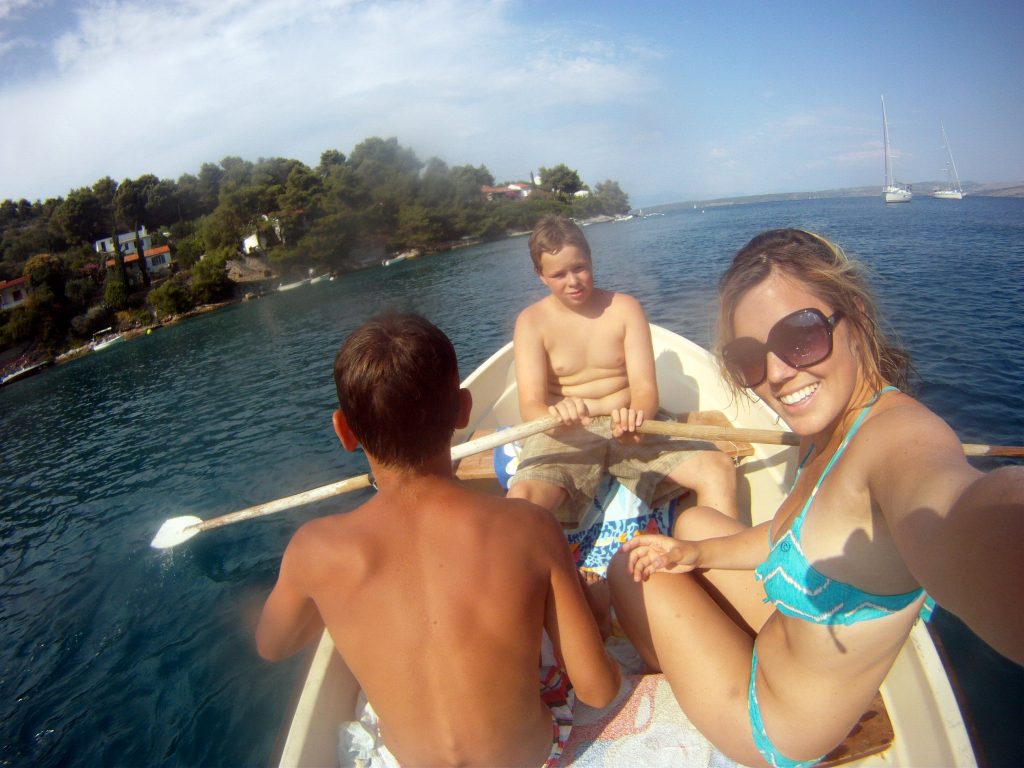 Moritz felt a bit threatened after I told him two locals rowed me around all day, providing insightful conversation.

Yachtsurfing: The Improved Version of Couchsurfing

I logged into my couchsurfing account and searched for a host in Split. One of the first results: a host named Kevin with a yacht with two spare bedrooms, 35 positive references, and a friendly personal description. I sent the request, eagerly awaiting acceptance like a high school senior checking the mail for college acceptance letters. I so badly wanted to be admitted to the Ivy League of couchsurfing.

I scrolled through the references.

“…I guess you can say he was the perfect host! We went sailing around the islands in Croatia and snorkeling when possible…” Sasha, Julia, and I were going to spend the next few days on his yacht, floating around the Mediterranean Sea! I had hit the jackpot of budget traveling and envisioned myself in a wide-brimmed hat and large sunglasses, leaning off the bow of the boat Titanic-style.

I took this as an opportunity to buy a wide-brimmed hat. I rationalized this purchase as a necessary one, because I had a questionable mole on my arm that needed a bit of extra sun protection. Little did I know, wide-brimmed hats are completely unpractical because they take flight the second you start walking or reach a sailing speed of over one knot. It was on my head for maybe ten minutes before becoming just another cumbersome item to lug around. For some reason, when Sasha, Julia, and I met Kevin, we proceeded to tell him our life stories. I mean honestly, we would not shut up. I had a few flashback moments to my interviews with college recruiters, but tried to suppress them. The poor fellow barely got a word in the entire night… but at least we gave him a bit of beer to keep him busy! The topic of the night lingered around violence, with Sasha saying that if she had to kill somebody, she’d “want to crush their windpipe.” Boats parked on the nearby docks began to shhhh us, but we were unphased.

We were happily surprised to see that his yacht was still in the harbor after the girls and I grabbed dinner. If I were him, I would have hastily sailed to safety.

The next morning, we set sail to some nearby deserted islands and went snorkeling. While swimming on my own, I found a large hole underwater. As I got closer, I felt cold water surging from it. What is this impeccable discovery?

I texted Moritz asking what my finding might be. Expecting a long scientific explanation, he responded, “It’s just a hole with a cold undercurrent or something.” Two small boys in a rowboat paddled nearby us. I asked them if I could hitch a ride – they gladly obliged. I could get used to this yachtsurfing thing, I thought, as the boys clung to the side of the wooden boat for stability while I stepped in.

Carlo, the eleven-year-old rower, began chatting immediately. He told me about how he wishes he was still three, because back then, his mother wasn’t so strict with him.

“I hear ya. Those were the days…” I sympathized.

My two sailor boys dropped me back off at the yacht, where the girls and I once again pummeled Kevin with stories and impersonations.

Sasha put on the southern twang of an elderly woman and began speaking, “You know Michael Callahan? Our old dentist? The one that married Marsha? Well his old ex ex wife went on a cruise… a cruise to the Bahamas… and when she got there, she got one of those wax things? You know, those wax things where you wax down there? And then she died.”

Kevin, who I had started calling “Kelvin” raised his eyebrows.

Unfortunately, our short yacht-surf had to come to an end. The next day, I waved goodbye to Sasha and Julia who were heading off to Italy. Because of my visa, I was locked to non-Schengen countries and couldn’t tag along. That’s the worst part about meeting people you really like while traveling – the goodbyes are never easy, and “see you later” just feels awkward. I hope that someday we can catch up again and laugh our way through another adventure.

JACK! JAAAACK! I called, but Sasha and Julia were already aboard their Ferry… sailing off into the distance. The next time I logged into my couchsurfing account, I was happy to see a positive reference. Maybe our endless stories told to Kelvin weren’t so bad after all.