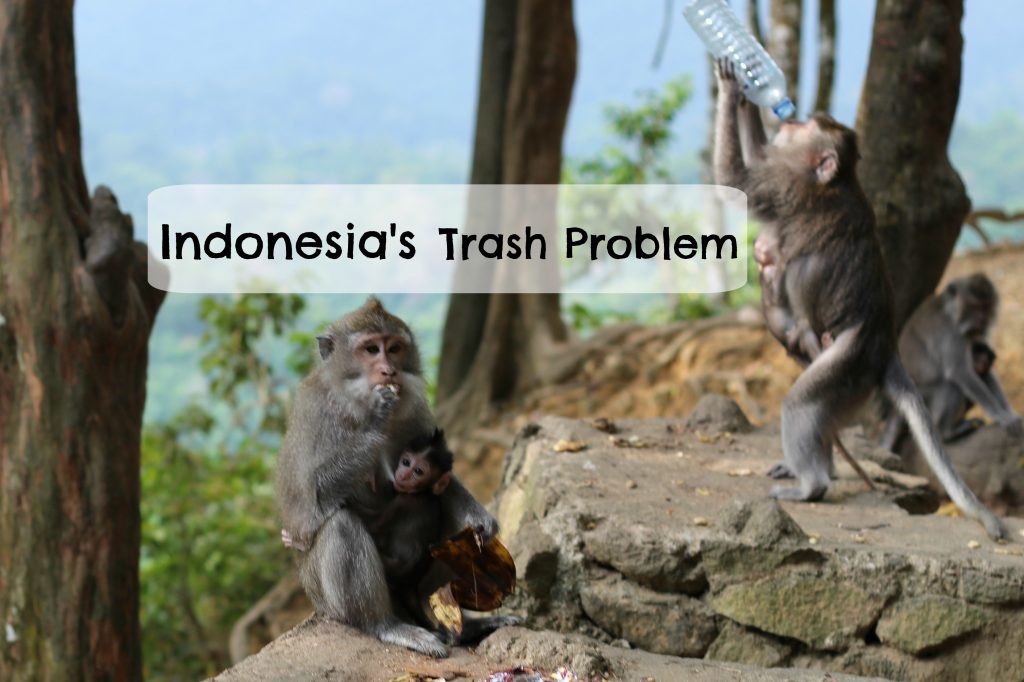 The Worst Thing About Indonesia: The Trash Problem

“Why did you just throw that into the ocean?… WHY?”

The fishermen who had just tossed a bottle filled with yellow liquid overboard began giggling.

“Why would you throw petrol into the water?!”

Moritz jumped into the ocean and began swimming towards the bottle bobbing up and down between our boat and theirs.

Moritz retrieved the bottle and tossed it into our boat.

Sadly, we’d seen other bottles floating in between waves during our surf session at Don Don’s, a break just off of the coast of Lombok. Every seemingly deserted beach in Indonesia had piles of garbage strewn along it – proof that humans had not only been there, but abused it. This wouldn’t be the first, second, third… or even tenth time we’d see a local Indonesian mindlessly throw trash on the ground. We’d watch monkeys run off into the forest with plastic bags of chips given to them by humans. When our friend asked a man, “And who is going to pick up the can?” after he had given a beer to one of the monkeys, he simply laughed and shrugged. The piles of waste in every corner, mistreatment of animals, and seemingly careless attitude from the locals we confronted began to take its toll on me. In the evenings, my eyes would sting and water from the ash of burning trash piles lit in front of every home. The smell of melting plastic became something that I eventually grew used to.

For the past year, Moritz and I have been trying to live more mindfully when it comes to plastic consumption. Whenever possible, we use canvas bags for grocery shopping, forgo plastic packaging, and pick up stray garbage on our local beaches. We are galaxies away from being wasteless saints, but all of our actions feel so useless and futile after visiting Indonesia, where couch sized piles of trash are found everywhere – often along the shoreline, blowing into the water. Who is to say that our same urine filled water bottle wouldn’t end up right where we found it?

There’s a few reasons why Indonesia’s trash problem is as bad at it is.

For one, there simply isn’t a proper system in place to handle the massive amounts of waste. On a practical level, it’s hard to find a trash can to throw garbage in. Businesses don’t want the responsibility of throwing their own and customer’s trash away, and cans in public places are sparse. On a tour through natural waterfalls, I asked our guide where I could throw away a piece of plastic that we’d found. He pointed to a pile of trash next to a small creek. “We will clean it up on Sunday,” he assured me. Judging by the size of the garbage heap, I highly doubt he was telling the truth.

Even if the locals are able to confine the waste into one space, there is no system to move it to a processing plant.  With 250 million people and thousands of Indonesian islands, the logistics are mind-boggling. Transporting the trash costs money – something the majority of Indonesians frankly don’t have. It explains why nobody wants to take responsibility for the waste cultivating in every crevice of the country. In Bali, which is just one of Indonesia’s islands, over 5,000 tons of  waste are dumped into the waterways on a daily basis with no filtering mechanism in place, according to ROLE, a conservation charity. All of this congregates on Bali’s formerly pristine beaches, and is pulled out to sea with the incoming tides. Those who once were able to take a peaceful stroll along the shore now have to keep an eye out for medical waste and sharp objects embedded into the sand.

Secondly, the culture is not as eco-focused as it should be. One popular explanation is that older generations used to throw everything on the ground because food packaging was made of biodegradable banana leaves. Now, the act of throwing wrappers on the ground has stayed, but the banana leaves have been replaced with plastic. It’s a stark contrast from many other Asian neighbors. For example, Singapore places heavy fines on littering, and is known as one of the world’s cleanest countries. Japan has an overall waste-conscious society, where even cigarette butts are placed in personal containers and carried around until a trashcan is available. Indonesia, from my experience, doesn’t have the infrastructure and overall collective conscious to be eco-friendly. The Indonesians who are looking to make a positive change regarding pollution are seen as outliers and don’t have the financial means or influence to carry out their goals.

I probed my Indonesian friend, Angga, for answers. “As long as we can eat three times a day… we don’t care about the other stuff. It’s the classic problem for a developing country – money and technology.” He goes on to explain, “There is no system in place to sort, recycle, and reuse our garbage.” What can be changed?

Fortunately, there are ways that Indonesians and tourists can help turn the country around. Indonesia has had a hero when it comes to animal conservation, Pak Ketut Putra, who convinced religious leaders to ban turtle hunting. Turtle populations immediately rose the following years. So, there is hope of more religious leaders and influential people incorporating environmental ideology.

And we must be prepared, as travelers, to look closely into the mirror. Tourism is one of the main sources of pollution for Indonesia, with visitors adding to the piles of garbage. Hotels and restaurants act as revolving doors, where people come in, consume, and leave without any thought given to where their waste is landing.

Luckily, some expats in Bali have made an effort to help the tourism industry develop a waste system on even the most simple levels. In Kyle Thiermann’s project, Surfing for Change, he delves into Bali’s trash problem a bit deeper. He was able to find a foreigner-founded organization that equipped vendors in Uluwatu with rubbish bins – something that hadn’t existed there before! Waste previously was being dumped along the cliffs, gathering in streams and in the ocean. Another surfer has started a petition to enforce a plastic bag ban on the island… but the mayor has requested one million signatures, a demand that’s been hard to meet.

In addition, companies, such as Quiksilver and Coca-Cola have taken note by investing in programs that aid locals in managing their waste.

As travelers, we take on the role of being a citizen of the world. Whenever possible, we need to investigate where our trash is going. We need to reduce our dependence on disposable goods. We need to support sustainable hotels and tour operators, even if it means spending a bit more money. We need to pick up garbage, even if others laugh at us. We need to educate people, even the locals and even fellow travelers. So many people in Indonesia are barely surviving, worried about where their next meal is coming from – but we’re not. We are the ones with the time, the resources, and the knowledge to help change things around. It’s not likely that your two-week trip to a foreign country will save the world from drowning in trash, but it will make it just that much better. And that matters.