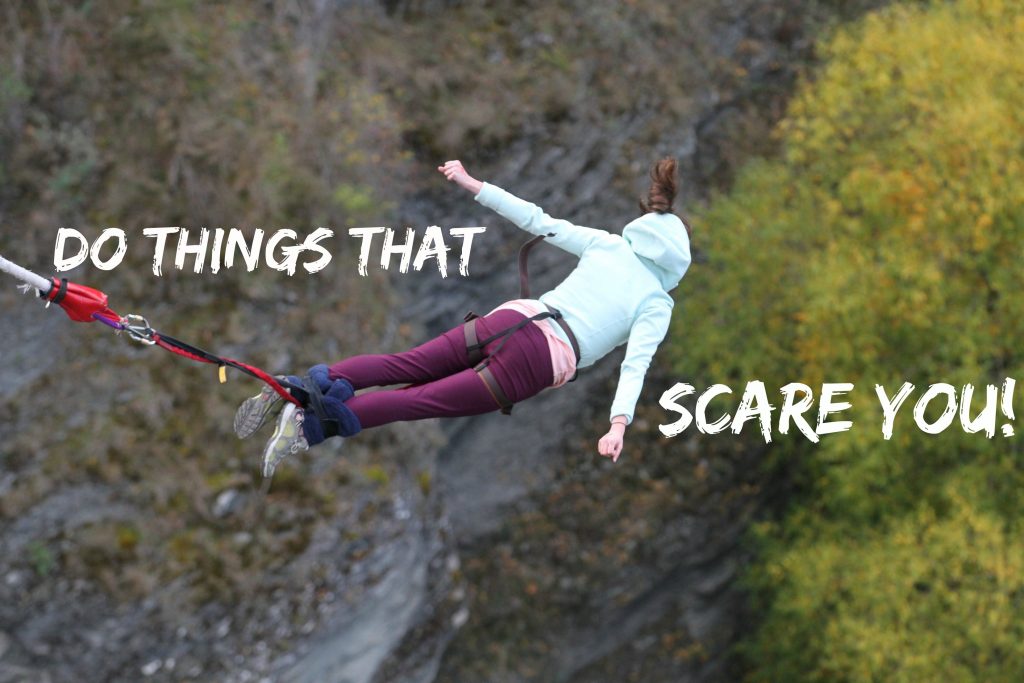 Why You Need to do the Things that Scare You

This guest post is brought to you by guest author Alli Blair of The Vintage Postcard.

When I was in university, I always dreaded the moment a professor would ask to pair up with someone. I would become paralyzed with fear and nerves. Instant partnerships would be formed in every direction and I was left sitting at my desk alone and partner-less because I didn’t do so much as move one muscle. I then had to endure that terribly awkward moment of raising my hand when the professor asked who didn’t have a partner.

I used to be really shy and felt major anxiety having to go up to someone I didn’t know. I realized that this fear never got me anywhere and held me back. I decided that it was silly. I wanted to get over it. So, I did the scariest thing I could at the time, which was audition for the school’s dance team.

I knew that by doing this audition, I could prove to myself that by putting myself out there and embracing the fear, there was the chance something positive could come from it. Even though I was trembling from head to toe throughout the whole audition, I was offered a spot, and I danced with the team for the rest of the year. I was able to meet new friends and challenge myself in new ways because of that initial want to eradicate my crippling shyness that had been holding me back. That first step made it easier for me to keep going, because I would think less about what could go wrong and instead what could go right. If you go to the gym and do the same thing every single day, you’re not getting stronger or faster, you’re just getting really good at doing the same thing every day. Your muscles are built when they are forced to adapt to a new weight, a higher number of repetitions, or less time between sets. As long as one thing is different compared to the last time, whether it’s lifting heavier or completing something faster, progress can be made.

Fear and change are good things.

Fear lets us know when something does need to change, and change enables fear to crumble away and let the positive come forth.

Jumping out of a plane or off a bridge would have been something classified as my biggest fear before I traveled to New Zealand. Queenstown is known as the “Adventure Capital of the World” and I got really caught up in wanting to make the most of that while I was there. Before my skydive, I couldn’t stop from quivering madly while going up in the plane. I was petrified, my stomach flipping like a fish out of water. I was given some oxygen because I couldn’t control my breathing. As soon as the door to the plane opened and roared with angry wind I felt a sickening wave of pure terror, and seconds later I was shuffled to the edge, barreling out of the plane and into the clouds.

Once I landed, body pumping with sheer adrenaline, I felt so alive. The same went for my bungy jump, where I literally took a leap of faith, a leap that would bring me feelings of invigoration and vitality. Embarking upon something new can be terrifying. It isn’t easy. You never know for certain where you’re going to land until you get there (literally, when it comes to skydiving and bungy jumping), and it’s hard to silence your fears about just where that may be. But fear doesn’t have to control you, not if you put your heart into each step of the moment and know that yes, there’s a chance you may not succeed, but hard work and effort will always outweigh a failure. There’s nothing worse than beating yourself up and holding onto regrets that have a tendency to haunt us.

It doesn’t need to be this massive, overwhelming, jumping out of a plane or jumping off a bridge goal. Whatever it is you want to do, whether it’s trying new food, raising your hand in class, saying hi to a complete stranger, traveling solo for the first time, you will manage to impress and inspire yourself for tackling fear in the face, and reap the many benefits.

That’s why you need to do things that scare you. To help feel alive and awakened, to be proud of yourself and your abilities, to inspire yourself, to overcome and rise above fears that have held you back, to minimize feelings of regret, to challenge and push yourself in order to grow into a more assured and enhanced version of you.

Alli Blair is an adventurous travel writer obsessed with all things vintage — hence the name of her blog — The Vintage Postcard. She loves yoga, a good breakfast, and spinning her globe flagged with all of the places she’s been. You can read about how she chose caving over raving and about her work hard/play harder lifestyle here.