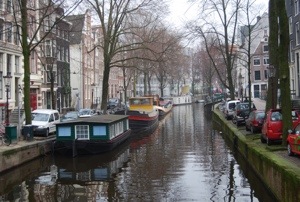 When in Amsterdam, Go Dutch!

My oh my, where do I begin? First thing’s first — I loved Amsterdam approximately 23536 times more than I ever thought I would.

Lauren and I were dropped off in the middle of the city center by the Van Gogh museum, one of the best museums in Amsterdam, with our 30 lb backpacks and wandered to our first couchsurfing host’s home! He lived in a small studio flat near one of the canals and had a huge Obama poster put up on one of the walls.

We had a few glasses of wine and some Thai food at a few restaurants nearby his flat, in Nieuwmarkt, a neighborhood close to the infamous red light district. Our conversations went from silly and simple to talking a out stark differences in Dutch and American cultures (which deserves a whole post in its own). For example, our host explained that the Dutch are told to, ¨keep your head low¨ and avoid causing a ruckus. This is so different from the way I’ve been raised – that it’s okay to stand out and be more individualistic.

Of course, you can’t be in Amsterdam without visiting the red light district, making it our first stop after sundown. Lauren grew sick of me telling nearby Europeans that we were in the area so she could try out to be a red light girl  — so that we could bump our 25 Euro/day budget to a 30 Euro/day one!

I have mixed feelings about legalizing prostitution — on one hand, it does regulate the industry and help women who are assaulted in the industry be less victimized by controlling pimps or agencies because they can safely go to the police or a reporting agency. However, despite the legality, many girls are forced into the industry which poses an inherent problem in itself, legal or not. But I digress.

Some of the girls told men that they would cost anywhere from 35 to 50 Euro – this shocked me a bit because I assumed the starting price would be higher. I asked my host about a million questions, and understandably he couldn’t answer many because he’s not in the industry (so he says!).

The next day, Lauren and I wandered the streets of Amsterdam and walked from Nieuwmarkt to where the Anne Frank house was located. After about… two hours of getting lost and then recalibrating, we finally arrived. Right away, I was extremely disappointed. The building had been turned into a fancy museum with a two hour line dragging out of the front door and into the streets. The whole building had been redone to a more modern feel, with glass windows and what looked to be a cafe on the top floor. It felt like something that should, in my opinion, be untouched or preserved was turned into a modernized money market (which is just how the world works I guess). I wouldn’t have been surprised to see a man walking around the line hollering, ¨POPCORN! POPPPPCORN! GETCHA POPCORN!¨while people awaited to see Anne Frank’s home. Unfortunately, commercializing things that should be kept sacred has been an overarching theme of my travels thus far.

On a seperate note, I know many hear the word Amsterdam and immediately sprout marijuana buds in their brain. If you have never been to Amsterdam, I’ll burst your bubble now — no, the city is not floating on a cloud of pot smoke.

However, I think it is essential that you know that a coffeeshop is not what it sounds like. And call me naive, but I did not know this before arriving in Amsterdam.

Lauren and I were looking for a fresh cup of hot coffee to walk with (did I mention it was 0 degrees celcius and I packed as if I was going to the bahamas?).

¨Ooh, a coffee shop!¨
We walked into a dark swanky bar that had reggae playing in the background.
¨Coffee please?¨
The coffee man asked for I.D.
¨Why would I need I.D.? I just want a coffee.¨
¨Did you bring your own?¨ He asked.
Why would I bring my own coffee? Then, I realized we were in a coffeeshop – which explained the pot smoke seeping into our nostrils and the guys in the background snickering with bloodshot eyes. Apparently, the coffee was rarely purchased that the owner begged us to tell us how the coffee tasted because he, ¨bought the beans a while ago but don’t know how they really are.¨Sidenote – the coffee tasted like watery swamp juice. I wanted to get a muffin because I was starving, but was scared it was an infamous ¨spacecake.¨ I looked at the sign of the shop when we left and realized that the coffee cup had smoke, not steam, billowing out of it in the logo.

Another thing I learned the hard way was how the signs allowing you to cross the street work. In the states, the seconds on the sign count down the seconds you have left to cross. In Amsterdam, it counts down until you’re able to cross.

Imagine my surprise when I crossed the street with 40 seconds left and had to suck in my tummy to avoid cars coming on either side of me — I didn’t know anything except that I was going to be turned into a Dutch pancake (yum!) soon if I didn’t figure the streets out. The cussing and pointing to the sign helped me figure out where I went wrong soon after, though.

We went to our next Couchsurfing host’s house and he let us bar hop with his friends. Our next host lived on the other side of Amsterdam, requiring a walk and ferry ride to get there. Thankfully, in the city of bikes, people are quite talented at driving the bike with a person (me) on the back. I was a bit scared when the Portugese man biking me around laughed and said, ¨no brakes!¨as we sped down a cobblestone hill.

The next day, Lauren and I devoted to discovering museums. We attended the Van Gogh museum and tried to see another… more eclectic museum. Apparently there is a man in Amsterdam who goes around the entire world collecting rocks that glow under a black light. One man told me, “It’s lifechanging — things you think are ugly in the day are pretty under less light.¨

He didn’t laugh. Weird because he had told me randomly that he had, ¨shaved a peach once…¨and you would think a peach-shaver might laugh at a joke like that.

Anyway, the rock collector intrigued us but unfortunately we couldn’t find the time to see the museum because over half of our days are spent wandering around Amsterdam getting lost from place to place (which in my opinion, is a wonderful way to see a city).

The next day, we missed our ride to Paris (long story) and I frantically asked the Couchsurf world to adopt two blondes from California. Shockingly, a lot of people responded. Anyway, a person who offered to host us before responded to my message to him saying, ¨Mayday! Mayday! We’re stupid and stuck here, can I still come by?¨ I think just responding to us says a lot about his character. We caught a bus to his house and were dropped off literally at his front door. Surprise! American Delivery!

That night he introduced us to Dutch cuisine — pancakes (different than Bisquick) filled with cheese and another with apples and cinnamon. They were amazing and he flipped one about 8 inches into the air!!!! The man has mad hops when it comes to cuisine. If that doesn’t impress you, then go lick a seat at iHop.

It was a blessing in disguise that we missed the bus because the next day ended up being our favorite. The sun was shining and our wonderful host took us all around Amsterdam, showing us the flower market and stopping for tea at a cafe that overlooked the entire city. He had a bike taxi system where he would bike me about 5 blocks, drop me off… then go back and get Lauren. That’s what I call efficiency (and what he called a workout).

It’s my first time on a European keyboard. Of course I haven’t done this city justice, and there is so much I have left out — but my bedtime calls and I feel I’ve hogged this hostel computer long enough.

Stay tuned — I still have to tell you about a creepy man we found on a carpooling website, Paris, and Madrid!