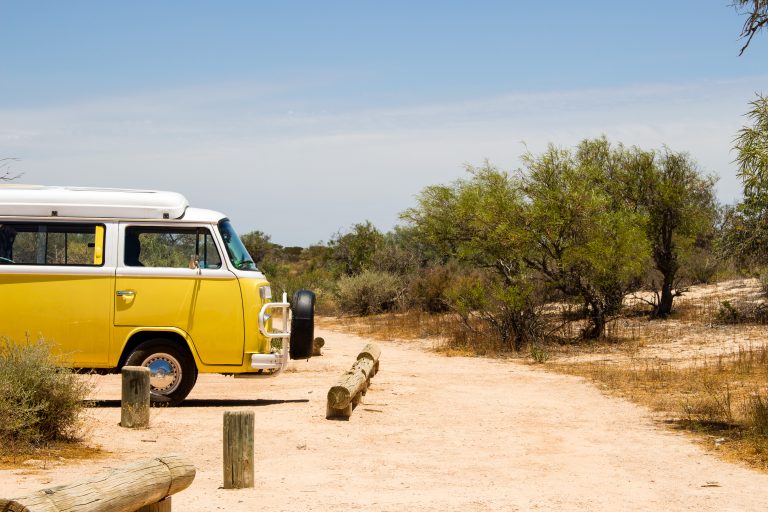 Western Australian Road Stops: The Weird and the Wonderful

Of course, when on an eight-day road trip along the coastline of Western Australia, there are bound to be a few strange sights along the way. With so much space and so little outside interference, towns, nature, and creatures live unmolested – allowed to evolve exactly as they please. From life-sized green aliens, to living rocks, to a tiny town developed around a pod of dolphins, Western Australia never ceases to be simultaneously weird and wonderful. Here are a few of my favorite WA road stops from Perth to Shark Bay.

Coffee with a dash of aliens

There’s an unspoken law about West Australian road trips: Stop at every gas station you see. Gas stations are sparse in the outback don’t cater to the trendy likes of mini Starbucks cafes or one-layout-fits-all Shell stations. Outback gas stations are unapologetically unique, reflecting the quirky personality behind the people who run them to every minute detail. Being the only business around, friendliness of your gas station attendant is optional. What are you going to do? Put another 200 kms with your tank on empty and swipe your credit card there? I like to think that the fact that workers in the outback choose to be cheerful even when they don’t need to be is a point in favor for humanity. And we need all the points we can get. Then there’s the Red Car Café and Motel.

Almost in complete contrast to the Billabong Roadhouse, the Red Car Café has a simple aesthetic of red and yellow décor. With only each other to compete with, these two spots have developed into places chock-full of personality and have skipped the mandatory conventionality. The most fascinating thing about these road stops is that they could get away with serving pure junk and charging a small fortune for it. And yet they don’t. The owners take pride in staking claim to a few of the only inhabited stops on the NW Coastal Highway, and it shows. I’ve read a few blog posts and Tripadvisor reviews that describe the experience of being near stromatolites at Hamelin Pool, one of the oldest forms of life to exist on our planet. Though most are in awe that these little lumps of life are still hanging around after 3,500 million years, there were a few people who are a little more… critical. In In A Sunburned Country, travel writer Bill Bryson first compared stromatolites to cow patties, and then digressed,

“But it is a curiously giddying moment to find yourself staring at remnants of the Earth as it was 3.5 billion years ago.”

Sure, if you are expecting a living rock to tap-dance, cartwheel, or turn itself into the stone that brought down Goliath, I can see how you might crave a more enthralling experience. However, thanks to stromatolites, humans exist to complain about the underwhelmingness of their being. Credited with being the first entities to produce oxygen, they contributed to the evolution of all oxygen-breathing life forms. If we could shrink ourselves to the size of a bacteria, we’d see that these living rocks have even more biodiversity than a lush rainforest. They are one of the oldest living things on our planet. (And I don’t mean that the individual cyanobacteria — literally, blue-green algae — are 3,500 million years old, but the species and forms of them are.) If you can think beyond their visual simplicity, it’s exciting to think about how these living blobs were once the catalyst to all types of life. And surprise surprise, as humans often do when we want to get our mushy bodies as close as possible to other creatures, we messed up the delicate ecosystem of the area. Overly reliant on human feeding, the mother dolphins did not teach their calves how to hunt properly for prey. Unable to catch their food, the dolphin population turned into a “welfare pod” and the babies starved. But hey! The tourists got pictures with the dolphins and the nearby resort made tons of money, so at least the wild baby dolphins didn’t die for nothing.

Anyways, now there has been a shocking revelation of, “hmmm… maybe we shouldn’t interfere so much with nature after all?!” and the dolphin feedings occur just 2x per day, where the visitor center provides just a small percentage of fish to the population.

The dolphins didn’t come by while I visited, but I did get a close-up look at a sea turtle swimming along the coastline. Even if the dolphins did make an appearance, I prefer to see animals out in nature, doing their own thing without being bribed by people to come near. But, I’m also spoiled this way. It’s common to see dolphins surfing, swimming, and being themselves all along the WA coastline. If seeing a dolphin is a rare treat for you, then it’s a place worth checking out. Beautiful with aqua blue water, Monkey Mia also is a prime spot for whale watching, swimming, kayaking, SUPing, and toasting your skin by the sea. Oh, and Monkey Mia wouldn’t fall under the weird category of Western Australian road stops unless it had a pair of camels living there as well, now would it? Weird and wonderful is a perfect description not just for the road stops in WA, but perhaps all of the people and animals who live there as well. How else could you explain things like quokkas? A man succeeding from Australia and forming his own micronation? And even the expats who call it home? What’s the strangest thing you’ve seen on a road trip?