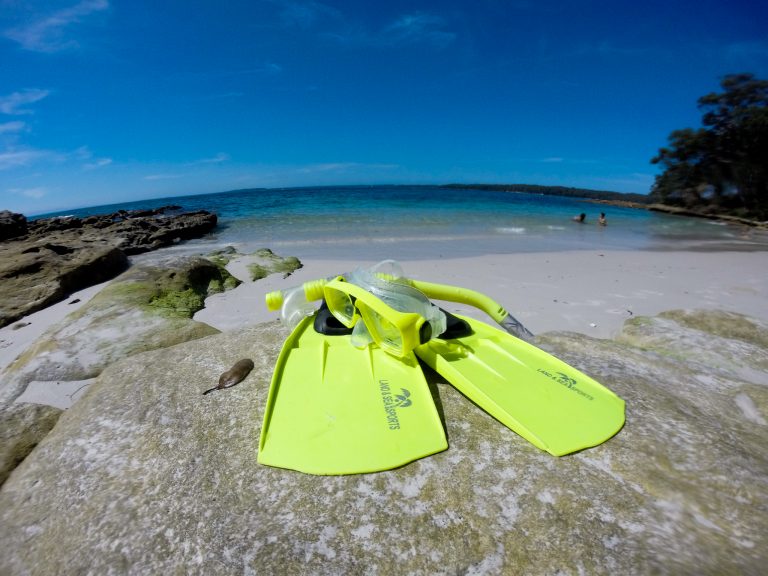 A city slicker, I am not — which means I jump at any chance to get away from concrete, traffic, and the smell of urine that lingers around every single bus stop in the world (fact). My friend Mel, her boyfriend, their friend, Mo, and I piled into a car to escape Sydney for a quick day trip to Jervis Bay, a national forest outside of Sydney.

I caught up with Mel at a blogging conference last year and again when she moved to Western Australia (and then Sydney). On one of the first days we hung out in Perth, we got lost driving to the city dump in search of furniture and a bicycle. She’s one of those people that you instantly feel like you’ve known forever but look back and are surprised that you’ve met less than a year ago. Check out her fun blog, If You Wanna Go, Just Go.

I was panting out of the car window like a dog on our way to Jervis Bay, excited to see what the lush-life looks like outside of New South Wales’s main stretch. The heat of the sun was roasted our feet as soon as they hit the pavement. No matter, after the 2 1/2 hour drive, we too excited for some well-deserved beach time to mind.

A mother kangaroo and her joey plucked grass with their teeth on the side of the trail. In almost every Australian campsite, there’s sure to be a few roos hanging around (Perhaps I’ve told you about my nightmare of a kangaroo touching the side of my tent with one outstretched, pointed finger?). Docile due to their own stupidity and the coercion of food, it’s amazing that humans haven’t obliterated the entire species yet. Or that they haven’t obliterated themselves with early onset diabetes. If you aren’t smart, you better be cute. Kookaburras laughed overhead. We walked into the Booderee National Park through a tree clearing onto a beach that looked photoshopped.  Jervis Bay holds the claim to fame of having the whitest sand in the world, and I couldn’t argue with that proclamation. It’s no secret that I love Western Australia, the best state in the entire country because it has thousands of miles of coastline — with nobody to disturb you. But when other states come up to bat with contenders like Jervis Bay, it’s hard not to pander to unfaithful thoughts. I applied more sunscreen than Pamela would’ve her entire career on Baywatch and jumped into the water.  We ventured south, swimming around rock reef and catching glimpses of small schools of fish below us, our shadows scaring them away. We arrived at a cove backed by trees and put on our snorkels. I spotted a small shark hiding in a dark bed of kelp, completely oblivious to me lurking overhead. I called the others over, and we took turns watching him sway in and out of the kelp with the current. After our swim and picnic lunch, Mel opened a map and pointed to a random, small stretch of sand featured at the end of the trail. She shrugged, “Let’s just hike there?”  We followed a wide path through the park, making small talk and updating each other on our lives. Mel, just a few feet ahead of me, let out a shriek.

Inches from her heels, a red-bellied black snake stretched out on the trail. Mo picked up a stick, wielding it like a saber. We moved slowly around it, and sprinted once we felt like we were out of its peripheral. People love to talk about Australia’s plethora of spiders, snakes, and sharks. Though I usually shrug at the sensationalism, I have to admit I’ve seen quite a few creatures that make me think twice about going after a ball kicked into the bushes around here. *Ball is kicked into bush. Ball hangs suspended mid-air, caught in spiderweb. Spider uses 4/8 legs to punt it over the fence.* I still get chills remembering the time Mo and I walked over a deadly brown snake, and the time I almost walked face-first into a web over two meters wide in diameter.

There’s a reason why an episode of Peppa Pig promoting a message of “spiders are totally your friends!” is banned in this country. We arrived at the turn-off for Steamers Beach, a vast cove with small waves breaking onto the shore. Only one other couple claimed the far side beach, and by the looks of it, they took advantage of the remoteness by skinny dipping (and who could blame them?). We walked down a long path of wooden steps overgrown with shrubs and moss until our feet hit the cool sand. We spent the afternoon body surfing, tumbling underwater whenever dumpy waves rolled through. The sand embedded into my hair and ears migrated back to Perth with me the next day. Though none of us wanted to, we walked back to the trail before sunset to avoid meeting other creatures in the dark. My trip to Sydney was meant to cover just Sydney, so I feel a little bad that the highlight of my entire stay was an unexpected side-trip. But with these views and this company, can you really blame me? Where is Jervis Bay? Jervis Bay is a 2 hour and 40 minute drive south of Sydney via the Highway A1 and M1. Taking a bus isn’t recommended, as it’s over a four hour journey.
Camping spots in Jervis Bay: There are a range of accommodation options in Jervis Bay, from campsites to more built-up developments. You can read about them on the Jervis Bay website.
What to bring: Jervis Bay has a picnic area with a gas barbeque. Bring sunscreen, a plastic bag to collect any stray trash, towel, snorkeling gear, and water for hikes.
Other information: Since the ocean is flat in most parts of Jervis Bay, it’s a safe place for weak swimmers and children.