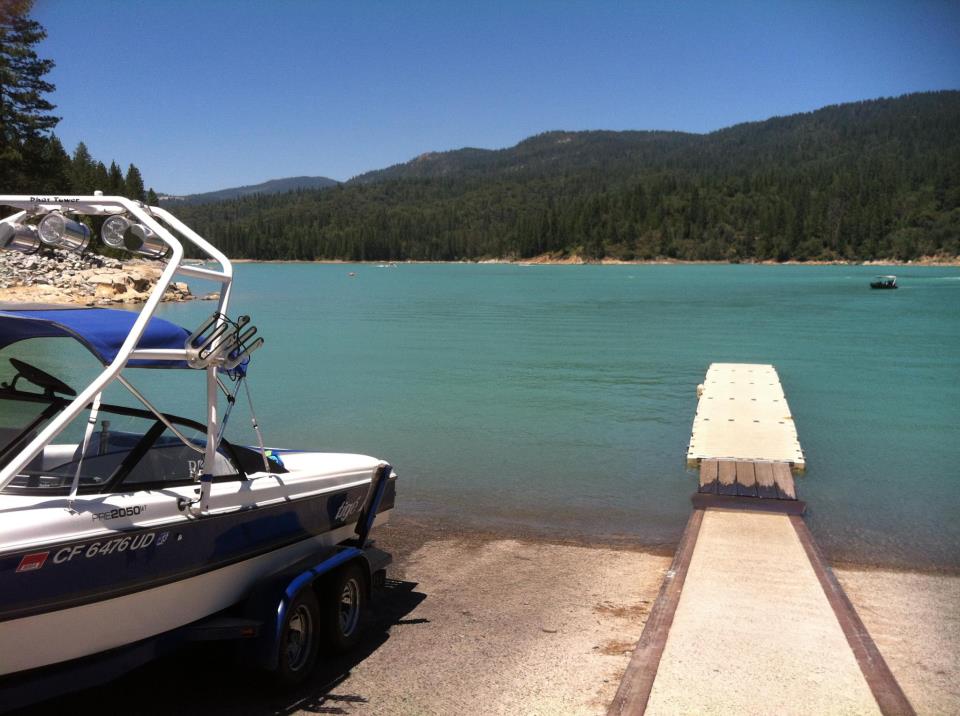 Some friends and I are trying to start a wakeboard team, and as we’ve come to find — the wakeboard crowd is not necessarily the most reliable of folks. From the words of our president we have “between 15 and 65 people on the team.” Basically about 15 people like to ride, and the rest like to clutter the facebook group.

Regardless, a few of us escaped to my family’s lake house up in Bass Lake for the weekend to get a few runs in and have a fun time.

As soon as 4 o’clock rolled around Friday afternoon, I hopped in my Indiana Jonesmobile (aka a white 1997 Jeep Grand Cherokee with gold rims) and made my way up to Glendora to meet up with the rest of my fellow teammates.

True to Indiana Jones, my car does not have air conditioning. And, true to being a summer camp counselor, my face was covered in face paint for “safari day.” Imagine what happened when I got in a car without air conditioning on a hot day + face paint. Melt city, itch. Melt melt city itch. People on the north Interstate 15 were probably staring into my car wondering what disease I obtained and if it’s contagious.

So I finally make it to my friend’s house, and we hook the boat onto his truck. Off we go to pick up two more friends hitching a ride.

In the past, my drive to Bass Lake has taken up to… possibly 6 hours. From San Diego. This time it took us about 8 hours… … … from Los Angeles (that is a long time). Since three of us were on the snowboard team, we’re used to long rides but it was still pretty brutal.

I’d like to note that about an hour of this ride was devoted to letting the BOYS grocery shop for the weekend. We pulled into the grocery store parking lot and after about 20 minutes, the girls remaining in the car were getting pretty restless. I tried to open the door and the car alarm IMMEDIATELY started blaring and the door would not open (every time I moved the lock it would reset itself, giving me a friendly pinch). The boys were probably there for about 20 more minutes and the alarm was only set off one more time.

For about $110 the boys got: ~6 apples, a box of goldfish, three packages of cheese, a pizza+cinnamon stick combo, 18 eggs, a juice box, grapes, spaghetti, sauce, chips, and cheese dip.

I’d like to note that about 75% of the items contained cheese/were straight cheese and that not a single vegetable was purchased. By the time Sunday rolled around I was convinced I was going to get scurvy.

It didn’t help that one of the girls was lactose intolerant.

It also didn’t help that when the boys were wrestling, we heard one literally cut the cheese during the match. Ew.

FINALLY, 3 a.m. comes around and we pull into my driveway. I truly believe the lake feels somewhat magical when you’ve been away from it for a while.

In the morning, we all groggily wake up and put the boat into the water with only a slight delay… the boat had a broken key in the ignition and it wouldn’t turn on. Thankfully, my friend knew how to hotwire it and we were off and running in no time. Like I always say, you can take a USC kid out of the hood… but you can’t take the hood out of a USC kid.

After a few nice wakeboard runs, the water began to resemble something of the stormy ocean waters portrayed in Moby Dick. I was expecting Ashton Kutcher to come down and grab me at any moment like he rescued his mentor in the Guardian, but he must have been busy or something because that didn’t happen.

My friend who can hot-wire a boat also built this contraption… basically a boogie board with a wakeboard fin put on it courtesy of our friend’s girlfriend’s wakeboard.

…cue the hood comment about a USC kid. And contrary to what this surf/boogie board might make you believe, he is not an engineering major.

We weighted the boat with a large fat sack, two smaller ones, and 4 kids pumped with cheese (the weight gain was intentional so that we could have a better wakesurfing wave of course!) and hilarity ensued. It felt like riding a piece of plywood and I faceplanted enough times to clear out my sinuses (which, are full of junk by the way… it happens when you’re a summer camp counselor and children sneeze in your mouth on the regular).

Our friend Ian also decided if you can ride a boogieboard, why not try riding an oar as well?

We pulled into a cove and decided to relax after these shenanegains and were confronted by blood thirsty geese. The geese camouflaged themselves as cute, innocent, obese ducks so we threw them some crackers. After we were done giving them crackers, they had a crazy look in their eyes — like the mask from the Saw movies. They even started drooling!!! They walked closer and closer while hissing and drooling while the ducks in the background calmly chilled. The geese were angry and wanted blood… or crackers. Eventually they found another family down the cove and were fed red licorice (I’m not sure that red licorice is the best choice of food for a goose?). Then they began hissing at their new family and a girl started throwing rocks at the geese (and actually hitting them).

I don’t like geese, but I abhor mean kids. Doesn’t she know that striking animals is the first signal that a kid is going to grow up to be a serial killer?! I couldn’t hide my camp counselor side any longer and yelled at the possibly sociopathic girl, “Hey! No! That’s mean, stop throwing rocks and leave them alone!” I think I legitimately scared her more than the geese scared me.

After the cove, we meandered back to the house and hopped in the hot tub. Then the spaghetti and pizza… and cinnamon sticks were cooked. James ate about 50% of the cinnamon sticks before anyone else got one… we hope he gets cavities. I don’t think any of us have ever had that many carbs in one sitting -____________- nor will I ever want to again.

In a lethargic stupor, we decided that going for a night swim would be a brilliant idea… but the excursion soon turned into a photoshoot with only one person actually jumping into the water.

The next morning we rose early to get some good wakeboarding in — unfortunately my camera had died at this point and I brilliantly forgot to bring my charger. But trust me, it was awesome. Bianca stood up on her fourth try for the first time ever! We relaxed for a bit on an island in a cove and befriended a cute duck. Ducks are so much nicer than geese, by the way. Ducks are definitely the hippies of the world. Geese are like swamp gangsters.

Unfortunately, our short trip had come to an end and we all made it back to LA in one piece (miraculously). I’m not too sad though, because Bianca and I will be back here for a week next week 🙂