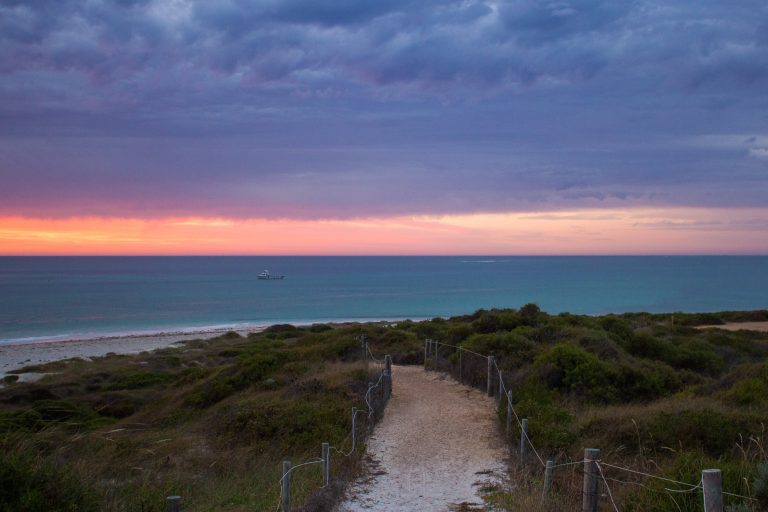 If you’d asked me in November if I was “hooked” on kitesurfing yet I might have jabbed said hook in your left eye. Friends, acquaintances, and old men waiting to use the beach shower always asked with some variation like this.

“Waaaow, nice day for a kite hey? Are ya hooked yet?”

I thwarted these questions by pointing off into the distance at a fallen kite or wrangling with my wetsuit zipper.

Because hooked? Meh. More like frustrated and still doing it because I’d already sunk so much time and money into this sport that I was at the point of no return.

It’s not too easy to get hooked on a sport that causes so much heartache and secondhand embarrassment for everyone watching. I could feel the beach collectively cringe during the first few days I got on my board. When you added up the gear, the money, the time, and all the crashes in the water, hooked is the last thing I felt – unless you counted the rash around my ribs from being dragged by an ill-fitting harness.

One afternoon, I got a message from my friend Brian who had two spots open up on his kitesurfing tour. He asked if Moritz and I wanted to go.

A trip with nonstop kitesurfing… this could actually be my light at the end of the dark, windy, cold, sandy, tunnel.

I replied with an emoji filled yes.

Over the next eight days, I hung out with tour guides Martina and Brian, along with the rest of the group on their Adventure Kiting WA tour. We traveled up the coast of Western Australia from Lancelin to Shark Bay in a two car convoy. Our first stop on the tour was Lancelin. A small town mildly famous for massive white sand dunes and holiday homes. Lancelin seen from the road always gives me a Truman Show vibe, there’s an entire town but no people. Any semblance of life is usually seen out in the water or at the local beer garden. Locals of Lancelin, while rare, are always friendly once you get a chance to speak to them. We had an initiation kitesurf session at Wedge Island, a small rock formation jutting out from the white sand beach. The wind howled on our first day at 25 knots, overpowering me on my 7 meter kite.  The force of the kite intimidated me while I rode, so I crossed my fingers for a little less wind over the next week.

The bay picturesque place for standup paddleboarding. Since the seabreeze only kicked in every afternoon, Adventure Kiting WA provided SUP boards and snorkels to quell any boredom.The board tapped against the water as I paddled near a small island of birds, who took flight as soon as I came too close. Disturbing their peace, my calmness was overridden by guilt. We spent the afternoon taking turns on the SUPs while Moritz went out for a surf. With standup paddleboarding, kitesurfing, snorkeling, surfing, and swimming, the bay is a haven for water-loving Western Australians. The wind on the second evening of the tour unfortunately wasn’t more than a light breeze.

But this didn’t stop a few people on the tour from pumping up their kites with the vigor and enthusiasm of a pack of golden retrievers. They came from foreign lands to Western Australia specifically to kitesurf, and kitesurf they would – wind be damned. I ride a 7-meter kite that needs at least 17 knots of wind to fly my body out of the water. Always a skeptic, I folded my arms and shook my head at the prospect of kitesurfing in Lancelin this evening.

“There’s not enough wind.” I nagged. Likely with a nasally voice like a teacher from a Nickelodeon cartoon.

That didn’t stop the others. Optimists, they launched their kites and set sail into the Indian Ocean. One by one, their kites dropped out of the sky. I sat firmly on shore, my mouth contorting trying to hold the “I-told-you-so” in.

A few kitesurfers had to walk their kites underarm back to the campsite while another was stuck a few hundred meters offshore. His kite was a small speck in the distance, and I used the zoom lens for my camera to get a closer look. Waterlogged, the kite crumpled into a soggy origami with no prospect of relaunching. The vibe felt sharky. Luckily, a local fisherman brought him back to the beach via boat. If I’d went out, that would’ve been me.

(Fortunately, on our way back from the tour, we stopped in Lancelin again where I had a second shot at kitesurfing in the bay. I zipped across the lagoon to the waves and back, stoked for consistent wind.)

It was the Goldilocks experience with kitesurfing. The wind was first too strong, secondly too light, and finally just right. The spot was a perfect fit for flat-water lovers and those looking to kite through a few waves. One night, it was Martina’s birthday. Her brother wanted to surprise her with a cake and some alcohol to celebrate. We went over to the local liquor shop, where three locals were sat at a wooden table near the cash register. Essentially, this shop works as a makeshift bar for those who want to pay shop prices but then have a semi-social experience.

That, or they’re all alcoholics who can’t wait to get home to crack open that beer.

Brian spotted a tacky bucket filled with sugar-filled shots. The kind with questionable names like, “Cowboy Raspberry,” “Cowgirl,” and a sure to be crowd favorite, “Pancake.” His eyes widened, “We need this!”

I cringed at the waste of plastic and elbowed Moritz to talk Brian out of buying it. Moritz was too busy being fixated on a rum-filled shotgun.

Moritz grabbed the shotgun. Brian had not one but two buckets of Bucchus Party Shots under his arms. Completely overwhelmed by the stupid decisions about to be made, I convinced Moritz to put down the shotgun but was too late to intervene with the party shots.

During this whole fiasco, the cashier tried to make small talk as if he were a headache-inducing-liqueur connoisseur.

“No way!” I protested. Brian forgot his credit card and was mid-swipe with mine. “You said earlier that they were only… $65.”

Bewildered, the cashier protested for a minute before shrugging his shoulders and selling it to us for $65. He brought the buckets over to the table and started handing out our newly purchased shots to the people already five drinks deep.

The red-faced drinkers raised their liquid cowboys up in the air and poured them back without blinking.

In the car, Moritz and I had a moment to ourselves. I whisper yelled at him in the way that only couples do, “We should have stopped this madness. Did you see how much plastic is wasted in those buckets!?!” Moritz rubbed his temples, “Yeah. Agreed.”

(Longtime readers will know I’m currently at a long-raging war against plastic.)

Back at the campsite, we inflicted irreparable damage on ourselves and the environment. Laughing and staying up late talking about random things, I knew this would be a great group to get that elusive hook on kitesurfing with. Does this sound like an experience you’d enjoy? You can now book a kitesurfing tour with Adventure Kiting WA and get $10 through me! Read more about it on my  “Book a WA Kitesurf Tour” page and send over an email if you’re interested and want to learn more.

Where to Camp in Lancelin: We stayed at the Lancelin Caravan Park, where the site cost $11/per person/per night. There are a few long-term residents at the site, so it doesn’t have a traditional camp feel. The site has huge, clean bathrooms with hot showers, a BBQ area, sinks for washing dishes, and various types of powered/un-powered campsites. Where to eat and drink: There are free gas barbecues scattered around the town that are perfect for cooking hot meals. Endeavor Tavern has an oceanfront beergarden and often features live musicians. It’s a great stop for a midday drink or post-kite brew. Transportation: While many kitesurf spots are accessed with a 4WD, you can walk to the best ones from paved parking lots. Maybe Kitesurfing isn’t So Freaky After All: Coronation Beach
Kitesurfing with Sharks in Shark Bay
Western Australian Road Trips: The Weird and the Wonderful