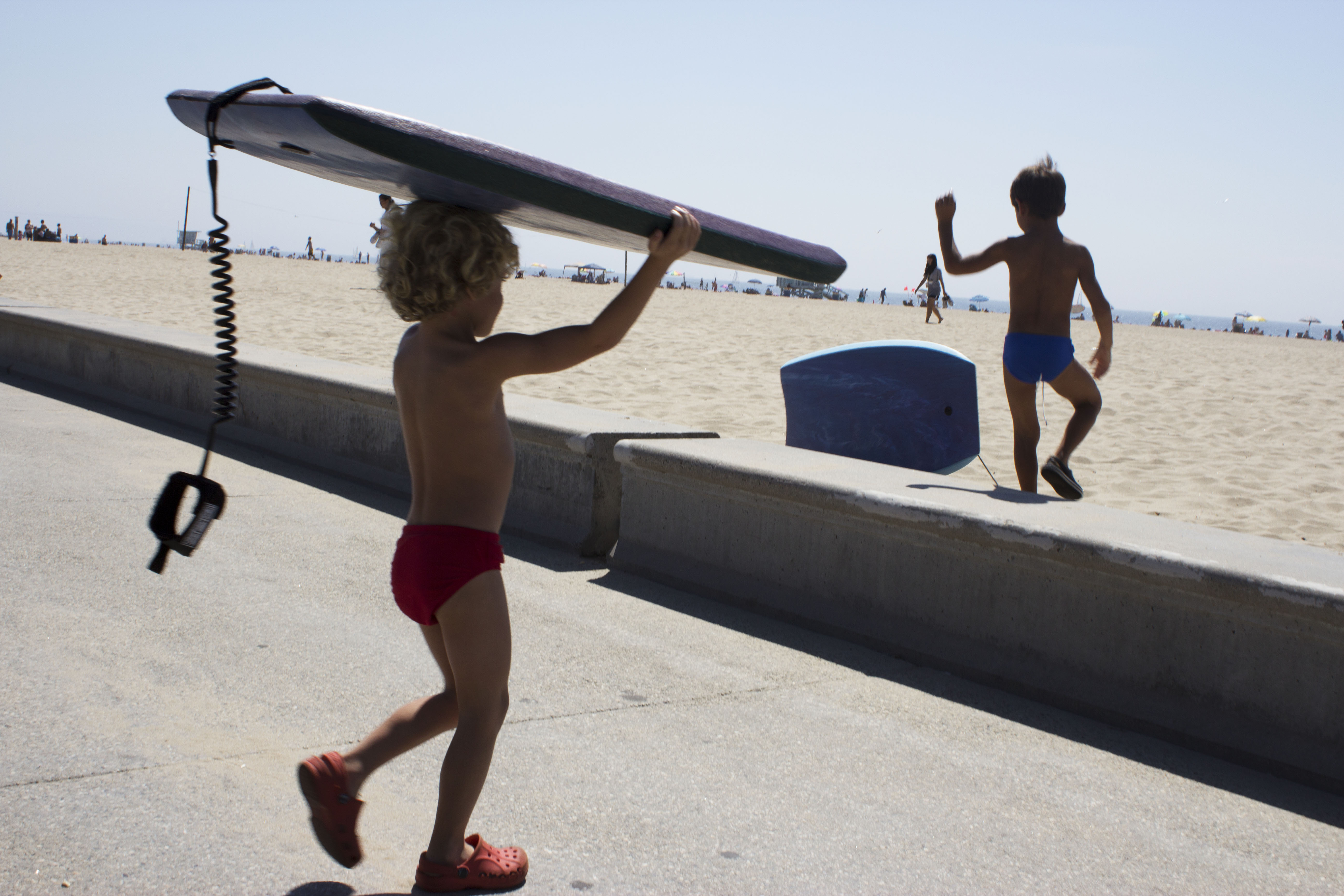 That’s the sound I hear every time I journey to Venice Beach, and I must admit — I don’t hate it. What is that noise? It’s the squeal of a small Jamaican man about to jump from a two foot chair onto a pile of glass. Don’t worry — he survives every time he performs this stunt, and to this day I’ve never seen the man bleed. I’m guessing it’s due to the hefty calluses that would put my dad’s to shame. But to be honest, I’m more concerned for his liver than his feet because the endless amounts of alcohol bottles he jumps on had to get emptied somehow! 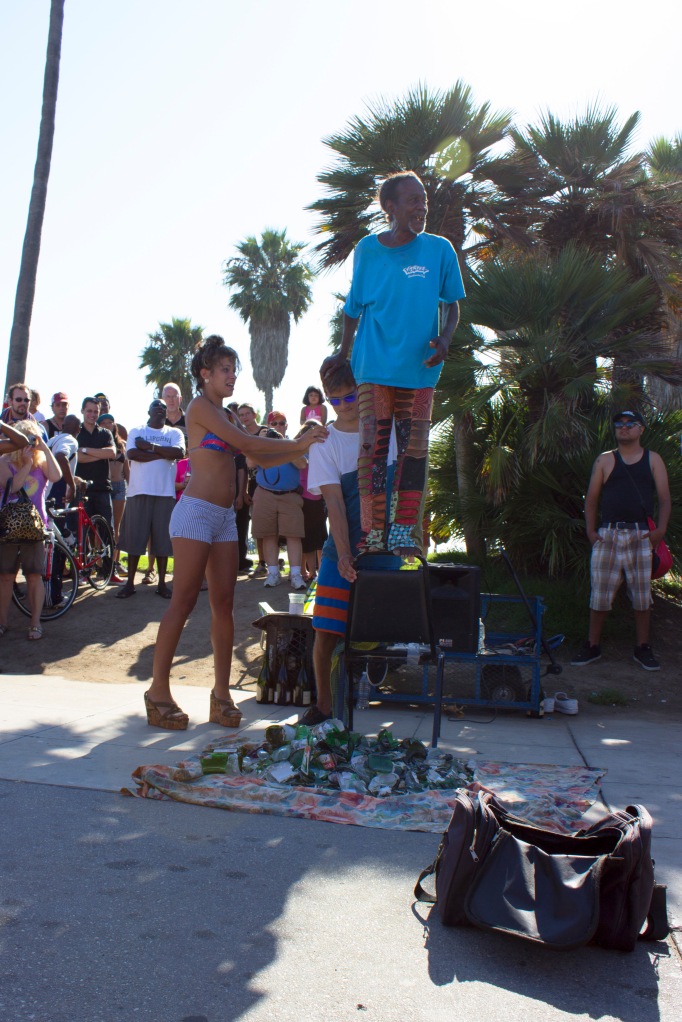 Venice Beach is a dirty place. I don’t recommend trying to spend a relaxing day tanning on the beach due to the simple fact that you might get stuck with a contaminated needle if any bare skin touches the sand. If you want to hop into Venice Beach for the day and back out again, consider going on a self-guided tour of Downtown Los Angeles.

However, if you are looking to have an experience that is filled with action, color and excitement, then head on over and enjoy the stroll. I recommend bringing rollerblades for the more coordinated folks. 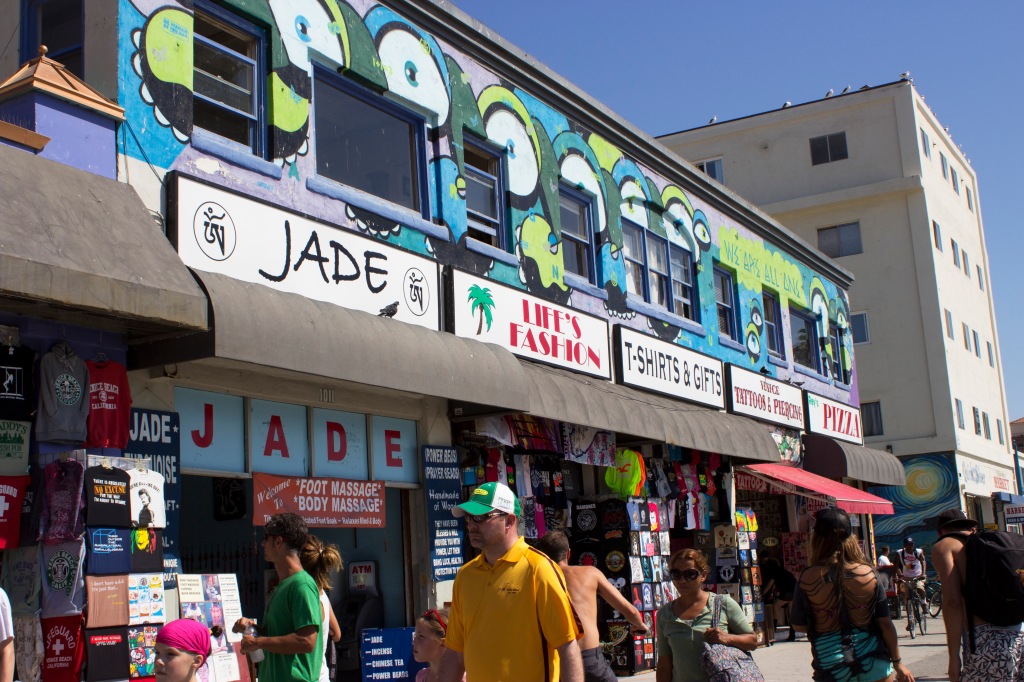 This weekend, a few friends and I went down to see the inevitable commotion take place in Dogtown and do some people watching and street art hunting. The thought struck me — what if the people in Venice Beach were normal by society’s standards? What if there were no backpackers, no Europeans dressing their children in nothing but Crocs, no people begging for illegal substances — would you even be able to tell where we were? Sure, some obvious landmarks such as the skatepark, the art walls, the gym, and the unconscious man lying face down on the sidewalk give Venice’s identity away, but the crowd it draws encompasses the true heart of Venice. It’s a place that is defined by the people who are there. 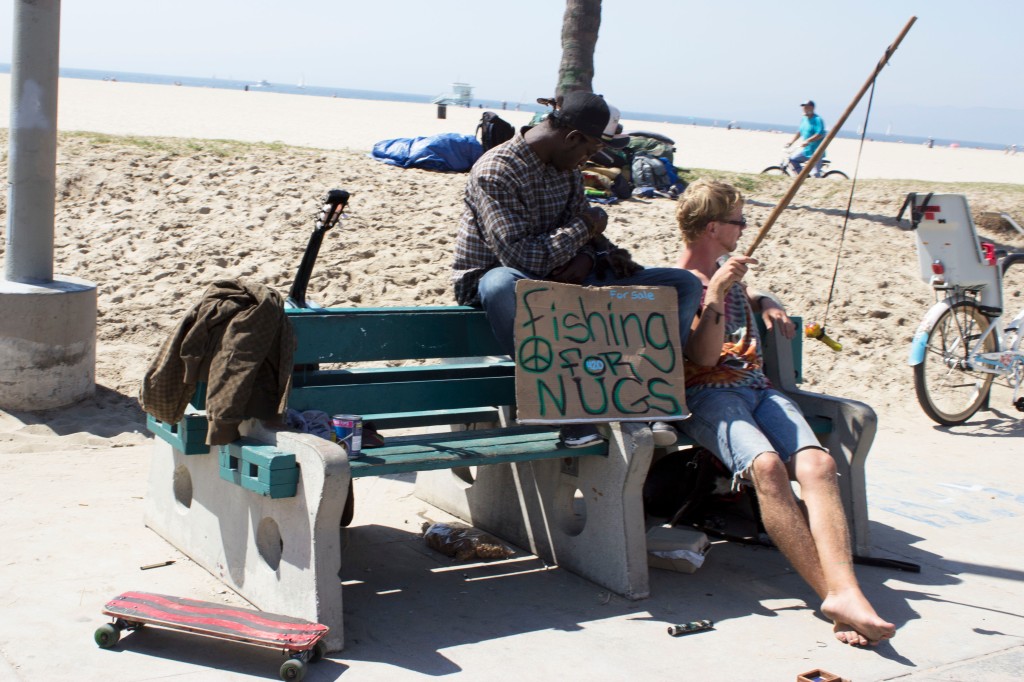 We started our day just south of the Santa Monica Pier (another favorite Los Angeles spot) and simply walked along the sidewalk making our way through the heart of Venice. Chelsea and Dimitri  conversed a little while Anthony (who made his cameo appearance in my downtown Los Angeles post) and I acted like Crocodile Dundee and Bear Grylls, hunting for tags of graffiti and street art. We found a lot of it — too much to ever fit into a meager blog post! 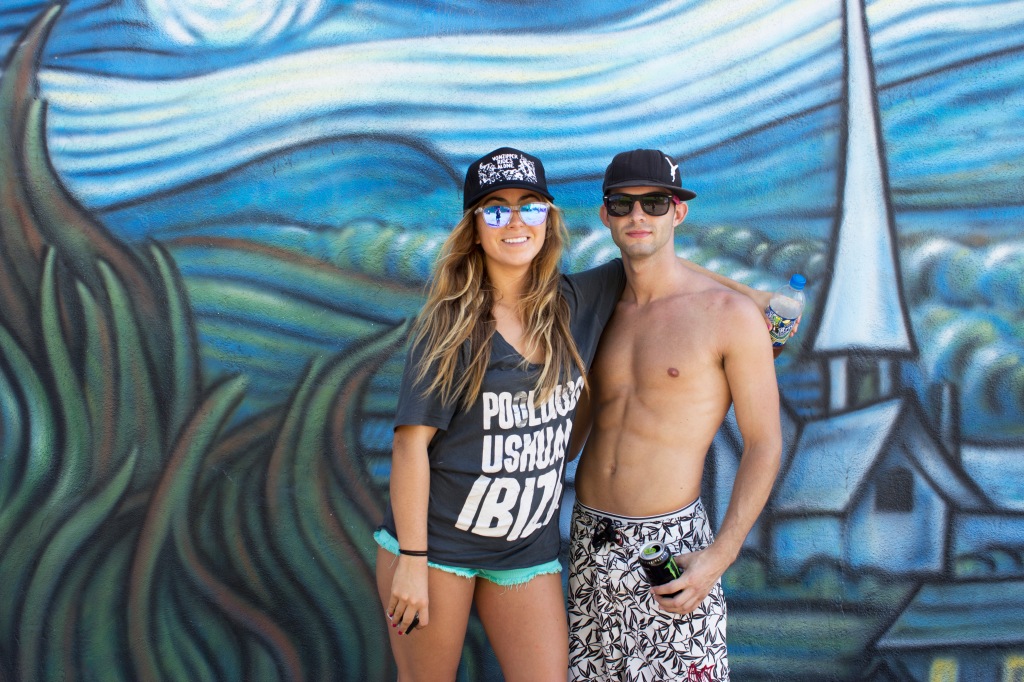 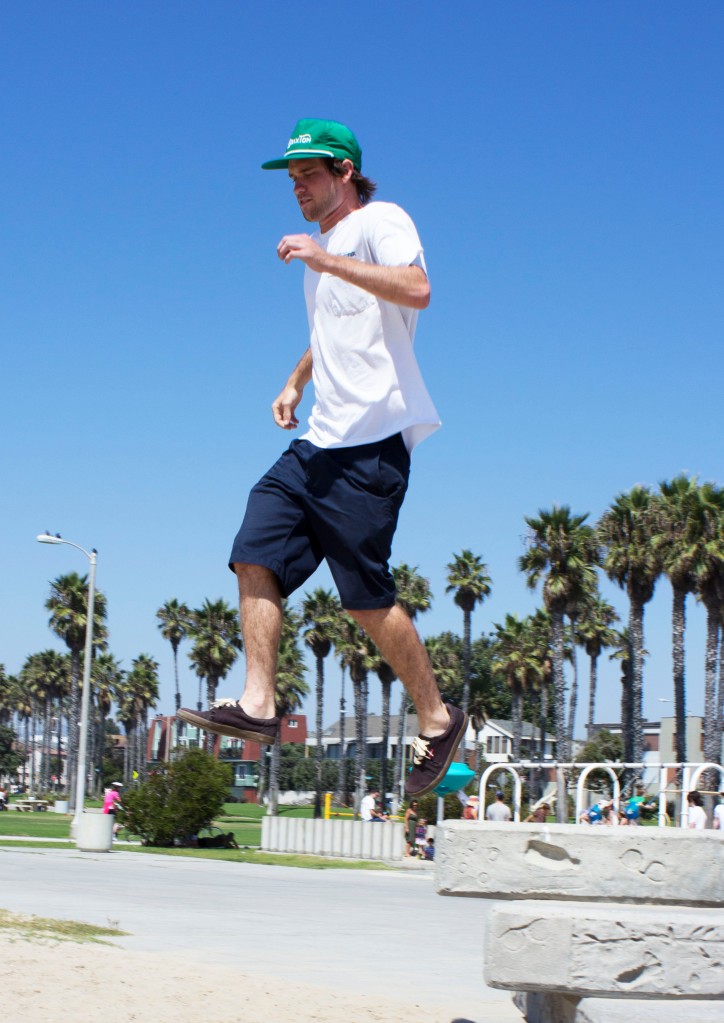 Chelsea nomming on that pizza slice, waiting for the sketti.

After our alter egos wore off, Anthony and I spent the rest of the day asking “would you rather?” questions while traveling down the sidewalk.

“Would you rather have a gallon of M&M’s, OR a Reese’s Peanut Butter Cup the size of your face?” I challenged.

“It’s layered proportionally to a normal Reese’s cup, so it’s stacked throughout.”

You can imagine how the rest of the proposals went. Anthony has a tendency to ask a lot of questions before deciding on anything as important as imaginary candy binges — if he’s going to get hypothetical type-2 diabetes from a sugar overload, he at least wants to know how.

I spent some time researching how to obtain a permit to paint on the Venice Beach Art Walls — apparently it’s pretty easy, but the walls are only open for painting on the weekends and the permit givers corral the n00bs to the smaller walls where we can’t cause as much of an eyesore. I might take a day trip sometime soon and create something of my own. Aerosol is a medium I’m not too comfortable with, so it’ll be an interesting experience. I have to be careful not to accidentally aim the nozzle at my face  and pepper spray myself with neon paint (again). 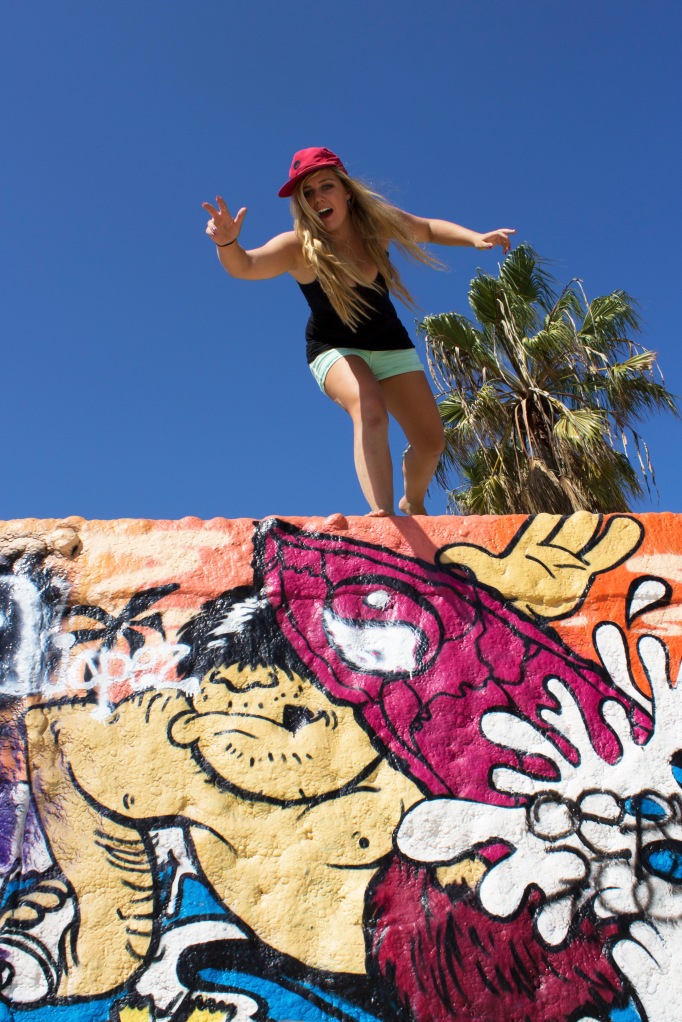 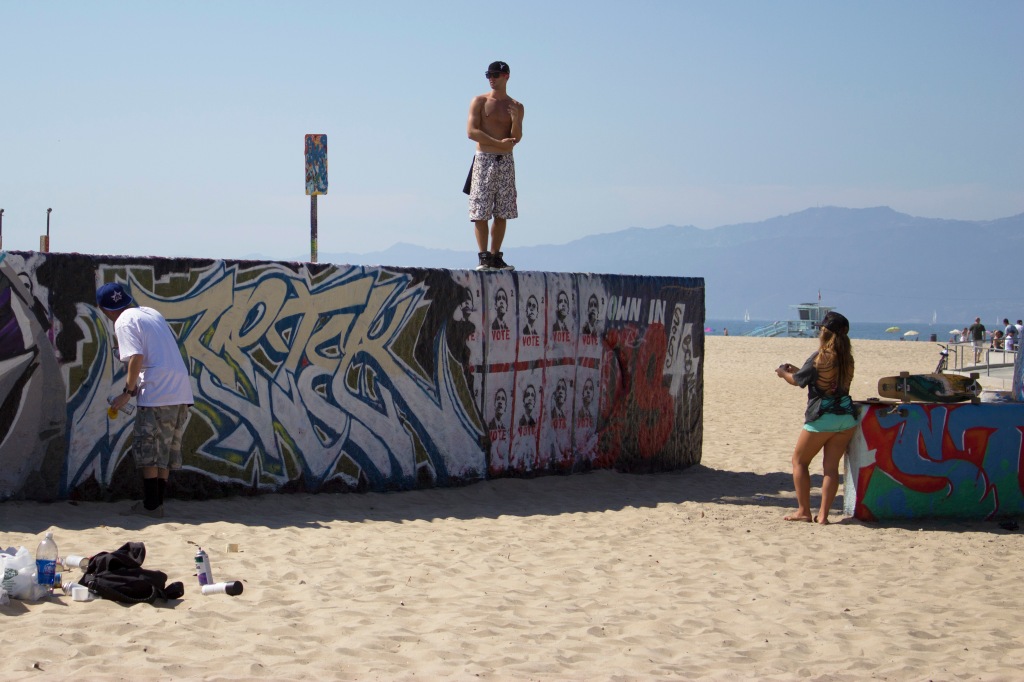 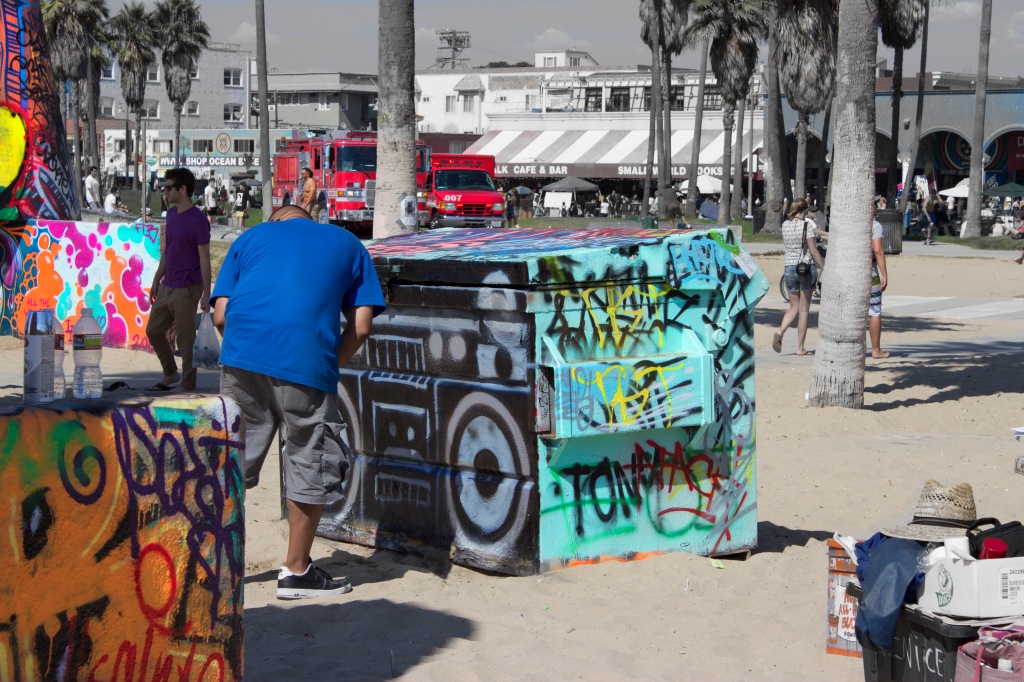 A small pan to the right reveals skaters taking turns shredding the gnar at the Venice Beach skatepark. I personally enjoyed watching the little kids drop in at the skatepark, and they deserve their own movie: The Puppies of Dogtown. 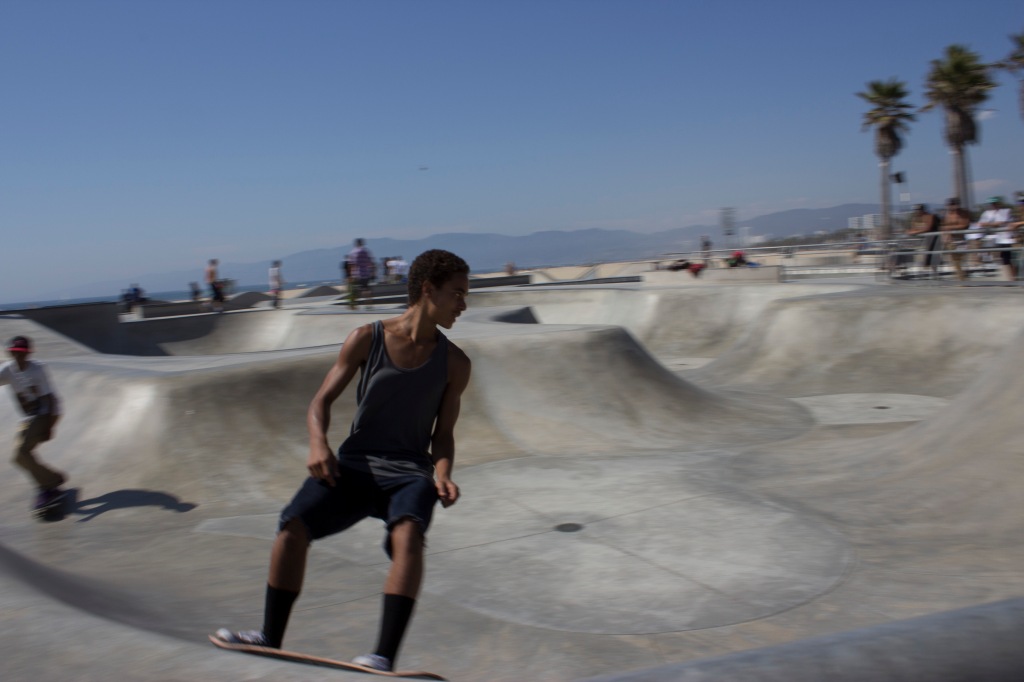 Can you spot us as spectators?

At some point, a few people gathered around an injured hula hooper who collided into a bicyclist gone rogue. Help arrived after a few minutes and the hooper seemed to be overall okay — if not just in a bit of shock. 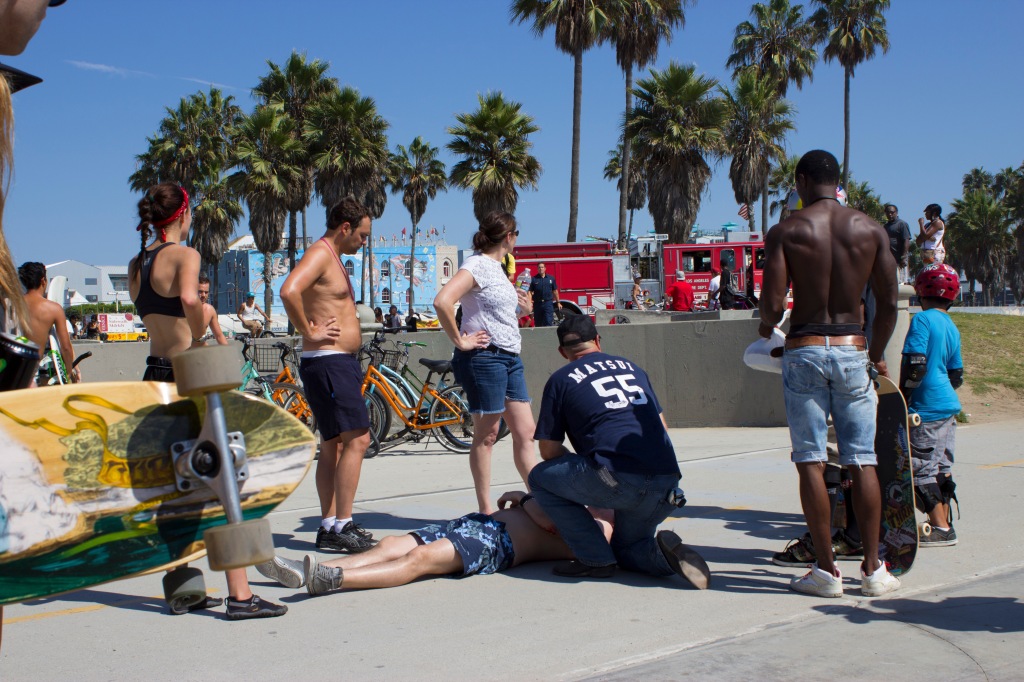 We traveled back to the car using the alleyways, straying only to to join the drum circle taking place on the beach. I tried to participate by bobbing my head to the rhythm but the truth is, the drum circle didn’t have any. People banged their drums in a wide eyed frenzy with a spaced out look into the distance. Everyone once in a while, someone would yodel to keep the beat on track but the yodelers efforts were futile. 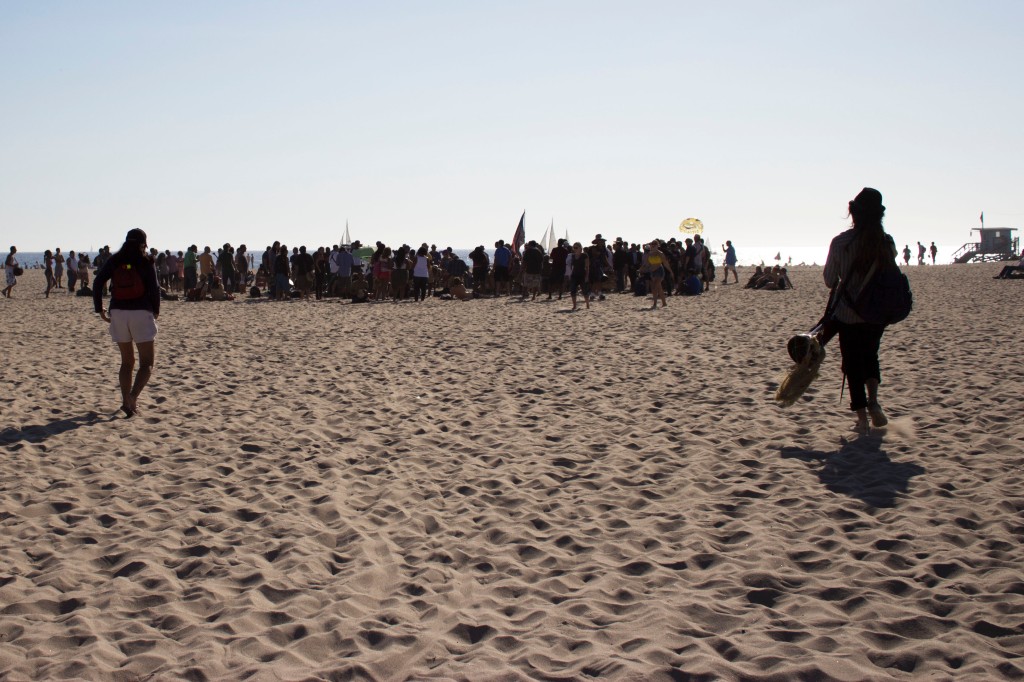 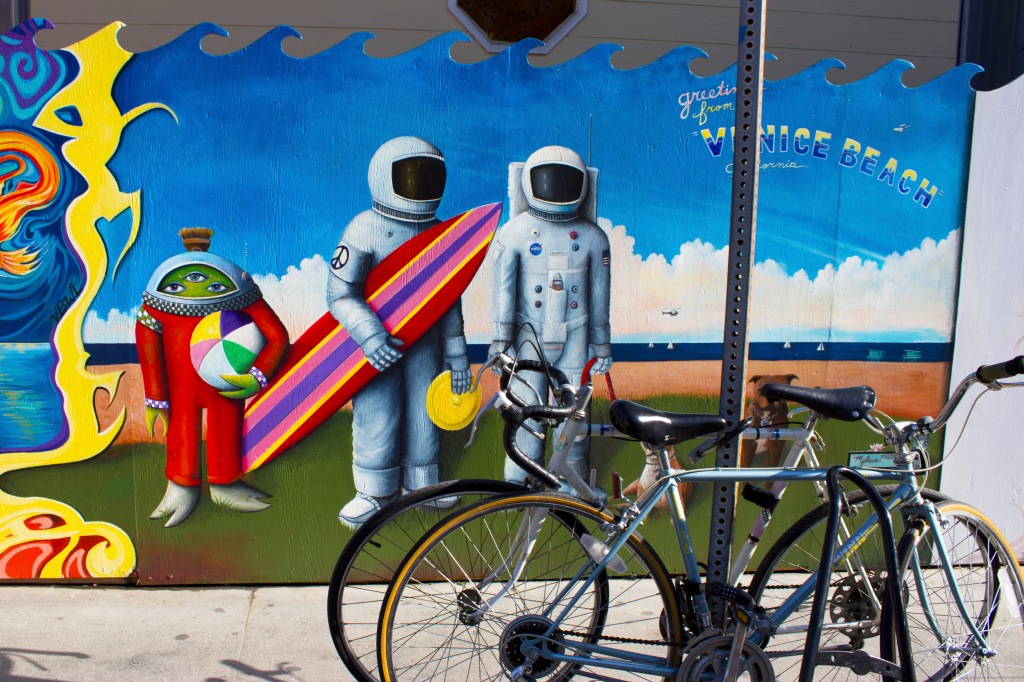 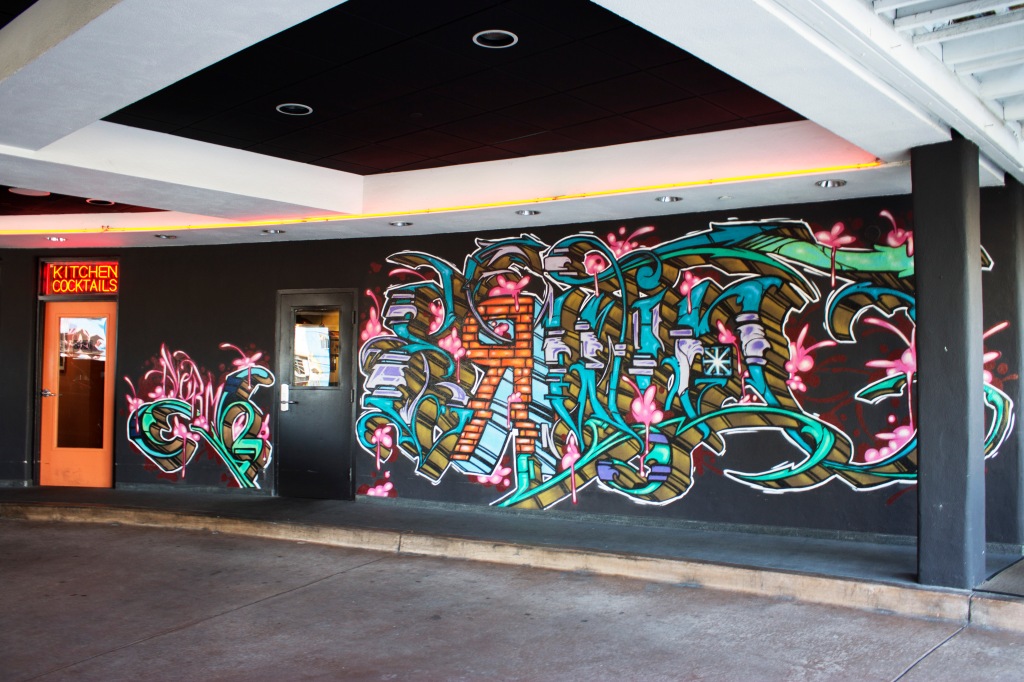 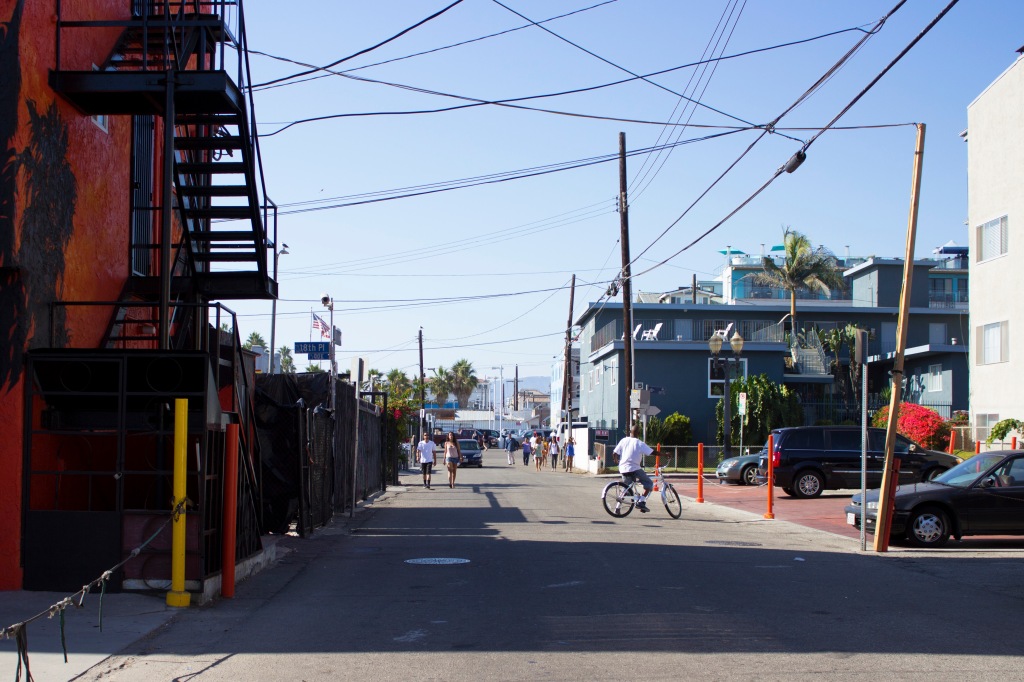 A pit stop was needed over at UCLA to drop off Anthony, which Chelsea and I took to our advantage — he has a pool, and swimming sounded superb. We went for a quick dip and buzzed back over to USC all while screaming things out the window. Chelsea and I feed off of each other’s silliness and spent the whole ride back screaming “Kiss her!!!” at couples walking along the sidewalk. Perhaps we went too far after screaming, “Kiss him!!!” at a pair of fraternity brothers, who then proceeded to walk at an arms-length distance from one another. Some people are just shy I guess!

On an ending note: here’s a shoutout to the animals of Venice who help create the culture too. 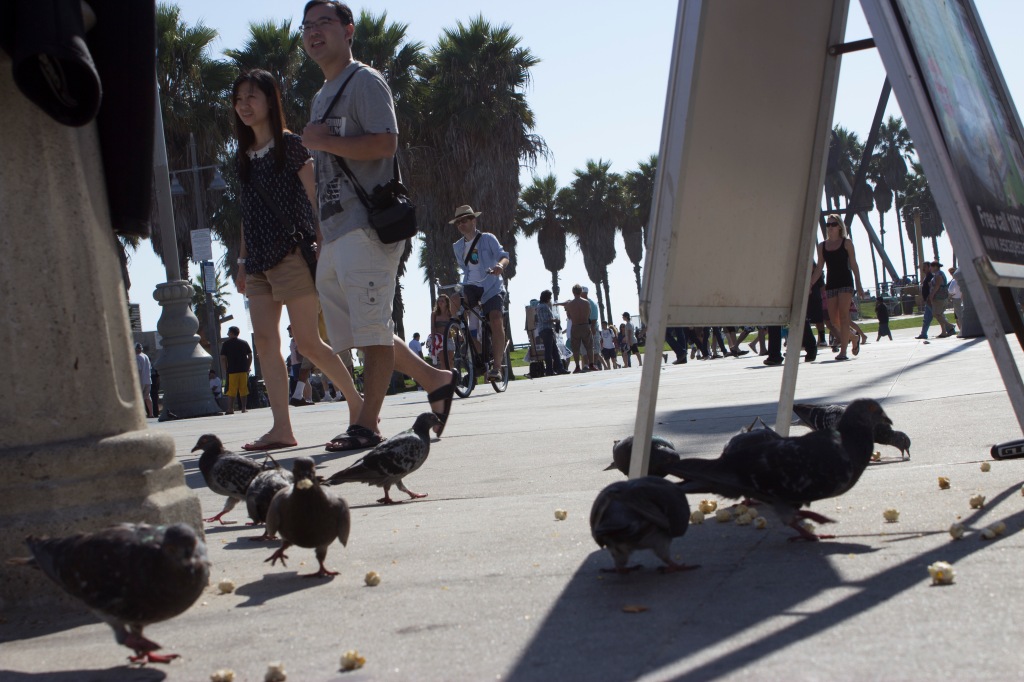