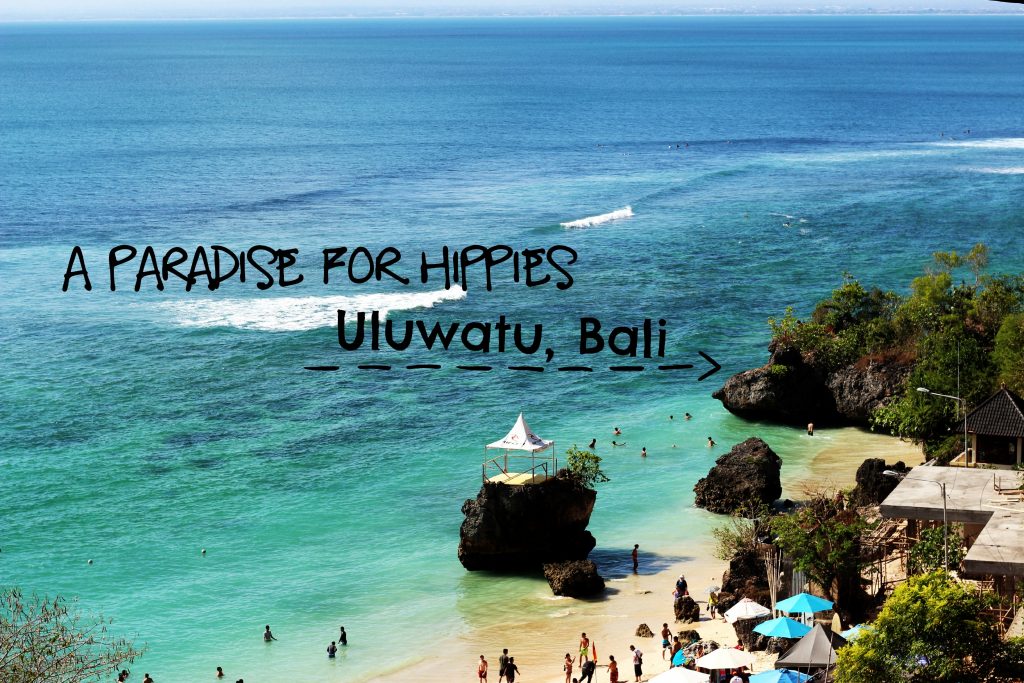 A Paradise for Hippies: Uluwatu, Bali

“A question only an American would ask.”

This was Moritz’s response after I asked Aereck, our driver taking us to Uluwatu, if he knew anyone who had been killed by a coconut. Aereck responded that his neighbor had died from being hit by a falling coconut. When I remarked about how tragic that was, Aereck shrugged. “When it’s time to go, the gods will decide. You can die of anything if the gods say so.”

He went on to explain that the most important thing about death is that you die in the place where you are born. The Balinese believe in reincarnation, and if you leave the world from the same place you’re brought into it, you’ll return there as an infant in the next life (well, if you’ve been good!). This explains why babies are so sacred in Bali – they carry the souls of their ancestors.

With this to think about, Aereck dropped us off in Uluwatu, a trendy, surfer-infested beach town located on the Bukit peninsula of Bali. It’s home to some of the worlds best – and heaviest – reef breaks. We pulled into Bingin, one of the Uluwatu neighborhoods we’d call home for the next few days. Our neighborhood was guarded by an elderly-woman gatekeeper… who held a gate made out of PVC pipe, cement, and a piece of rope. The gate worked as a pulley system, and multiple times I saw her DROP IT ON PEOPLE’S HEADS.

Her mood was volatile – one day she’d remember Moritz and I and not charge us the 1000 rupiah entrance fee, sparing our lives. The next? She’d try to smash our skulls by dropping the pipe on our heads as quickly as possible. Coconuts or elderly people – is there ever a time in Bali where you don’t need a helmet? Rumors claim that she will ease up on the gate roulette if you buy a bootleg DVD from her.

We fell into a routine for the next few days, with Moritz paddling out to catch some waves (usually at Bingin or Ulus) while I stayed shore-side for sun salutations. When the waves were smaller, I paddled out to the right hander of Padang Padang… but seeing as most days had the waves barreling overhead, I was happy to enjoy the waves from a safe distance. Uluwatu was really beginning to feel like a true vacation, with evenings concluding with a sunset and crisp bottle of Bintang. We’d join a group of travelers for a fun concert on the beach. Moritz often made a game out of grabbing two travelers and bringing them together, “Woah, what do you know! HE smokes cigarettes… and HE smokes cigarettes! Be friends!” He’d force the victims into an awkward conversation and leave them alone to fend for themselves. Later we’d hear, “Yeah seriously man… there’s no downside to smoking, I can hold my breath for soooooo long…” One night, my eyes popped open and I just knew –  Bali Belly. No, this isn’t a type of candy as my dad’s friend thought (hmm, sounds delicious! Like Jelly Belly!)… it’s basically Satan trying to show you he exists inside of you and suddenly wants to be free by any means necessary. Avoid Bali Belly at all costs! Avoid drinking the water! Avoid anything dairy! Avoid close contact with animals! Avoid everything!

Blame the street food or methanol spiked margaritas – either way, it sucked.

Luckily, Uluwatu is home to a plethora of yoga classes. All are set in a beautiful location, and all are used to travelers resting in child’s pose for the entire duration like I had to post Bali Belly night. My favorite place to practice was at Swamis Stay and Cafe, where you could overlook the incoming swell lines of Bingin and Impossibles whilst doing your asanas. Afterward, it’s just a short flight of stairs to their cafe that serves organic vegetarian food. I also had a few beautiful yoga sessions at The Temple Lodge, where the local dogs will claim your mat if you stand for too long. The prices seem to be standardized at 100,000 rupiah per class.

You can’t go to Uluwatu and not see the famous temple that hosts a nightly Kekak fire dance – a Balinese performance filled with fire, tragedy, and comedy. The chanting can be confusing at first, but eventually the whole audience is involved in a fun and adrenaline-filled performance. One bit of caution: Beware of the monkeys. One wrapped its little fingers around my flip-flop and had a death grip on it. It’s a hippy expat’s paradise here. Honestly. Every day was filled with great food, amazing waves, and short adventures to the next surf break over. On our last night, professional surfers poured in by the boatload because Ripcurl decided that the waves were big enough to launch it’s “It’s On When It’s On” Padang Padang Cup surf contest.

During a tasty dinner at Buddha Soul (#23434 amazing restaurant), we were sat next to Bethany Hamilton and Flynn Novak. I’m pretty sure Moritz and I didn’t talk for the first twenty minutes of our meal, simply eavesdropping on their conversation. Unfortunately, our new best friends arrived with a couple that had two extremely rambunctious children.

The children, aged 4 and 7, began throwing rocks at fellow restaurant goers and screamed at the top of their lungs nonstop. Their mom, trying halfheartedly to control them, said things like, “please don’t throw rocks at the window.”

*Child threw rock at lightbulb – hey! at least it wasn’t the window!*

She followed the children around the restaurant with a plate of food, trying to spoon feed the seven year old.

I moved my purse and brand new camera out of the way as the Tasmanian devils then proceeded to splash water on me and my belongings. This delighted them, and they began to shriek at such a volume that would have surely made the drinking glasses explode had they not manually done that already.

The dad made a last-ditch effort at controlling them, saying, “If you don’t behave – I’m going to take you to the White Monkey.”

“Wow, we should say something.” I told Moritz.

And before we could brainstorm things to say, (excuse me – could you please take your kids outside, they’re vandalizing things…) Moritz yelled, “OI!” – the Australian exclamation that addresses everyone who doesn’t want to be addressed – “SHUT UP!”

The entire restaurant fell silent. Every single one of Uluwatu’s thousands of roosters held in their squawk.

“Did you just tell my kid to shut up?”

“I’m going to slap you in your head!”

The dad stood up and towered over Moritz. “I’m going to SLAP you in your head!”

Moritz remarked that it sounded painful. Then, the dad began interrogating Moritz. “What country are you from bro?”

When Moritz spoke, the dad couldn’t pinpoint his accent and became confused. (He’s German but has lived in Wales, New Zealand, Australia, and has an American girlfriend. So, it’s a little hard to guess).

“I ASKED what country you’re from, bro? This is Bali bro! THIS IS BALI!” The wife echoed, “yeah! it’s BALI!” He continued, “Are you a local? Did you just get here? You’re not a local bro, you don’t live here! Do you know who I am? I OWN A SURF SHOP!”

I feel obligated to point out that this man was a white, blonde, American. Also, the bit about the surf shop confused us. I imagined myself standing up and screaming, “THIS IS SPARTA! I AM A BAKER!” in retaliation, spiking him in the chest with a baguette.

Moritz explained that we were just trying to have a nice meal and wanted everything to settle down. The man raised his hand one more time, trying to get Moritz to flinch. Eventually, he sat back down with his pro-surfer buddies and got back to his meal, glaring at us occasionally.

Everyone ate silently… and on the plus side, so did the kids.

Of course we can see why the papa bear raged at us, and perhaps the ‘shut up’ was a bit harsh. Still, we were happy to head out of Uluwatu the next day, sure that if we stayed around, the White Monkey would find some way to get us. Our driver drove like a madman to the airport, and made a comment that the “Balinese drive crazy because they’re going to be reincarnated.”