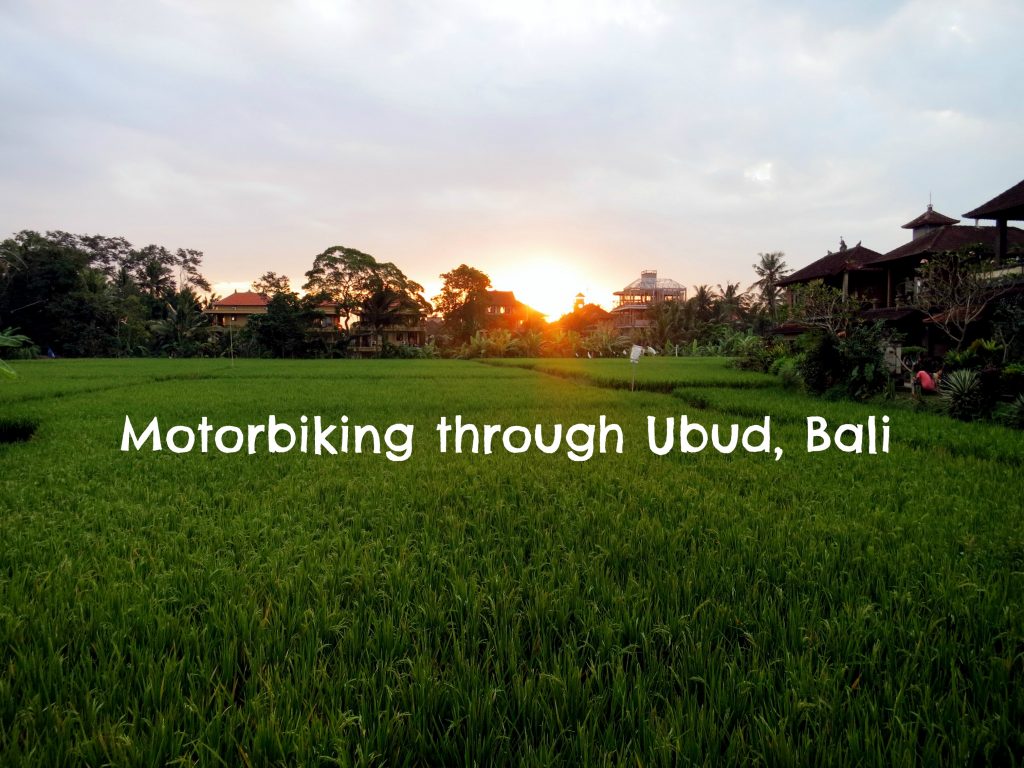 “We need to make sure that we always bargain. Never take the first price!” I lectured to Moritz, trying to drill it into his head as we stood in the taksi line of Denpasar, Bali airport.

“Okay.” I snatched the price ticket and walked over to the line of taksi drivers… Moritz trailing along with his mouth open in disbelief.

Oops, looks like the whole bargaining thing would be a lot harder to get used to than we originally thought!

We arrived at our first hotel close to the airport which doubled as a church/furniture store. The walls of our room were filled with “Jesus loves you” posters and the beds, chairs, and tables all had price tags on them. Later, we learned that the owner used to run a successful furniture exporting business that collapsed as an effect of the Bali Bombings in 2002… forcing him to make extra money through more creative means.

In the morning, we high tailed it to Ubud, and Moritz got to try his hand at bartering. The taksi driver quoted 600,000 rupiah (over 4x the suggested price).

The taksi driver said, “So much traffic.”

Now, I got a chance to roll my eyes.

Every hotel in Ubud that we walked into was completely full. We found a stout man on a scooter and asked him if he knew of a place to stay. Nodding, he signaled for me to hop on the back of his scooter and we took off going the opposite direction of a very busy one-way street. In my first minute of Ubud, I realized that the loose traffic rules in Indonesia are more like suggestions. One-way streets merely hint that you go with the flow of traffic, but it’s no big deal if you don’t. Walking around the city center, we passed by Monkey Forest – which was more of a free-for-all than sanctuary. Moritz and I were horrified as people threw and gave food to the monkeys, and then seemed shocked when the monkeys aggressively frisked them for more. The monkeys were so bold, I was surprised that they didn’t perform cavity searches. We decided against paying the admission fee after seeing an employee bat a monkey away using a Pringles can… and then threw the Pringles can on the floor. It sparked a theme that I’d see throughout the rest of my trip through Indonesia: nature being mistreated. Ubud holds the Balinese reputation for being one of the most culturally rich cities in Indonesia, and in many ways, it’s easy to see why. In front of every building, small boxes of offerings adorn the entrance and incense smoke swirls around inside. Hindu statues crowd the walkways. The Balinese perform their (many) ceremonies as if onlookers are invisible to them. For them, religion is the utmost priority. Wanting to see the countryside, Moritz and I hopped on a motorbike and followed our homestay host (who we dubbed, “Tuco”) out of the chaotic city center. As we rode past small shops and private rice terraces, I thought “Now this is the Bali I want to see!” Leaving early in the morning, we’d be one step ahead of the mass tour groups throughout the day – making our first stop at the Tegallalang Rice Terraces feel intimate and culture-loaded. It’s constantly touted as being one of the top things to do around Ubud, and it’s not hard to understand why once you catch the first view of the terraces. Green is basically the only word to describe the experience. Tuco shook his head in frustration and motioned for Moritz to lift up his arms. Moritz was failing miserably at tying his sarong, a necessary clothing item for entering the Temple of Holy Springs. Tuco snatched the rectangle piece of fabric and quickly wrapped it around his waist. Now, Moritz was properly suited to enter.

Inside, Balinese locals cleansed themselves in the holy water derived from a natural spring located in the center of the temple. They performed the ceremony completely oblivious to onlookers – again, as if all of the staring travelers were nonexistent. When I asked a local why they Balinese don’t mind being watched during religious ceremonies, he was confused. “It’s not like we are naked!” He gawked, and insisted that most people did not mind having their picture taken while performing ceremonies… after all, the Balinese have a ceremony for everything… Including pregnancy, a child being born, the child turning three months, the child turning a year, filing teeth, buying property, death, and so on… The local even quipped, “It’s why the Balinese cannot travel – ceremonies are too expensive!” When I probed Tuco for more information about the ceremonies, and asked if the teeth-filing ceremony (where the front six teeth are filed down to one length, eliminating the ‘animalistic’ look of canines) was painful he looked at me as if I were an idiot.

Leaving the temple, our guide suddenly seemed stressed. We didn’t have proper registration papers for our motorbike, and the road to our next destination was loaded with corrupt policemen looking for any reason to pull over a tourist and demand a ‘fee’ for fast cash.

“A BIT bumpy?” I yelled, as our motorbike skid around a sinkhole big enough to swallow the nearby cow who was also trying to go around it. Bumpy is what you feel on a Los Angeles freeway… dodging chickens, logs, and large rocks was in another category. Children packed 4 to a scooter sped past us. At the top of where we needed to go, rough looking locals stood across the road and demanded money. I didn’t want to think about what they would do if we didn’t pay, so we forked over a few thousand rupiah and thumped along. Finally, we arrived at a view that overlooked Mt. Batur for a feast. I hovered over my chair, unable to sit properly anymore, and shoved fried bananas and spring rolls into my mouth. “Okay… now we take road back… I am sure there is no police.” Tuco smiled, his straight teeth stretching across his face.

Of course, five minutes on the paved goodness, we were stopped by a mean looking bunch of police. I tried to look as friendly as possible and waved – if they were going to swindle us, I at least wanted them to feel slightly guilty for it. Unfortunately, they avoided my gaze altogether. The guide slipped one especially grumpy cop some money, who came over and asked me, “Is that your friend?” He pointed to Tuco. We nodded, and he waved us through. It was sad to see that the rumors were true – many Indonesian cops are corrupt.

Needing a caffeine fix, we stopped at a coffee plantation. I bent my head over a pile of some interesting looking coffee beans to sniff them when I heard a lady say, “that’s the shit of the animal who eats the coffee beans.” My eyes focused on the clumps in front of me and I recoiled back in horror, retracting my nose that was mere millimeters away from animal scat.

Well, since I already sniffed the crap, I might as well taste it… Moritz and I ordered a cup of world-famous luwak coffee. A possum-like animal eats the coffee beans, and then expels it. Apparently, the fermenting that takes place in the animal’s stomach causes the coffee to be especially tasty. As I took a sip, the same lady told me, “it’s the most expensive coffee in the world!” So, there are people on this planet who actually pay more money for their coffee to be shat out instead of simply plucked off of the tree like the rest of us. To be honest, I didn’t notice much difference in taste and tried not to think about it too intensely.

Updated note: Apparently luwaks are not treated humanely, so I do not recommend trying luwak coffee on your trip to Bali. At the end of the day, we rewarded ourselves with a fresh coconut and 35,000 rupiah (US $3.50) 1/2 hour massages. Well deserved, in my opinion – as I’m pretty sure that the rattling of our motorbike ride gave me scoliosis.