This post is written by me, brought to you by Hotel Planner.

A few years ago, I won a reality TV show with the prize of an all-inclusive weeklong trip to Las Vegas. I’d already visited the city a few times with my friends, so I had a good idea of what’s a waste of time and what’s guaranteed to be a good time. Vegas is a place where you’ll want to spend at least two days, though you might not want to spend much longer, since the heat and the all-night festivities tend to take a toll on the body. Here are my suggestions on what you should do during a weekend in Las Vegas. 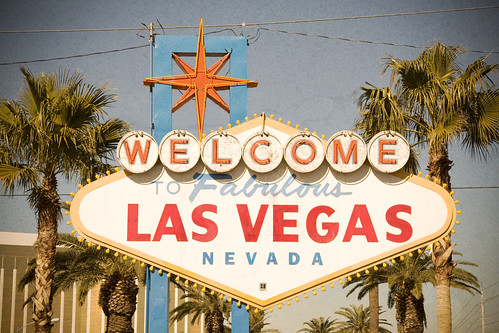 What to Do on Saturday in Las Vegas

Morning: Snap a picture in front of the iconic Las Vegas sign before heading into the heart of the city.

Afternoon: Check in to your hotel for the weekend. Though it’s tempting to stay at the big-name casino resorts like The Bellagio, Caesar’s Palace, or The Venetian, don’t pass up an opportunity to stay at less iconic hotels like Elara, the Monte Carlo, or Aria. Find a great deal on accommodations using Hotel Planner, as rates can vary greatly. Watch the Fountains of Bellagio show in front of the Bellagio hotel, where the water moves to the tune of Sinatra, Pavarotti, Broadway, and more. While you’re there, check out the Bellagio Conservatory & Botanical Gardens, which features lush displays of seasonal plants and flowers.

Evening: Dance and party the night away at one of the city’s many nightclubs. My personal favorite is Marquee, a massive dance floor with live DJs inside of The Cosmopolitan.

How to Spend Sunday in Las Vegas

Morning: Have breakfast at one of Vegas’s delicious restaurants like The Egg & I or the Rainforest Café. Then, enjoy the coolness of the morning as you walk up and down the Strip and get acquainted with your surroundings. When the midday heat cranks up, take advantage of the city’s many pools. Some personal favorites include pools at The Palms, Aria, and The Cosmopolitan, as well as the MGM Grand, which has a lazy river on one side, and pool party with plenty of debauchery on the other.

Afternoon: Las Vegas is overflowing with entertainment options, and you can catch anything from Princess of Pop performances to mind-bending shows like The Mentalist to downright enthralling performances like The Blue Man Group. If you’re pining for a cultural experience, consider gawking at the chiseled bods that star in The Thunder from Down Under.

Evening: Grab a drink and enjoy the panoramic views at the Stratosphere Tower after sunset.

In all honesty, people who arrive in Las Vegas with a detailed itinerary tend to throw it away after spending just a few hours in this overwhelming city. It’s easy to get distracted here, which is a good thing. With this as a guide, however, you’ll have an experience that you’ll remember forever but tell no one about.