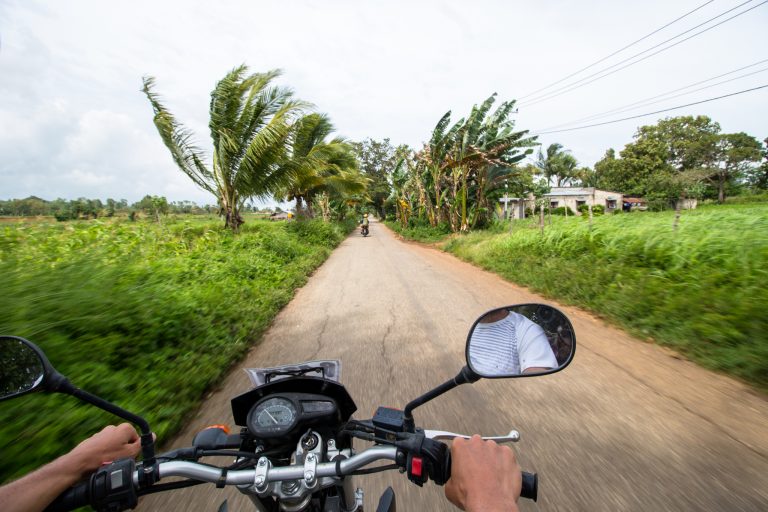 When a Trip Goes Wrong: Fear and Infection in Timor Leste

I touched my swollen ankle. The skin was hot, scaly, and red around the site of a mosquito bite. I chalked it up to a sprain and laced up my shoes. I texted a picture of my ankle to my grandma, a physician assistant and former paramedic, just in case.

The night before, the group of friends I traveled to Timor Leste with and I all fell ill with food poisoning after mistaking poisonous nuts for macadamias. Five of us crammed together in one room with no air conditioning and one toilet. A ramshackle quarantine camp. When the power went out (often), the toilet no longer flushed. We had to walk and get a bucket of water to manually expel our shame away. We only left the room to grab provisions and restock the decimated toilet paper supply.

During the height of our collective illness, we wondered if the nuts we ate were meant to be fed to animals before their slaughter. Over the next few days, we planned to drive motorcycles over the pot-holed filled roads from Dili, East Timor’s capital, to Viqueque, a small town about seven hours away.

When it came time to leave for our journey, we gathered enough strength to slump ourselves on our motorbikes and drive. Just as we’d left, a text came back from my grandma telling me to get specific antibiotics A.S.A.P. I reached down and touched my ankle. It felt hot and the swelling stretched the sides of my shoe.

Sweat matted the hair under my helmet, the dust clung to my skin, and I tried to enjoy the moments of motorbiking through East Timor despite the infection threatening my health. There’s not exactly a pharmacy on every corner in East Timor, a country that’s just come out of a devastating civil war. The East Timorese version of a pharmacy is a small stand on the side of someone’s home with yellowed boxes of medications piled inside. There’s no need for a prescription and no consultation on how to take any medication that you do find.

The rumors of many medications in East Timor being counterfeit worried me, but I didn’t have time to stress over faux antibiotics. What other choice did I have?

Once we left of Dili, the main road bordered steep cliffs. One flinch or wrong turn would send us over the edge. Locals piled onto the back of tucks and clung tightly around hairpin turns. White government SUVs drove like madmen, overtaking our vulnerable motorcycles with no consideration that with one wrong move from them, we’d be roadkill.

One white SUV nearly clipped our back tire.

A few minutes later, we saw the same SUV rolled over in a ditch.

When our motorcycles sped through towns, children and adults stood on the sidelines and screamed, “Malae! Malae!”

We passed incredible white-sand beaches that looked like ideal snorkeling spots – until we caught sight of the “Risk! Crocodile” signs posted at their entrances. Crocodiles are revered in Timor Leste and treated with respect by the locals. Tales of feeding the crocodiles one week and then ending up as croc chum teeter on the brink of tall tales and being, apparently, common.

Despite having a fun time seeing the scenery of Timor Leste – motorcycles often give you the feeling of being in the world, rather than simply looking at it through a glass window – I couldn’t stop worrying about my infection. When we stopped at a roadside stand for food, I teared up in fear, pain, and frustration. I’d sent a picture of my swollen ankle to five medical people back home. Each person wrote back with a clear message, basically saying, “Get to a hospital, now!” Out of the three pharmacies we stopped at, none had what I needed.

I sensed that my infection frustrated a few people in the group. Though probably trying to be helpful, they minimized the seriousness of my infection by suggesting that I increase the dosage of my anti-malarial antibiotics or to take medications listed on Wikipedia.

Their voices had an edge of annoyance in it.

Was I overreacting? Screw it. I didn’t want to take dodgy Wikipedia pills, so I made the severity of my situation clear. Fortunately, two good friends I’d come with assured me that they’d help me get treatment and even offered to drive me back to the main hospital in Dili if needed.

If there’s one recurring lesson in travel, it’s that you need to be a strong advocate for yourself.

We found a public hospital in Bacau, Timor Leste’s second largest city – though city is a generous description of the place. We walked into the maternity ward at first, and after pantomiming that no, I was not pregnant, the staff directed us to the emergency room. The door of the emergency room’s squat toilet was open. The walls and floor of the bathroom were speckled with brown stains and mold.

One of the doctors spoke broken English and told me he had one of the antibiotics that I was looking for. Relief. The nurse sat me on an uncovered hospital bed tainted with blood stains. The nurse jabbed my dirt-covered ankle with tweezers. I cried, and my ankle bled onto the bed — adding to the DNA collection. Locals crowded the doorway and I heard them whisper, “malae…. malae…” A woman and her son with injury on his head walked closer to get a better look.

The doctor handed the nurse a scalpel.

“We need to get pus,” the doctor said.

I retracted my ankle.

They didn’t try clean the dirt-caked wound site before attempting to cut through.

A crowd of locals gathered at the doorway and whispered among one another whenever I yelped or spoke.

I stood up and asked for my antibiotics. The nurse put the scalpel down and the doctor obliged. I’d soon learn that I had cellulitis — an infection that never needed to be cleaned out with a scalpel.

I grabbed the medication and treasured it like gold. We hopped back onto the motorcycles and sped through the towns on our way to Viqueque. The race to Viqueque (and against sepsis) was on – we wanted to get there before dark. Feeling like I had my antidote, the ride was equal parts terrifying and exciting. We snaked around pot holes, animals, and children playing in the streets. One child in a group of seven-year-olds looked at us and muttered “malae” as he exhaled the smoke from his cigarette. When we passed a crowded football field, nearly every person turned their head at the sight of six tourists speeding by on motorcycles. Their faces bore skeptical expressions.

If only my ankle would get better.

Night came and we still hadn’t reached our destination. Without the sunlight, it was harder to brace for the bumps and my backside was in dire need of a break. We kept taking wrong turns, and stopping to ask for directions.

We pulled up to what was most likely the place we’d be staying, though the staff there didn’t seem to expect us. Regardless, they fixed us dinner and we spent the rest of the evening dodging ginormous beetles and the even bigger toads that found the beetles delicious. Thank god for mosquito nets. In the morning, we set off to Dili, where the only obstacle in between me and my appointment at a Singaporean-run medical clinic, Stamford Medical Center, was a flat tire, more motorcycle issues, a police-stop, an empty gas tank, dust clouds, and seven hours of barely-paved road. My insurance told me to fly to Darwin if no progress was made within a few hours. Oh, and another person in the group – the one driving my motorcycle – had an infected wound and felt feverish. At 9 p.m., we finally made it back to Dili. The next morning, I went to the medical clinic (with luxurious blood-free hospital beds!) and the doctor was happy with the progress shown from just one night of the right antibiotics.

To date, this is one of the most hectic adventures I’ve ever been on. I left the trip feeling a mix of alarm and relief about all that went down. The doctor in Dili confirmed that I was at risk for getting sepsis, and I learned later that I’d worried my grandpa so much, he was about to take a plane to Timor Leste. My mom, a nurse, sent messages every few hours that ranged from concern to pure command that my leg get better. Making my family worry from the other side of the globe? That’s an experience I never want to repeat again.

With a few days left in Dili, we planned for another motorcycle adventure – this time with my antibiotics firmly in hand. I mulled over whether it’d be a good decision to leave Dili, the only place in Timor Leste with quality healthcare, and decided to take the risk.

Next up? The last ride to Maubisse.