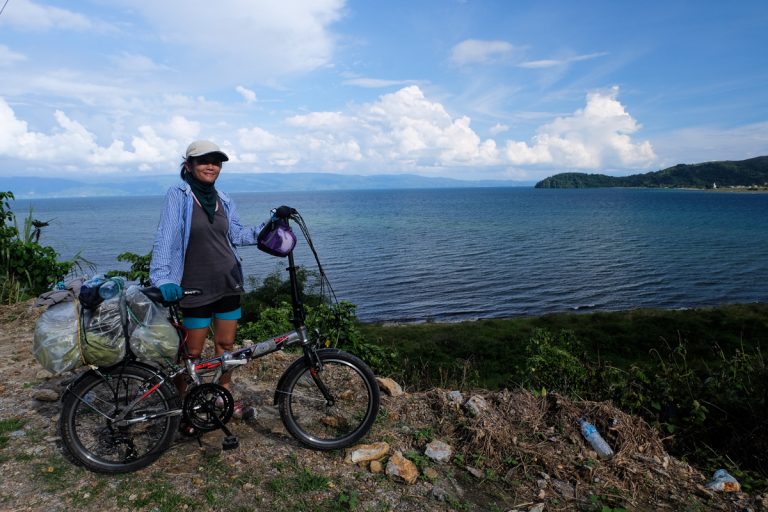 Touring Around Lake Poso, Indonesia on a Bike

This story was written by guest blogger, Marco Ferrarese.

“This is also pig,” the man said. He was grinning, his face twitching at the seams, a bit like a party balloon about to explode under his hat. Of course, even if he found it so amusing, he could have never fooled me around, for a quick glance at the table behind us revealed that my suspicions were true: a group of young men were working, chopping and spilling blood all around. And I’m sorry, but a pig’s leg doesn’t look like a paw.

Abhorrence to westerners, it’s considered a delicacy among the Dero people who welcomed me and my wife in their village of Bancea, a beauty of grids and small terraced houses on a sandy bank of Poso Lake, Indonesia’s third biggest, and one of Sulawesi’s most forgotten places. We had arrived only about two weeks after Christmas, rolling slowly down a mountain that took a tremendous amount of strength to climb. The area is very welcoming also because it has never brimmed with tourists anyhow: a long and sad Christian-Muslim inter-religious conflict scarred the area until about 2011, somehow outcasting Central Sulawesi to a class of its own… a paradise for the adventure seeker — that is, me and Kit Yeng.

But what made our arrival in Bancea even more amazing and welcoming, earning us a free room in the village’s headsman home, was the fact we arrived on folding bicycles, loaded with bags, no panniers, just jump chords… and no experience in cycle touring whatsoever.

Are we mad? Maybe, but cycling around Poso Lake worked wonders for chasing a good adventure.

Yes, we have done some pretty wacky things in our lives, such as hitchhiking in Iran or taking a boat from Sulawesi to West Papua. But among all of them, deciding to start cycling on some of Indonesia (and Asia’s) most mountainous terrain was one of the most brutal resolutions.

In the span of 5 days, we covered a mere 200km from Ampana to Pendolo, a series of mountains that alternate one after the other like the teeth of a saw. Up and down, up again, down and up… did I say UP again? Jeez, I’m sweating just thinking of it. The Exitway 20” wheel folding bikes we used were sturdy enough to get by, but loaded with about 10kg of bags each, that contributed to making going up the switchbacks real soft torture for calves. 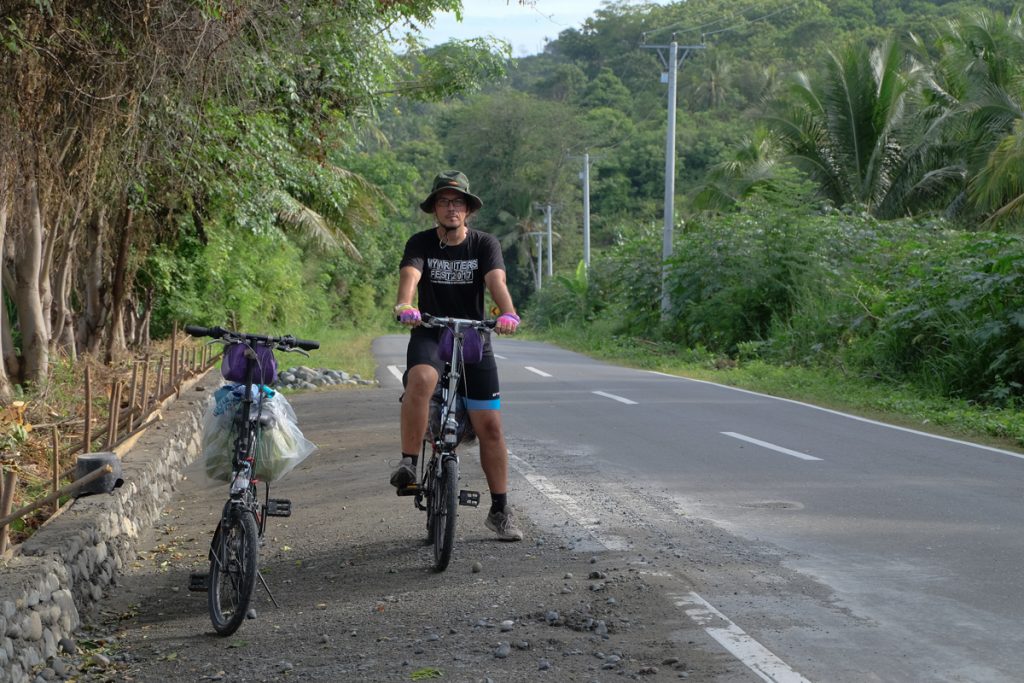 So why you did it, you may rightly ask. Well, I’m kind of an Asia Old Hand, and a jaded traveler… and after a lot of adventure jumping into other people’s vehicles, we wanted to try cycling as a mean to change the way we approached travel. We wanted to go slower, embracing chances to have deeper connections with the locals. In Sulawesi, we were very right about this last part. 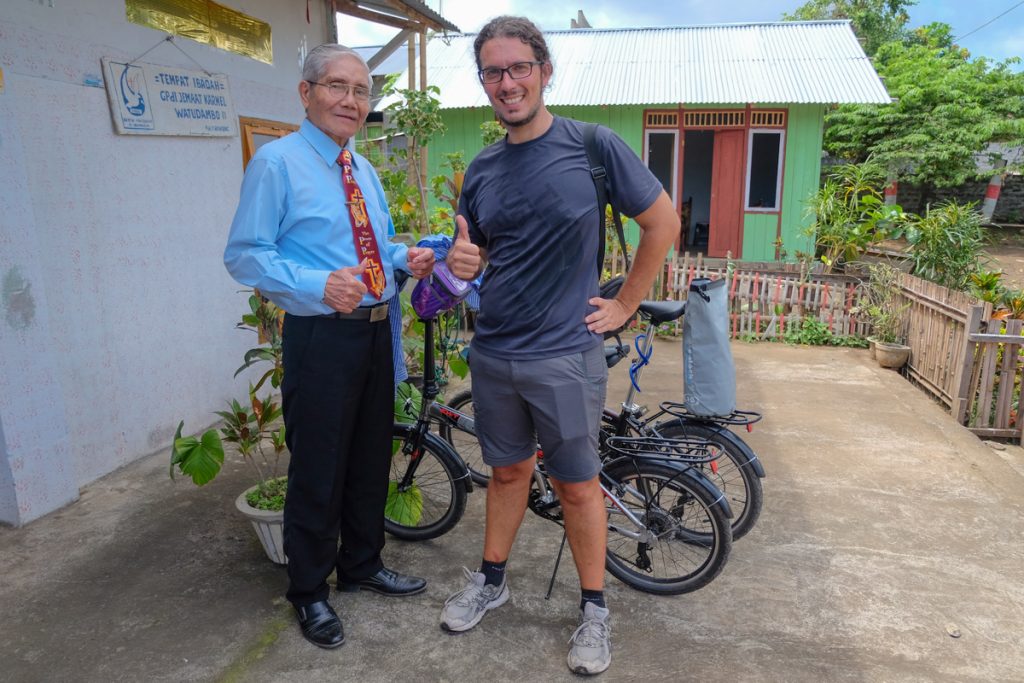 Can you imagine pulling into a small village after sweating for 20km, and see every single person stop whatever they were doing to look at you? Intimidating? Well, that was what happened to us every single day, multiple times per day. 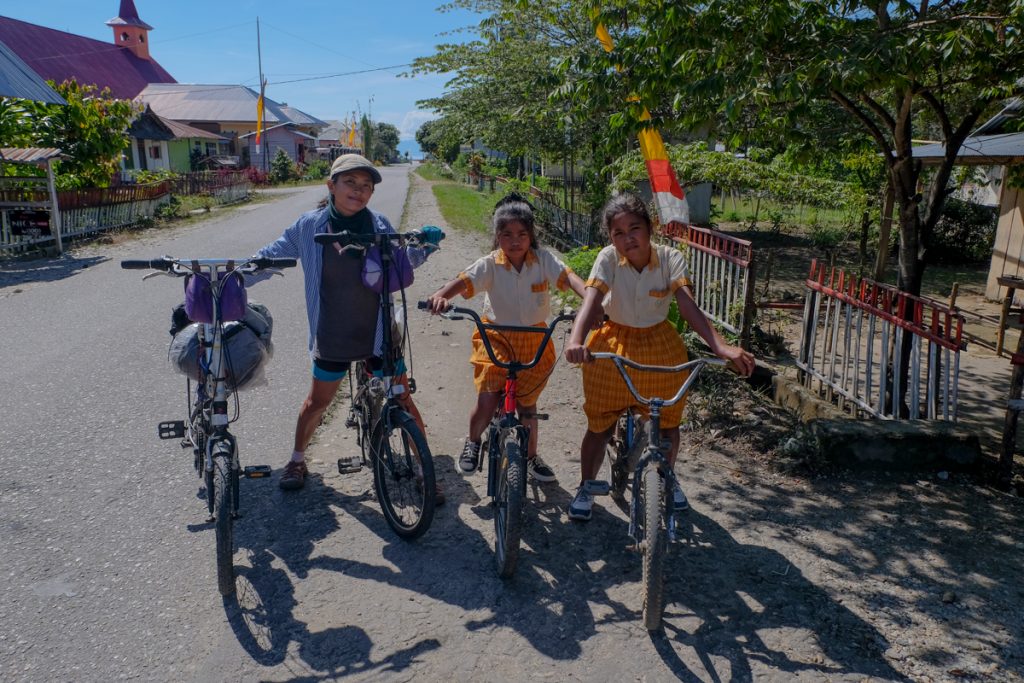 It wasn’t intimidating at all — it was actually great: children on their own flimsy bikes were following us until their villages’ outer limits. Families invited us for lunch or dinner. Some even helped us by offering a room to stay the night. All because of the power of going slow, and using a bike to move around very uncharted territory. 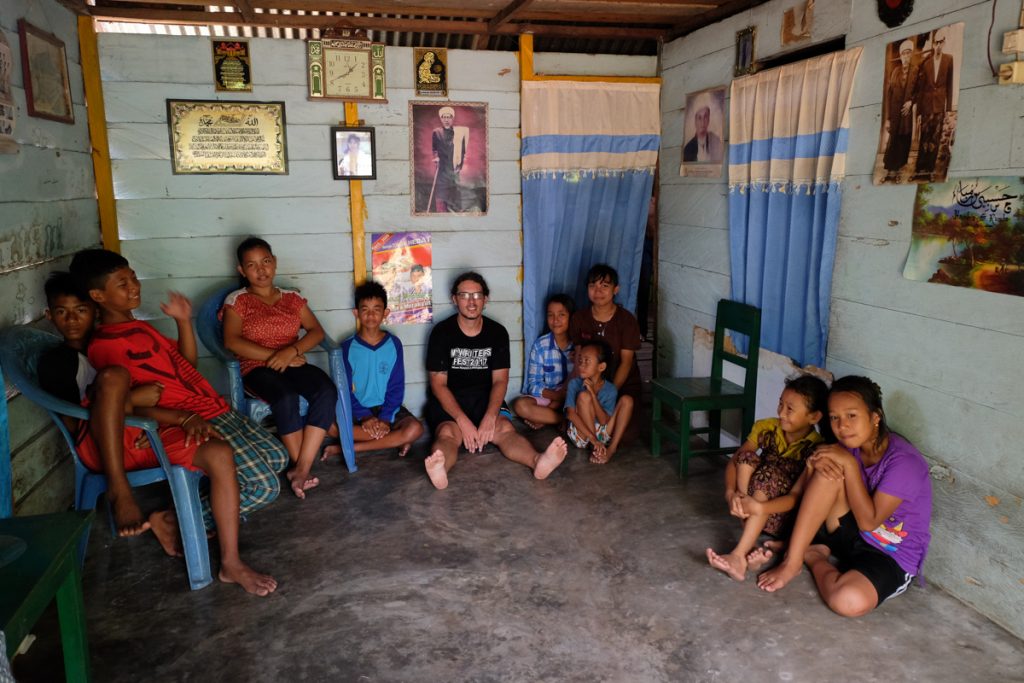 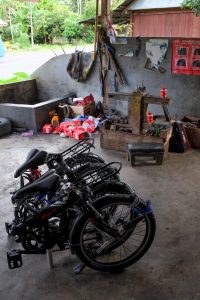 Touring on a folding bike: what to expect

On the contrary of what most cyclists may tell you, touring on a folding bike is totally possible because most modern foldies are built to last. I personally never felt the bike was shaking or unsuitable to roll downhill. In the few cases I felt the handle wobbly, I just had to tighten one single screw — most times just using my fingernails, for I had my tools confiscated at Kuala Lumpur’s airport, as I was smart enough to forgot and pack them in the carry-on pack.

And speaking of luggage and airplane restrictions, yes: the folding bike, placed in its own carry bag, could be checked in as a regular piece. No extra fees paid, no hassle at the airport.

The flexibility of using the folding bikes was just what we needed: compact enough to fit on a ferry’s deck, they were easy enough to fold (in less than 15 seconds) and stash into buses’ luggage compartments or car trunks. We never set out with the idea of cycling every mile of the journey, so the folding bikes ended up being quite handy and adaptable to any situation, be it cycling, or just traveling by other means.

A Route Around Lake Poso

Me and my wife Kit Yeng were very surprised to see that such a beautiful lake, and the villages around it, saw no tourists at all. From the shore, Poso stretches as big as a sea, and even if we are used to water bodies since we live in tropical Penang, Malaysia, it was still quite stunning.

We started in Ampana, which is the landing point for travelers to the Togian Islands, a popular diving destination. Following the Jalan Trans Sulawesi all the way, the next major stop is Tentena, a very nice lake town and possibly the one on this route that’s more equipped for tourism. It took us roughly two days to get there. Along the way, we intended to camp, but we just resorted to asking people in the villages where we could set up a tent, and were instead invited to stay in their homes. Speaking Indonesian — OK, we are fluent, but try to make an effort to learn some basics when traveling to this region — obviously helps opening even more doors because finding English speakers around Lake Poso is not rare, it’s frigging impossible. 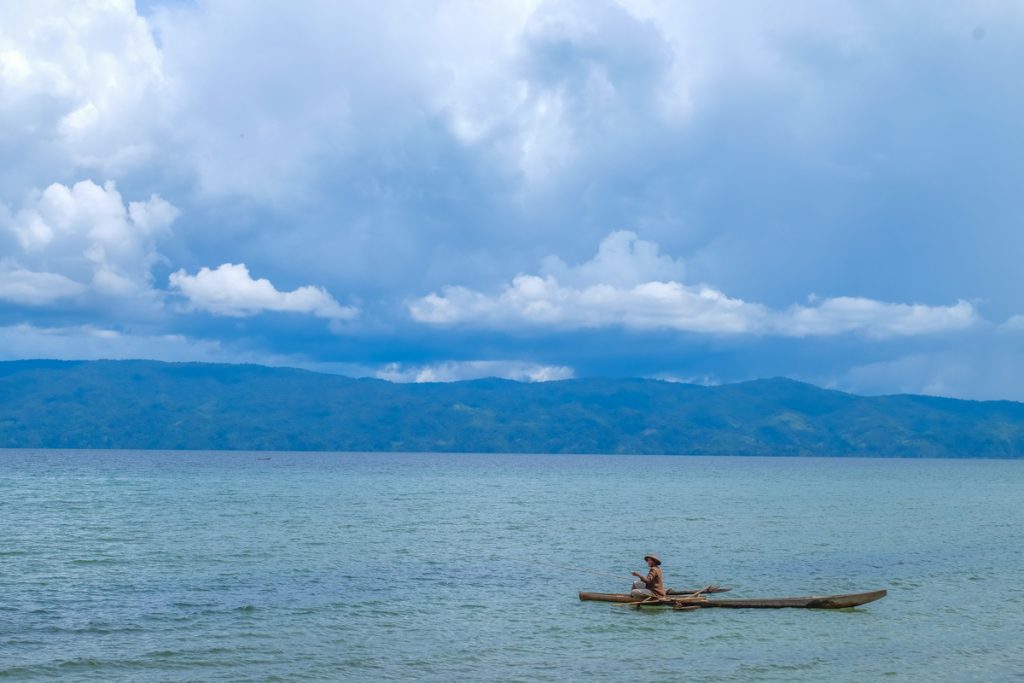 From Tentena, we continued on a new road on the western side of Poso, touching at lovely Bancea, where we spent two nights, practically forced here by the villagers, who wanted us to participate in their final Christmas celebrations. The Dero people have a very special way of bonding through dancing: over a base of dangdut music, people hold their hands creating a circle, and shake their fists up and down in a sort of wacky line-dance with some easy steps I could never muster. Kit eventually did 🙂

From here, there are only 20km to Pendolo, where you can take a shared car into South Sulawesi, and from there proceed by changing to a bus to Rantepao in the popular Torajan Highlands. We did not want to venture up here by bike because the mountains are just too steep to enjoy. 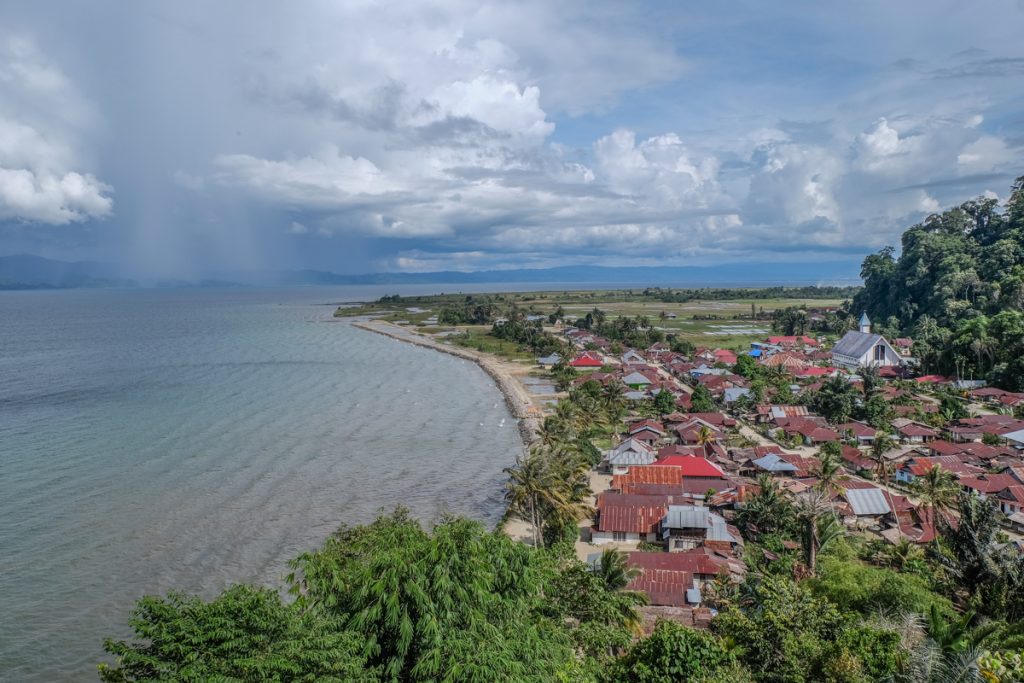 Why should I go to Lake Poso?

Well, if you are reading this blog, it means that you are seeking some adventure. And by far, this part of Sulawesi really did it for us. It had friendly and hospitable people, good food, a stunning scenery that switches from many kilometers of coastal highway to grassy and challenging peaks, endemic wildlife (macaca nigra, the culpables of the world famous monkey selfie) and no white people for miles and miles. That’s what, more than anything else in this world, makes our hearts beat faster: very off the beaten track places where you can really have a nice adventure. 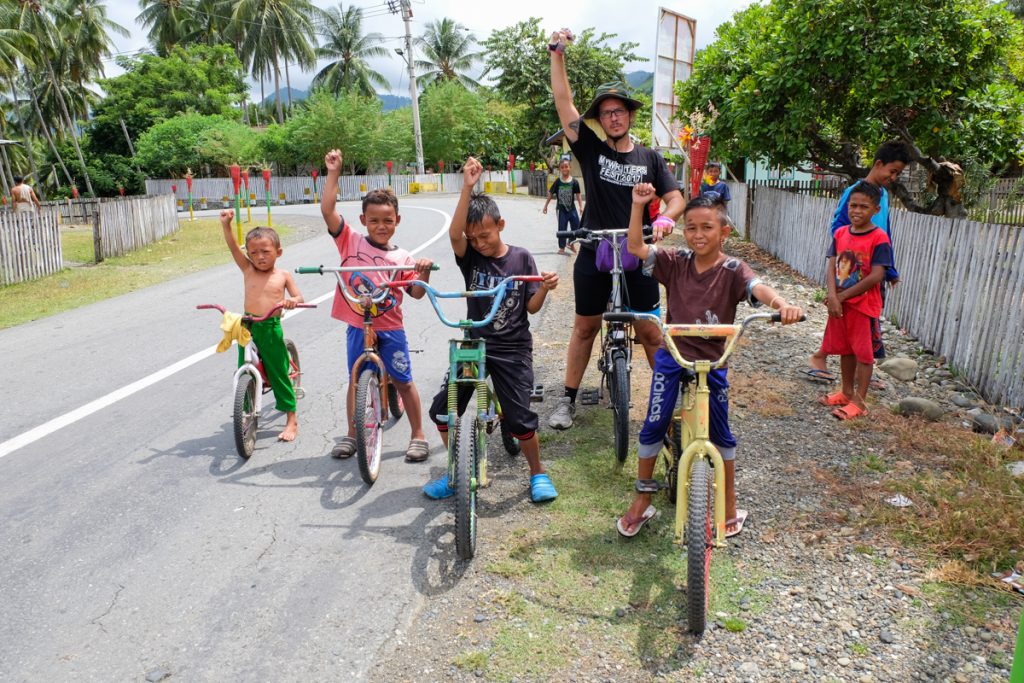 In a nutshell, if you consider Bali heaven, Lake Poso will be hell and you should never want to come this side of Indonesia. 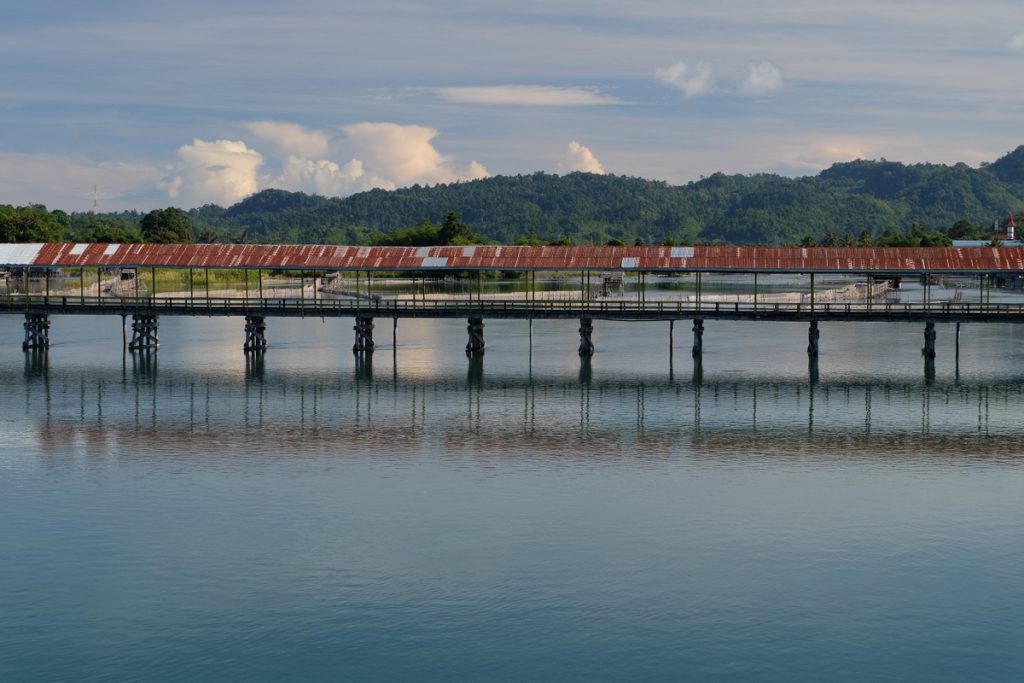 But if, on the other hand, what you are looking for is a bit more meaningful than a suntan and hordes of beer-guzzling Australians, a tour of Lake Poso (by your own wheels, as public transport tends to bypass the region way too quickly on the way to Toraja) can be your antidote to backpacking depression. 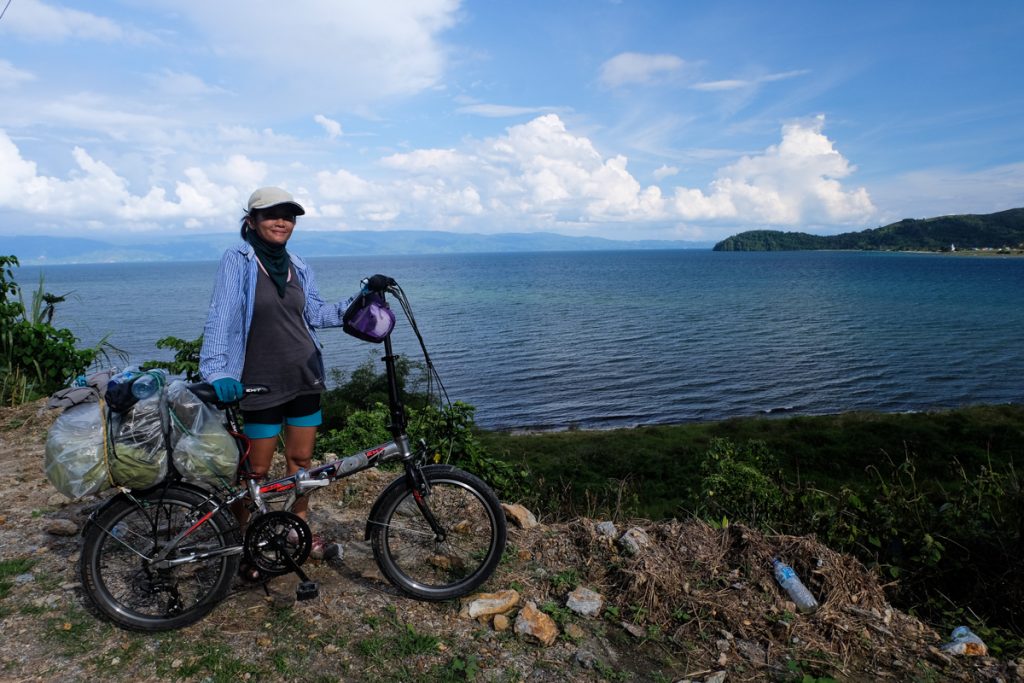 Follow more of Marco and Kit’s adventures on their blog, Monkey Rock World.