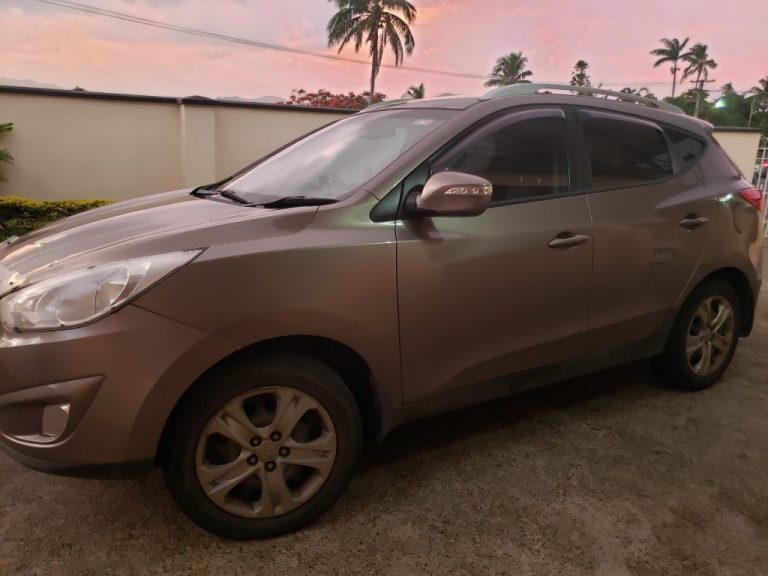 Life in Fiji: Buying a Car

Buying a car anywhere in the world is rarely an exciting process–especially when you budget guides you to one that’s secondhand. When I lived in Australia, I drove a Hyundai hatchback, a scooter, and a Toyota Hiace campervan named Snowball.

For nearly two years, I’ve gotten around Fiji by taxi, hitchhiking, bus, and catching rides with friends. In the early mornings before a surf, Mo and I would stand on the side of the road until a taxi large enough to carry our surfboards would pass by. For any trip longer than 30 minutes away, we’d call our taxi driver-turned-friend, Sunil, to take us. He’s the only driver who seems to know where the brake pedal is–and therefore, the only one I don’t have to fake getting carsick with.

And while I think taxi drivers in Suva (Nadi is another story) are trustworthy, the constant barrage of personal questions that taxi drivers often asked combined with crazy driving at times began to take its toll. Plus, there’s the fact that schlepping sporting equipment around the island is a bit inconvenient if you don’t have a vehicle to chuck it into.

So, the hunt for the perfect car began.

Finding a reliable secondhand vehicle in Fiji can be a bit of a mission. Potholes, a lack of parts, constant rain, and lax maintenance routines can turn even the most robust cars into rust buckets. There are a plethora of Facebook groups selling cars–typically some variation of the Toyota Prius. Aside from these groups, there are a few used car lots and dealerships throughout the city.

We took a few weeks to comb through various ads and visited just about every dealership in town.

We stopped at one of the most popular dealerships in town and took a stroll through the lot. The used car salesman pulled us aside and tucked his chin into his chest before drawling out a slow whisper.

“You don’t want any of these,” he said. He flung his hands towards the cars as if shooing them away. Then he told us, “I know a guy who’s selling exactly what you’re looking for. Give him a call.”

For a minute, I wondered whether we were in the market for a car or illicit substances.

We took one stroll around the lot to save face before wandering back into the office, where we got the phone number of a man wanting to sell a car within our price range. We sent the guy a message.

Our used car dealer was spot on–the mysterious text message guy had exactly what we were looking for. During a test drive, the car drove great.

Negotiating the price was another story. The owner set his price a bit higher than what we were willing to go. We replied with a price that was a bit lower, but still fair.

“Sorry, it’s too high for us. Let us know if you are willing to drop the price.”

A few minutes later, he responded.

This is how we ended up with a Hyundai Tuscon as our adventure vehicle for Fiji!

Tips for buying a secondhand car in Fiji

Ask around. Your friends and colleagues may know of someone selling a reputable car. While many expats assume that purchasing another vehicle from an expat is the best way to go, consider that it might have been owned by many people before you and that many expats don’t put care into their cars because they only plan on owning it for a year or two. It isn’t always a solid deal.

Classifieds are typically found in the Sunday newspaper or on Bulacars.com.

If you’re renting a car, we’ve had positive experiences with Central Car Rental in Suva.

Negotiating the price is expected, and should be done in good faith from both ends. Once a car is purchased, both the owner and the new buyer have to go to the LTA together to sign over paperwork.

Thinking of moving to Fiji? Click the link to read all of my latest advice.