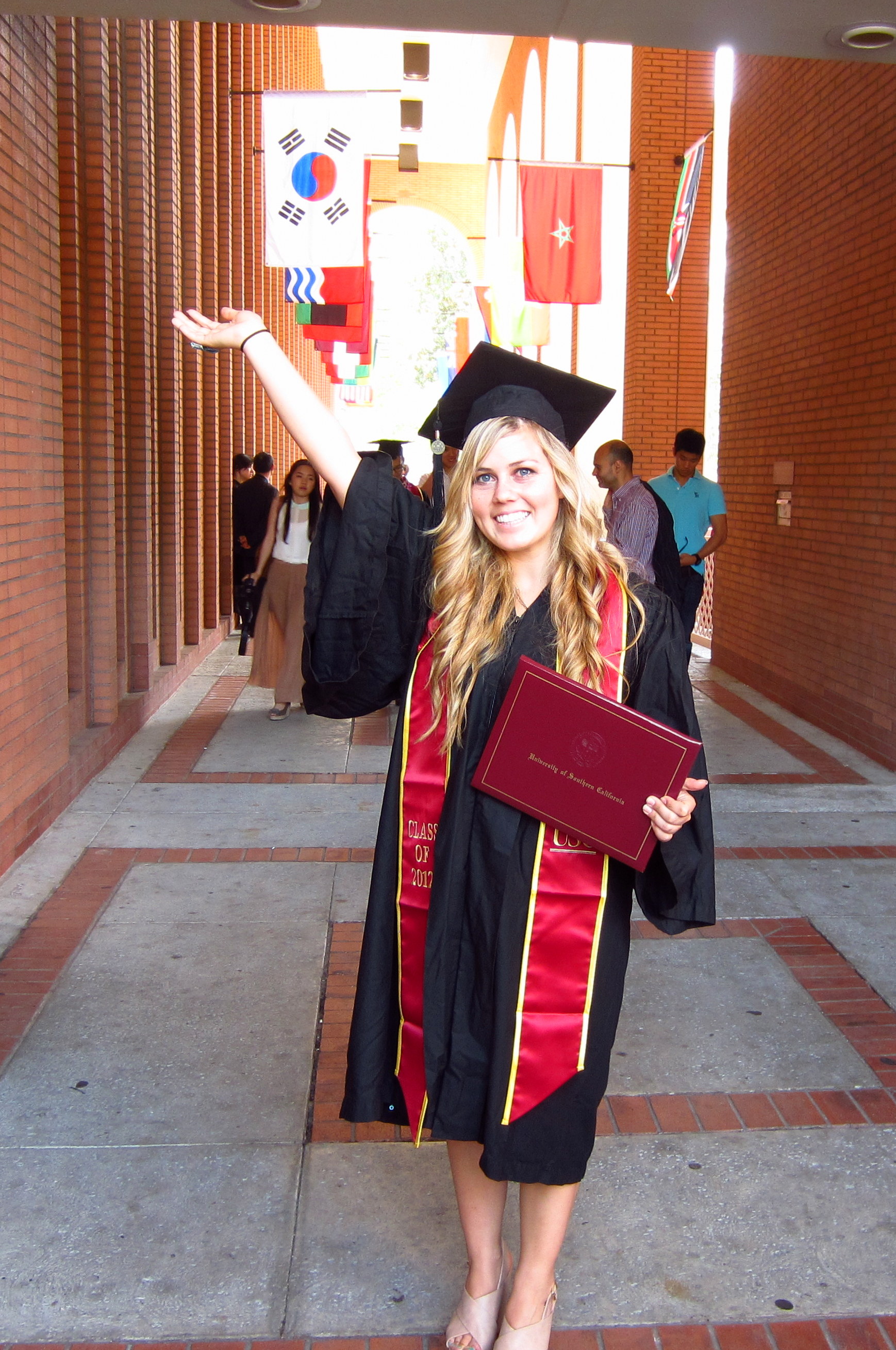 My Last Semester at USC

Sadly, it is my last semester at USC because I’m graduating one semester early. I awkwardly have already walked because they don’t offer a December ceremony and I plan on being lost and stumbling around in a foreign country come summer 2013.

It’s kinda scary though — USC will let anyone walk as long as you have a gown.  They don’t even check to make sure you’re a student. After learning this fact, I was suspicious of about 10% of the people who walked across the stage for the class of 2012. Especially the bearded man who forgot to wear pants under his gown.

It’s not a complete fluke though because technically I’ve already completed my political science degree.

Before: An untamed freshman.

After: A “polished almost-graduate” whose brain cells have been parasitically killed off by the classrooms in the building behind me.

In many ways it feels like I’ve come a long way since my freshman self — except for the fact that I still have no idea how to cook. I’ve been eating the same five items of food for the past two years.

My freshman year I had a meal plan and feel nauseous looking back at the amount of cereal/homemade “salad chili” I used to shove in my face, and vaguely remember using just my bare hands once to do so. I took refried beans from the Mexican section of the cafeteria, and put random vegetables in it from the salad bar. I think beets were involved at some point. The leftovers were given to the cafeteria feral cat, who you can find on facebook here. EVKitty protected my meal from the pigeons, who would often encroach on my feasting territory while fighting each other over the occasional left behind chicken nugget (cannibals!).

Give me the beans and nobody gets clawed.

This was legitimately in the school paper. The cannibal pigeons were pleased.

I’m taking … 18 units semester despite needing only four to graduate! Is this how a hoarder feels? “I only need one toilet paper package but instead I have 1,231,983! Just enough to fit behind my wall of ketchup packets!”

Advanced legal writing II. I’ve already taken the first one and masochistically applied for the second. Thankfully, I was accepted. There was probably a glitch in the system, or perhaps my professor is just as equally masochistic for accepting me back into his presence. Apparently we get to go to San Francisco to see the CA Supreme Court in action — I’m beyond excited for this.

Email sent by my professor two days before class started… Only a little reading to do.

Improvisational comedy. A class that will turn my life into less of a chaotic tragedy.

Public speaking. According to RateMyProfessors, (Embarrassingly, I was actually on an advertisement for the reality show I took place in for a little while) the professor means serious business and it’s pretty hard to get a decent grade. Apparently, you learn a lot in this course despite this! I have a tendency to go on tangents so perhaps my rogue thoughts will be tamed into coherent sentences by the end of the semester but I’m not getting my hopes up — you know what they say about old dogs and tricks. I’m just crossing my fingers that people don’t verbally point out how red I am at the end of my speeches — YES, I’m aware that I look like John Candy after he’s run a marathon. Leave me alone!

Friends are always disappointed when they realize the reality show is basically just a fitness video AKA not interesting. The editor cut out all of my best lines because I “didn’t take it seriously”

Psychology of marriage and the family. Divorce is sort of trendy in my family — or as my high school ex-boyfriend’s mother used to say, I “come from a broken home.” But hey, what’s a little fun without the dysfunction? Call me a rebel but I want to only get married once in my lifetime. I enrolled in this course because what better way to learn about successful relationships than in a classroom setting filled with college kids?! Downside: I don’t see this as a course where smart, funny, and attractive male students (potential suitors) will be. Please let me be wrong!

I need all the help I can get for our marriage to succeed. Mr. & Mrs. Grylls.

Criminal behavior. I’d tell you why I’m taking this course but then I’d have to kill you.

Will my courses be everything I dreamed of and more?! Will I get lost as a senior going to class? Will a freshman on Trojan meal plan offer me some dining dollars for a coffee?  The adventures continue!