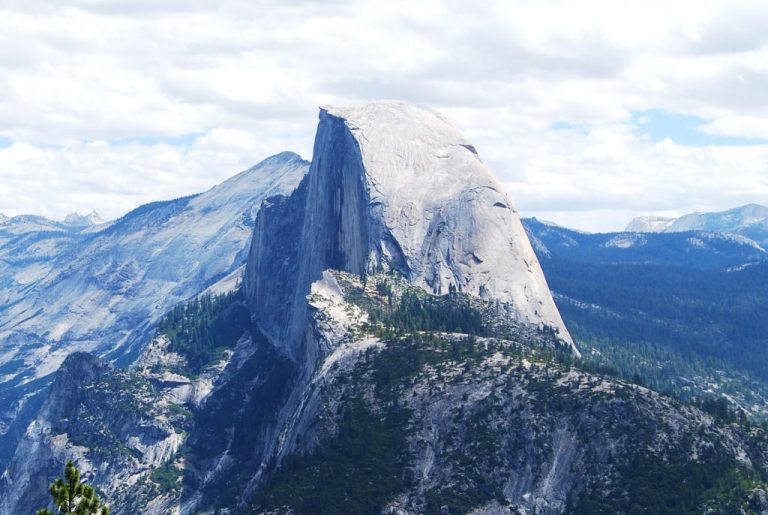 8 Amazing Things to do in Yosemite National Park, California

Yosemite National Park spans through the Sierra Nevada mountain range, and spans across great distances that range from dense forest to sparse vegetation. There are tens of campsites, lodges on the park’s perimeters, and it is a park that’s accessible to just about anyone who wants to visit. I grew up spending summers at Bass Lake, an alpine lake just a few miles from the park’s gates.

Map of things to do in Yosemite

The most amazing things to do in Yosemite National Park

Hike to the top of Half Dome

Half Dome is the aptly name of the giant granite boulder that has become the de facto icon of Yosemite National Park. Hiking to the top of Half Dome is no small feat, but the views from the top are well worth the climb.

If you are a hiker and plan to just one thing in Yosemite National Park, consider it hiking to the top of Half Dome. This 17-mile (27-kilometer) trail passes Vernal and Nevada Falls before reaching the base of Half Dome. From here, hikers use the aid of planks and cables to scale the back side of the rock.

Half Dome is only open to hikers between June and August. Permits are required to hike Half Dome, and it’s not recommended for unskilled hikers. 300 permits are issued per day and must be secured in advance on the National Park Service website.

Admire the views from Glacier Point

One of the most scenic spots in Yosemite National Park is the view from Glacier Point. From here, you can peer into Yosemite Valley and capture the profile view of Half Dome and witness the beauty of Yosemite, Nevada, and Vernal Falls from a distance.

Note that this is also one of the most popular spots in the park, as it’s easily accessed by car. The walk from the parking lot to Glacier Point is just under a mile long.

Raft along the Merced River

Grab a raft and laze the day away along the Merced River. This three-mile journey is quite relaxing, and visitors are welcome to bring their own raft or rent one from the park directly. Kayaks are also permitted, if you prefer to see the park from a craft that’s a bit more svelte.

El Capitan has been one of the most high profile climbing sites among rock climbers for decades, but rose to international fame recently after Alex Honnold climbed to the top without the aid of ropes in 2017.

Go to El Capitan to see the climbing scene in person, or try your hand at one of the routes along the face yourself. The lighting of El Capitan changes throughout the day, with shadows dancing across its face as the sun rises and falls across the largest granite rock on earth.

One of the most peaceful parts of the park, Tuolumne Meadows is where you’re likely to spot deer frolicking among the grass. From this region, you can embark on tens of different day hikes and explore the sub-alpine meadows on foot. Expect serenity and solitude in Tuolumne Meadows.

Peer up at the sky through a telescope

Without the influx of any light pollution, Yosemite National Park is a stargazing safe-haven. During the summer months, park rangers host astronomy walks in Yosemite Valley, Tuolumne Meadows, and Wawona. Some stargazers set up telescopes at Glacier Point.

But the best way to enjoy the stars above Yosemite National Park is to crawl out of your tent in the middle of the night and wish on the shooting stars above.

Wander to the waterfalls

Come springtime, a cloud of mist seems to linger in the air at Yosemite National Park. As the snow melts, rivers and gorges overflow and cascade over the many peaks of Yosemite. If you’ve come for waterfalls, visit around May to see each waterfall at its best.

The most accessible waterfall is Yosemite Falls, a three-tiered waterfall that is one of the tallest in the world. Because of its size, it’s easy to spot Yosemite Falls from multiple vantage points around the park. A one-mile loop takes you to the base of the falls and the path is wheelchair accessible.

There are tens of other waterfalls throughout the park, each with their unique appeal. Some falls, like Chilnualna Falls or Wapama Falls in Hetch Hetchy Valley impress with their size, while others like Vernal and Nevada Fall prove that you don’t have to be big to be beautiful.

Be amazed by the Fire Fall (Horsetail Fall) at sunset

The Fire Fall in Yosemite deserves a point of its own as one of the most mesmerizing things to do in Yosemite. Horsetail Fall, a 1,000-foot waterfall that flows off of the east side of El Capitan from January to April got its nickname as the Fire Fall because of its majestic appearance.

At sunset, the orange hue that illuminates the water falling off of the face of the cliff makes Horsetail Fall look as though it is made of embers. It’s possible to witness this natural phenomenon from the El Capitan picnic area, or from the road nearby.

What would you want to do in Yosemite National Park?