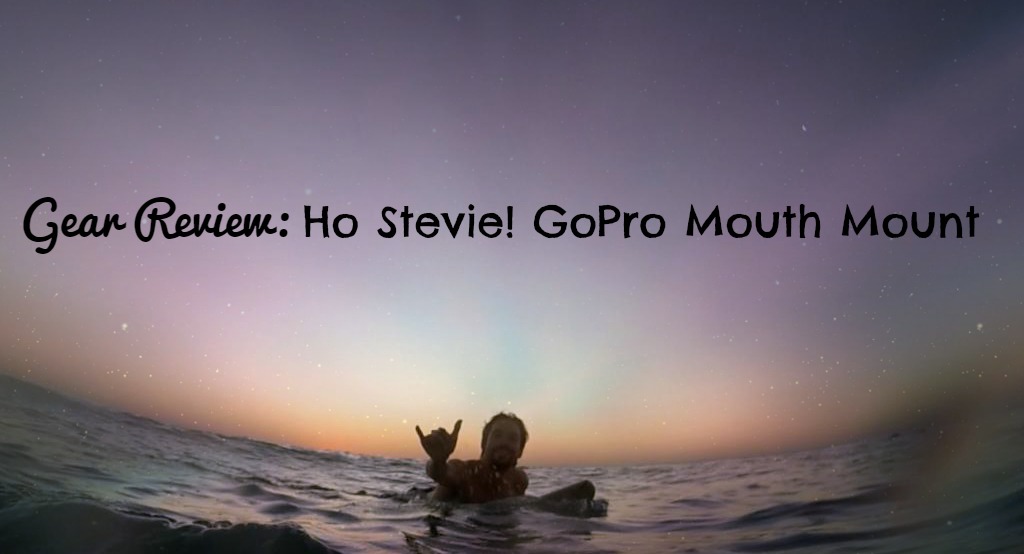 I’m going to put it out there and humble-brag that I’m a GoPro hipster. I used the first model of the camera back in 2010, when people would stop me on the street and ask me what it was. GoPros used to be attached to you via a wrist strap and were a pain to paddle in the water with. Today, I have a variety of different mounts but will give you a complete GoPro mouth mount review.

Since my ancient one, I’ve owned the Hero 1 and recently purchased the Hero 3+ silver edition.

I’ve seen GoPro mouth mounts pop up in the surf scene recently and always wondered if they’d be annoying to surf with. Don’t they get in the way? Aren’t they uncomfortable? They look so weird! So when Steve, the bubblegum pink haired owner of Ho Stevie! contacted me and asked me if I wanted a GoPro mouth mount to customize and review, I had to take him up on it.

Check out the video below of Mo and I goofing around with the GoPro mouth mount.

I picked the colors of the mouth mount to match my beloved wetsuit and made the main color hot pink to deter Moritz from stealing it (not that this worked, though!).  The materials are overall sturdy and I like that the mouth piece is from soft rubber similar to scuba diving regulators.

I wanted to take it on small waves as a test run, because I remember how annoying the wrist strap was back in the days for paddling. The mount is perfectly fine when you keep it in your mouth, but the stares from nearby surfers do take a few sessions to get used to. Mouth mounts are becoming more common, so I think the stares will fade away in the near future.

Over the course of a few surf sessions, I’ve developed a system.

I attach the leash it comes with to the zipper of my wetsuit and let the camera dangle behind me until I want to use it. If you surf with solely a rashguard or a bikini it might be distracting to hang onto. The only thing you have to be conscious of is not letting the GoPro bang into the surfboard while it’s dangling, so that it doesn’t ding the board or scratch the case. Aside from a little surf wax in the cracks of my case, my stuff is as good as new!

At first, I was hesitant to take it to breaks that required a long paddle out. Now that I’m used to the mount, this isn’t as much of a problem. I’d suggest playing with it on a beach break to begin with where you can drop it back to shore easily if needed. The mouth mount offers an infinitely better view than the board mount. I’ve used the board mount a few times but have never been happy with the pictures — usually my head is chopped off and it’s not an exciting angle after you’ve seen surf videos from the selfie perspective a few times.

Breathing through your mouth is possible but gives the video a Darth-Vaderesque sound. If you edit music into your surf videos this wouldn’t be an issue, but it is something to think about if you like to leave your video audio unedited. Mouth breathing is a hard habit to break if you’re used to breathing out of a snorkel or scuba regulator.

I’m not comfortable with kitesurfing yet to take it out myself yet… I can barely focus on all of my equipment enough as it is! However, I convinced Moritz to take it out and come back with a review. He expected to bring it back to shore after a few minutes but ended up keeping it with him the entire session. We’d been attaching the GoPro to the kite lines in the past and had a great time mixing up the angles between the mouth mount and line mount.

The mouth mount can be used for the same things you’d adhere a helmet mount to without having to actually place a mount on it. So, while it’s marketed it as a surf mount, it can be used for pretty much anything. The Ho Stevie! GoPro mouth mount is a toy suited for people who are very comfortable in the water and can handle having something else to think about. It does take a few attempts to get used to it, but once you’ve passed that threshold it’s fun to play with and convenient to carry around.

The Ho Stevie! mouth mount specifically is customizable and priced similarly to the other’s I’ve seen on the market (that aren’t customizable). It’s not as hands free as other mounts, but lets you be more creative with your footage. I’m excited to piece together a video that is more exciting than nonstop selfies! Well, I’ve had the Ho Stevie mouth mount for over six months now and have to admit that it is GoPro mount that I reach for the most out of all of the mounts I own. It’s easy to throw in my bag and take along with me for just about every activity. The quality has held up, and I’ve had no issues so far.

What do you think? Are they still too weird? Would you use one? Many thanks to Ho Stevie! for the mouth mount! As always, all opinions are my own.