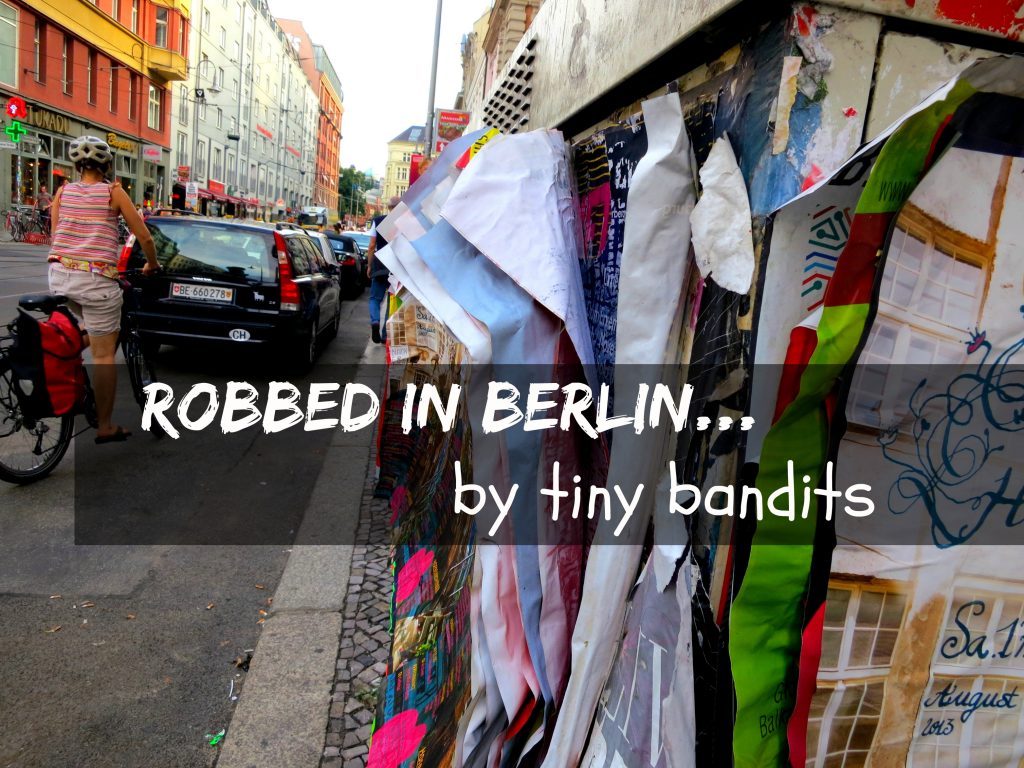 The Untold Story of Berlin: I was Robbed by Tiny Bandits

A few school children put their half eaten kebabs on the train tracks and waited for a train to come.

I admired the ringleader of the group, who’d convinced the others that forfeiting their after school snack was sure to pay off in a tzatziki explosion.

With just a short amount of time to spend in the Berlin, Moritz and I immediately got to hopping on trains and weaving between the Berliners and fellow travelers. While the sun was out, street performers put on political performances (only slightly offensive to astute Americans) and souvenir stands overcharged tourists for pieces of painted concrete insisting that it was genuine bits of the Berlin Wall. Posters clung to every pole, forming thick stacks of technicolor messages. Any idea in a recently stapled poster was sure to be covered within a matter of minutes like an ancient form of Twitter. When Moritz spoke to other Germans, he’d snicker the minute the Berliners turned their backs, exclaiming, “they have such funny accents!” Not realizing that the others probably thought the same about his. I recently realized that all of these memories of colorful Berlin have been buried in my journal for the past two years. So now, I’m ripping off a stack of virtual posters to reveal the story about how I was robbed by tiny bandits. Berlin is anything but bashful. The people drive how they want, dress how they want, talk how they want, and will even sunbathe naked in the public garden if they want. When the Berlin Wall came tumbling down in 1989, people from both sides climbed on top of it and started dancing and they haven’t stopped dancing since. There’s no time to be lethargic, because from the second your feet hit the ground it’s go-go-go. Moritz and I sipped Berliner Kindl on the river bank and marveled at how industrial yet personable the entire city felt. We walked past abandoned buildings, peered inside the cracked concrete and saw piles of half-finished paintings inside. Although the canvases themselves were tossed aside haphazardly, each brush stroke on them had clear intention. Once the sun went down, women in tall heels roamed the sidewalks and officers took to guarding the synagogues. Mischief lingered around each corner as lights turned on and off around us.

We met up with an old friend from USC who led us to an abandoned apartment factory. We climbed up what felt like a never-ending staircase with bits of broken glass clustered in each corner. Some people sat in the darkness of empty rooms, minding their own business while others gathered around a small light and did who-knows-what. We made it to the roof and saw a massive sprawl of city lights before us. It felt fresh to be outside, having escaped the stench of stale air and urine. We climbed to the edge of the platform and heard all about my friend’s life in Berlin – he’s a creative type with a big personality, so of course he fits right in. He told us about how one night, he fell asleep on the metro and went around and around the city for a few hours. When he woke up, he went to check the time but his phone was gone. It’d been relinquished to Berlin.

A few Dutch strangers made their way up the stairs and joined us, tossing their empty beer cans off of the roof into the night.

On our way down the stairs, the entire mood of the complex changed. People spoke in hushed whispers, retreating deeper into the shadows.

A bright light hit our faces. Three police officers blinded us while asking, “Do any of you speak German?”

The officers were dressed from head to toe in SWAT gear. A bulletproof vest, a helmet, and a tool-belt filled with enough guns and tasers to take down the entire Mexican drug cartel with a few bullets leftover to damage a small country.

“Hello? Do any of you speak German?”

My friend pointed to Moritz, “he does!”

Not usually one to cause the type of trouble that gets noticed by police, adrenaline started coursing through me.

The policemen and Moritz engaged in a rushed conversation. Were they saying we’d be fined? Cuffed? Thrown in the slammer?!

“They said ‘please don’t do that anymore.’ They were really nice.”

It wasn’t exactly the COPSesque scene I pictured of myself locked inside of a Berlin prison. It was a bit of a let down, as I’m sure that the street art and music scene is pumping in there. It could have been my one shot at feeling like an insider in a city that is so flawlessly cool. Then again, I’m sure that Berlin prisoners can probably smell fear and would’ve made me put on a drindl and say the word Brötchen a thousand times over while they sloshed their pint glasses filled together, laughing at me like I was a dancing monkey.

Knowing all of the trendiest spots, my friend led us to one of the city’s hottest food stands, that of course used to be a public bathroom. Across it stood a bar configured out of a former shipping container. So many buildings once had former lives, like graffiti covered hermit crab shells being swapped around from person to person looking to reform them.

We went our separate ways – my friend to his apartment and Moritz and I to the train station. On the way, we saw a young, pretty girl squatting under a street light. When we made eye contact with her, she turned around and mooned us. The next day was filled with another hectic day of train hopping, walking around the city, and posing with bubblegum pink life sized Barbie houses. While waiting for one of the metros, I rested my head against Moritz’s shoulder as he glanced over a map. A loud bang went off. A lady pushing a shopping cart filled with clothes held up a popped chips bag and laughed, proud that she’d scared just about everyone in the station including us. We sat down for a romantic meal in one of Berlin’s notorious neighborhoods, immune to any feelings of worry. Halfway through our dinner, two small girls aged around five and seven came over and waved papers under our noses.

Immediately, the girls made eye contact with one another, communicating a telepathic confirmation and sprinted off.

Moritz and I checked our things, agreeing that we still had everything. Feeling as though we’d escaped something sinister, we finished the rest of our meal without any more thought to the little girls who’d come and blitzed us with a flurry papers.

In an instant, my phone vanished into the hands of tiny fingers.

“Let me guess. Two little girls came and took your phone.” The police officer held his hands out, approximating the girl’s height. “Congratulations. You’re the 10th person to come in and tell us this tonight!”

Moritz acting once again as the middleman between myself and the police translated my misfortune.

The police brushed us off in a we have better things to worry about type of way and told us to come back tomorrow. Moritz and I were able to turn on “find my iPhone” and located the two girls, their leaders, and any seedy acquaintances hung around them. We contemplated confronting the robbers ourselves since the police didn’t see the precise location of my phone (and likely ten others) as enough evidence to go in and do something about it. We opted against it – anyone who has the audacity to put children in danger by having them do the dirty work is not a person I wanted to end up in a scuffle with.

Ah, Berlin. Easily the most intriguing city I’ve ever been to that comes at a steep price of robbing phones off of the people who love it. What Did I Learn From This?

I should’ve learned these lessons in Barcelona – where my camera was stolen – but unfortunately I’m too dense (or unlucky?) for that.

Don’t have anything in plain sight, even when you think you’re not a target.

Don’t be a sitting duck and have your things where others can see them. Carry a bag with a zip closure and keep your things inside of it whenever you’re not using them. I will never travel or have a non-zip purse ever again. My phone was stolen because it could be seen – meanwhile my camera and wallet were safe because they were out of sight. In Barcelona, I was off guard because I thought I was alone in a park. In Berlin, I thought we were safe in a restaurant. Not so! It’s a preventative measure that’s easy to carry through as long as you don’t become lackadaisical about it.

Buying things secondhand is not only environmentally savvy, it’s great for traveling too. When you travel your things are automatically at risk for getting lost or stolen.

Reporting it usually doesn’t take too long and you might be the lucky one to have your item come back to you. I cross my fingers for the day my stolen things return to their loving home (camera, phone, wallet, and phone #2, do you hear me!?).

Don’t let it ruin your trip

Could I have rounded up a gang of people to confront my robbers with me? Maybe. Would it have been worth my limited time exploring? Probably not. I’ll admit that I did get really upset when my camera was stolen in Barcelona, along with all of the pictures inside of it. Ultimately the memories you make while out adventuring are worth more than anything you’re carrying with you. These things happen. It stinks. Try not to let it ruin all of the positive things that are inevitably going on as well.