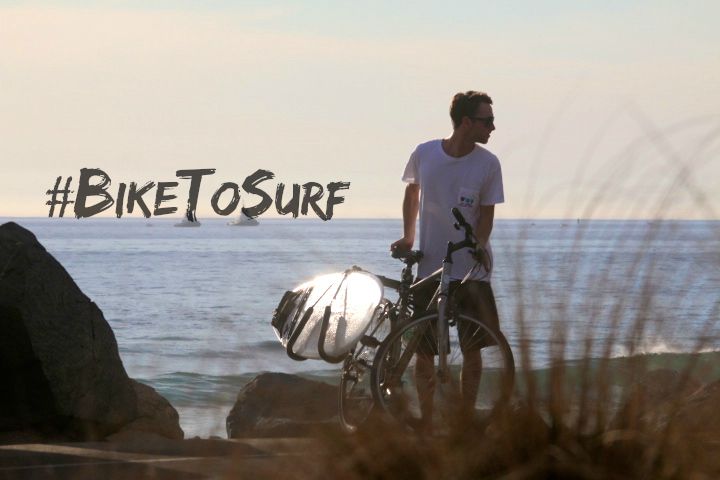 The Bike to Surf Movement with Cameron from My Wave Addiction

A few weeks ago, I stumbled upon surf writer Cameron Brown and his blog, My Wave Addiction. I found myself nodding along to so many of his posts that revolve around sustainability, surfing, and the human obsession with living a convenient lifestyle. Lucky for us, he’s agreed to participate in an interview about a movement, Bike to Surf, where he’s lowering his CO2 emissions by bicycling to surf spots for an entire year. First of all, do you mind telling us who you are and a little bit about My Wave Addiction?

I grew up in the South Bay of LA. Started surfing at 12 and at the time I was riding my bike to surf with my friends before class in middle school. We’d get up super early in the dark and go down there to get like 45 minutes in the water, even though we started school before 8 AM. I grew obsessed with the sport as many people do. During high school I stopped playing team sports because I found myself at soccer and hockey practice, just wanting to be at the beach. I was over having coaches telling me to run and skate laps, I was over the politics of team sports and I just decided to focus on surfing. I went and did NSSA contests every weekend, and rarely did well but I had fun doing it. Eventually, I ended up at SDSU, and I spent 5 years down there, 3 of which I was on their Surf Team. We won a national championship during my last year there. It was a blast.

After college I was dying to go to Indonesia, and My Wave Addiction started as a place for me to share stories about my travels with my friends and family. As I wrote more, people in my life seemed to like it and wanted to read more. And now it’s a year later and MWA has sort of morphed into what it is today: A place for curious surfers whose interests span beyond the happenings of the ocean. It’s funny because there is not a lot of surf-specific content on my site. I end up posting about all sorts of random topics that interest me, so while surfing is a constant underlying theme because it’s ingrained in my life, and a huge part of who I am as a person, it’s definitely not just a place for surfers. My love for surfing and the ocean often ends up being the motivation behind topics that I like to write about, including but not limited to: travel, the environment, and life in general. Obviously surfing is a huge part of your life, hence the blog and aspirations as a surf journalist. What is it about surfing that makes you so passionate about the sport?

Hard to answer this one in an original way. The name of my site kind of says it all. I think most surfers, probably including you, understand how it can become a bit like an addiction, and how you can actually crave it. There are many parallels that can be drawn between surfers and surfing, and anyone who is really passionate about their biggest hobby, whether it’s a sport, a creative activity, or even their life’s work. What makes surfing unique to me (again, this has been said time and time again), is that we can never ride the same wave twice, which keeps things interesting. And I guess once you get barreled as well, like really, truly barreled, that kind of changes the game. That’s my ultimate craving.

Can you tell us about your new campaign, #BikeToSurf? Where did it come from and how has it been working so far?

Bike to Surf began by me deciding that I would only go surfing by way of my bike for one year, to offset all of the emissions I spent while traveling over the previous two years. About a month after I made that decision, I wanted to think of a fun way to get other surfers involved, if only for a short period of time, as a way to create awareness about our ability as individual surfers to lower our emissions. So I decided to create a Bike to Surf week from September 12 – 19th in which surfers around the world could participate. You can read more about that here, and you can find the campaign page itself here. What are some of the rewards and challenges you’ve found about biking to surf?

I’ve talked about the rewards of Bike to Surf, which include saving money, exercising outside, and more human encounters.
An excerpt from the post, “I ride along the bike path in zones where there are no parking lots, and I have the freedom to spend as much time as I’d like sizing up any individual section of my local beach break. This is something I rarely did when I was driving to surf.” In terms of challenges, it really isn’t all that difficult for me, but I live relatively close to the beach. The main challenge comes down once again to convenience, which I’ve also written about and I think is the article in which you and I were connected on.

What do you suggest for people who can’t bike to surf, but still want to counteract the negative environmental impacts of surfing?

Great question. I think that carpooling with friends is a great way to reduce your emissions and still drive to the beach. Also, we tend to like to check ten different spots before we surf to find the best waves, but how often do we end up back at the first place we checked? I guess the best thing you can do is just stay local and enjoy what’s right in front of you. If you can learn to really enjoy surfing average waves, I think that’s a great start in not always needing to continue driving (and emitting) to find the best surf.

Another thing I’ve brought up is that people don’t need me to learn how to lower their emissions. This information is out there and easily accessible, at the tip of our finger tips online all the time. My main goal is to get people to care more. Because if surfers care more, they can easily figure this stuff out for themselves. What I’ve learned throughout my transition to living a more sustainable lifestyle on a personal level is that it’s not that easy, and it takes time, but you just have to dive in and choose one thing to commit to. And once you get that thing down, implement something else, and so on and so forth. One step at a time and all of the sudden a year later you’ve really cleaned up your act.
Surfers are connected in a unique way to their environment, and we should be leading the charge on this sort of stuff, not waiting for others to lead and then following along. Sometimes I find living a sustainable lifestyle to be overwhelming. What are some things you do to keep yourself motivated when it seems like everyone else doesn’t care?

Another great question. My answer unfortunately doesn’t have a ton of practical value here for readers. It’s just something inside me that I can’t help but care. It’s just a naturally occurring bug inside me that feels guilty if I’m not doing my part. I didn’t always have this, it’s pretty new in my life, but it’s real and it’s powerful and there’s no reversing it now that it’s happened. Surfing and the ocean are a motivating force behind it, but I honestly feel like this would have happened to me either way, with or without surfing.

Where’s your favorite wave in the world?

What wave are you riding most often?

Thank you, Cameron, for giving us some great ideas and inspiration.  I’m off to go pump my bike tires…

You can follow Cameron and his blog, My Wave Addiction, on Facebook, Instagram, and Twitter.
Type to search or hit ESC to close
See all results
We use cookies to ensure that we give you the best experience on our website. If you continue to use this site we will assume that you are happy with it.Ok