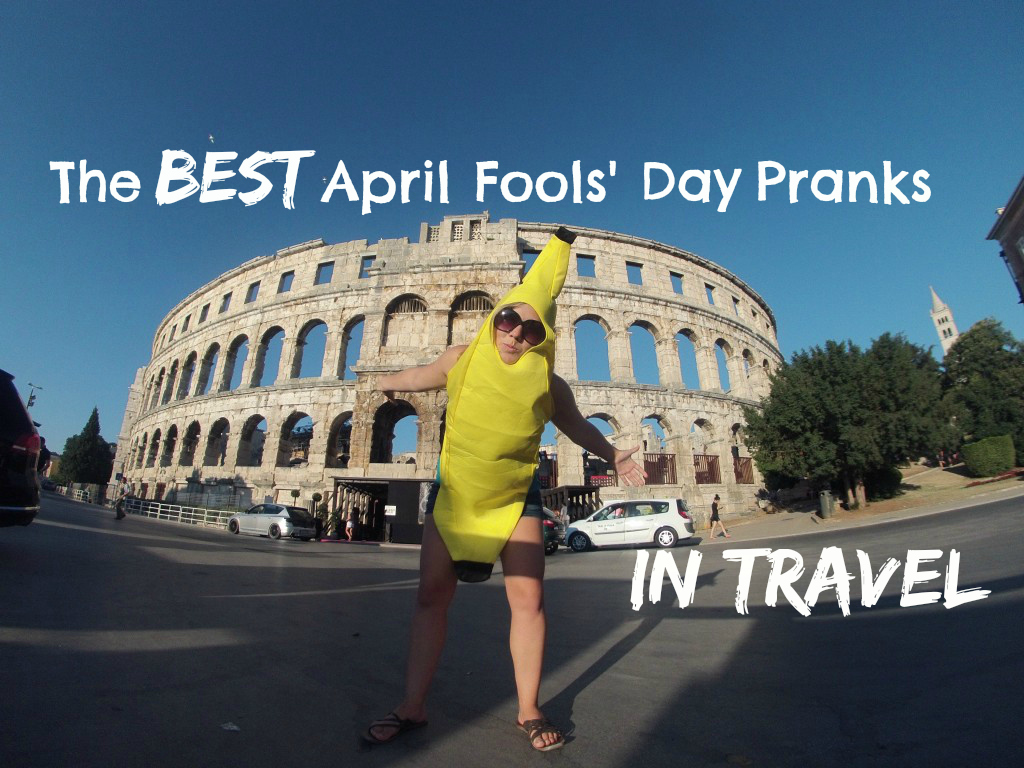 April Fools’ Day has always held a soft spot in my heart. Not knowing how to read a calendar, my little sister and I would wreck havoc year-round on any unsuspecting victim’s — usually my dad. We’d paint his toenails red and put paint chips in his mouth while he slept peacefully oblivious. Some classics were placing baby oil on the toilet seats, silly puddy on the shower head, hiding rotten eggs… but enough of my memory lane. This year I’ve cooked up the best April Fools’ Day pranks for travelers.

Replace a fellow travelers passport with one of those children’s ones you get in a happy meal. Hide their real passport somewhere incognito in their carry-on luggage such as between the pages of a book and watch them squirm as they try to explain their way out the situation.

Show up to the airport dressed like the Hamburglar. When checking in, make subtle references to being on FBI’s most wanted list. Twitch and wipe your brow when the check-in attendant scans your ID, and then fist pump when it goes smoothly. Ask if they know of any air marshals flying today “just out of curiosity.” Comment that it seems that the attendant hasn’t been keeping up with the news (or McDonald’s commercials) much.

Put a baggie of flour in someone’s bag just before boarding on a flight to Indonesia. (Actually you probably shouldn’t try this one either.) Hang a clothesline up across your aisle. Then place a pair of wet socks onto them and asks if anyone has a spare pair of compression socks because yours have gotten “just a bit pungent.” Bonus if you can put them near the air conditioning vent.

Start talking to the person sitting next to you about your entire life story, beginning with how your grandparents met and a detailed history of your ancestors. Say things like, “fast forward to when…” and “long story short” and skip back to the time Jesus was born (and how he influenced your ancestors migration). Include many “side notes” and “let me explain” statements. Lean forward so that they are forced to hold eye contact with you for the entire duration of the interesting story about how old Uncle Bill, well, his name was William but we call him Bill. Strange really? To call someone William, “Bill?” You would think he’d be Will or even Liam but Bill? Anyways, old Uncle Bill is gluten free. He can’t eat rice or porridge… or was it grains he can no longer have? Shame really, to give up donuts. He always thought it was IBS – you know what that is, don’t you? I have IBS, by the way, so excuse me if I have to get up often to use the little girl’s room. I can’t help it. I inherited IBS from my Aunt Mae, short for Mable. People assume it’s short for Maybelline. Have you ever heard of Maybelline? Maybe she’s born with it, maybe it’s Maybelline? Get it? Maybe and Maybelline? Clever, hey?  (If they get up to go to the bathroom, get up and stand in line with them to keep the riveting conversation going. Reference as many catchy jingles and abstract people as possible.)

When most of the passengers start sleeping, stand up, yodel, and beat your fists to your chest. Explain that you’re just keeping the circulation in your body moving to avoid deep vein thrombosis. “Just yellin’ to avoid the thrombo!”

Oldie but goodie: touch the head of every person as you walk through the aisle. Occasionally, scruff the hair. If you’re feeling particularly outgoing, you can play a spontaneous game of, “Duck. Duck. Duck. GOOOOOOOOOOOOOSE!”

Spill fake vomit, blood, and other disgusting items in the bathroom and start coughing loudly. When the next passenger sees it, explain that you’ve just “picked up a little stomach bug” from your travels. Then, secure a paper mask around your mouth and nose.

Walk onto the plane and immediately ask the flight attendant for a couple of airsick bags. When she hands you one, hold up a crumpled up Sizzler’s Buffet receipt and explain that you’re “going to need a LOT more than that!” Mutter that the clam linguine was a bit tangier than usual and that you knew you should’ve taken those damn lactose pills.

In the native language, write, “These people are crazy! Do not help them!” on a piece of paper. Find a local and tell them that your kind taxi driver wrote out directions to your next destination, but you need help translating. See whether the local sides with you or the note. Or, transcribe the words, “Can you please help me find the red light district?” and see how well the local knows his way around town! Selfie stick jousting: Get a few friends together and invest in a multiple selfie sticks to walk around with in a touristy area. Whenever you see a fellow tourist with a selfie stick, instigate a sword fight or a joust. Run towards strangers with the selfie stick while yelling, “THIS IS SPARTAAA!” If the strangers run away, you can pretend not to know your friends and simulate a spontaneous duel. Props if you’re actually in Sparta.

Attempt to pay for things in baseball or tarot cards. Explain that these are really valued and work as currency in your home country.

Hold a map in front of you and follow a stranger walking around for an entire day. If they stop and stare at you, trace your fingers along the map and do not make eye contact with them. Narrate the journey with, “no… no… this can’t be right” and “hmm… I would have gone left but alright.” If they go into a building, simply choose another leader.

Place a collect call to your family members and tell them that you’ve been abducted and they need to wire you $10,000. Tell them you’ve already lost a kidney because you couldn’t remember the country code to place the call. Blow all of the money partying with rich oil sheikhs in Dubai while hashtagging #WhoNeedsKidneys #IHaveTwo #GoFundMeKidney. This may not work with frugal parents or Liam Neeson’s children.

Light sage and start smoking the entire hostel dorm room or your CouchSurfing host’s apartment. Tell others that you can sense the presence of the poltergeist and are doing your roommates a favor. At night, while others are sleeping, begin to chant and lean over your victims until they wake up.

Walk around iconic landmarks dressed like a banana. I’ve actually done this one before. What Would You Do?

There you have it. Any favorites? What one would you love to do?