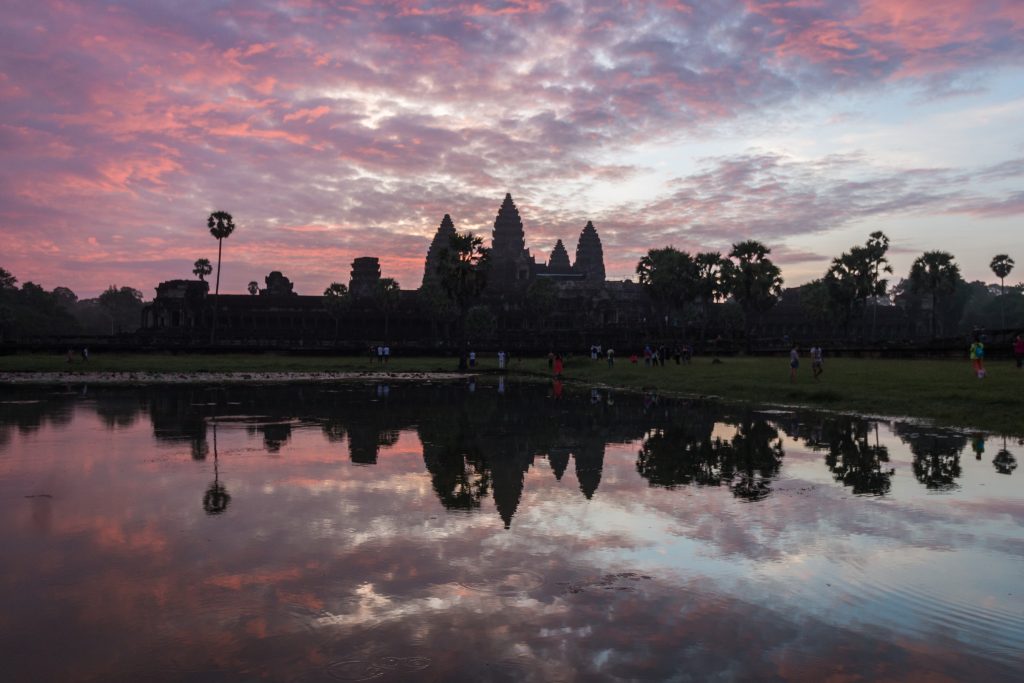 The Abandonment and Rediscovery of the Temples of Angkor

Nobody really knows why the ancient temples of Angkor were abandoned.

Was it because the area was overthrown in an invasion? It would explain why the many of the statues of Angkor had migrated to other regions.

Was it because the people stopped believing in Hinduism? A paradigm shift from Hinduism to Buddhism took place right around when the temples started to go into disrepair. Maintaining the thousands of sculptures, buildings, and carvings could only be done by an arsenal of devoted Hindus. Today, the many of the sites have been converted into Theravada Buddhist temples.

Or, was the government too overstretched and weak to make maintaining the city a priority?

Whatever the reason, Angkor’s greatness deteriorated as time went on and humans found new civilizations to build, leaving the Angkor Empire long forgotten. In the hundreds of years that followed, nature reclaimed her territory by sprouting gargantuan trees where buildings once were. Twisting, curling roots have worked their way into the crevices of temples. Green moss has wallpapered the stone and crept into the etchings of Hindu scripture. Brick by brick, the sandstone temples of Angkor are being absorbed back into the earth. The mystery. The beauty. The power.

You can imagine why visiting the temples held such an allure for me and my friend Collette — who’d flown into Cambodia for just a few days because she’s spontaneous like that. We had to see them for ourselves.

In Siem Reap, flocks of tuk tuk drivers lounge everywhere. To find the best guide for the day, Collette and I walked to a group and started chatting with them. Their heads and eyes perked up at the prospect of making a few bucks for a full day of work. We decided that the driver with the most charisma (and best English) would be our guide.

Immediately, one driver rose to the top – performing a monologue of a response to every question we asked. He spread a map across the seats of his tuk tuk and told us of all of the magical places we would go. We were hooked, and asked him to meet us at the same spot the next day. He charged $15 USD for the entire day… unless he has to wake up early. Then we have to pay him more. Sleep is time and time is money no matter what part of the world you’re living in. By the time the sun rose in the morning, the suffocating humidity already pasted my skirt to the sides of my legs. We met Ma, our tuk tuk driver, and set off to see the most in-tact and famous temples for our first day of temple touring.

Iconic and Cambodia’s national symbol, Angkor Wat is impressive. It’s the largest single religious building in the world that drives over 50% of Cambodia’s tourism. Known for its huge stone smiling faces, Bayon Temple is loved by everyone who visits. Ta Prohm is one of the most recognizable temples in Angkor because it is where Tomb Raider was filmed (cheers, Angie). Out of all the temples, Ta Prohm is the most overrun by nature. Tree roots twist and crochet through the spaces between bricks, weaving their way skyward. Ta Prohm shows that while man can produce great structures that withstand hundreds of years of abandonment, nature will still always take over. Ma wasn’t up for taking us to see the sunrise at Angkor Wat, so we had to recruit a different one. At four in the morning, it was painful to open our eyes and leave the comforts of a warm bed.

In the darkness, droves of people on the stone bridge over the moat surrounding Angkor Wat. Those that were prepared held flashlights, so Collette and I tried to huddle near them to avoid stepping on a rogue brick. Once we got inside of the gates of the temple, local entrepreneurs hollered at us.

“I’m Johnny. I’m at stall 90. After the sunrise, you come see me. I have hot coffee… pancakes… and I can even be your boyfriend.”

A pick up line that we’d groan at back in Australia was suddenly charming coming from a small man holding up a large picture of “pen-keks.”

A few other Khmer food sellers tried to woo us over with promises of scrambled eggs and noodles, but we were devoted to Johnny (likely not his real name).

The crowd huddled over the small pond in front of the temple and eagerly waited for the sun to rise. With the break of dawn came the mosquitoes, and I relished in pleasure when the girl in front of me squatted down to swat the pests away from her ankles – providing a window for me to capture the perfect view. The sky changed from dark purple to pink to shades of gold. The silhouette of the temple remained in total darkness. As the sky got brighter, the people watching got louder. The crowd gasped when the sun rose above the temple and shined at the crowd like a torch. Eventually, stomachs grumbled and even the most devoted onlookers packed up their tripods to follow the sweet scent of hot coffee and food. Sadly, Johnny was nowhere to be seen at stall 90 and we were overcharged handsomely for fluffy banana pen-keks. After breakfast, we walked towards a large horse grazing on the grass by the temple. As we got closer, a Cambodian man started sprinting towards us with his hands flailing in the air. The gesture for “get away you stupid idiot!” is universal. I loved tracing my fingers over the detailed carvings of beautiful apsaras. Faintly, you could still see the characters of Hindu scriptures etched by devoted believers hundreds of years ago.

The Gates of Angkor

Unfortunately, many of the heads of these statues have been stolen and sold. Pol Pot, in his drive to extinguish Cambodian history and culture also had many of the statues destroyed. While the giant temples were obviously impressive, it was the smaller, more neglected ruins that captured my attention. One in particular had a long wooden pathway that led over water to the temple ruin.

“The lake looks beautiful but it is sad,” our tuk tuk told us. “The water is only here because man cut down all of the trees. Now we have flooding.”

Little children took turns jumping off of the platform into the water, disturbing the water’s immaculate mirror reflection with their ripples. The temple itself wouldn’t be considered noteworthy by any standards, but the journey walking there – void of any other tourists — certainly was. After seeing more than a handful, dreaded temple-fatigue sets in. It’s hard to remember the names, and the stories, and as I flip through my pictures I honestly have a hard time telling them apart. The little moments, however, are displayed clearly in the front of my mind. I can still imagine the breeze through my hair as we drive on the tuk tuk, laugh at small jokes made by a best friend, hear the collective gasp that people let out the first instant the sun rose revealed itself over Angkor Wat, and feel the coarse texture of sandstone underneath my fingertips. I remember my legs burning as we walked up stairs, the smiling faces of statues, and panoramic views of the jungle. While I did get tired of seeing temple after temple in sweltering heat, I’ll never get tired of reliving the small moments that made up those long days. The temples of Angkor are currently in a state of disrepair. There is currently a massive strain on Angkor caused by the tourism industry. The temples sit on a water table, which is currently being drained to serve visitors. It doesn’t help that the high tourist season corresponds to Cambodia’s dry season. Only ~28% of the admission fee goes back into restoring the temples because the temples are no longer managed by the government. Like everything in Cambodia, the situation is complex and has undertones of corruption. Obey all rules and stick to the paths when visiting the temples – constant climbing has worn down the carvings.Admission cost: One day pass $20USD/Three day pass $40/Seven day pass $60. You do not have to use your pass in consecutive days. It’s good to take a day off in between if you have the time.
Tuk tuk for the day: $10-15 to see the temples during normal hours. $15-20 for a sunrise tour. Many tuk tuk drivers will give you a discount if you book them for multiple days in a row.
I highly recommend Lomrond – extremely trustworthy, fair, and friendly. His phone number: 0889192806
I also highly recommend Ma  – great conversationalist, fun, fair, and friendly. His phone number: 017976437
Keep in mind that I had many drivers on this trip and I recommend those two highly. While I have the numbers of other drivers, those two stood out above the rest.
Other essentials: Make sure to wear good shoes and cover your knees and shoulders. Bring snacks and water. October is a great month to visit because there aren’t as many visitors as in the high season.