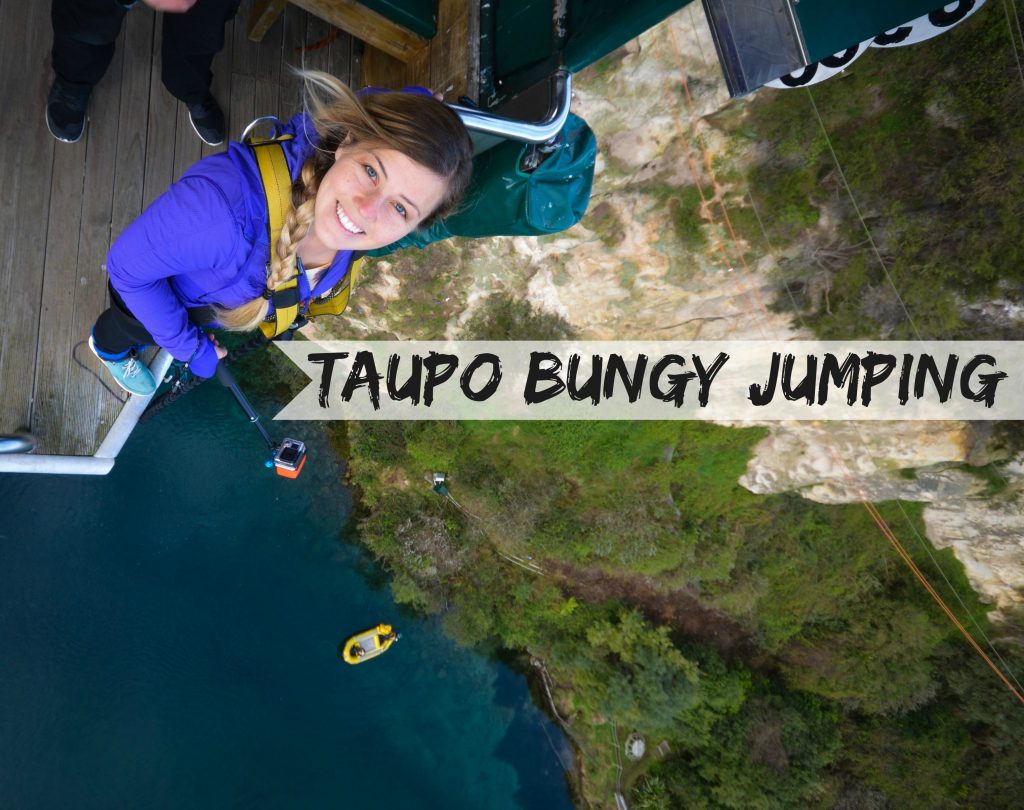 The longer you dwell on what you’re afraid of, the more fearful you’ll become.

This is a pretty well documented psychological phenomena, and one I try to keep in mind whenever I’m doing something adrenaline inducing. I don’t wait until after the count of three, because after that? That’s when anxiety starts to build.

So, unlike my newly made friend — tall British dude — I bungy jumped on the count of two instead of three. 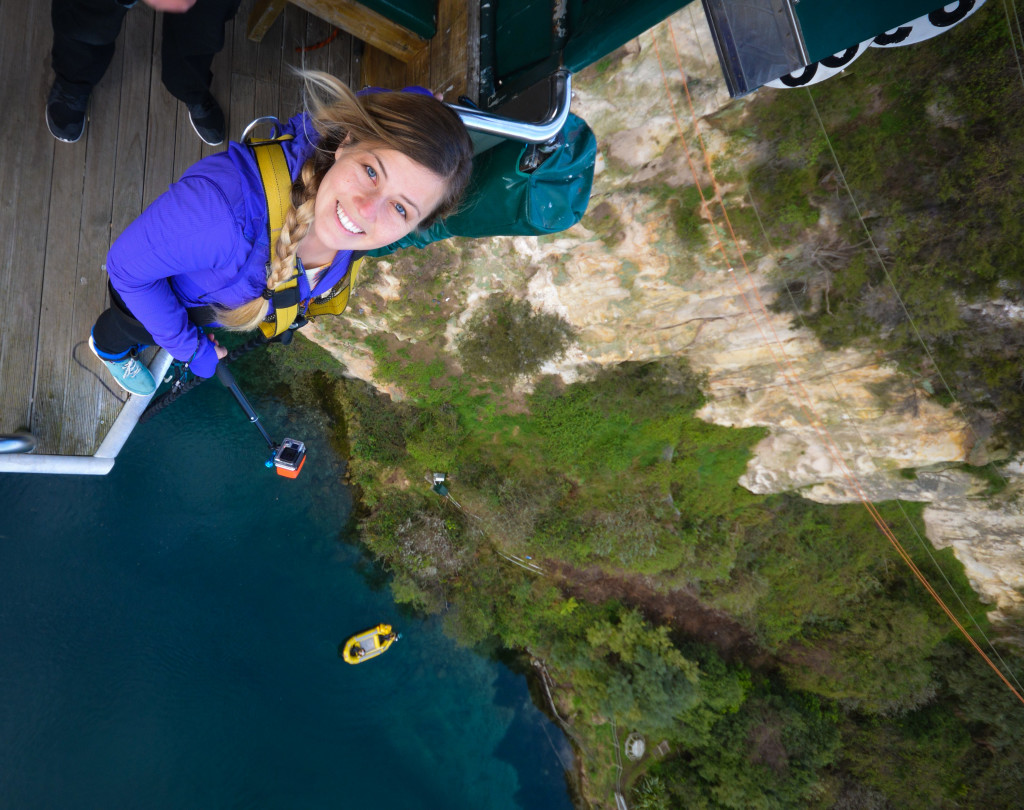 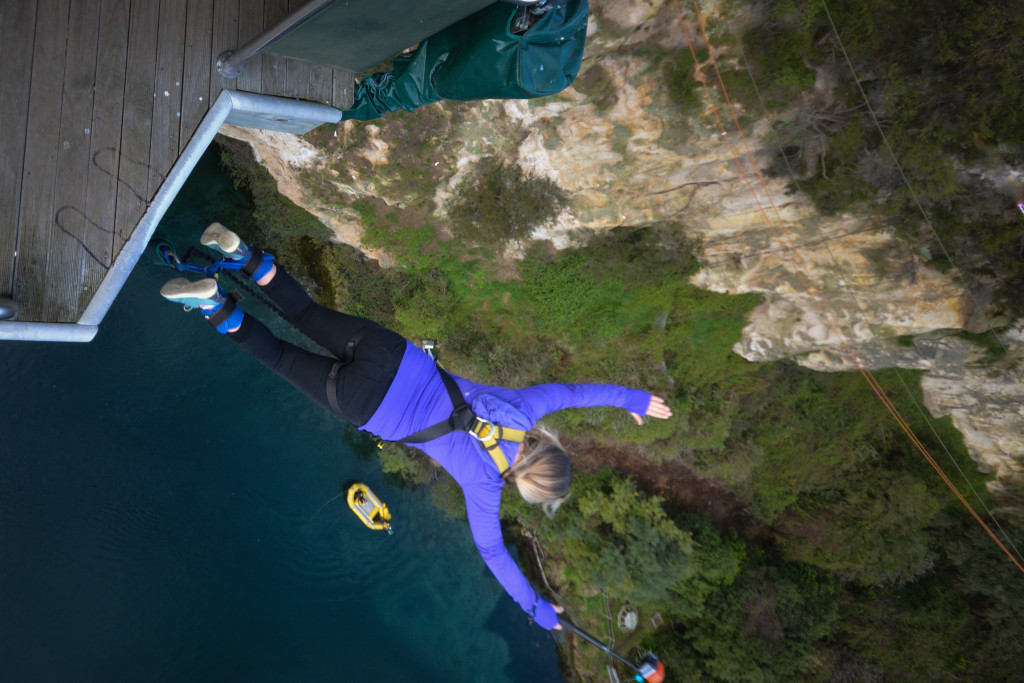 Let’s backtrack a little bit, shall we?

A few months ago, I booked a spontaneous four day layover in New Zealand to get a glimpse of a place I knew would be a favorite of mine. The New Zealand tourism board is clever in that they pre-plan trips for you based on your personality (adventure, leisure, wine lover, etc). Bungy jumping, unsurprisingly, was on the list for those looking for a more adventurous trip. Lonely Planet listed Taupo Bungy as the, “prettiest place in NZ to have a near-death experience” and after catching a glimpse of the scene on Google, I was sold. 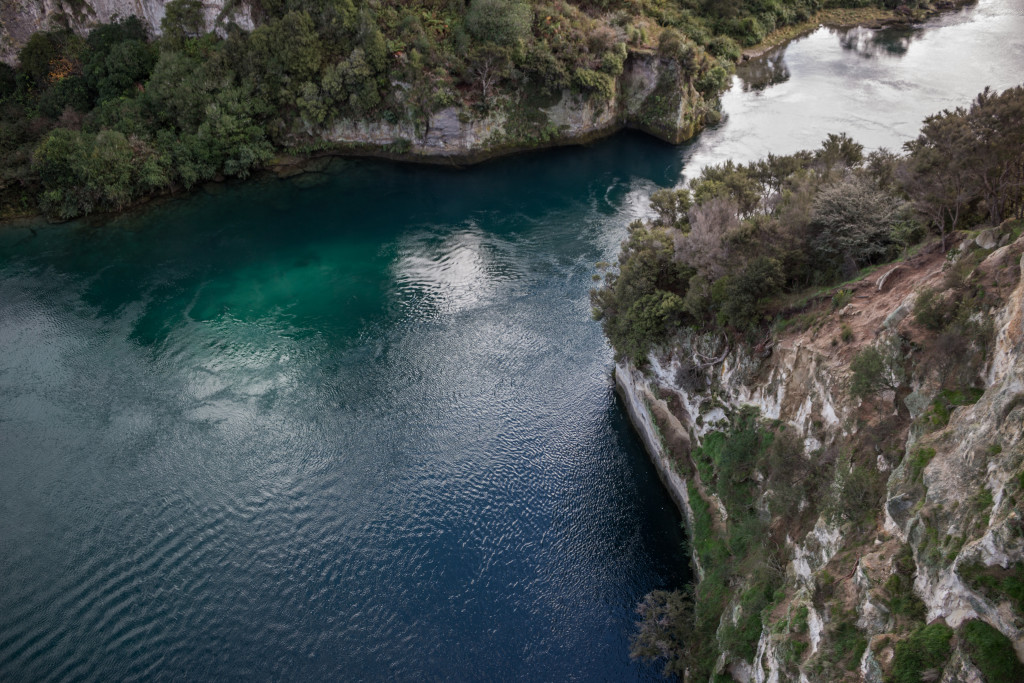 My New Zealand trip was a solo endeavor, and there’s no feeling that compares to walking up to a bungy jump place alone. With nobody to talk to, I muttered a few fevered expletives into my GoPro before turning it off and walking into bungy jump site.

Taupo Bungy has a scenic viewing platform for sadists and rubberneckers to hear the bloodcurdling screams of the jumpers. There’s even beanbag chairs that probably double as therapy lounge chairs for those needing to calm their nerves before jumping. If the adrenaline boost from jumping 47 meters isn’t enough, there’s a coffee station to speed up your heart rate even further. For the first time in my life, I turned down a cup of coffee because a small part of me assumes that bungy jumping and caffeine is a recipe for a heart attack. 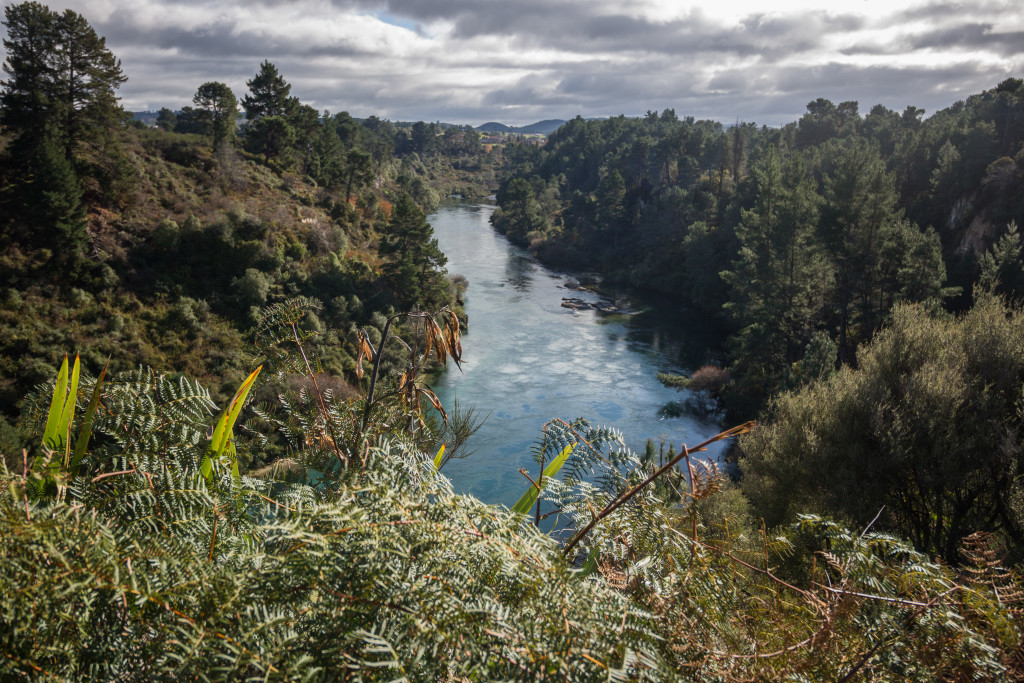 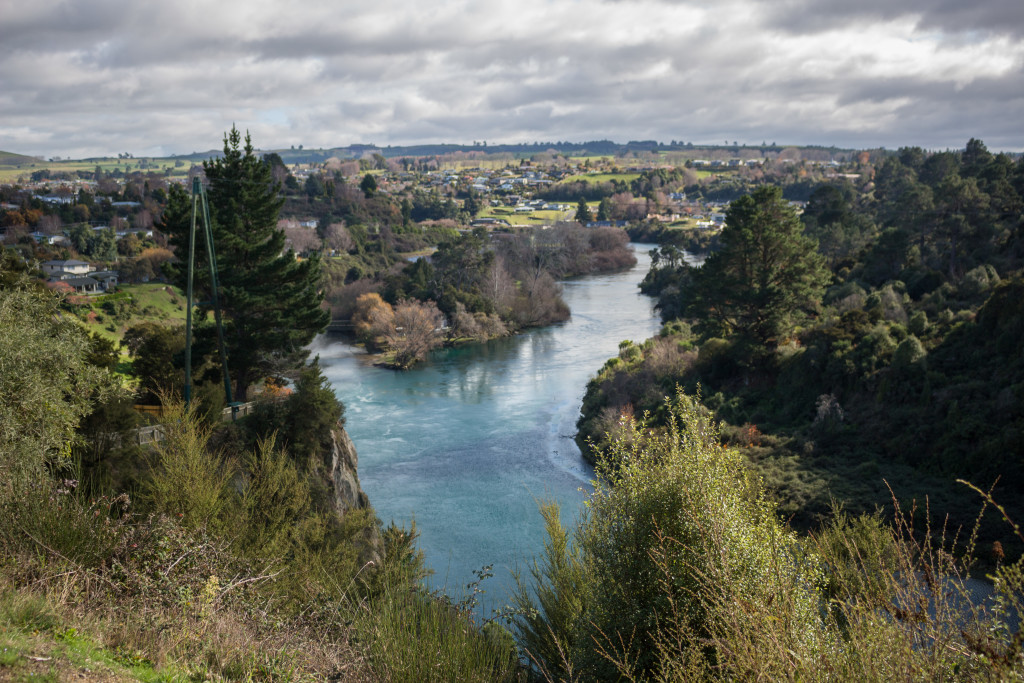 Sometimes friends can be anything but supportive. When I told two of my best friends that I’d be bungy jumping in New Zealand, one of them relayed a story of her own bungy jumping experience in Africa.

“Well my jump was fun. But the girl after me? The rope snapped and… yeah. It wasn’t too good.”

With a conciliatory pat on the back she added, “I’m sure your experience will be much better!”

A few days later, I met up with another friend for coffee.

“I heard that your eyes can pop out of your head at the bottom of the jump because of all of the pressure.”

Was there some anti-bungy jumping convention where everyone swapped horror stories I’d obviously missed out on? Two British men who happened to also be at the platform must have gotten similar memos because the tall one was shaking like a chihuahua, and the shorter one could’ve been mistaken as a mute if he hadn’t muttered, “holy crap…” under his breath. 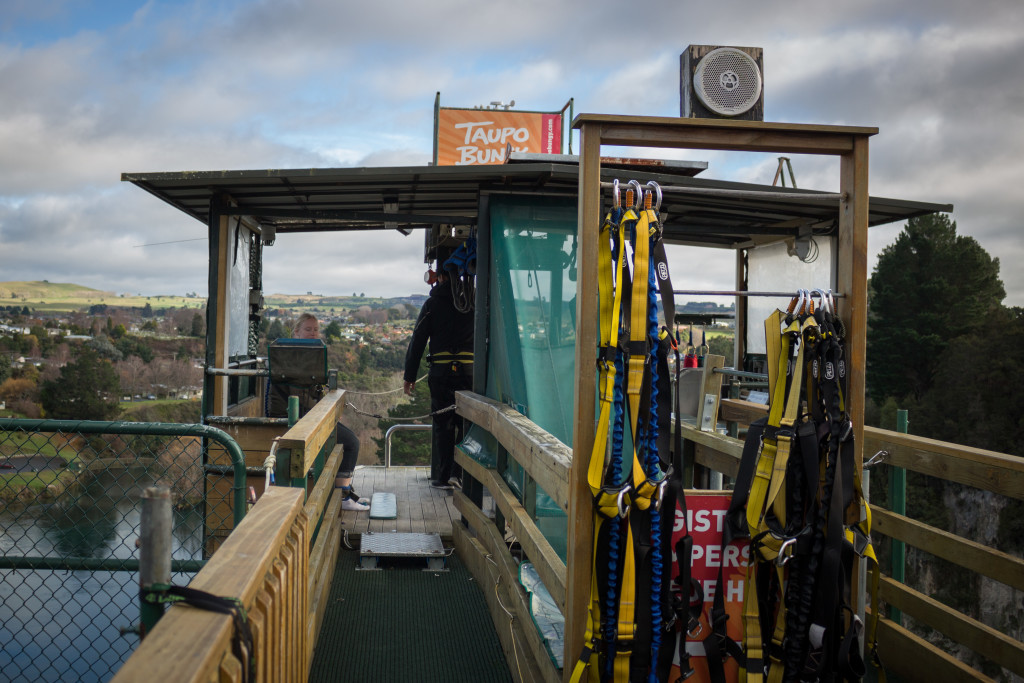 After signing my life away, the jumpmasters at Taupo Bungy weighed me and double checked my equipment. Two people check all of your straps and weight just to make sure you won’t snap the line like a rubber band. I walked to the edge of the jump platform and peered down. 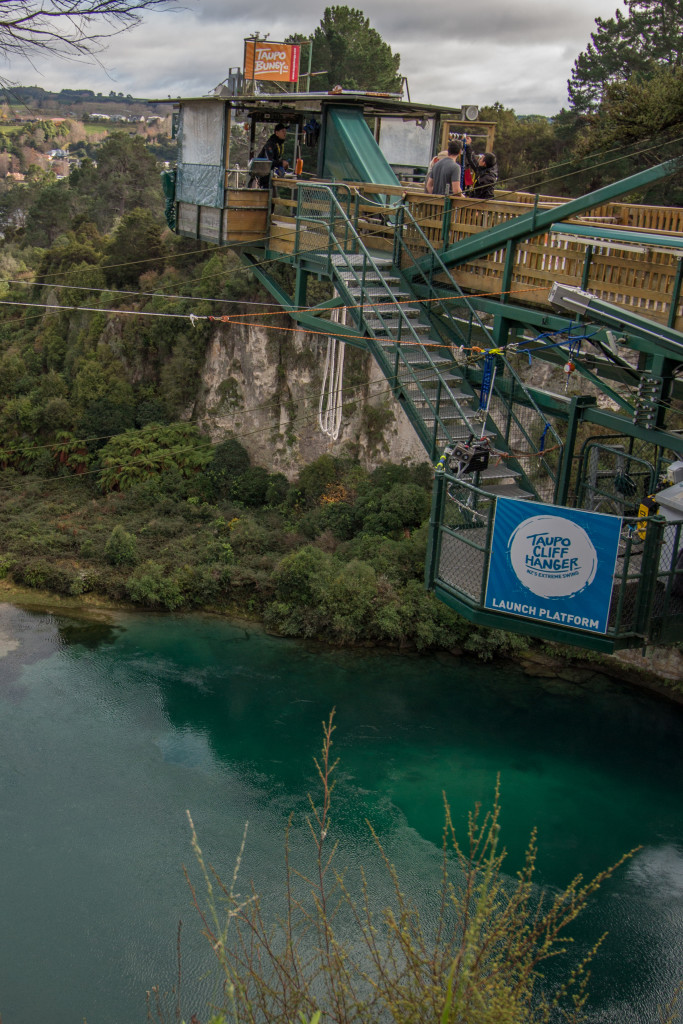 The jumpmasters told me to raise my arms, look down, and fall on the count of three. 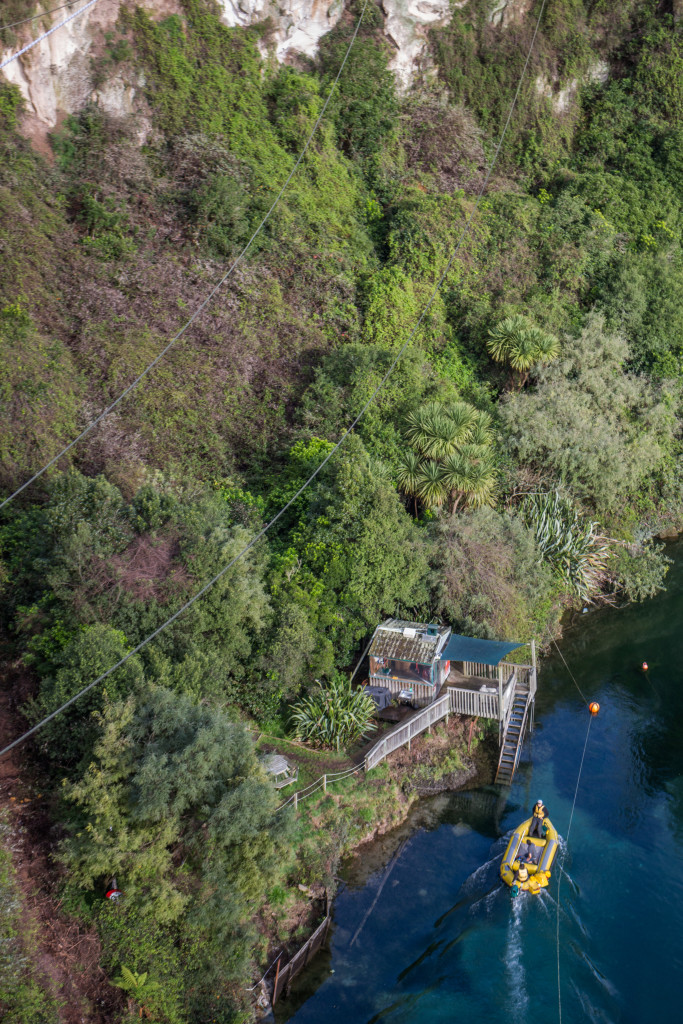 I was gone. The height made me feel so dizzy I’m still not sure if I fell due to free will or if my knees just gave out in terror. The scream I let out startled a few pigeons nesting in the cliff walls, causing them to fly around me as I dangled from the end of the line.

“I didn’t puke!” I proudly told the people gathering me from a lifeboat. There are a few accomplishments in my life that I’m proud of. Keeping my bodily fluids to myself happens to be one of them.

In a state of bliss, I sprinted up the cliff to catch sight of the two British boys jumping. The tall one had chickened out, retreating to the end of the line, while the shorter one became increasingly paranoid. He stalled by requesting that his watch be taken off, irrationally fearful that it could catch on something (like a passing by UFO!?) and amputate his hand. Ever patient, the jumpmasters humored his request and the shorter guy was stripped down to only the essentials – a T-shirt and shorts – despite the freezing weather. Gripping the walls of the platform, the jumpmasters finally coaxed him to let go. He screamed the entire way, confessing afterward that “this had been enough excitement for his lifetime” and that he had little interest in doing something of this sort ever again.

Finally, the tall chihuahua requested that the jumpmasters give him a hearty shove off of the platform because he couldn’t bring himself to do it.

When I was younger, my sister and I made a makeshift amusement park ride called the “Supreme Pee” in front of our grandparent’s house. It was a spin off of a local ride called “Supreme Scream” at the Knott’s Berry Farm. We tied one end of a rope around our waist, and the other end around a tree branch 10 feet above us. We’d climb to the tree branch above and jump off… enjoying our haphazard ride and ropeburn that followed. Maybe this is why I was able to jump so easily in comparison to the others? But ah well… I don’t have enough time in my life for Freudian analysis of self-preservation.

Next, I was geared up for the cliffhanger swing, which is on paper less scary than the bungy jump but was just as terrifying for me – if not more so.

After strapping you in, the jumpmasters use a crane-like device to hover your body over the river. Honestly, I felt like a wrecking ball that had no control over where I’d be smashed into. Dangling like a piece of bait on a string, the jumpmasters surprised me by dropping me mid-sentence. The cliffhanger scares the living daylights out of you for the first few seconds of the experience, but then consoles you a few minutes of taking in the nice scenery. Unlike the bungy jump, you’re reeled back up to the platform and get to freak at the insane height out all over again. From my perception, the cliffhanger seems to appeal to the “soft adventure” personality types who picture themselves in an adult version of a whimsical baby swing. To this I say, muahahaha! You’re in for quite a surprise. A 70km/per hour surprise, to be precise.

With enough epinephrine to make an elephant do a backflip coursing through me, I trekked the trail leading up the Waikato River to Huka Falls. Huka Falls is one of New Zealand’s top tourist attractions and truckloads of people unload to watch the rapids squeeze through a narrow passage over volcanic rock. Again, it’s a bizarre feeling to bungy jump alone and follow it up with a leisurely walkabout afterward. The jump was so fun, it’s inspired me to add bungee jumping in Pokhara, Nepal; Victoria Falls, Zimbabwe; and Queenstown, New Zealand to a list of things I’d love to do. 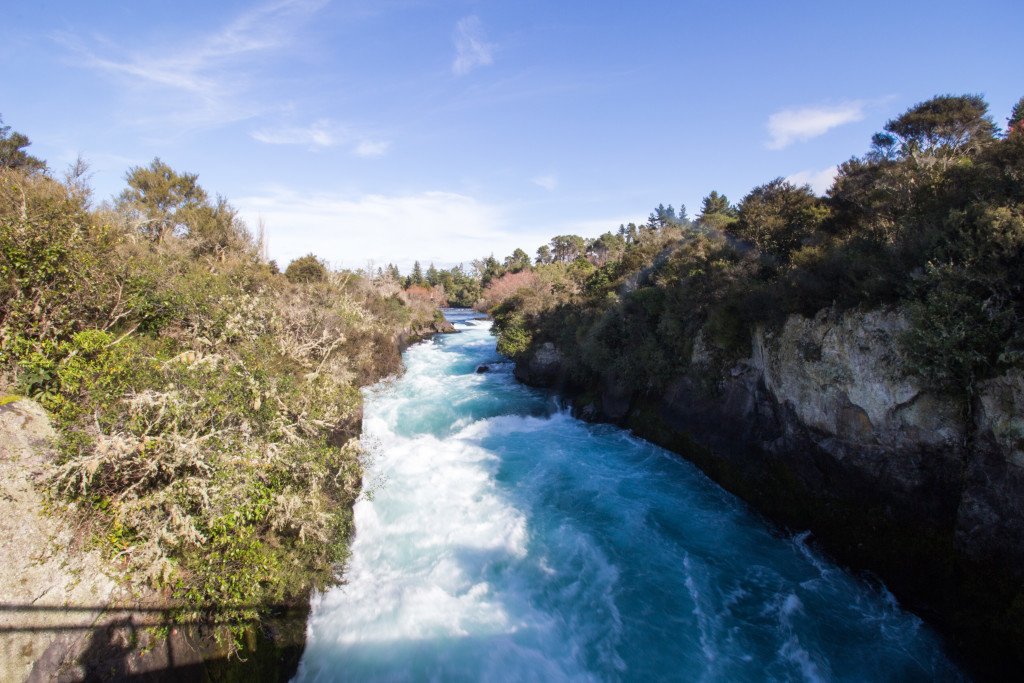 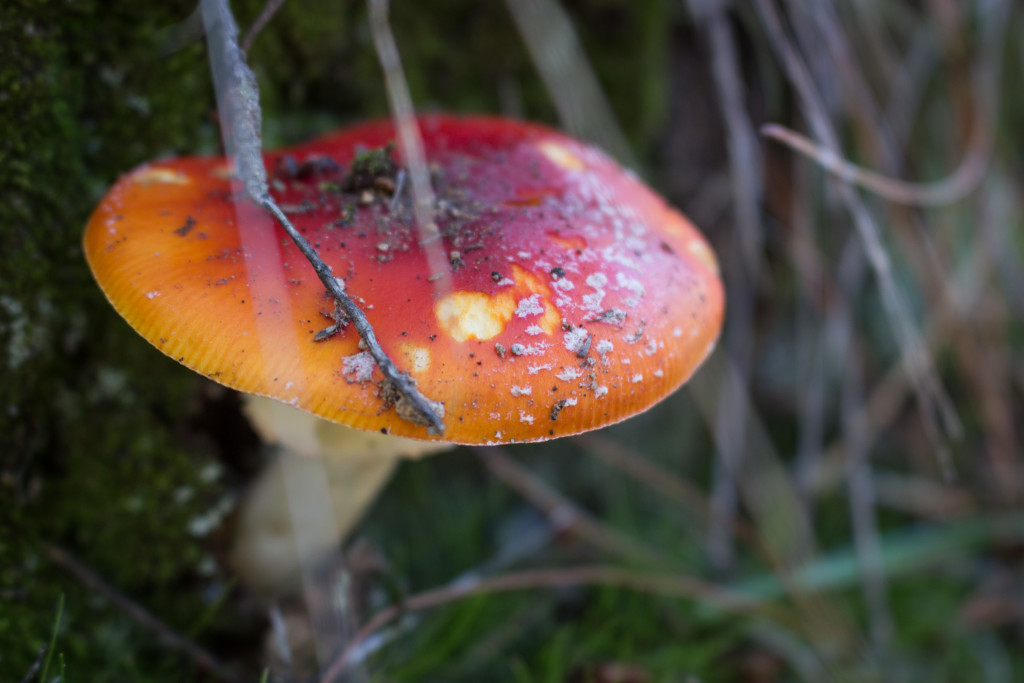 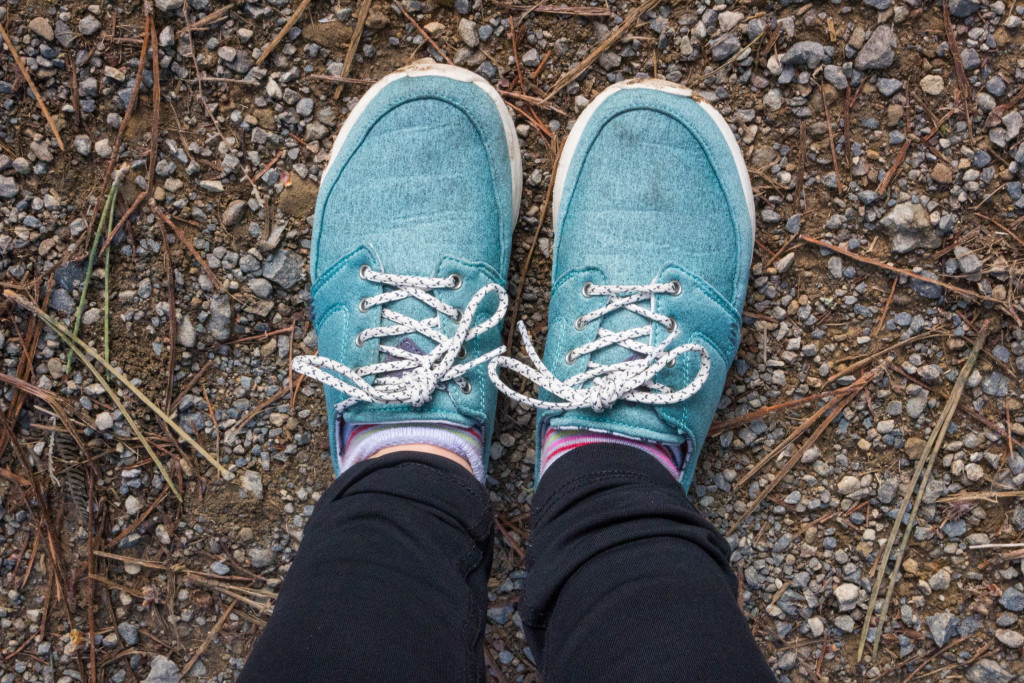 Aside from having a place to throw yourself off of a 47 meter platform, Lake Taupo has an active scene of street art, markets, and welcoming coffee shops. You can rent a bike to traverse around the lake or even go for water sports activities once the weather heats up. 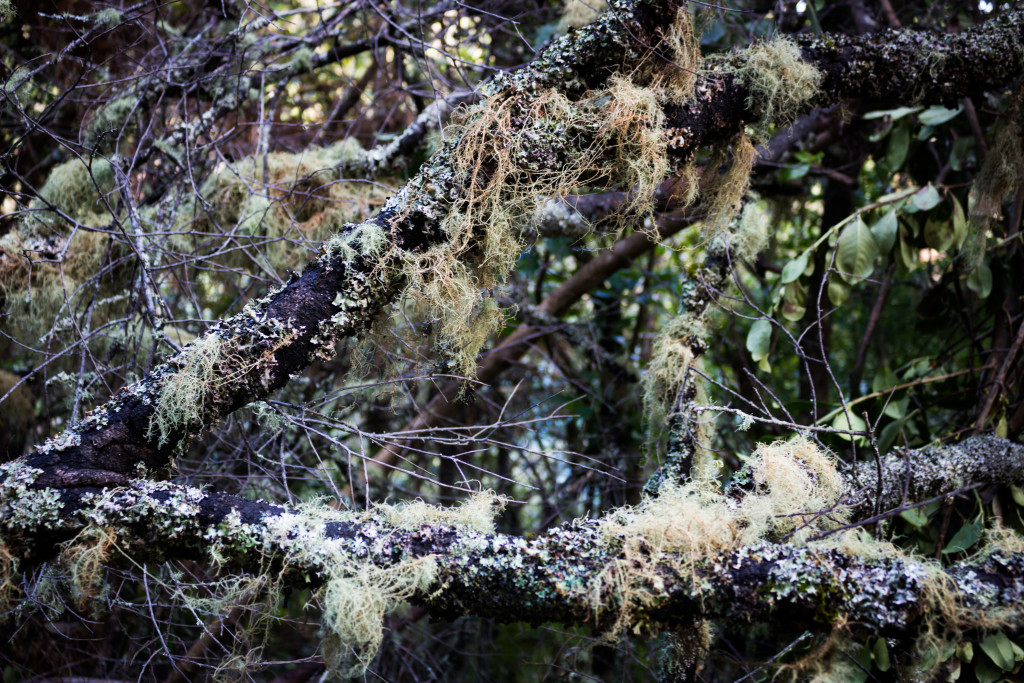 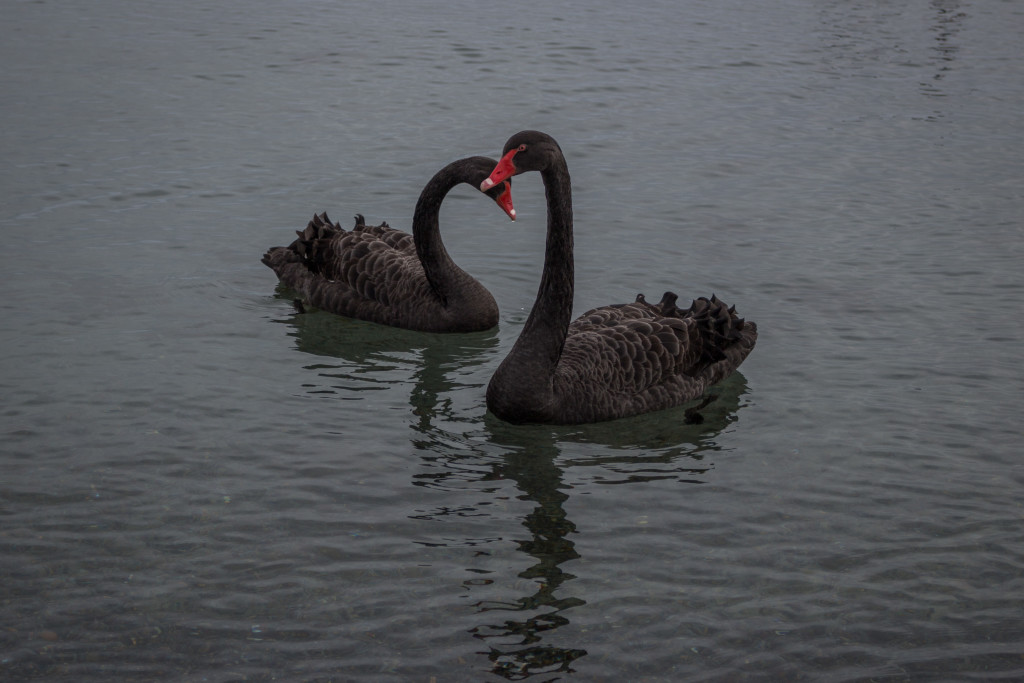 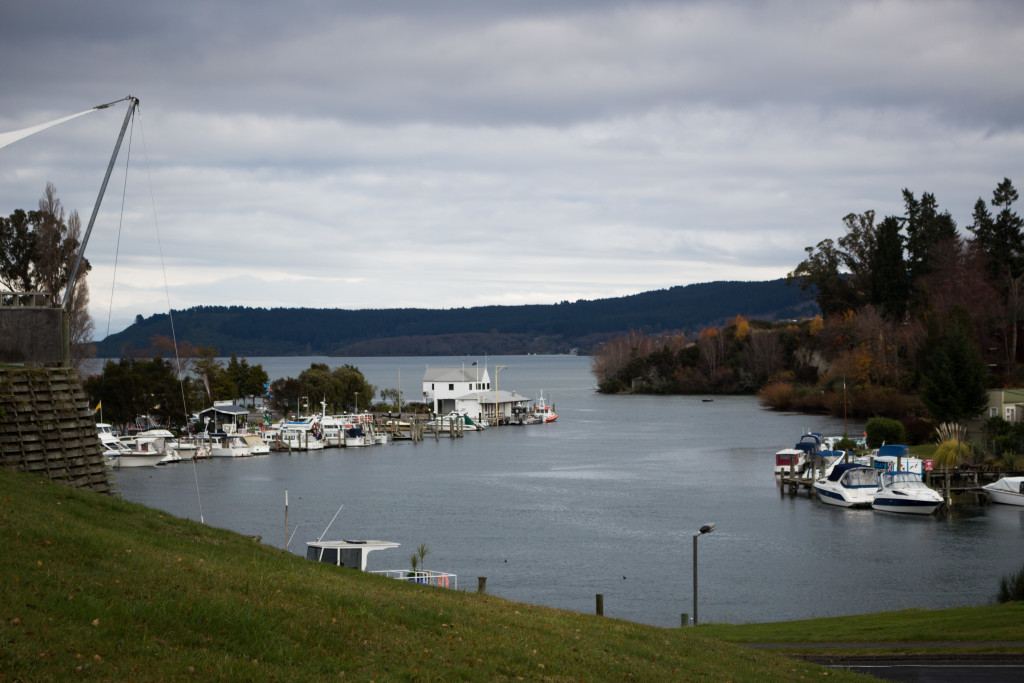 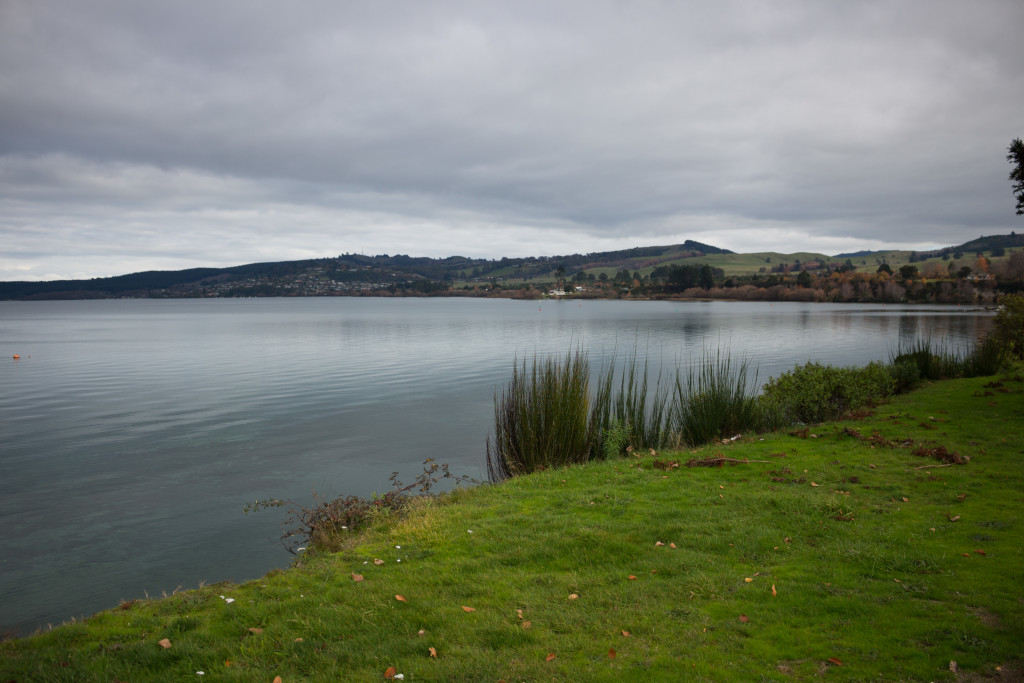 Where to stay: Taupo has a waterfront campsite for self contained caravans to park with nearby bathrooms.
I stayed at Rainbow Lodge Backpackers. It has generally good reviews on TripAdvisor and the staff were friendly. However, the lounge room is a bit dingy with “well loved” couches and the bedding looked similarly “well loved.” The place was just okay. According to a few other backpacker’s, it’s the best in Taupo. I didn’t check out anywhere else so I’d love to hear if any of you have other recommendations in the comments!
Transportation: Getting there, use the Intercity Bus. Getting around, you can walk virtually anywhere or rent a bike for around $30 NZD/day.
Taupo is also a great place to base yourself out of for the Tongariro Crossing. 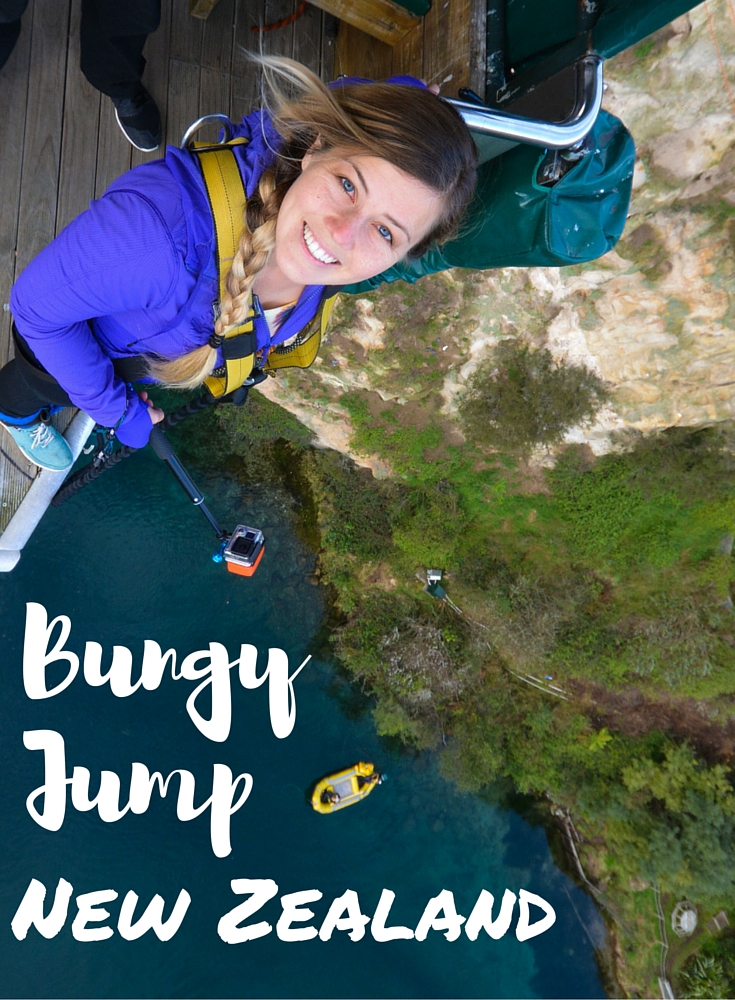 Many thanks to the adrenaline junkies at Taupo Bungy for hosting my jumps and providing some of the media for this post! As always, all opinions are my own.