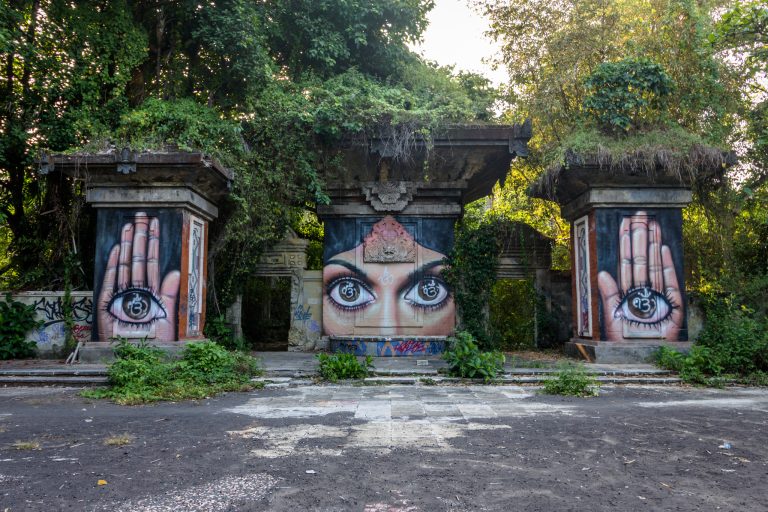 Many Balinese people won’t visit abandoned properties in fear of the malevolent spirits that take up residence there. About twenty years ago, a wealthy investor and the Indonesian government started building a theme park, Taman Festival Bali, in hopes of it being a tourism hot spot in the heavily-trafficked city of Sanur. Taman Festival Bali would cost $100 million and lure customers in with its $5 million laser show, the main attraction. 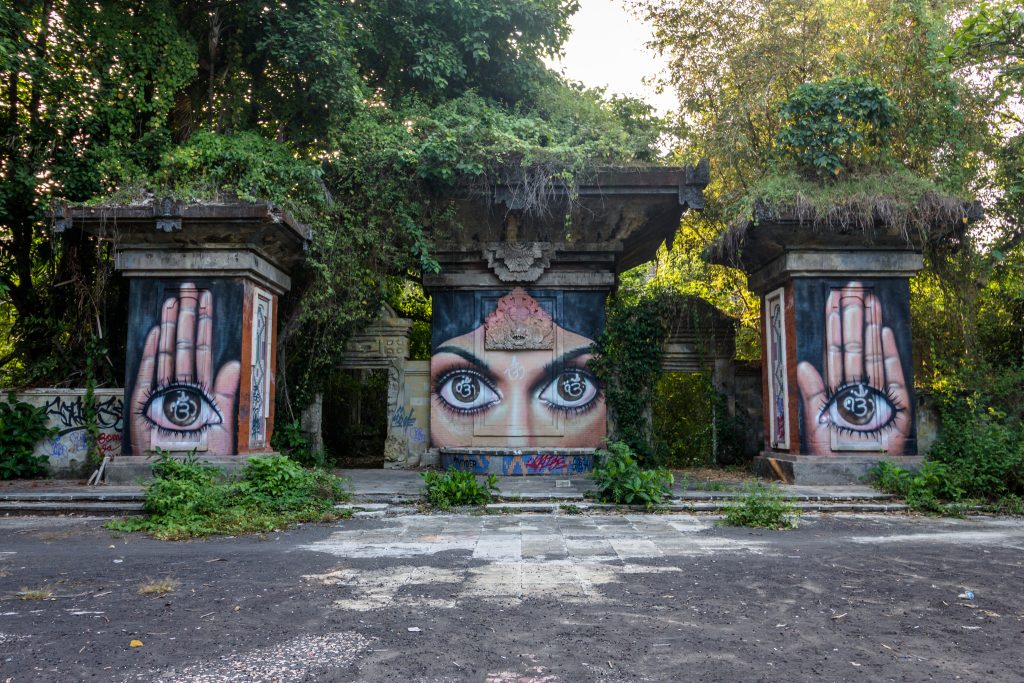 It’d be fun, profitable, and really showcase Sanur as a must-see destination.

A string of bad development decisions, a lightning strike that hit the laser equipment (still looking for a reliable source for this fact), and the Asian economic recession caused the project to go bankrupt. The Indonesian government couldn’t find anyone to purchase the failing Taman Festival Bali. The park was abandoned with mother nature, spirits, and urban explorers taking over instead.

Getting Inside Taman Festival Bali

I know I had to go check out the theme park for myself — not only because I was interested, but because I’d pitched it as a story for a magazine and needed the money. Relief hit me when Robyn, blogger at Robyn Around the World, said that she wanted to check it out too.

Robyn is one of the savviest travelers I know. She knows the going rate from Uber rides to phone SIM cards and never falls for scams.

We walked up to the abandoned theme park. A group of men smoking cigarettes gathered out front.

I started rummaging through my purse for the correct change.

“No we don’t. This place is abandoned. Where’s that advertised? Do you hand out receipts?” Robyn demanded.

A second man walked up to the first and started laughing. “No receipt. Pay in cash.”

The amount was equivalent to $1.

Robyn spun on her heel and walked up to a cranky gatekeeper, who we’d been scammed into paying just a few minutes earlier. Our Uber driver drove the extra 10 feet into the gate and dropped us off inside of it, when we really could have just walked in from the entrance… but anyways. This is how life for tourists in Indonesia tends to go.

“The entrance to the festival, how much is it?” Robyn asked.

The gatekeeper made a phone call — probably to the group of men standing at the entrance.

I needed pictures of Taman Festival Bali for a story, so I had to go in whether the entrance fee was $1 or $10.

We paid the group and walked into the theme park past the old ticket booths. 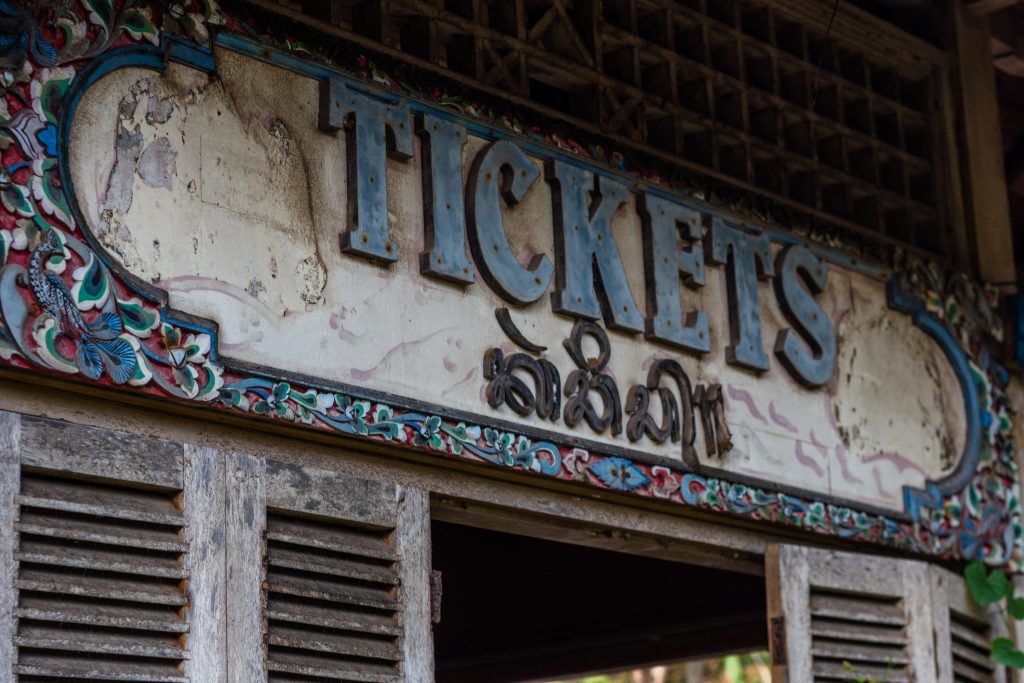 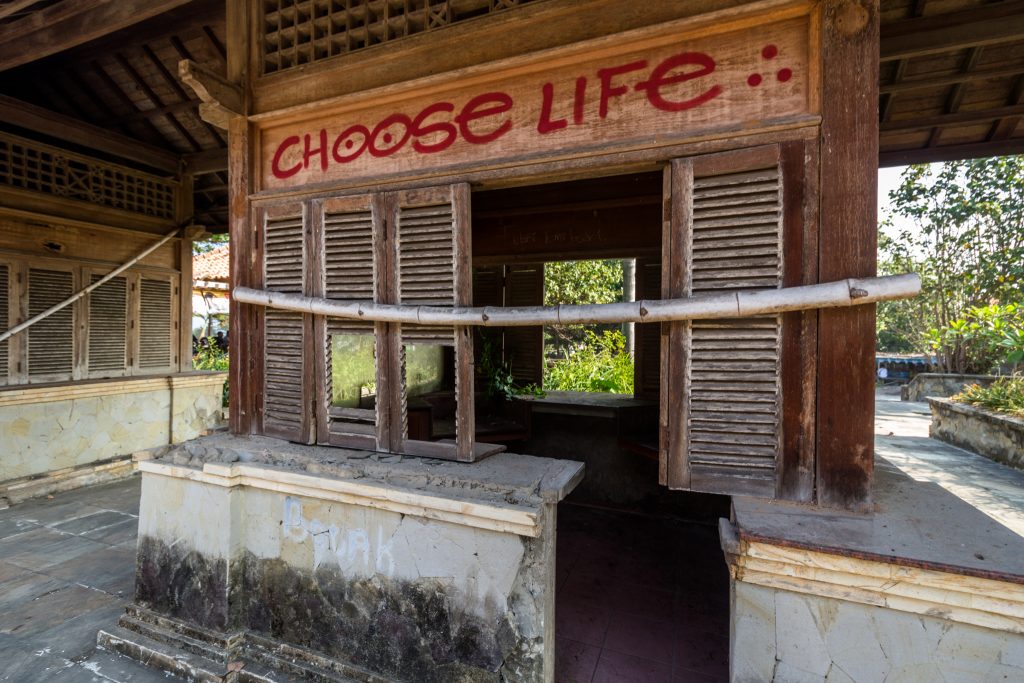 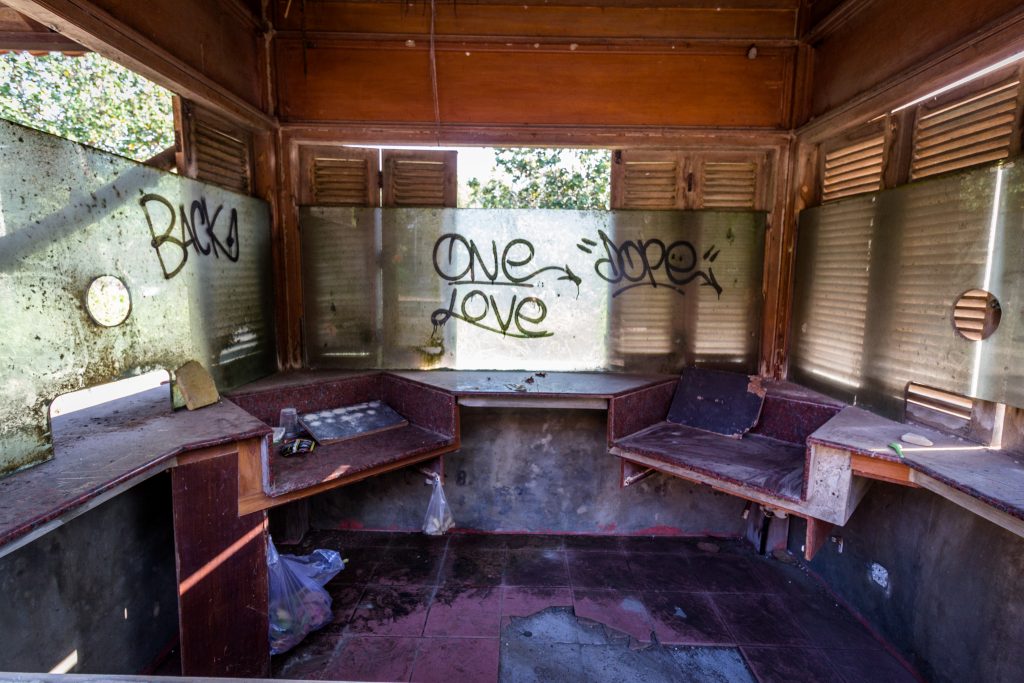 The roof of an old arcade room sagged, threatening to collapse on us. Street art covered every wall. Jungle vines wrapped around pillars and decapitated statues. An eerie vibe hung amidst the heat and humidity. Dust clung to every surface. Moss crawled up the indoor walls. 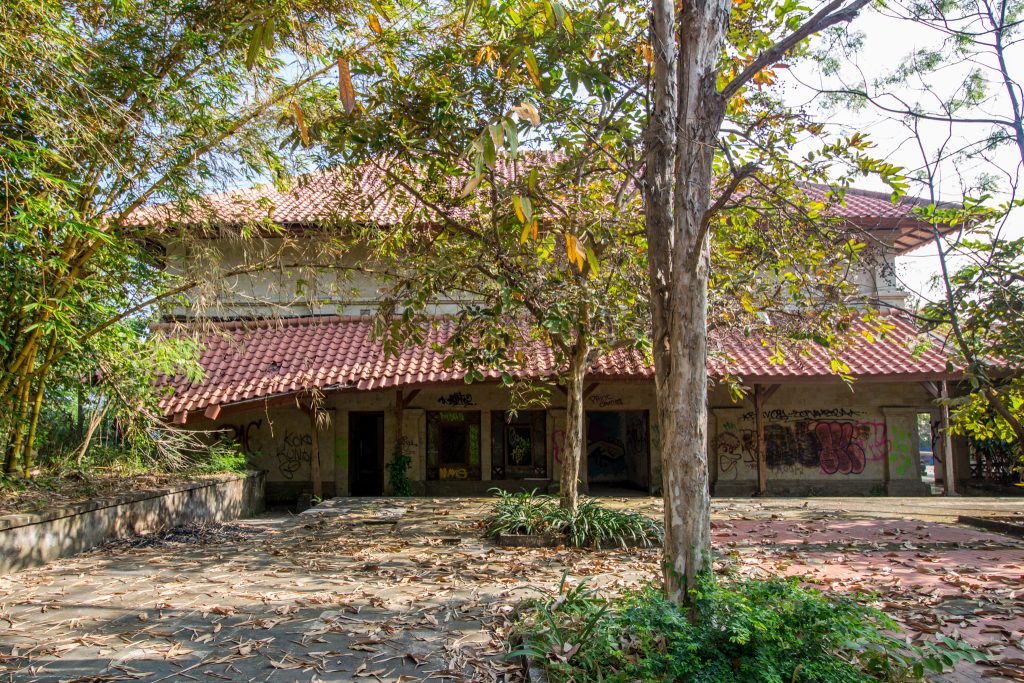 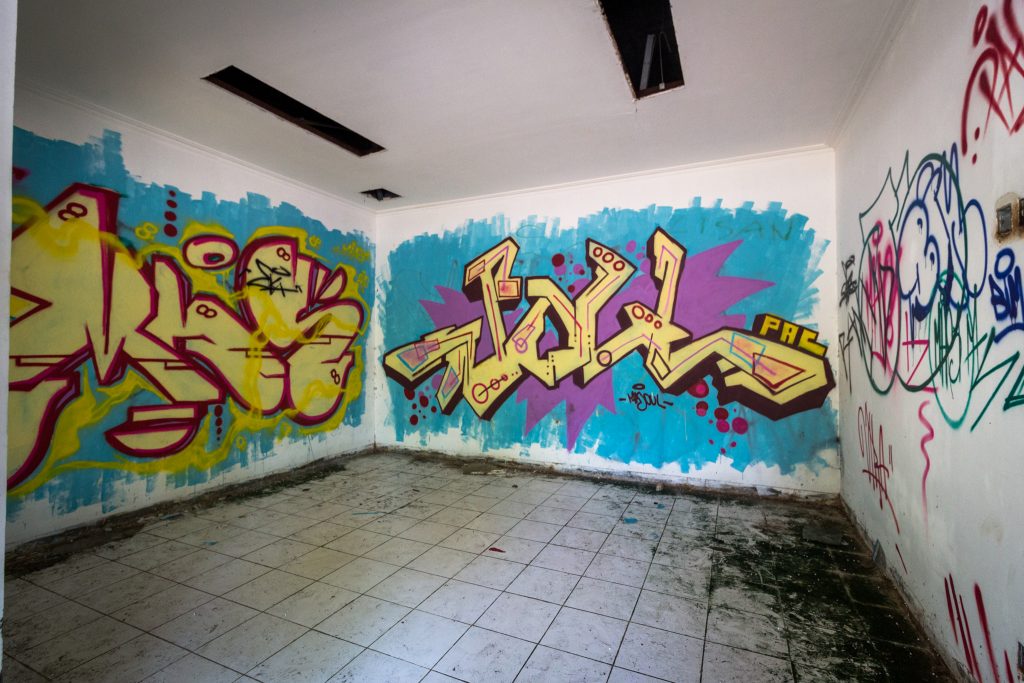 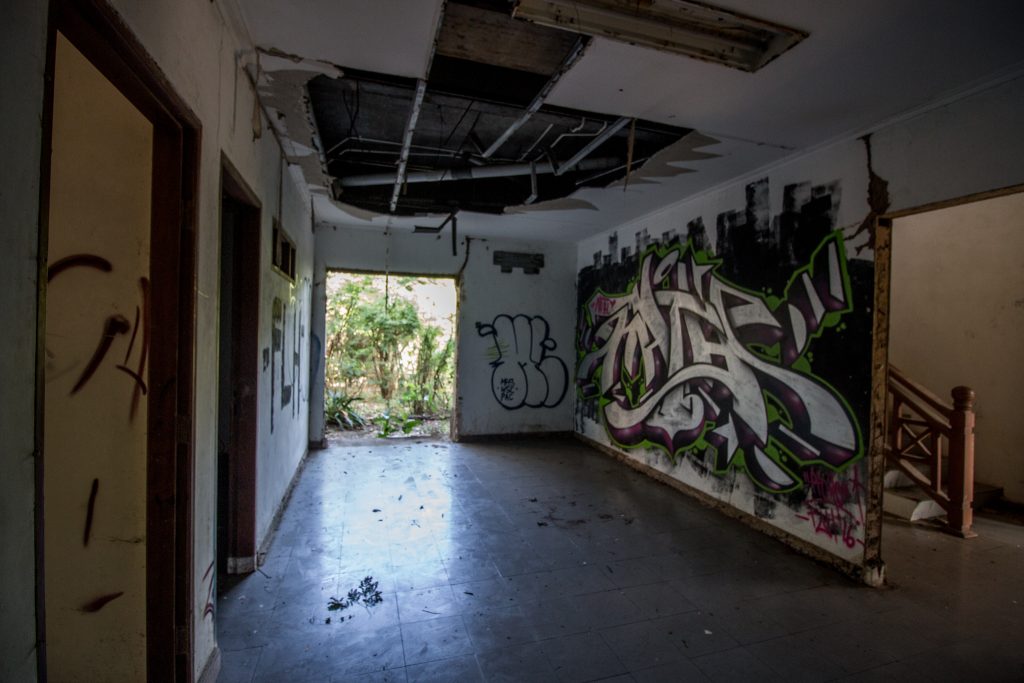 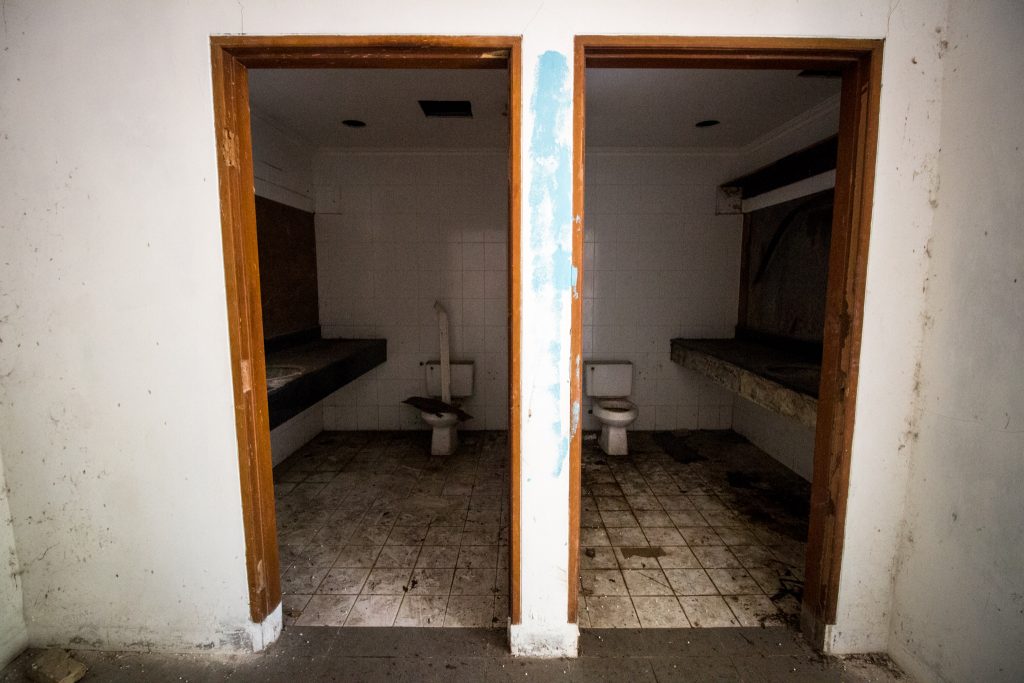 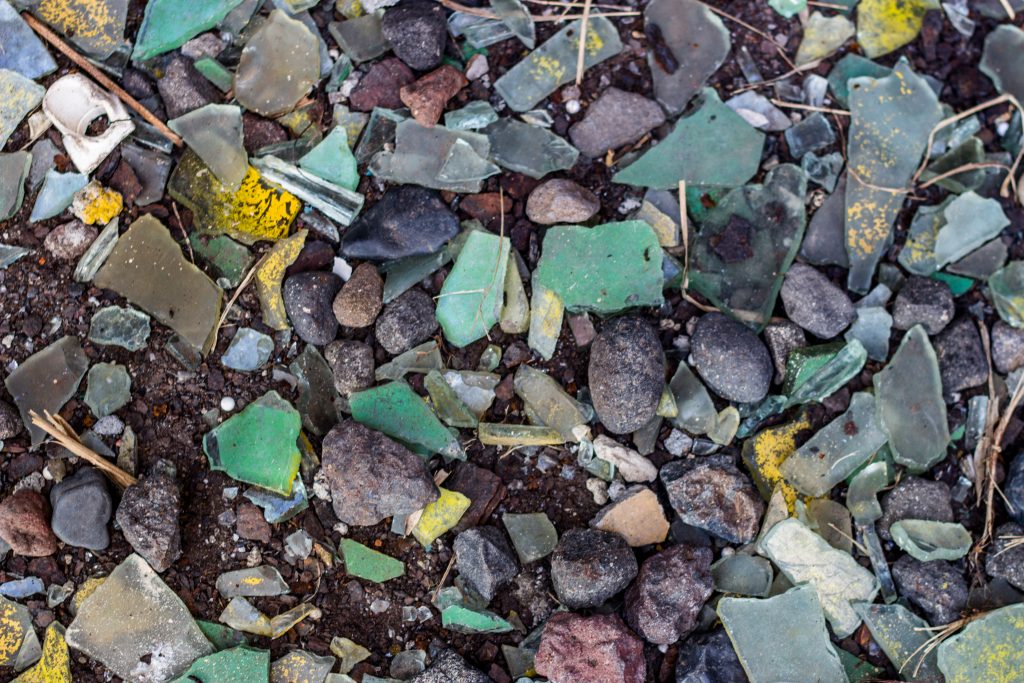 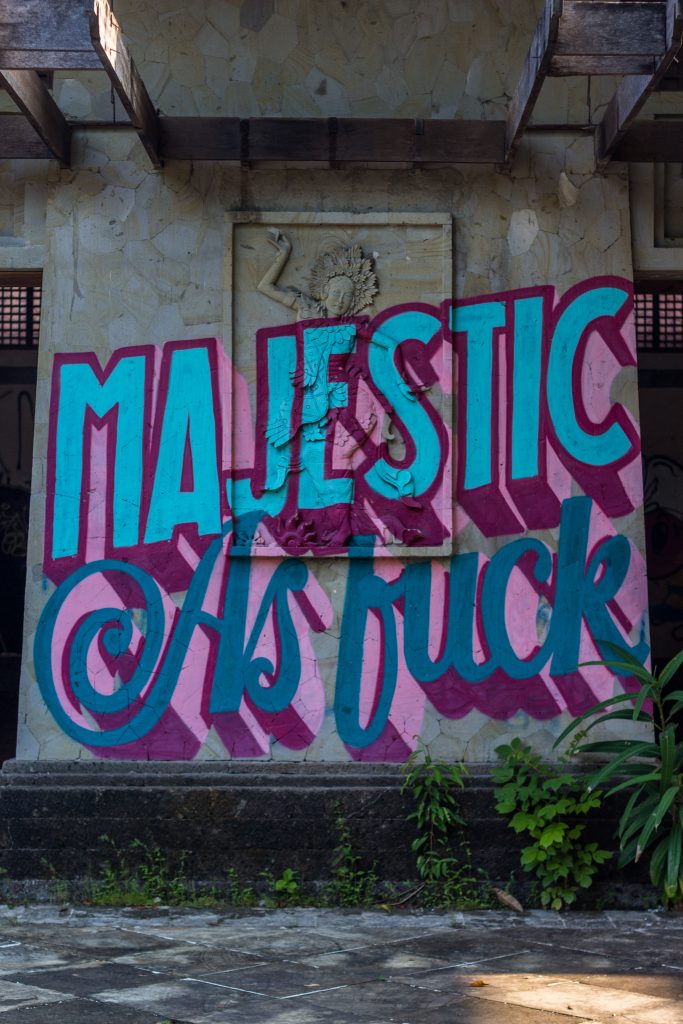 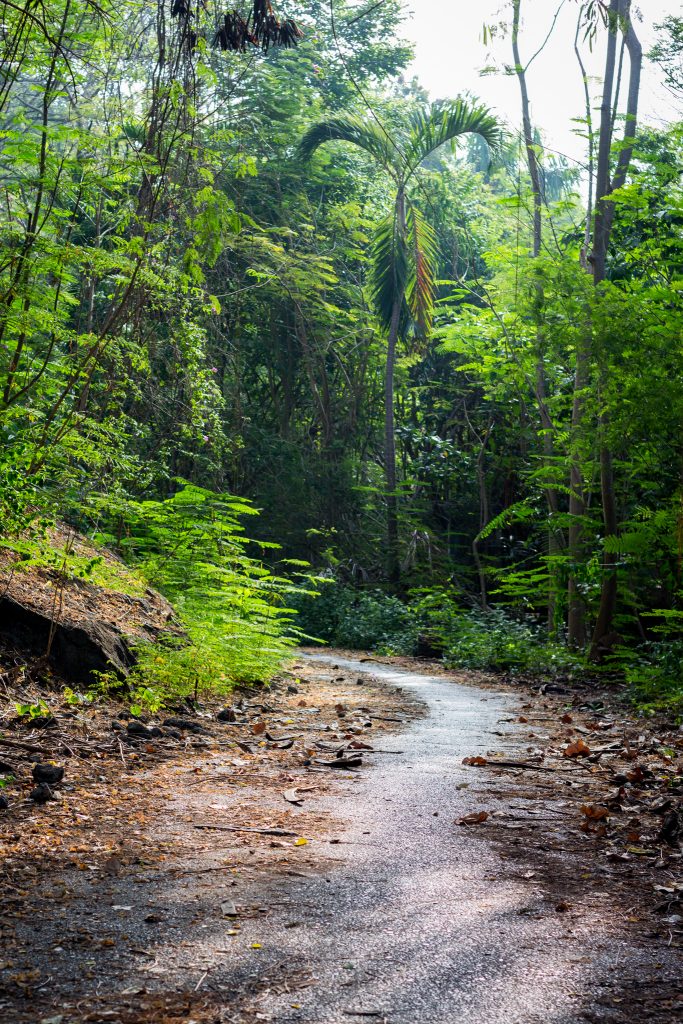 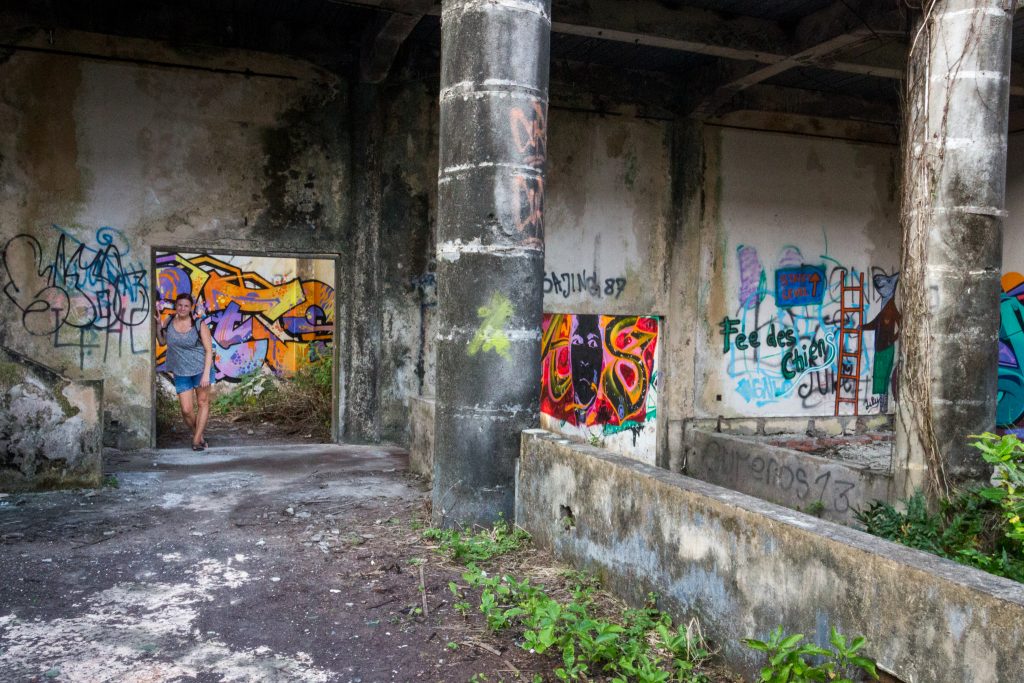 But seeing as there’s a children’s school right next to theme park, I have my doubts about this rumor.

As we walked deeper into Taman Festival Bali, the trails became thinner and thinner, with a thick layer of leaves covering nearly every inch of the sidewalk. Though Robyn was calm, I felt paranoid. A tall, lanky, man seemed to follow us everywhere we went — disappearing behind the rubble as soon as we’d look his way, like a shadow. 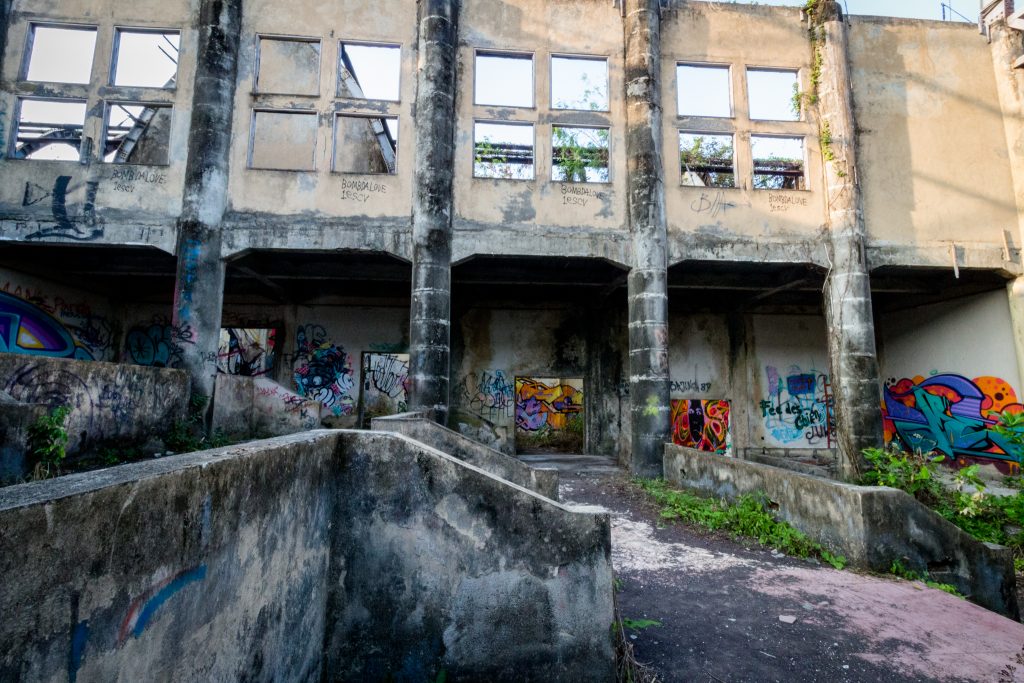 “He’s so creepy,” I muttered to Robyn.

The sound of a motorbike stirred in the background and I ducked behind a slab of concrete to stay unnoticed. Out of sight, I remembered that the Balinese hate this place because it’s the resident spirits that are evil, not the humans.

Mosquitoes, spiders, and other insects buzzed throughout the jungle.

Throughout the abandoned theme park, decaying canang sari, Balinese daily offerings that honor mankind, the gods, and the animals, littered the floor. The daily ritual of creating and offering canang sari is seen throughout the entire island of Bali, but it’s strange to find them in an area that’s abandoned by people.

The path weaved us past the fabled crocodile pit and back to the entrance of Taman Festival Bali, where a swing made of vines hung down from a gargantuan tree. Robyn and I took turns swinging in a setting surrounded by stray animals, graffiti, broken glass, and decrepit ride signs. 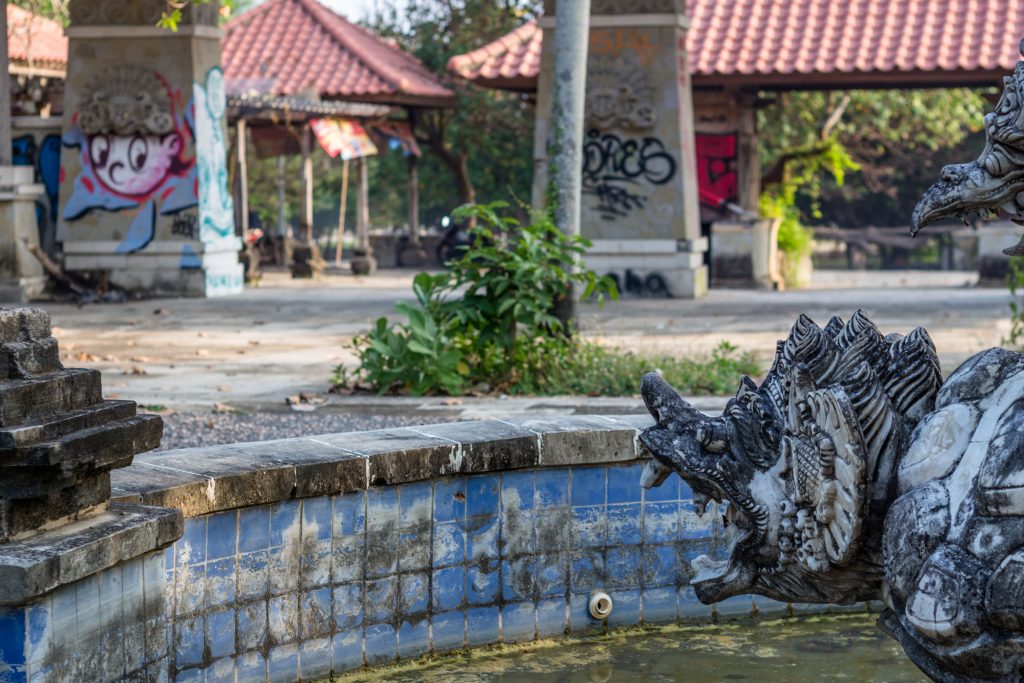 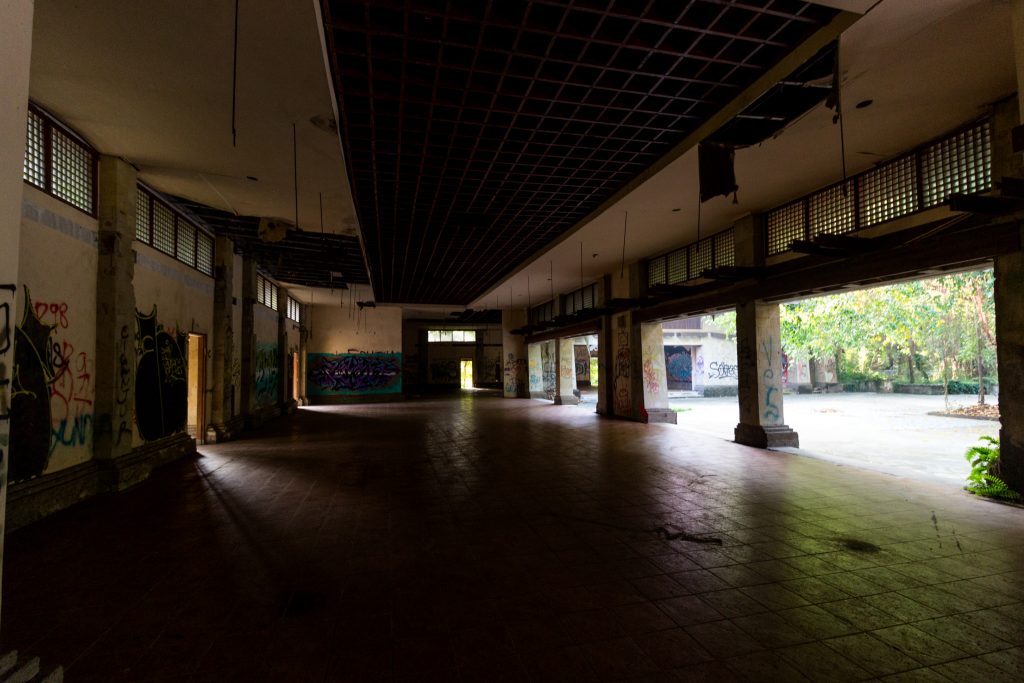 The biggest surprise to me during my visit to the theme park was how quickly nature reclaimed her territory, like a Hollywood scene in an apocalyptic movie. Mankind may have control over the earth for now, but there’s always the physical and paranormal world to take over once we step away. 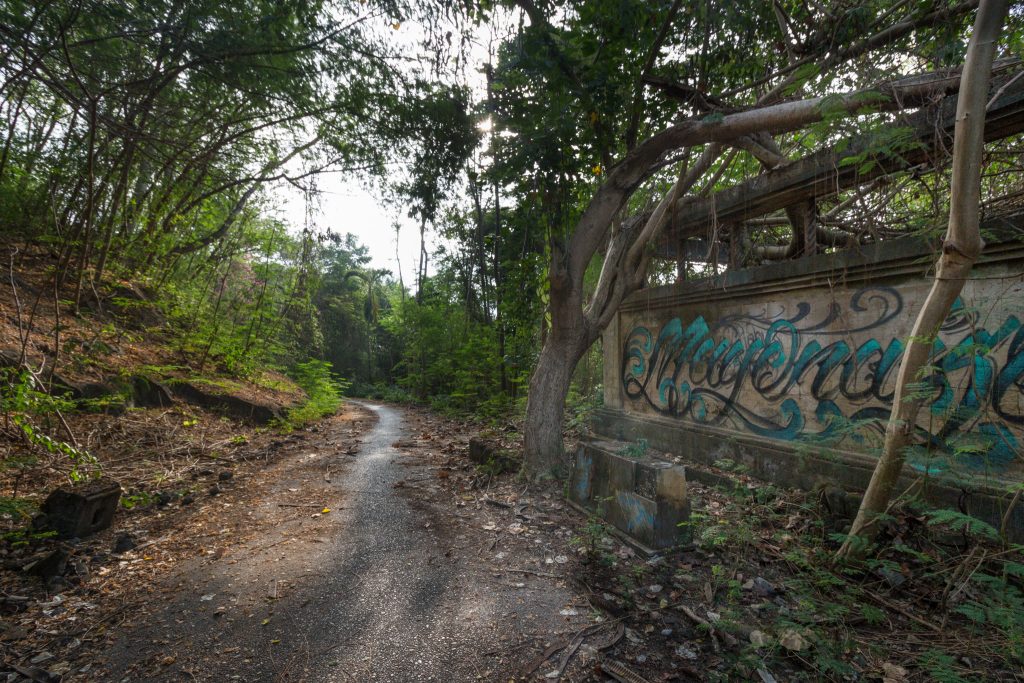 What you Need to Know about Visiting Taman Festival Bali

Getting to Taman Festival Bali: Don’t expect locals to know where or even what the place is, as most of the people I’d talked to had never heard of it before. The address is Jl.Pandang Gakak, Sanur, at the end of the road near the beach front. You can easily cycle to it from the main area of Sanur. Plan to spend about an hour inside.
What to wear and bring: There are insects everywhere at Taman Festival Bali. Don’t make the mistake I did — bring bugspray and water. Wear loose long sleeves and closed toed shoes.
Should you pay the bribe?: According to other reviews and stories, you can walk through without paying the “entrance fee” and nothing happens. However, I’m always a bit weary of choosing my battles — especially as a female traveler. If you’re alone, I’d pay it. If not, it’s up to your group. Though one Tripadvisor review says, “Don’t worry about the men on Mondays with their guns – they’re just having a bit of fun!” If there’s guns around, pay the fee.
Is Taman Festival Bali haunted?: Maybe yes, maybe no. The Balinese certainly think it is. Only one way to find out, right? Typically, tourists only discover its existence when they are searching for festivals in Bali. Imagine their surprise when they find this! 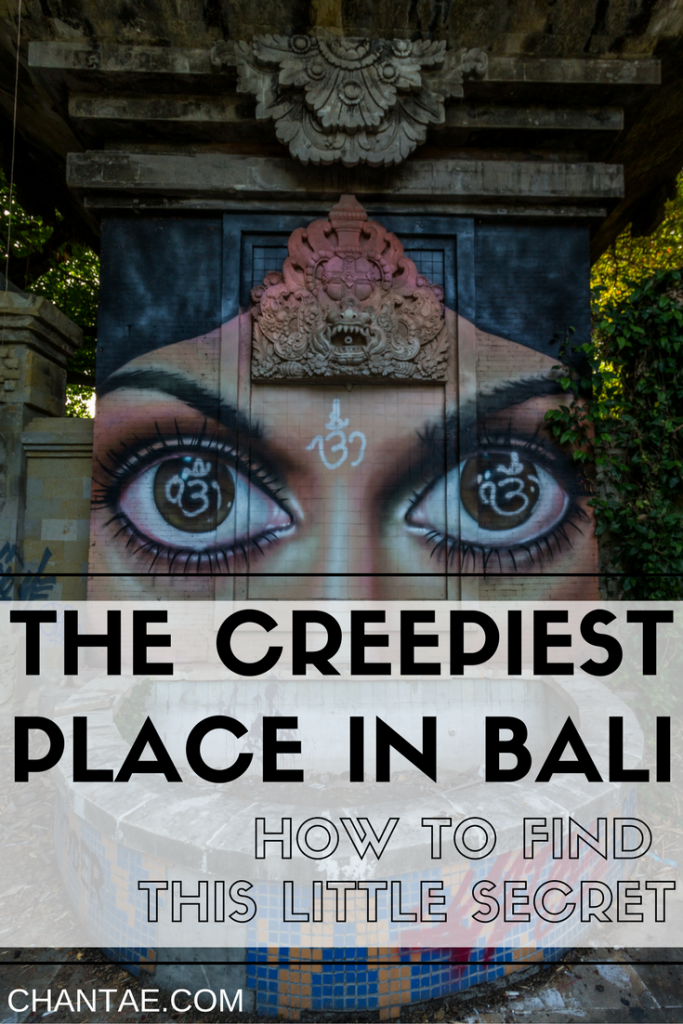 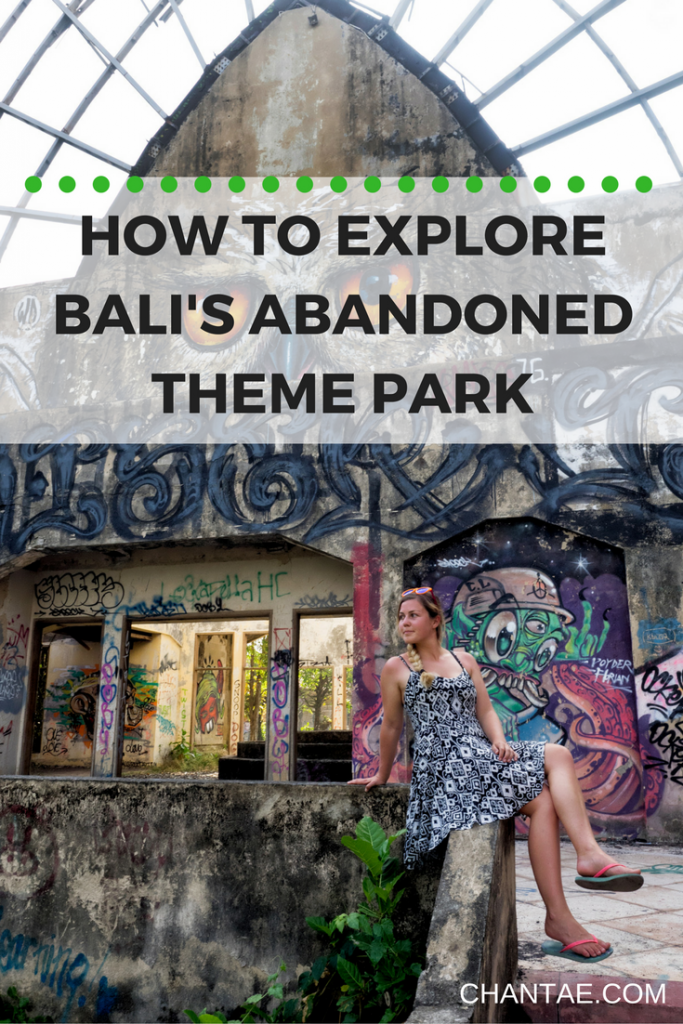