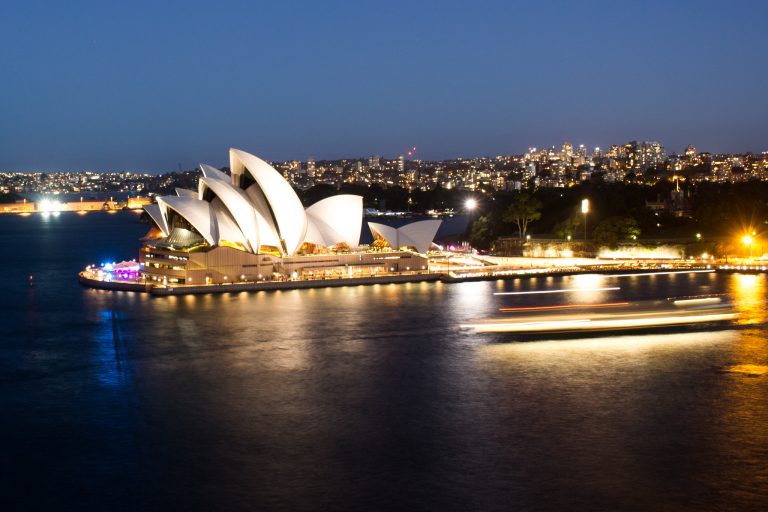 Australians might snub those who incorrectly think that Sydney, not Canberra, is the capital of this sun-scorched country. But are outsiders really the ones to blame? Sydney is by far the largest and most populated city in Australia, often grazing news articles around the globe. When I tell people I live in Australia, they automatically conjure images of crowded beaches, the Sydney Opera house, and recite “P. Sherman 42 Wallaby Way, Sydney” in a voice that’s always impressively nasally. Despite all the hype, it actually wasn’t until a few months ago – two years after moving to Australia – that I finally discovered what all the fuss was about for myself.

I took advantage of Sydney’s public transportation system over the course of a week while Mo attended a conference. Here’s a snapshot of one of those days.

Call it cheesy, call it a tourist trap, but the first thing I had to see while exploring Sydney: The Opera House. Hordes of tourists flocked with selfie sticks to the entrance, positioning themselves perfectly in front of the structure. A young, buff German man approached me with two taut, generously bosomed, twin beach babes on each arm.

“Can you take our picture? Nobody has been able to get it right so far.”

Ugh. What is it about walking around on your own that leads others to assume that you’re chomping at the bit to take their photo, desperate for any human interaction?

The girls puckered their lips and positioned themselves on each side of the man’s cheek. Raising his caterpillar eyebrow, he then shot a smirk and a thumbs up for the camera.

“Wow. Looks incredible.” I said without an iota of sarcasm.

“Eh, can you take another?”

They posed again. The girls’ backs arched so much, I feared they’d snap in half.

After six rounds of photo taking and repositioning, I shoved the camera back into his hands and bolted away. I suggested that they learn how to use a tripod and self-timer (like the rest of us vapid folk). From the side of my eye, I saw Tweedledum and his Tweedledees approach another victim for more pictures. And because it’s Australia, the closest shop to swipe your credit card at near the Opera House is of course, the UGG store.

I walked through the Royal Botanic Garden, perfectly primmed in a way that only countries that tax the bejeesus out of their citizens can prim. The park weaves through downtown, bordering the harbor and home to oddities like water birds and pink bananas (that apparently aren’t very tasty). I unzipped my backpack and pulled out a Tupperware with a soggy tortilla wrap inside. It’s not in desolate or natural places that I usually feel alone, but in big cities instead. Couples embraced under a shady tree, friends laughed at their phone screens, and tour groups obsessed over the words of their guide. Spending the day alone in a place where company isn’t an option is easy – being alone in a place where you share an experience simultaneously with hundreds of people and no one, is much harder. Then again, my main prospect for company that day viewed me as a human tripod, so hanging solo isn’t that bad after all. At sunset, I walked up the steps of the Sydney Harbour Bridge – apparently the happening spot during sunset in a city like this. Without a cloud in the sky, I could see ocean and building-smothered land for miles. Security guards stood every few hundred meters and though they mainly focused on the joggers and DSLR wielding tourists pacing over the bridge, I occasionally caught their eyes tracking a boat slowly driving in and out of the harbor, just as mesmerized as I was. Grids of thick metal hung above us, like strings on a puppet suspending us over the sea. A tall, barbed fence curved inwards to prevent people from climbing over and jumping into traffic or the water below. At the end of the bridge I sat on a small bench and waited for nightfall. I heard the chattering voices of people walking past, breathed the fumes of the thousands of cars making their daily commute, and goosebumps raise as the sun disappeared. A month earlier, I’d quit my job to pursue one of the world’s least stable professions. A loop of self-doubt played in my mind as I watched a girl my age stare upwards, fixated on the cables above.

The sky turned black. I stood at the edge of the bridge to admire the lights of the city. I rested my forehead against the fence and lost count of the blurs of boats below. I relished in the ability to stare out into the sea as long as I wanted, with nobody to pull me away.