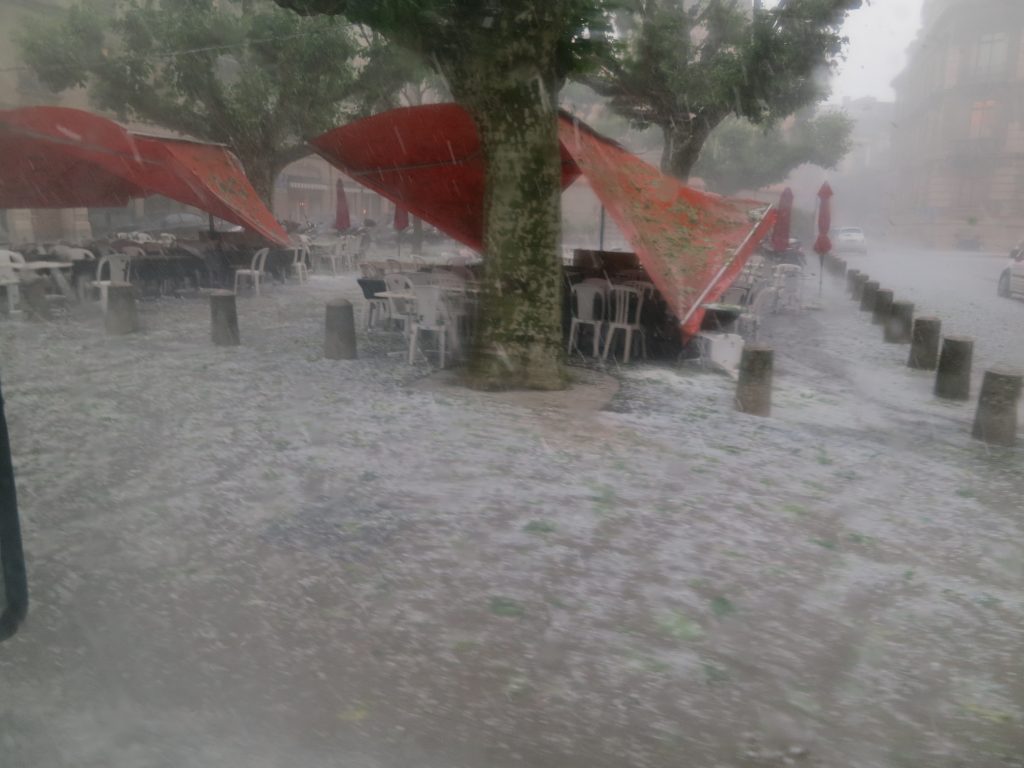 The hail smashed the canopy of a nearby restaurant.

Switzerland Tried To Kill Me

This post is simply about the first hour of my stay in Geneva, Switzerland.

My train arrived in Geneva and I immediately bolted to my next couchsurfing host’s house in a frenzy. My time in Geneva would most likely be short so I wanted to hit the pavement as soon as possible.

I walked around the city center in a summer dress and sandals. Within a few minutes, clouds rolled in and it began to sprinkle. I snapped a picture to send to Moritz with a message, “Of course there’s bad weather the second I get here!” I ducked under a doorway to avoid the sprinkle and met a toothless old Portuguese man. Seems as though the people here are quite friendly as well! After two minutes of uncomprehensible chatter, I carried on my way.

Within ten steps, hail the size of marbles began to pelt me from the sky. Some as big as golf balls came down and began shattering car mirrors and cracking windows.

I ducked under another doorway and crouched with my backpack over my head. Thankfully, my iPad was inside of it and acted as a deflecting surface. Still, the hail crushed my fingers and ricocheted off of the ground onto my legs.

I remembered as a kid how people said never to throw pennies off of the Empire State Building because it could hit someone in the temple and kill them… The hail was much bigger than pennies, and falling from a much higher distance.

This place is going to kill me!

I banged on the doors of the building but my pounding had no effect on whoever, if anyone, was inside. My fingers bled and my toes were turning blue from all of the hail hitting them.

A brunette middle aged man driving a food delivery truck waved me into his truck. I ran in and slammed the door.

I began to thank him and noticed a face of confusion.

He only speaks French and Portuguese, and I only speak Spanish and English. We laughed and spoke in a mix of Spanguese. He was friendly, and I accompanied him on his delivery order before he dropped me off at an enclosed metro station.

This wasn’t the first time I had to be rescued by a food truck driver… but hopefully it will be my last!