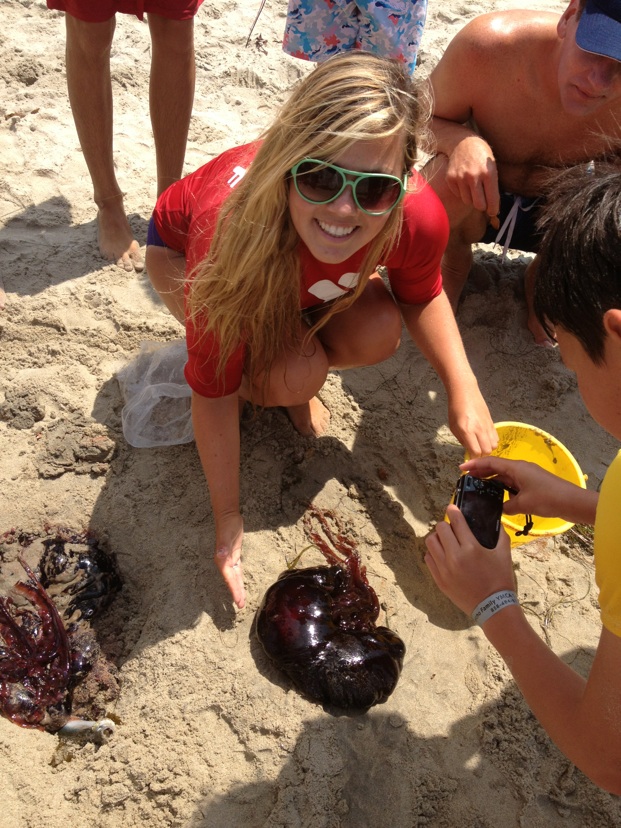 I shall call you squishy, and squishy shall be mine.

This past week was my last week of summer camp — and since I will be in Europe next summer, my last week with a lot of my favorite campers for at least a year. Cue the tears. I’ve grown extremely attached to some of the campers because I’ve had a few of them them almost every week throughout the summer for the past three years. Enjoy the final version of Funny Summer Camp Stories.

“Okay, when the counselors go in… you guys can go in.” My little shredder shoobies sprinted down the shoreline with excited looks on their faces, panting as they lugged the surfboards after them… sometimes dragging them by the leash. They ran into the water and paddled their little bodies into the whitewash.

After a few shrieks, I looked over and saw a few of them clutched their boards like Jack on his log while the Titanic was sinking. They began to drift further and further into the deep water with their eyes wide and panicked.

There were jellyfish everywhere. Dark red in color and about 6 inches to a foot wide in diameter. Some of the tentacles were over a foot long as well!

A few of the braver kids got zapped, and said the stings weren’t too bad — mostly itchy. Thankfully, this put some of the wimpier children at ease. The counselors were stung a bit (including me) and we began to seek revenge on the jellyfish.

At first my friend and fellow counselor and I wrangled the jellies to keep the children a little safer — then it turned into plain entertainment. We built a mass grave to bury the jellyfish in, and some tourists looked at me like I was some sadist, allowing my children to go into the jellyfish fields.

The children who didn’t surf decided to make a hole in the sand called “Sandcrab Sanctuary.” For about three hours, the children divided themselves into diggers, builders, and runners. The diggers dug the hole, the builders built the moat, and the runners scooped up the sandcrabs from the shoreline and dumped them into the Sandcrab Sanctuary.

What the children didn’t realize was that they had built the “Sanctuary” on dry sand… about 20 feet from the waterline. The crabs started dying almost immediately.

The children began to send more and more runners to bring back buckets of water to dump into the sanctuary, hoping to cool off the crabs that were basically cooked alive in the heat and dryness. Every time a bucket of water was dumped into the hole, literally hundreds of sandcrabs would appear and start swimming around, swooshing around and around the hole in a sandcrab fury — you could barely see any water, it was simply a wall of sandcrabs!

I told them that in order for the crabs to survive, they’d need need to transport the crabs back to their original homes. The children took on jobs — runners and rescuers. The runners would get the water to sustain the still alive crabs, the rescuers would scoop them back up and transport them to the shoreline. They hustled as fast as they could, but many sandcrabs did not survive.

As one child put it, “Sandcrab Paradise had turned into Sandcrab Genocide.”

If you are familiar with my camp and posts, you would know that every day I have a talk with my campers at lunch time that revolves around a certain topic. One of the days I decided to talk about the internet and figure out what my children tend to do on it.

“Yeah. I filled out the survey on a dating website and it popped up with four matches! The matches were older than my mom though… Then there was this advertisement with a girl that said ‘This girl wants to be your girlfriend’ and I clicked it. I’m never. clicking. that. again!!!”

One of the perks of my blog is that with WordPress, you can see what people click on. One morning I was monitoring my stats, and I noticed that someone was clicking on every picture of me (to enlarge it). I didn’t think anything of it…

…until one of my campers came to camp with every single picture of me that he could find printed out. And he was passing them around his friend circle.

Well, I included pictures of other counselors in my Vegas post.

In our surf camp, we usually have a certain number of surfboards. One day, much to my surprise, we had acquired an extra one that didn’t match any of the others.

Confused, I remembered that there was a man tanning next to our summer camp with a surfboard around the same size and color as the camp’s. My campers had accidentally stolen it!

Hands down, this was my favorite week of the entire summer. This camp consisted of about 34 boys and 6 girls — all my favorite age group, and all of my favorite campers.

I guess you could say I get a little competitive, and this week definitely brought out this aspect of myself in a sometimes ugly manner. It didn’t help that the other male counselor was also, equally competitive.

Every morning we’d go to the beach and play a friendly game of dodgeball. The boys LOVED it and were pwning each other like n00bs left and right. Eventually, we had to make two rules

BUT if you purposely try to get hit there, you’re out.

Every few seconds kids would yell, “HEY!!! NO BALLS TO BALLS!!!” and keel over in pain.

A few moments got a little too competitive, even for me. Especially when the male counselor hit another child in the private region so hard, the child curled up in a fetal position and cried. Another child chipped a tooth, and there was also the moment where all of my children began chanting, “WE WANT BLOOD! WE WANT BLOOD!!!”

A few of the… ahem, less athletic… children were used as distractions/sacrifices. They’d run, crawl, cartwheel, or dance across the field yelling “DISTRACTIOOOOON!” Inevitably, these unfortunate children were always the first ones pegged.

During the second half of the day, we’d play laser tag at Ultrazone.

I now know with conviction that kids play too many violent video games.

The campers separated into three teams, Riptide’s Crew, Bubble Ninjas, and MIBs. The three best players all started off on Riptide’s Crew but were separated because that team happened to beat the other teams by over 10x the points. The Ultrazone lady announced the winners and the top three boys went, “awww mannnn!” and slumped down into their seats. The lady looked confused until I told her that being too good meant they had to be separated.

We went into the arena, guns and vests ready. I took shelter in a bunker and sniped the little pipsqueaks down below.

Then I heard a “help! helllp!”

Five members of the Bubble Ninjas had cornered a small and frail MIB and circled around the MIB Russian Roulette style. When you get shot, your lights on your vest go off for five seconds — you’re disarmed during that time. The MIB had his arms spread against the wall and I never saw his lights turn on.

I heard one of the Bubble Ninjas say, “keep ’em up Mother Trucker if you don’t wanna get pistol whipped.” The Bubble Ninja had his gun cocked sideways like a gangster.

I bolted down to save the MIB and the Bubble Ninjas tried to corner me as well. The MIB looked to me with gratitude and escaped behind me… but not without shooting one of the Bubble Ninjas before he disappeared into the darkness. I saw the MIB raise his small arm and fist bump in the air as he ran away.

After this game, I implemented a no-acting-like-a-gangster rule.

I also made top 10 in the rankings.

At lunch time most of the children would relax on plastic chairs and eat their grub. However, a few of the campers spent their time attempting to disgust me to a lost appetite.

One of my campers was eating a neon green Jell-o cup. He said, “Look!” and swallowed his Jell-o in one loud slurp.

Then he regurgitated it back into the cup.

And swallowed it again.

He repeated this process a few times, with each time the Jell-o becoming less and less transparent. It started to turn a murky puce green and had little pepperoni chunks suspended within the Jell-o (he had had a hot pocket during snack time).

I started to feel queasy and told him to stop… He raised his arms in protest, holding the Jell-o cup full of the remnants of his regurgitation show. He brought his arms down, and flung the Jell-o all over an innocent camper trying to relax and enjoy his meal.

Everyone’s faces dropped… the innocent camper sniffed the Jell-o substance splattered all over his legs and asked, “WHAT IS THIS?!”

I cringed at my schedule assignment — Archery camp.

Archery children are known for being especially violent and I only recognized a few names on the roster. Oh, great.

Monday comes and I am pleasantly surprised. All of my children seem to be perfect little angels — almost to a creepy extent.

Much to my surprise, the four who fled came back carrying ice packs from their lunches to give to the injured child.

By Thursday, I was completely at ease thanks to my nonviolent children.

Which is precisely the state one evil camper wanted me to be in.

We have a rule where if you take your arrow out of the quiver before it’s time to shoot, the arrow gets taken away.

One child was running around with his arrow held high above his head in a clasped fist while yelling, “JAVELIN!” The other children came running to me to tattle. I asked javelin boy to please give me his arrow and that he would probably get it back later.

The boy picked up his arrow (yes, like a javelin) and threw it straight at my chest. It actually hurt a bit!

The next day, javelin boy came back but we made sure to keep our distance. He was behaving and even told me “good job” for shooting the Zombie that we had pinned to the target right in the eye!

A mother who spoke no English came up while we were playing and signaled to her car where her baby was locked inside, windows rolled up. I called the fire department to come unlock the baby from the car.

…until the firetruck came with the signals blaring.

Apparently the children (who had witnessed the incident the day before) thought that javelin boy had shot me and that I was being taken away!

Some other notable moments:

A six year old from another camp showed me his fortune teller. Pick a number, any number! I was pleasantly surprised when I was shown number one.

One boy in my camp had a British accent — the other campers thought this was cool and attempted to mimic him. “Ahhr ya gewin tew gah gah pahk?”

“What?” I’d respond, “suck your tongue in your mouth when you talk, I can’t understand you.”

Their British accents sounded like they had all become tongue amputees.

One child then retorted, “well I want to do everything I can to honor London — that’s why I rooted for the British in the Olympics. We need some way to pay the English for giving us Dr. Who!”