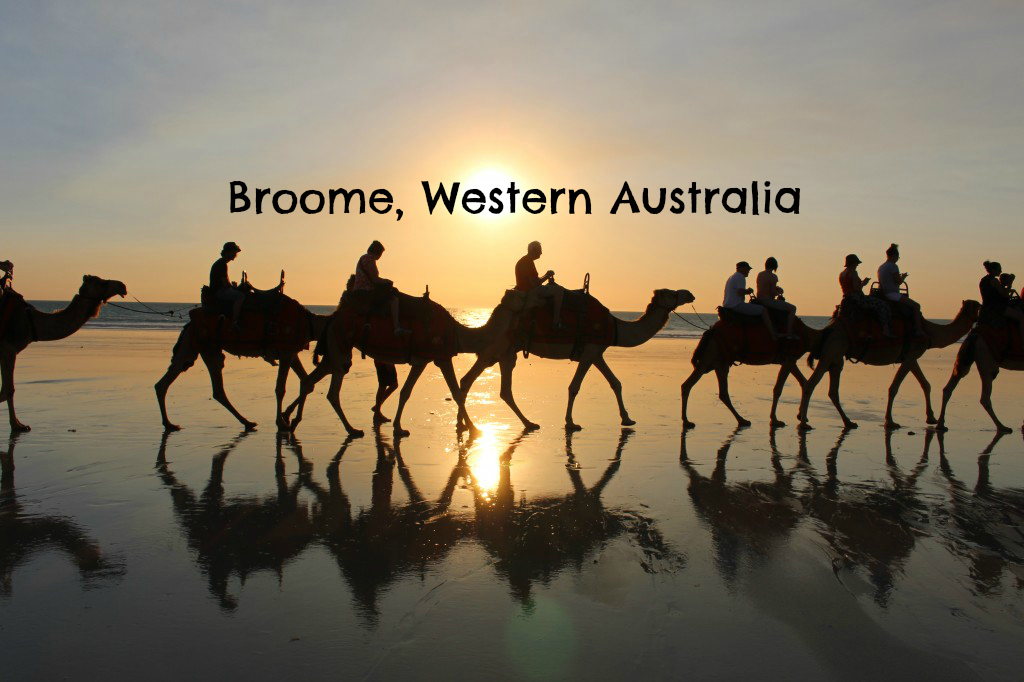 Staircase to the Moon in Broome, Western Australia

It’s been one whirlwind of a month, where  I traveled Australia from top to bottom… all while staying in the same lonesome state of Western Australia. While I haven’t ventured into the big island’s shinier, more well-known locations, I’m starting to really get attached to this great chunk of unpopulated land. Of course, seeing one of nature’s most amazing phenomenons in Broome has taken my relationship from being causally involved with WA into it’s Facebook official territory. Broome hosts the third largest tide change in the world, with a whopping ten meter difference between low and high tide. This tide change combined with the timing of the full moon creates a spectacle that happens only a few times a year.

Right around dusk, Moritz, Birgit, and I found a small patch to cozy up on one of Broome’s peninsulas. A small group of spectators followed, setting up their blankets and adjusting their tripods to capture the perfect picture. With each minute ticking by on the clock, the air became steadily more silent, with everyone bracing for what we’ve all been waiting for.

At precisely 7:07, a hush fell over the crowd crouched between rocks. It was time for the moon to make it’s big debut.

Slowly, the moon rose over the ocean’s horizon and presented an illusion of stairs linking our homely mortal beings to somewhere more grandeur. We were all so moved by the experience that we barely flinched when a deadly Australian brown snake slithered across a young woman’s towel and made its way into our area. I even stuck my leg in a dark crevice between two rocks to get into a better vantage position. If that isn’t proof of something being captivating, then I don’t know what is. Birgit has a knack for travel planning that unfortunately isn’t contagious. When she’s involved, there’s less scramble (re: every trip Moritz and I have taken together) and more smooth sailing. As a former Lufthansa flight attendant and globetrotting genie, she timed our flight to land perfectly in time to explore the Full Moon Market before watching the staircase to the moon take full effect. For such a small town, Broome packs a ton of personality. With street performers, quirky market sellers, camel riders, pearl farmers, and beer brewers making up a majority Broome’s occupation list, you get the feeling that every Broome citizen possesses a unique life story. We caught wind of some 130 million-year-old dinosaur footprints that were preserved on the ocean’s shore at Gantheaume Point and set off to find them. Of course, true to Western Australian form, there is no plaque, guide, or general advice on where to find the dinosaur footprints. We had to search for them ourselves like treasure hunters during low tide. I’d occasionally point to a round hole in the rock and say, “this could be a footprint! ….Right? Like, a horse type dinosaur?” Birgit and Moritz would flip back and forth between deciding if my dented rock was legitimate or not.

Eventually, we found just two of the footprints preserved stealthily on the rock. In what parts of the world can you find something so ancient and still feel like you’re one of the first people to lay eyes on it? This coastline hosts thousands of dinosaur footprints, with some being over 1.5 meters long! Aboriginal dreamtime stories claim that the footprints are from Marrala, a Creation Spirit known as “Emu Man”, who walked the shores and created land as he went along. You can read more about the legend (which involves a juicy scandal!) and dinosaur facts here. After walking the walk of the dinosaurs, we scaled red rocks to watch the sunset. Of course, in a town toting just a few thousand people, there are some of those who participate in dragon boat racing. On the same beach on the same day, you can watch a boat race, buy some good eats at the Full Moon Market, and then watch the moon rise. There has to be something in the water here, don’t you think? I mean, besides the 30 people who were tossed into it during the competition. We kicked back and placed bets on the teams scramble for the glory. On our final day, we boarded a yacht and went whale watching. Western Australia, while sparse in people is abundant in wild animals. After an hour of lounging on a boat, we spotted a young female humpback whale traveling south with her calf. They performed a bit of a monkey-see-monkey-do show with fin slaps. First, the mother would produce a hearty splash with the slap of her fin. Then, you’d see a tiny fin pop up and follow suit. A for effort, little one. You’ll get there someday.

The only thing cuter than seeing the calf’s small fin was hearing it communicate underwater. Our guide threw a waterproof microphone into the ocean and we could hear the whales whine and moan. Baby whales sound about as cute as you imagine they would. These whales embark on one hell of a 16,000 mile round-trip journey every year, feeding on abundant krill in Antarctica and then traveling to warmer, more romantic waters, to mate and give birth to blubber-less calves. For this entire journey, the whales live off of fat reserves and go months without eating – even the mothers, who are feed about 130 gallons of milk to nursing calves per day.

When the whales were playing hide-and-seek, we witnessed a few sea snakes sliding along the surface, sea turtles popping their heads up for a breath, and even an albino tiger shark made an appearance – with one of the crew members dubbing him the nautical Michael Jackson. I know I gush about Western Australia to a point where it seems like I’m cult member preparing for a still-beating kangaroo heart eating ceremony, but this place really does make you feel like the world is a playground. And if I started talking about the sunsets, then you’d really think I’ve been brainwashed. So I’ll leave you with these pictures instead. Pssst. Before I go, I’m a finalist for a blogging competition put on by an Australian health insurance company and have a chance to win some money! I’d love it with the passion of a thousand burning suns if you could please click here and vote for me under the travel section!