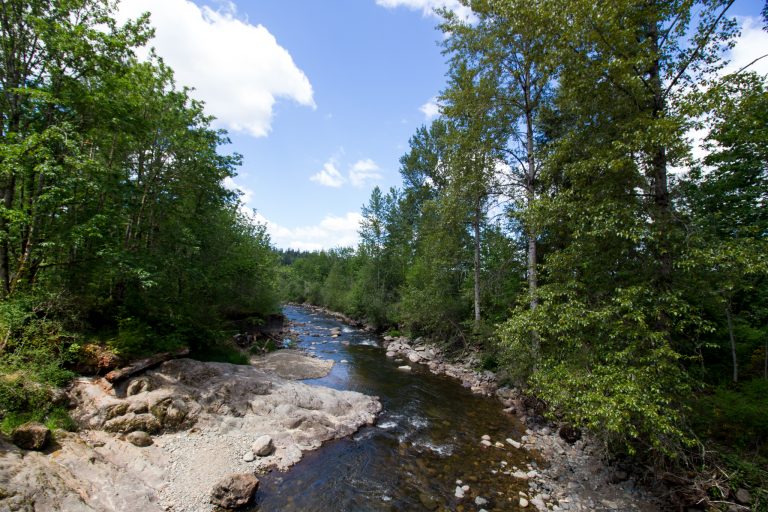 I first heard a loud scream, followed by a bang behind Majestic Mobile Homes, a run-down trailer park taken over by squatters.

“Raccoons?” I asked a local girl as we stood around a late-night bonfire.

“Oh you thought it was an animal? That’s cute. My first instinct was a bum fight. We got a lot of tweakers.”

The girl ashed her cigarette. Welcome to Spanaway, Washington in Pierce County. The region is notorious for being the backdrop of many COPS episodes — a tout I’d heard more than once. Spanaway is a town where marijuana shops neighbor churches, women serve drive-thru coffee in lingerie, out-of-business VHS rental shops are on the main drag, the local high school mascot is a caricature of a Native American, and beer cans litter the side of the road. The local Wal-Mart sells American flag paraphernalia (made in China, of course) and you can buy fireworks at Ill Eagle Fireworks stand. All set to the backdrop of being close to Mt. Rainier, incredible wildlife, millions of trees, streams, and lakes.

“Don’t ever walk into Wal-Mart after midnight. It turns into a scary place.” The same girl told me. When I searched for Spanaway crime news, most anecdotes came from Wal-Mart employees.

Spanaway was the first stop that my dad and I hit on our road trip from Sacramento to Washington. We packed the back of a rented pick-up truck with furniture to deliver to my uncle in Washington and planned to hit a few national parks and the Highway 1 on our way back down.

My dad is an opinionated person.

Trapped together in a room, we’re sure to engage in our favorite family pastime: debating politics. On a car ride a few years ago, an argument got so heated that I wanted to jump out of the car, and I’m sure my dad would’ve left me for dead if I’d done so. Kidding. Kind of. So, obviously, when the idea of taking a trip from Sacramento to Washington came up, the thought of being stuck together for hours and hours made us both a little nervous. But our fears of bickering with each other were eclipsed by the uneasiness that comes with learning that the local Wal-Mart often sells out of gun ammunition by 9 a.m.

Just a few hours before our arrival in Spanaway, we’d passed many signs petitioning for the State of Jefferson, a movement of rural Californians and Oregonians petitioning for their own state — they feel unrepresented by the big city slickers who harbor a strange phobia of horses and dirt.

Once we crossed into Oregon, billboards for pot shops, fast food chains, and churches appeared as if on a algorithmic rotation. This exit for Jesus. Next exit for recreational cannabis.

On one sharp turn on the freeway, a mattress we’d been transporting to my uncle’s house flew out of the back of our truck. We panicked and turned around as soon as we could but couldn’t find the mattress anywhere. We consulted the local highway patrol, who told us he’d seen the mattress and that it’d been stolen just five minutes after we lost it.

“It happens a lot around here… Things don’t last long on the side of the road. People are always ready to pick them up.”

I clung to the thought that the mattress would be used by young children, who usually slept shivering on a yellowed linoleum floor.

We stayed with my uncle in Spanaway for three days who works as a pastor and runs an advocacy non-profit.  He’s not into judging anyone, so his house is a refuge for those with blemished pasts. I got the feeling that he likes living somewhere with more personality and grit than a track-housed suburb.

I forget how it came up, but there was a story about how a local man had been banished from his local church because of a criminal record. To which my uncle commented, “You can’t ban someone from a church. That’s like banning a sick person from a hospital.” … “The people struggling are the ones who often need it most.”

Being from California where marijuana smoking still requires a medical card (albeit a fake one will do), I had to ask, “Does everyone smoke weed? Or  just a few people?”

“Oh god yes. Everyone smokes weed here.” One girl replied, “Sometimes the traffic light will be green — the car in front of you will just stay there. When they finally drive off, it’s always at a slow speed.”

Just a few years post-pot legalization, weed has become an industry akin to craft beer. The nuances between sativa and indica are discussed with the passion you’d hear from San Diegans and their micro-brews. In a few more years, I expect the sensationalism will die off. Until then, the industry is sailing along and making a pretty profit.

My dad and I hiked for miles down one of the area’s many trails. Properties with rusty cars and metal scraps hid behind the trees. A small dog ran outside his owner’s lot and onto the trail.

“The trees hide the mess.” We noted. Mess  — or the only things that make this place interesting? On our roadtrip from Sacramento to Washington and back via the Oregon coastline, I never expected a blog post to bud from our few days Spanaway. For a chick who grew up in a surburban neighborhood of pearl clutchers, where the biggest scandal in my town was an incident involving underpants, this was certainly new for me. I’m not sure that I got a well-rounded view of Spanaway — as most residents I talked to disclosed that they’d love to leave someday — but it’s the only view I got.

What town stands out to you in an interesting way?