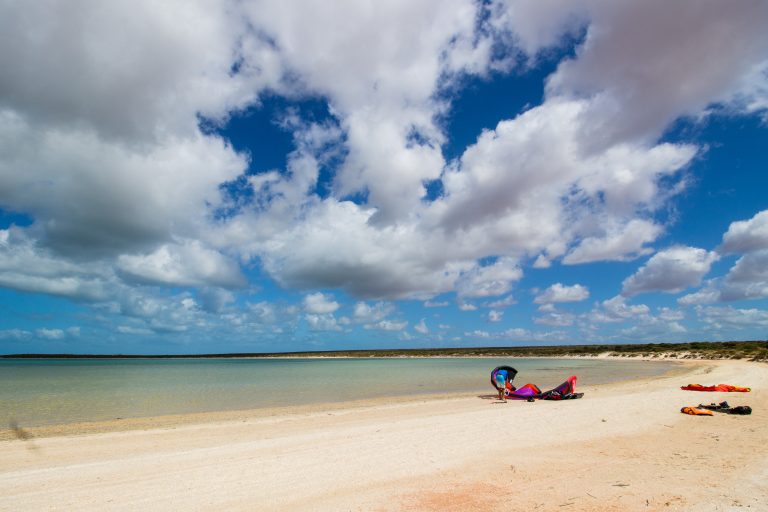 “They wanted to do a competitive swim across Shark Bay but the city reckons it’s too risky,” the pub owner explained and coyly flashed his teeth.

At the sound of this, I quickly reflected on the three ways that Australians name places.

In my three years of living here, my experience of the third category not living up to its name happened exactly once, at Penguin Island. So of course, the namesake of Shark Bay concerned me.

But maybe this time Shark Bay was a more abstract description? I squinted my eyes at a map of Shark Bay, and convinced myself that surely it was named after being vaguely shaped like a deformed shark. Picasso style.

It was a stretch, even with my overactive imagination.

The barkeeper continued, “The real reason Shark Bay is called Shark Bay? It’s filled with bloody sharks!” His raspy laugh echoed throughout the bar. My face instantly turned into the grimace emoji. Well, at least I heard this fun fact after I’d already been kitesurfing in the Shark Bay the entire day. Shark Bay in Denham is one of Australia’s UNESCO World Heritage sites, home to a whopping 1,000 humans and 10,000 dugongs. Twice as salty as the ocean, this bay is a nursery and sanctuary for juvenile sharks, turtles, stingrays, dolphins, and endless species of fish. They find refuge in the shallow water, while Finding Nemo’s “Fish are Friends, Not Food!” club members live in the deep center of the bay. After our stops at Lancelin and Coronation Beach, we finally made it up to stunning Shark Bay. Perfect conditions for a downwinder (where you start at one spot and kitesurf downwind to another), we started at Eagle Bluff and set off 20 kilometers downwind to The Thong Shack in Denham. The shelf of the bay was waist deep for hundreds of meters out. This meant that if you fell, you’d be able to stand and recoup no matter where you went. Stingrays, shovelnose sharks, and little sharks surrounded us. I shrieked every time I fell, praying that my body wouldn’t pin a stingray to the ground. I found watching my kite impossible, too mesmerized by the creatures and dark seagrass patches blurring beneath me. Every few seconds, a ray would glide under me, the edges its wings rippling like a thick ribbon in the wind. All types of rays with pointy wings, round wings, long bodies, or short tails swam alongside us. They fled from the large shadows of our kites overhead.

Being the only beginner on the tour, one of my tour-mates, an older wine-making Frenchman stayed near. He constantly cut me off, corralling me and herding me downwind. At first I was annoyed, irritated that he was getting in the way of my solo endeavor. It wasn’t until after the downwinder that I realized that he was doing it out of affection, like a kitesurfing sensei complete with a thick accent.

“You were going upwind! This is a downwinder!” He explained.

A group of fins rose to the surface above one of the dark patches a few feet away from me. I shrieked and drove my kite inland, willing myself not to fall. Despite the cool water, I felt a quick sweat break out over my skin. My heart raced underneath the thin layer of neoprene. Fortunately, it was only a pod of dolphins. Though I’m always so excited to see them, I make a mental note that if they can swim that fast and that shallow, so can other creatures.

Out to sea, the water changed from tan, to black, to dark blue. Dark red sand with no civilization in sight lined the shore. Completely isolated, skimming over the top of the water with sea life soaring underneath me, kitesurfing in Shark Bay was the epitome of my ideal adventure.

My legs ached and burned after an hour, not used to riding a board for such a long period of time. At the end of the two hours, when we reached our destination, a few others in the group kept kitesurfing. My legs were too exhausted to keep going. We repeated the downwinder the next day, and any insecurities and fear that accompanied me on the first ride vanished by the next morning, with the second ride being just as magical. One morning, we launched our kites at Little Lagoon, a small, salty, flatwater spot that is supposedly friendly for beginners. Unfortunately, the wind was not strong enough for me to easily stay upwind and I spent my time being dragged across the sharp shell bottom and staying away from what’s known as the “stonefish hotspot.” Hopefully there’s a windier next time. Within a few short days, my confidence in kitesurfing shot from zero to maybe-I-won’t-die-after-all. Though I always chase adrenaline-inducing adventures, I’m far from being fearless. What’s not shown on this blog (often) are all the times I’ve sat in the water on my surfboard or with a kiteboard crying crocodile tears in frustration or fear. So, kitesurfing nonstop for an entire week without a major fiasco is an accomplishment for this crybaby. Where to Camp in Shark Bay: There are two camping parks in Shark Bay. Shark Bay Caravan Park is located right on the beach and has stunning views. However, it is not protected by the wind. This means that cooking dinner, setting up camp, and even sleeping can be a challenge if you’re camping outside of a vehicle. Blue Dolphin Caravan Park is an alternative that has great amenities and is slightly more sheltered from the wind.
Things to do in Shark Bay: Since the water is so clear and flat, it’s great for swimming, snorkeling, scuba diving, and even wildlife spotting from Eagle Bluff. There are a variety of bushwalks, especially during wildflower season which is much cooler than the midst of summer.