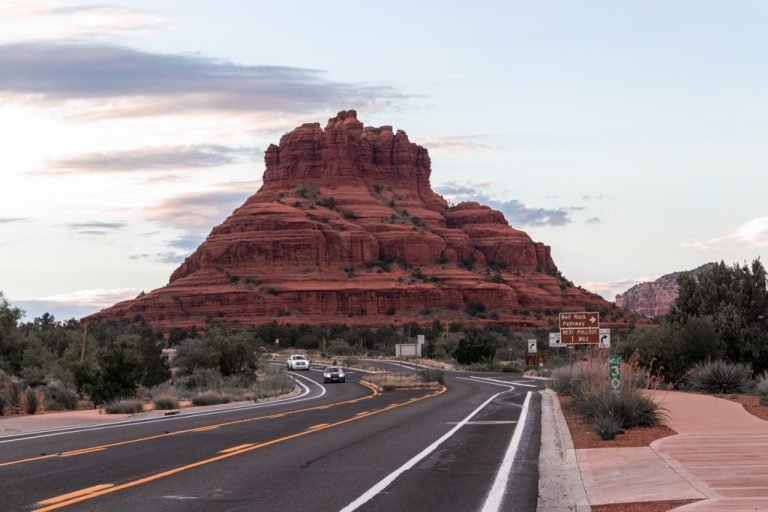 Are the Sedona Vortexes in Arizona Real or Total BS?

A city surrounded by yucca trees, cacti, and red sandstone mesas, Sedona’s could easily claim the title of being one of the most scenic destinations in the U.S. Supposedly, Sedona is in the heart of major energy vortex that swirls around the region–and there are multiple sites within Sedona where the vortex concentrates, like spiritual swirls of energy. Those seeking enlightenment flock to Sedona in search of spiritual healing and rejuvenation.

Sedona.net says, “You may feel a range of sensations from a slight tingling on exposed skin, to a vibration emanating from the ground when you encounter a vortex. Most often a vortex is felt by palpable sensation across the nape of the neck and the shoulder blades.”

Along with these vortexes come your gamut of new-age mystics, tarot card readers, and fortune tellers who’ve set up shop along Sedona’s main roads. Shops sell crystal balls and dream catchers alongside statues of Buddha and Hindu deities, like a bastardized mishmash of non-Christian religions. Buy a dashboard Ganesh, get a geode free! Most of these shops seemed to be owned and run by tie-dyed Caucasians, highlighting a stark absence of Native American influence. If Sedona were surrounded by an ethereal energy, wouldn’t the communities who’ve lived in the region for centuries know the most about it?

When we look at the origins of the Sedona vortexes–that is, when the vortexes first appeared on the New Age scene–research points to Page Bryant (1943-2017). Page was a prominent New Age mystic and former Sedona resident, who credited with establishing the popularity of the Sedona vortexes. She studied under Sun Bear, a self-proclaimed medicine man of Ojibwe descent. However, Sun Bear had no spiritual leadership standing within his own indigenous community and his $500 per person ‘spiritual retreats’ were frequently protested and denounced by the American Indian Movement, a grassroots organization that fought against racial injustice and inequality. Aside from Sun Bear, no Native Americans aided in leading these spiritual retreats. These protests were backed by the National Indian Youth Council. Under this lens, was Page Bryant the apprentice of a charlatan?

In an article published by CulturalSurvival.org, an organization dedicated to indigenous rights, the author states that some Native Americans believe Sun Bear “marketed his heritage to the highest bidder.”

The author writes, “Sun Bear also contended that criticism of his activities was ill-founded because he has arrived at a spiritual stew of several traditions—his medicine wheel was Shoshone and his herbal and other healing remedies accrued from numerous peoples, while many of his other ceremonies were Lakota in origin—and because he started his own “tribe,” of which he pronounced himself “medicine chief.” Of course, membership in this odd new entity, composed almost exclusively of Euroamericans, came with a hefty price tag attached.”

Pulling the thread of Sedona vortex history leads to tangled pile of capitalism and cultural appropriation. Today, it is predominantly white business owners who profit from vortex tourism. Tours where travelers can learn more about Native American history and culture are a separate entity to the vortexes entirely.

I only learned of this complex history of the Sedona vortexes after returning from my trip to Sedona. During my time there, I wanted to see for myself whether these vortexes were real.

On the drive from California to Arizona, I asked my friend whether she thought the vortexes could be nothing but a hoax.

“Of course,” she stated.

I thought so as well. But, I wanted to see what the hype was about. I was torn between keeping an open mind and writing off the spiritual vortex industry as just another way to separate tourists from their money. I dabble in meditation, but the “believe in magic for one day” item on my bucket list has yet to be ticked.

Despite our skepticism, we visited a few of the major Sedona vortexes to see for ourselves whether these spirals of energy really were the spiritual enhancers they claimed to be.

What is an Energy Vortex? The Sedona Vortexes Explained

While the plural of vortex is vortices, those in Sedona colloquially call theim vortexes. A physical vortex is when a gas or a liquid moves in a circular direction, swirling around a center line. For example, cyclones, water whirlpools, and tornadoes are all vortices.

Scientists have yet to find examples of physical vortexes in Sedona. However, most believers in Sedona claim that the vortexes are metaphysical. You feel them within you, and they cannot be explained with concrete science. Placing yourself in one of these vortexes supposedly allows the mind and body to rejuvenate, harmonize, and heal, like a spiritual palate cleanser.

Energy vortexes all around the world tend are found at both man-made and natural sites, yet all are outdoors. Sedona’s most spectacular rocks, the Egyptian Pyramids, and Mount Shasta are all thought to have a spiritual vortex around them. Some vortexes have masculine energy, while others emit a feminine one.

Is there an alternative explanation?

Could it be that being exposed to fresh air and a visually stimulating location bring these feelings of rejuvenation and clarity? Being outside is linked to increased clarity and concentration, a rise in happiness, and a boosted immune system, according to research from Harvard University. Combine this with meditation–a practice that thousands of studies have proven to reduce stress and improve concentration. Perhaps you don’t have to travel far to feel the benefits of an energy vortex. These vortex benefits could be found after spending time meditating at the nearest, beach, forest, or park.

Some state that the spiraling trunk of Sedona’s juniper trees are proof of the vortexes. However, these trees were more likely influenced by wind, and spiraled juniper trees are found outside of Sedona as well–in regions not known for energy vortexes.

While all of Sedona is found inside of a spiritual vortex, there are areas where the vortex can apparently be felt more intensely. Each vortex has its own energy.

Airport Mesa Vortex: This vortex is thought to be the most powerful vortex in Sedona, and is said to cleanse your chakras. Some visitors claim to see colorful orbs drifting in the air.

Cathedral Rock Vortex: Cathedral Rock is one of the best sunset spots in Sedona, and is well worth a hike to the top of the trail in between meditation sessions. This vortex is found at Red Rock Crossing, near the base of Cathedral Rock.

Bell Rock Vortex: The higher the hike, the stronger the energy (supposedly). This vortex spirals out from a bell-shaped butte that’s easily accessed from the main road.

Boynton Canyon Vortex: Boynton Canyon is thought to have not just one but two vortexes in the region. Follow the rock cairns and you’ll find the vortexes.

Read: The Best Things to do in Sedona, Arizona

Map of the Sedona Vortexes

My friend and I visited three energy vortexes around Sedona (Airport Mesa, Bell Rock, and Cathedral Rock). At each of these, I was awed by the beautiful landscape and felt a sense of peace. I wanted to experience the tingling sensation that so many others claimed.

However, my experiences inside these vortexes felt no different to the serene feelings I have whenever I take a moment to check in with my natural surroundings. I’ve felt connected to the world watching waves peel along the Margaret River coastline, swimming with humpack whales in Tonga, and looking down at a volcanic lake from the crater rim of Mount Rinjani. Even Devil’s Bridge in Sedona–not a known energy vortex–seemed just as magical.

Before hiking down from the Cathedral Rock lookout in Sedona, my friend said, “Let’s stop and take this in. It’ll be a scene we’ll look back and remember when we’re 80 years old.”

While I don’t believe the Sedona vortexes are the metaphysical spirals that many New Age mystics claim them to be, I do think that you’ll leave the region feeling rejuvenated. While most articles will tell you to enter the vortex with an open mind, I urge you to hang on to your sense of skepticism. Do you need to travel far to find a spiritual vortex, or can you sit calmly in nature and create one of your own?