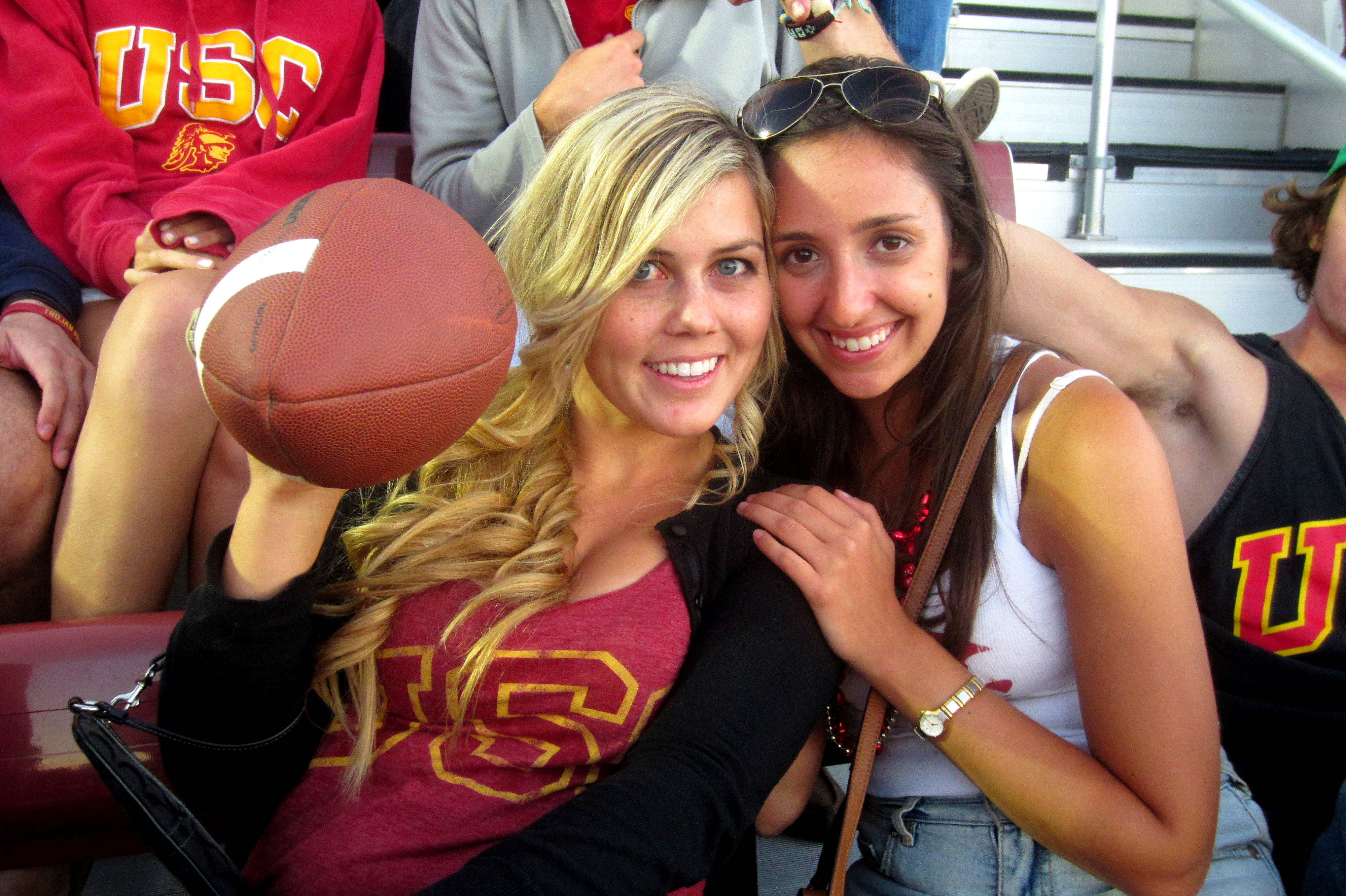 I’ll be the first to admit that I’m not the world’s biggest football fan. I go to the games solely for the socializing aspect. I stand when people stand, cheer when people cheer, rush the field when… oh wait, that’s never happened.

There’s been only one game that I’ve been extremely excited about — and that was the Ohio State vs. USC game of 2009. If you’re just tuning into USC football, we won the game with a minute and five seconds on the clock after all of the Ohio State fans had already stood up and started cheering, thinking they had won. Their jaws dropped in a stunned state and to this day it was one of the funniest things I’ve ever seen.

Anyways, I think there should be a new national sport that America cares about. I’d obviously like it to be something that’s more exciting and less violent than football… for instance, men’s water polo. This doesn’t go over well with any guys that I’ve proposed this suggestion to, but some of my friends will shrug and agree that blindfolded gymnastics could be a possibility.

Like the little bah bah sheep I am, I followed my fellow cult-like Trojan family up to San Francisco to see the game where we were expected to win by at least 10 points. Prior to Saturday, USC was ranked #2 and Stanford was ranked #21.

San Francisco here we are!

Thursday night we arrived at Brisbane Marina and slept on one of our friend’s yacht. We woke up to the smell of the sea and seagulls cawing over our heads — it was peaceful and since I have an affinity for the ocean, the perfect sleeping situation after riding in the car for six hours.

Sailing sailing over the open sea…

We got really into the captain’s salute

This time the sun was just in our eyes!

Friday, my friends explored Fisherman’s Wharf while I sat in two separate coffee shops perfecting my Teach for America application. After I clicked submit and did a happy dance that scared away all of the customers, we went on the BART to the Mission District and looked at some of the murals located in the alleys of the neighborhood. I wanted to stop by a Nicaraguan restaurant and bring back some of the memories of my Nicaragua Trip, but we ran out of time and went to catch the BART to Union Square. The BART is basically a subway system that works by using cards that are pre-loaded with money on them in a pay-as-you-go method. It is extremely convenient, cheap, and efficient in comparison to Los Angeles transportation.

Riding the BART in style

One of my favorite pieces in the Mission District

I absolutely adore street art — it’s one of my main interests and some rebellious part of me loves the concept of people using public space for an art canvas — especially if the space is typically used as an advertisement. I could literally talk forever about how much I think billboards, bus ads, all of the like should be replaced with something less stressful than constant bombardment of advertisements. I don’t have money! Stop trying to sell me things!

I spent the most time looking at this one — It was definitely my favorite with all of the political messages.

All of the Trojan invaders gathered in Union Square and played inspiring songs — ironically, we played “All We Do is Win.” An awkward memory seeing as… well, we didn’t really win, per se. Something tells me the band won’t be playing that song for a while.

After the cult rally, we went to explore the San Francisco nightlife over by the Marina. It was extremely cold, and the men were extremely clingy. Both this night and the night after, my best friend had a little tag-along who abandoned all of his friends just to talk to her. They were shut down after about an hour of whimpering along like little puppies begging for mama’s milk. The bars ended up being like the local USC bars, with the same faces and awkward “what sorority are you in?!!?” question bombardments. The pizza place was the most hopping spot after 2 a.m., where hordes of people tried to push the bouncer (who was bigger than any other bouncer at any of the bars) out of the way just to get a nibble at some burnt pizza.

Finally, GAME DAY arrived. My friends and I basically wandered vagabond style to any tailgate that was offering food. My best friend managed to snag two cupcakes, a hamburger, and chips while I hovered over the veggie platter like an emaciated vulture over a dead gazelle.

I also raided the fruit platter.

Tailgating at the Weekender really is a great bonding experience. Even though I don’t particularly have an interest in football, seeing my friends and meeting new people is something that rarely happens at this scale outside of college. Even the Stanforders were friendly to me for the most part!

We stumbled our way into the game and sat in the nosebleed section right next to a fellow Trojan sorority girl who had vomited everywhere. My best friend had managed to somehow sneak a cake (that she found) into the stadium and the scent concoction of upchuck and chocolate was… indescribable to say the least.

After the game, everyone was devastated except me. Sure, I cared a little but only because I was supposed to! I said, “well the real winner is the person who has the most fun!” Someone from the crowd told me to shut up and scowled out of the stadium early. I had fun, so in my mind, we still won.

I wanted to rush the field but my friends held me back.

We decided to explore downtown Palo Alto and I chose to wear a crown and claim it was my almost birthday/divorce/bachelorette party (again)/pregnancy/winning a reality show/whatever I felt like telling people at the time. It’s not because I think I’m a princess, but rather, I love obtaining alter-egos (like Mona from my Vegas post).  What I didn’t know, was that wearing a crown gives any creepy man the green-light to attempt a kiss. Oh, you’re 50 and here with your daughter? SURE I’ll kiss you. Not. My head hurt the next morning from bobbing it away from randos who thought breaking through my personal space bubble was a nice gesture. Thanks, but no thanks.

The highlight of the night was a group of musicians who played one of my favorite songs, Here Comes the Sun. They even shhhh-ed me when I started to sing along, a good move because I surely would have ruined it for everyone had I kept belting my screeching ballad.

Here comes the sun do do do dooo…

San Francisco will definitely be on my list as a possibility for a place to live and explore after college — the color, culture, and plethora of activities makes it ideal for a young adult. Also… there are chocolate shops everywhere and it is super easy to get free samples 🙂