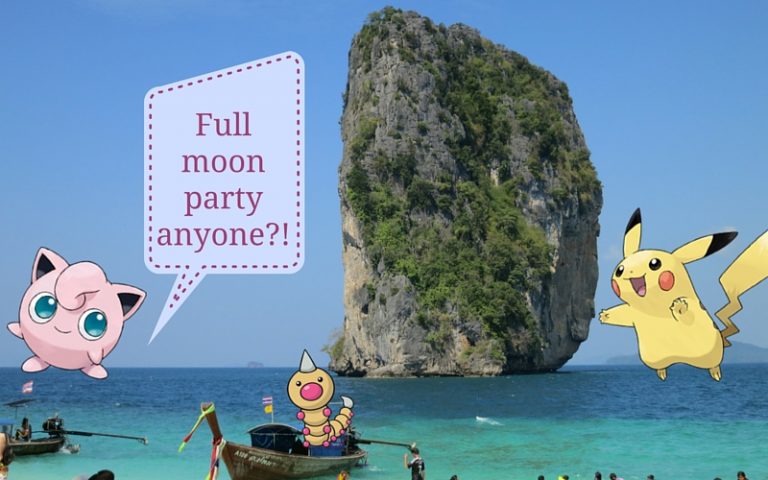 The Pokemon You Meet When You Travel

Here are the Pokemon you’re likely to meet while traveling, where to catch them, and how to lure them.

Weedle is the timid, scared backpacker who during the midst of an early-life crisis, booked the cheapest flight out of her hometown of Smalltown, USA. Though she’s been studying the safety section of her guidebook for the past few days, she has yet to work up the courage to ask where the bus station is in a foreign language. Weedle often flinches when she hears an accent, and her last diary entry says, “Today I learned that not all brown people are Mexicans.”

Where to catch Weedle: Find this Pokemon wiggling around on the hostel bathroom floor.
How to lure Weedle: Leave out a used copy of Eat, Pray, Love with inspirational quotes penned in the margins.

Oddish is the lovable travel mate you’ve been traveling with for three weeks, yet know nothing about. You just plucked Oddish from a previous destination, and this Pokemon has been with you ever since. Oddish never asks questions, and you’re often wondering if he has a family to go home to. Oddish likely had a very exciting previous life, but is now just trying “take things as they come.” Everything seems very simple on the surface, but sometimes you can catch a glimpse of strange quirks. Oddish has silly hobbies like calling into local embassies and making fake bomb threats, forging passports, and water color painting scenes from the nearby Redlight district into his Hello Kitty planner.

Where to catch Oddish: He’s simultaneously everywhere and nowhere.
How to lure Oddish: Act innocent, alone, and friendly – Oddish is sure to join.

Drowsee and Hypno are the new-age bohemian travelers you’ll inevitably run into in any city where marijuana is legal and psychedelics are easy to come by. They’re often found telling stories about doing peyote with the Native Americans, the time mushrooms changed their life in Amsterdam, and have a Peruvian Shaman on speed dial. They’ve never been to Indonesia, for they fear what would happen if a drug-sniffer dog got a hold of their backpacks – citing “too much residue.” If you hand over a few energies, they’re sure to hook you up with their nearest drug dealer, Psyduck.

Clefairy is your fun-loving Couchsurfing host or Airbnb owner, who will do anything and everything to ensure you have the best time ever! Clefairies often have two Pokemon of their own, and know how hard it is to be so far from home without a warm meal in your belly. Clefairy always leaves handwritten notes near the communal snacks and gives every newcomer a laminated card that says “Take me back to [Clefairy’s Address]” in the local language. Clefairy has a pair of hand-knit socks to wear, just in case your tootsies ever get too cold. If you’re homesick, Clefairy can ease the pain and remind you all of the reasons you travel to meet new people in the first place.

Where to catch Clefairy: Clefairy loves to be inside, making sure that you get home safely.
How to Lure Clefairy: Stand in the middle of the sidewalk with an open map, Clefairies never let a chance to help a stranger pass by.

Jigglypuff lives the luxury life, flying first class to all of the most fashionable destinations like Milan, Paris, and New York. She walks into one mall and out of another, never seeing the outside world for what it really is, because why would you need to? You could get dirty out there. You can follow her on Instagram, where she can be found using #SoBlessed and posting pictures dressed in local couture. The problem with Jigglypuff is, despite the lavishness, she’s so boring that her stories tend to put all of those who come in contact with her straight to sleep. How many times can we hear about your hair stylist, Jigglypuff? Nobody cares that you’re the only one on the continent with “Cotton Candy Pink.”

Where to catch Jigglypuff: Paris, Milan, New York. Or kidnap her Pokemon pet, Caterpie, that she carries around her in purse, she’ll come looking for it eventually.
How to lure Jigglypuff: A bedazzled credit card with frequent flyer points.

Doduo is the set of travel buddies who obviously hate each other, but refuse to go their separate ways. One duo is much smarter, attractive, and charismatic than the other duo, but the other would be too if that one didn’t always interrupt her, belittle her, and steal the limelight, gosh! They thought it was a really great idea to book a Contiki tour together, even though the resentment of one another existed long before the trip ever started. Nonetheless, don’t bother asking one of them to do something without the other because, “We’re best friends, we stick together. It’s what we do.”

Where to catch Doduo: On the middle of a Contiki bus tour. Find Duodo easily with the hashtag, #SoloTravel.
How to lure Doduo: Find a Latin, fit, male Doduo Pokemon of comprised of Brazilian twins.

Mankey is an expat from Southern California who moved to Bali with his surfboard collection and dreadlocked hair. Uncle Sam has yet to catch up with him for collecting unemployment for four consecutive years after leaving the country, but that’s cause the system is rigged, you know? Mankey often forgets that he sports sunburned skin and an American accent, and can be seen screaming at stupid tourists who don’t have respect for the locals, man. Mankey often drops in on the good-for-nothing tourists surfing the waves at Uluwatu, but has yet to give way to an Indonesian.

Where to catch Mankey: Mankey opened his own surf shop, “Black Mankey” where he sits flipping through the 2008 Bikini Issue of Tracks Magazine (his favorite), and pretends that he didn’t hear the door open.
How to lure Mankey: Just put out a Bintang and he’ll show up.

Zubat and Golbat are always up for a pub crawl, doing anything and everything possible to recruit others into joining what’s sure to be an all-night affair. Zubat knows that the best way to get to really know a city is through its bar scene, and never notices the eye-rolls that bartenders give whenever they fly in. Zubat tries to impress others by climbing and hanging off of the ceiling – a party trick that everyone has seen by now, and nobody is impressed with. After the bar, beware of Golbat, who has no concept of personal space and will aggressively attach himself to the first neck he can get his teeth on.

Pikachu is the best travel friend you’re likely to meet on the road. Pikachu is up for anything and often inspires you to go on adventures, picking up your spirits whenever you feel down. Pikachu often has a different nationality to you, and despite this, you’ll have more in common than you thought. You’ll spend days building memories, going on adventures, and will give a tearful goodbye once your itineraries lead you two apart. Whenever Pikachu comes up on Facebook, you’ll remember the good times of traveling the world and wish you could be together again.

Where to catch Pikachu: In your hostel, on a bus, or in a café
How to lure Pikachu: Look fun yet lonely and Pikachu will surely approach.

Gastly seems innocent enough, you met him at a roadside food stall on an extremely hot and humid day. He recommended the noodles with cream sauce, clam, and egg. You thought why not? It couldn’t have been sitting out that long, right? Gastly is the travel companion who stays around much longer than welcomed. His presence is often accompanied by stomach cramps and frequent trips to the bathroom. As soon as you board an airplane, he’ll evolves quickly into Haunter the second you climb over two sleeping passengers and into the window seat. You pray that Haunter will be the worst he can get, but he again evolves into Gengar in the middle of customs, just a few feet away from where you need to get your passport stamped.

Where to find Gastly: Hidden behind the “80% Off All Seafood Dishes” sign at the uncrowded local food stall. Often near Koffing and Weezing.
How to lure Gastly: Act as hungry and desperate as possible.

Ninetales is the adventure-junky who is always seeking the most extreme activities she can find. You’ve climbed Kilimanjaro with a guide? She’s stood on the summit of Mt. Everest three times, by herself. Skydiving just doesn’t do it for her anymore – so, she can’t wait until space travel becomes a thing. Ninetales is elusive and intriguing, dropping small details about just some of the many adventures she’s gone on. Don’t speak her native language? No worries, she’s likely to speak yours because she’s picked up a few words here and there on her first round-the-world trip… being fluent in Latin helps a lot. She’d invite you to join her for the day, but you’re probably too busy and don’t want to wake up early anyways, right?

Where to catch Ninetales: On the next shuttle mission to Mars. She knows a guy who has the hook-ups.
How to lure Ninetales: Put out a Groupon deal for heli-skiing in Alaska.

You rejected Diglett’s advances at the previous hostel, yet he never seems to go away. He takes pride in the fact that he’s “hacked Tinder” and has found a way to message unsolicited Diglett pictures to the women who already swiped no. Surely they’ll change their mind once they just get to know him. Diglett never knows why everyone stops talking as soon as he enters the room, and wonders why his foreign charm doesn’t appeal to females around the globe. Though he checks into the co-ed dorm of every hostel, he is perplexed that the other travelers request to be moved after the first night. He can currently say, “Damn girl, you’re looking good!” in six languages, but his goal is to learn it in at least twelve by the end of this month. He carries two books with him at all times: the local guidebook and The Game.

Where to catch Diglett: Trust me, you don’t want to find Diglett or you’ll catch more than just the Pokemon.
How to lure Diglett: He’s the only Pokemon who doesn’t need a lure.

Krabby is the scummy taxi driver who drives the long way around the city, with a broken GPS and conveniently, a broken meter. Krabby doesn’t care that he agreed on $10 for the ride at the beginning, things changed and now he’s demanding $70. Krabby loves to play the game where you hand him $50, and he claims you handed him a $5. Krabby knows that you have all of your valuables locked inside of his trunk, and Krabby will drive away if you don’t hand over the amount he demands. Krabby also has a friend Kingler, who can offer you a very cheap great deal hotel room just up the road. This Pokemon knows the hook-ups.

Where to catch Krabby: Any taxi stand. He’ll be aggressively waving and shouting over the other taxi drivers, making eye contact solely with you.
How to lure Krabby: Krabby always comes around as soon as you fall in love with a destination. Any requests for Pokemon (or traveler types) that you’d like to know how to catch? Which ones have you met?