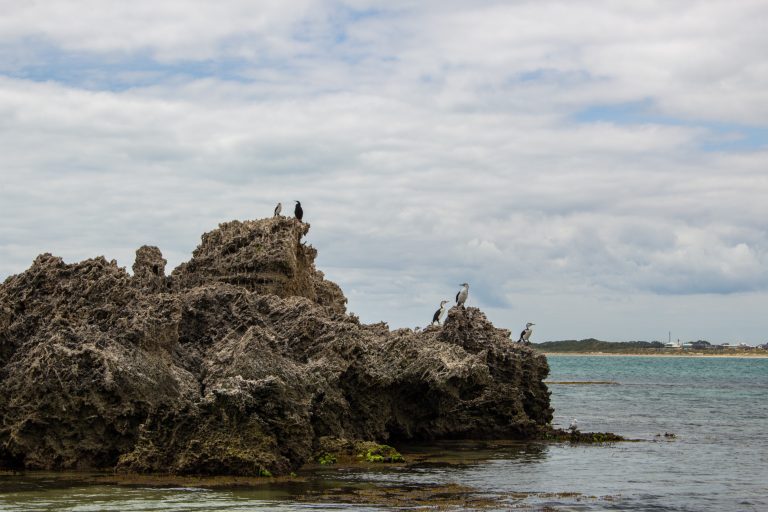 I glared at my friend. How could I have lived in Perth for two years and not known about an entire island filled with penguins? Not just ANY penguin – the world’s smallest penguin. The species is literally “little penguin.”  Or, more affectionately called in Australia, “fairy penguin.”

After the initial giddiness wore off, Moritz and our friends Adam and Raphael drove to Rockingham to see this magical land of little penguins. Western Australia has shown me cute animals in spades. Kangaroos, kangaroo mice, quokkas (aka the “World’s Happiest Animal“), emus… what’s a tiny penguin added to the long list of incredible creatures here.

Penguin Island is a bird sanctuary not just for penguins but all local species of birds. No food or trash is allowed on the island and it’s a mecca for biologists, birders, and people who love to see roosting birds in their natural habitat.

Like all great odysseys to mysterious places, this one involved a journey. To get to Penguin Island, we walked through waist-deep water on a sandbar for fifteen minutes. I slung my snorkel and fins over my shoulder, excited to finally make it to penguin haven. We splashed, laughed, and found a disturbingly large snail along the way that I chalked to being a good omen of things to come. We smelled the island before we stepped onto it.

A dark shadow cast over the island, created by flocks of seagulls swarming up above. The wooden walkway was covered in white sludge from the 24/7 carpet bombing put on by said seagulls. They squawked and cawed.

Alfred Hitchcock’s The Birds were tranquilized parakeets in comparison. I scanned the island for the promised penguins. There were none in sight.

“…Where’s… where’s the penguins?” I interrogated my friend.

In a moment of epiphany, I saw the island for what it really was. A prison for penguins who’d missed the turn for ice-capped Antarctica and landed in sun-scorched Australia instead. Upon their accidental arrival, the seagulls enforced a dictatorship where gulls would rule as the dominant species. I’d seen this place before in a documentary where seagulls pecked the eyes out of predatory snakes. David Attenborough’s voice rang in my ears, “The tiny penguin hides under a walkway where he’s less likely to have his wings plucked off…”

We found a single penguin shivering under a wooden walkway – possibly shaking from fear of being dismembered by the seagulls swarming overhead. Surely there’d be others huddled in a pack somewhere. Maybe this one was excommunicated, held hostage, or about to make a dash back to the motherland. We bid the little fella farewell and continued on our journey to find more penguins.

I wasn’t naïve. I’d seen Happy Feet, Madagascar, and who could ever forget the heartstrings-tugging journey of March of the Penguins. Penguins stick together in huge packs. That’s just how they roll. Any minute we’d stumble upon a herd – pack – flock, or whatever they call clusters of fairy penguins.

It was nesting season for the seagulls. The real-estate on the island was so crowded that they built egg filled nests everywhere. Some speckled eggs leaned against the wooden walkway. The gulls shot into the sky every time we came near, launching a full-frontal cawing attack. Because of the sheer volume of seagulls, it was as if the entire island did a stadium wave that followed us everywhere we went. I’ll admit that the chicks were cute, but this sentiment subsided once I realized that they’d too eventually grow into an unpleasant adult. Small wooden burrows with holes as doorways clustered into small colonies around the island for penguins to hide. Because the boxes had numbers on them, I imagined carrier pigeons taking letters back and forth between penguins too afraid to come outside due to PTSD. Finally, we went off of the pathway onto the sand – a respite from the angry birds.

We ran over to a grey ball of fluff resting on the shore. Slowly creeping towards it, we were afraid to startle the penguin chick. It was only when we were an arms distance away that we realized that the penguin chick had left this inferno of an island and flew – er – swam to bird heaven.

“Don’t touch it!” I yelled at our friend Adam. He crouched down and started petting the fluffy corpse.

We walked along north side of the side of the island’s cliff and played a few more tragic rounds of the “is it dead or just sleeping” game. The group stopped and assessed.

“Dead… no, wait, just injured and on the brink of death.”

At the north point of the island, we put on our masks and fins to explore the reef. Seaweed, sharp rocks, and schools of small brown fish accompanied us underwater. When we got back to shore, I saw a small penguin crouched under a rock and felt my heart soften. Away from the overprotective seagulls, I enjoyed the solitude of being alone with the flightless creature. I recognized the look of being far away from where you’re supposed to be.

Back on the walkway, we strolled through the eye of the storming seagulls, past a colony of pelicans. With beaks the length of a sword, I appreciated that the path didn’t go anywhere near the pelican colony. If seagulls were willing to peck out snake eyes for their young, imagine what pelicans would do! We never found the rest of the 1,200 penguins because apparently, they’re nocturnal. I’m not sure if I really believe that. I’d like to think that the penguins found somewhere safe to hide and are currently plotting a penguin revolution. Maybe the dead one was a traitor, and the two shaking ones we saw were spies. When I return someday, the penguins will have conquered the island and the seagulls will be the ones shaking under walkways and cowering in little boxes.

Yeah. Let’s go with that. I feel compelled to point out that every other person in the group loved Penguin Island and would visit again. I think this is because everyone besides me knows how to manage their expectations and keep an open mind. Moritz loves seagulls, and his family really enjoyed the island as well. The people who work on the island are passionate about conservation and rehabilitate any injured birds that they find.

So, while I joke that the penguins would be better off risking shark infested waters to go back to Antarctica, I don’t really mean it. Penguin Island truly is  a safe haven for all species of birds looking for an undisturbed place to live.

Perhaps if Australia named the island, “Angry Seagull and Occasional Penguin Island” or even “Bird Poop Island,” my expectations wouldn’t have been so shattered. Transportation: There are two ways to get to the island.
First, there’s a complete tour (with penguin feedings!) that The Department of Wildlife hosts. This includes a ferry ride to/from the island and a guide. Cost is $15-23/adult.
Second, you can walk across the sandbar that connects to Penguin Island like our group did. This is not recommended by WA government, especially for people unfamiliar with the ocean or are weak swimmers. Weather and ocean conditions can change instantly and a few people have drowned walking to the island in the past. If in doubt, take the ferry option.
To see the penguins, check under the walkways or rocky overhangs because they tend to stay protected in the shade while the sun is out.
Food: Pengo’s Café is a cute shop by the ferry entrance where you can buy snacks and coffee. No trash or food is allowed on Penguin Island itself.
Other essential info: The snorkeling is great on the north side of the island.
Type to search or hit ESC to close
See all results
We use cookies to ensure that we give you the best experience on our website. If you continue to use this site we will assume that you are happy with it.Ok