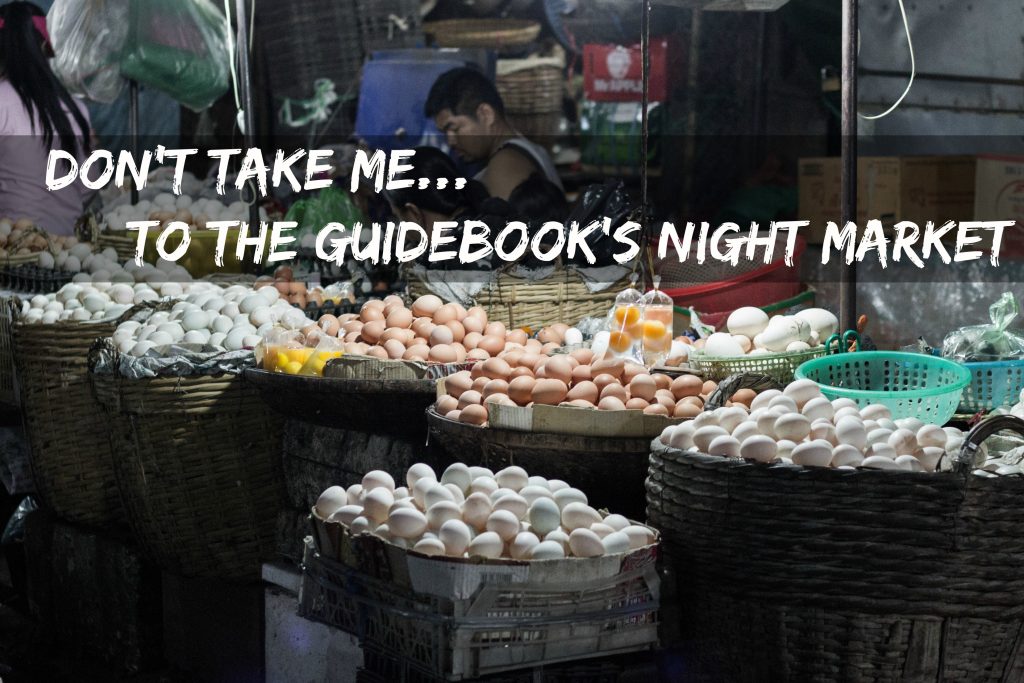 In bold English, the words “NIGHT MARKET” hang from one of Phnom Penh’s most visited attraction. It doesn’t matter that most Khmers cannot speak — let alone read — English because the sign is not for them. It’s for people like me. People who come from a world where pasteurization, gluten-free, and mandatory vaccines exist. People who cry when Cecil the Lion dies, and recant the horrible tragedy of it over a bacon-topped hamburger meal with friends (extra cheese please!). People who go to the bathroom in drinking water. People who don’t catch or kill their food, manage their waste, or have epidemics of illnesses caused by unsanitary living. People who flew to another country just for the experience of it.

People like me are lucky compared to most of the world.

Stalls of cute clothes, fancy milkshakes, fresh seafood – and even fresher noodles – line the perimeter of the marketplace. Despite there being endless arrays of elephant pants (pants you’d never see a local wear), I never saw another tourist in the market. I ordered a plate of cooked vegetables and sat down near a Khmer family on a bamboo mat, placing my shoes in a pile with the rest of everyone else’s. “How can someone say this is cheap? Maybe it’s cheap for you – not for people like us.” I overheard a Khmer woman tell a tourist earlier that day, when haggling over the price of a shirt. I swirled my US $1 vegetarian-friendly noodles around my chopsticks and wondered if I was being fair. Is it fair to think that Cambodia is so cheap, when most Cambodians are living in poverty? Cheap is relative. Cheap is an amount that’s only comparable to what is sitting in your bank account.  Guilt struck me as I remembered all of the times I told friends, “Sorry, can’t go out eat tonight… I’m too broke” before going home to a fridge full of food. I made my way back to my hostel just after the sun set behind the tall buildings lined with thousands of telephone wires. I learned quickly that the best way to cross the street is to just walk slowly and let the traffic weave around you. In fact, I’m convinced that running across would simply get you killed because you’ll catch a driver by surprise. Pedestrians strolling across the road are expected, runners are not. A foul smell kept creeping into my nose but I chalked it up to being just another scent of the city. Every few minutes, a nasty whiff catches you by surprise in Cambodia — something I’d noticed even as my plan descended into the country and got close to Earth.

Before I realized, I was at the entrance of another night market – one without a neon sign or stalls of elephant pants. Why didn’t my hostel tell me about this one? Where was this listed in the guide? It was obviously much bigger than the Night Market I’d just come from, so why wasn’t this one on my radar?

I wandered through the stalls and saw piles and piles of different colored eggs. I tread past the baked goods, wrapped treats, exotic fruits, cooked snails, and ripe vegetables. Then, the smell stopped me in my tracks. The whiff creeping into my nose here and there evolved into a full-on sensory attack.

This wasn’t a market for people used to little bottles of hand sanitizer, fifty choices of deodorant, and plastic-wrapped bloodless chicken glistening in the meat section of the grocery store.

This was a market for Cambodians. People who experience life in a raw, real, and unsterilized way. On both sides of the market, uncooked meat hung on hooks — covered in flies. Liquid dripped from them, and formed puddles under my rubber flip-flops – the bottom of my toes touched the juice. My eyes watered and I panicked that I would throw up. Live chickens clucked in small cages at the back of the stall, waiting to be grimly rotated to the front. Frantically, I searched for an empty bucket and an escape.

Meanwhile, men around me handled the meat with their bare hands, observing the texture and weight. Nobody else around me scrunched their noses and shooed the flies away by waving a plastic bag attached to the end of a wooden stick like a tiny flag.

I’ve been vegetarian since I was a child, refusing to eat meat even when the rest of my family did. I’d go on strike, forcing my mom to cave and cook me macaroni and cheese while everyone else around me ate steak. Eventually, I recruited my little sister into being vegetarian with me and we formed a powerful force together at family functions — fending off family members who pestered us about our choice. We feasted on side dishes of vegetables and mashed potatoes unabashedly, demanding second helpings if needed. I don’t judge omnivores and I’m not offended by meat – in fact, I often have to cook it at work – but like most people, vegetarian or not, I don’t like to think about where it comes from.

Ahead of me, the fish section began. Many of the fish were still alive, laying in shallow millimeters of water, flopping, writhing, and their mouths gaping for air. Heaping piles of fish surrounded me with the alive wriggling among the dead. Crabs scuttled up the walls of basket holding them, falling back before they could escape.

My stomach churned and I felt the dinner from the Lonely Planet featured Night Market rise into the top of my chest. Too scared to take another breath, I forced myself to stop and assess where the quickest exit would be.

Rain drizzled and seeped between the umbrellas, coating me in a wet layer of festering odor.

I caught a glimpse of motorbike lights and bee-lined it to what looked like a parking lot — stomping in puddles of fishy water along the way. I quickened the pace and took a huge breath of the smoggy air once I finally reached the exit of the market. The air felt fresh for the first time since I arrived. I felt duped and cursed the travel brochure my hostel handed me upon my arrival.

I was served the edited version of reality in everyday life. If left unchecked, clever marketing firms and tourism departments will dictate the people I meet, the food I eat, and the memories I make in Cambodia. There’s the Night Market in Phnom Penh, with 3.5 shiny stars on Tripadvisor, and there’s the night market in Phnom Penh that has yet to make an appearance on the popular travel sites. Guess which one is tourist approved? Ya-ya-sisterhood we’re-all-children-of-the-world hoopla aside, the blunt reality is that there’s a clear divide between myself and the still developing world. From this point forward, I’ll chuck the guidebooks aside and see Cambodia for what it really is – raw, unwrapped, and unguided by Top 10 Things to do In Cambodia lists. Thanks to where I was born, I may be firmly forever on one side of the line, but I’ll try damn hard to at least understand what’s happening on the other.

The market I stumbled into is called Phsar Kandal (Kandal Market) in Phnom Penh and is a traditional Asian wet market. While it was personally hard for me to cope with seeing animals suffer and experience the smell, I highly recommend going there for an authentic look into Cambodian life.