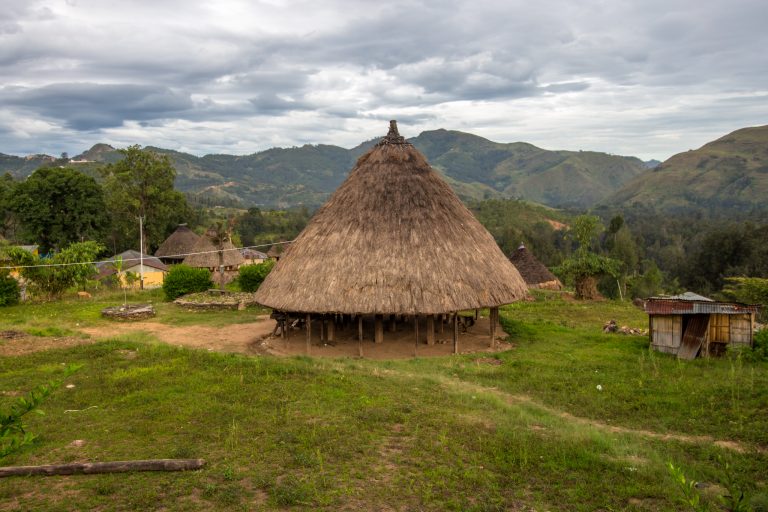 My friends and I sat on chairs lined up on one side of the living room at an elder’s house in Maubisse, East Timor.

“I call this drink sock juice. Because it tastes like sock juice,” a Peace Corp volunteer working in Maubisse, East Timor cautioned me and my friends.

Before the corp worker could answer, Maubisse’s town elder shoved a cup into one of my friend’s hands, and the cup made its way down the line like a hot potato. Each person who tried the juice gave an approving nod after taking a sip, but their sour facial expression betrayed them. 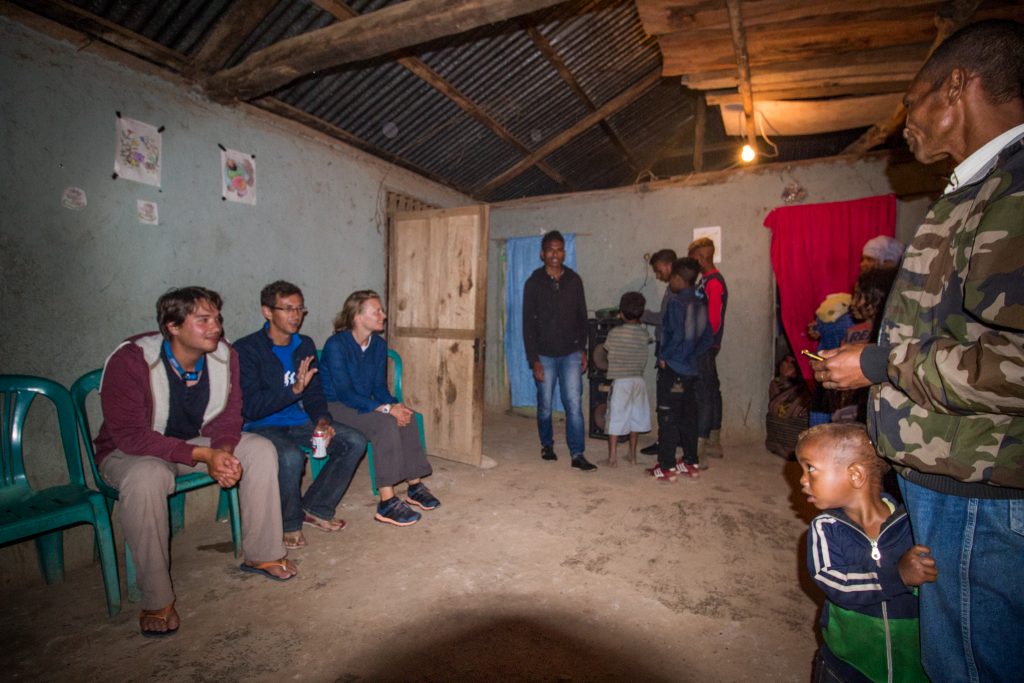 I took a quick swig. It really did taste like sock juice.

The drink is called tapai, a fermented rice liquor with a sour taste.

The Peace Corp member rambled, “That lady over there? She put a curse on me because she hates me.” An older woman sat in the corner, bundled up in colorful clothing and dog at her feet. I got a sense that he hadn’t spoken to outsiders in a few months, aside from his visiting girlfriend.

The locals spoke little English and our Tetun was nonexistent. Through hand gestures and smiles, we were offered small plates of meat and rice — always an awkward situation for a vegetarian like me. Fortunately, the PC worker was able to communicate that we’d just eaten dinner and I was relieved of sampling the meat.

After a few minutes, an elderly man came by and grabbed my hand and pulled me onto the makeshift dance floor, a dirt area in front of the house. My girl friend and I took turns dancing with nearly every man in the group – as well as most of the children. The male-to-female ratio was a bit skewed that night, and the women seemed much more shy to dance with my male friends. 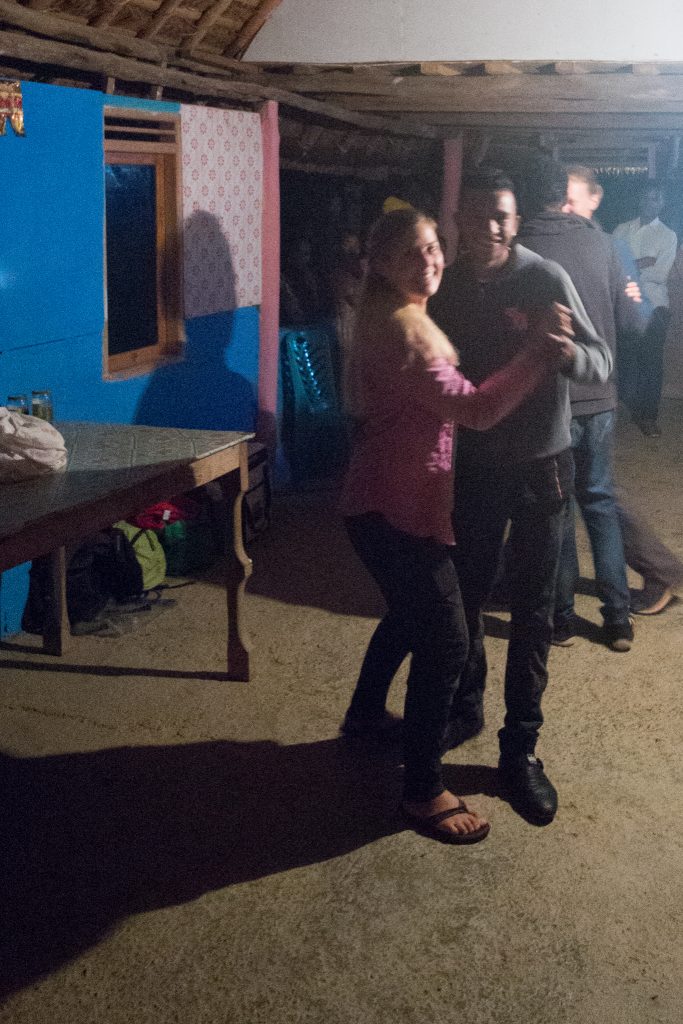 As it turns out, the cowboy cha-cha is universal. No need to speak the same language to groove in East Timor (though I use the word ‘groove’ loosely, the only dancing pair out of the entire crew both local and foreign were my two friends who put on quite the Lindy Hop performance).

The vibe felt like being back at a Mormon church dance again, complete with modest (malaria-proof) clothing and all. My East Timorese dance companions’ hands never ventured further than the middle of my back.

Maubisse, East Timor, is a small town that happened to be the final stop of our East Timor adventure.

A few days prior to this little town celebration, we hopped on our motorcycles and buzzed through the Timorese countryside. We stopped wherever we liked, and took pictures of the rice fields and sea views. Unlike the other motorcycle trip, we could now relax (my infected ankle showed signs of improvement) and enjoy the scenery without medical drama.

Though most of us got to Maubisse via motorcycle, two friends in the group tackled the steep Timorese hills and moody weather with a bicycle.

On the way, we stopped at Restaurante de Montanha, a restaurant and art gallery run by teenagers and young adult artists looking to practice and perfect their English.

The cyclists were speckled in mud from the many miles of dirt road we had to navigate to get into the mountains. Once we were up in the mountains, we saw the ocean and get a bird’s-eye-view of the towns below.

Near Maubisse, we stopped at a local market for fruits and vegetables to take with us to our homestay. People piled into the backs of trucks with their goods, like produce, eggs, and piglets wrapped in waved carrying bags. Many of the older people have red and black smiles from chewing betel nuts, a nut that according to the BBC, “It is used by almost a tenth of the world’s population. It gives people a buzz equivalent to six cups of coffee and is used variously as a symbol of love, marriage and a cure for indigestion and impotence.”

The red spit splatter marks on the ground could easily be mistaken for blood.

Our friend purchased a handful of avocados and the market woman thanked him with a red smile. 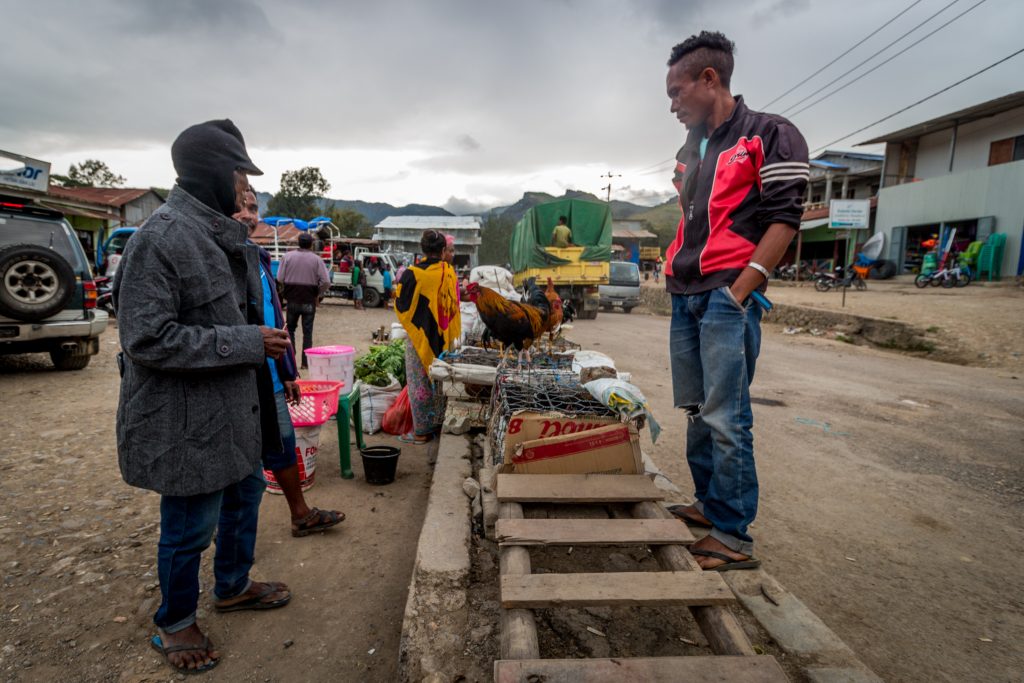 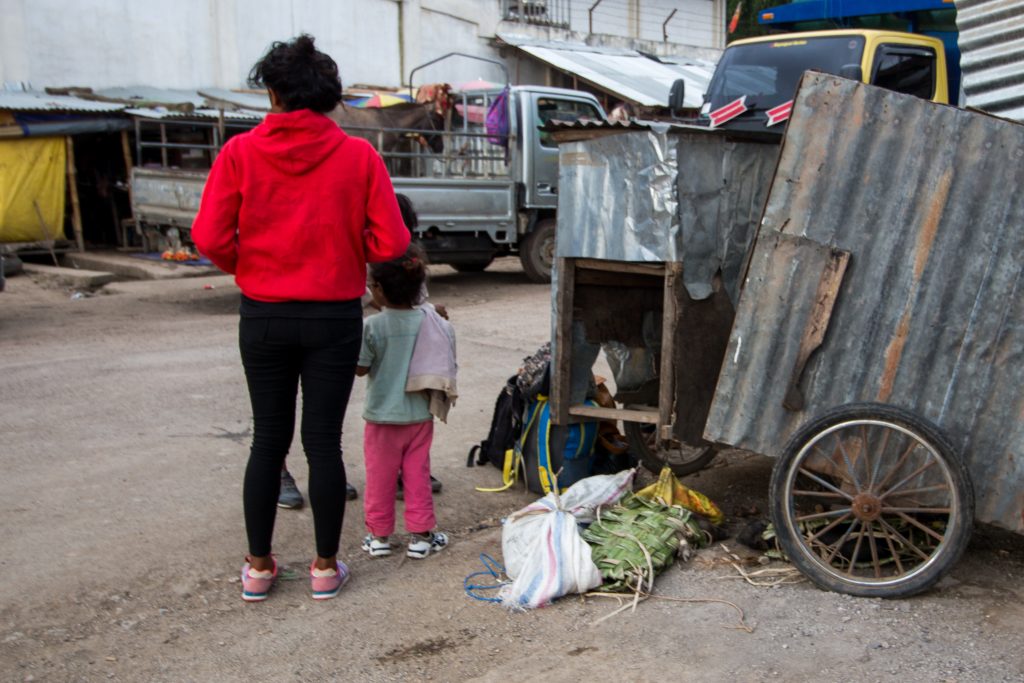 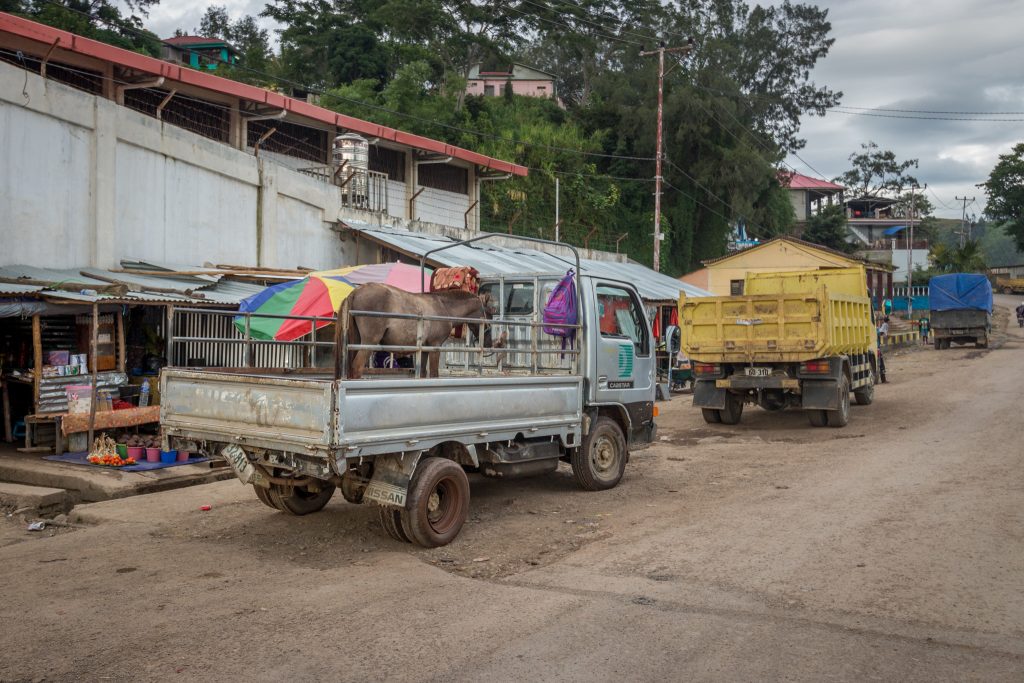 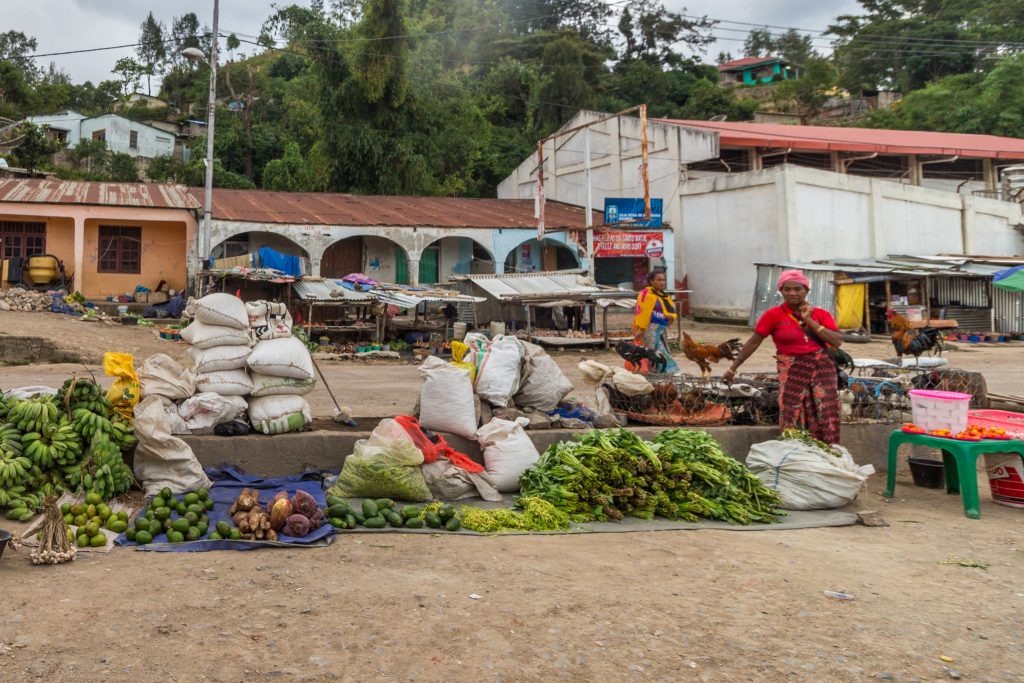 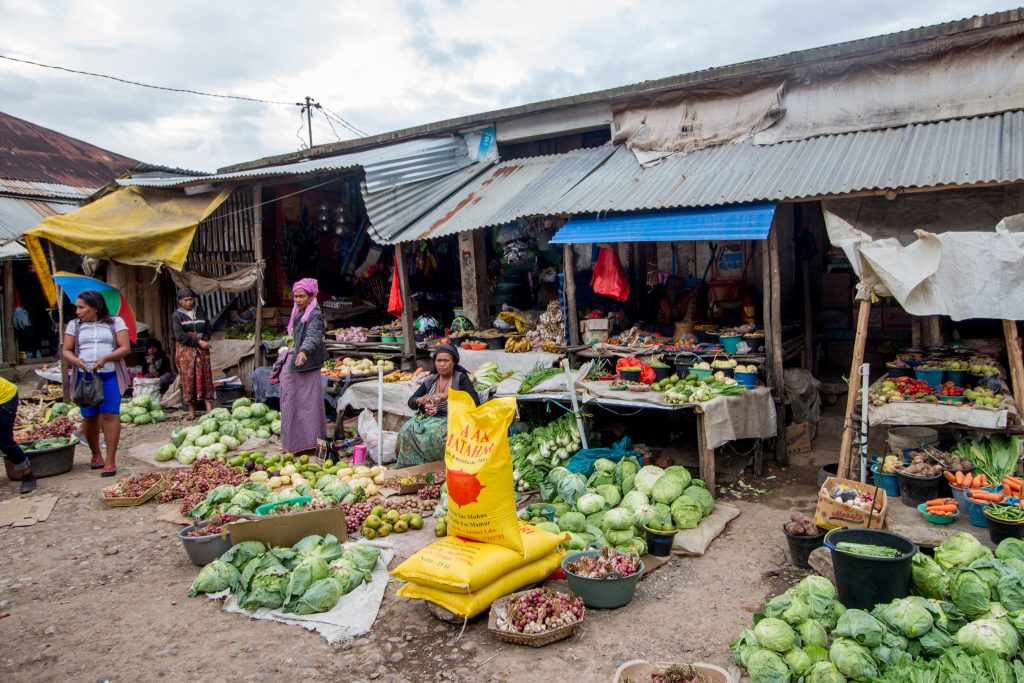 Finally, after a long ride, we made it to our homestay in Maubisse. I shared a thatched roof bungalow with two friends. Our beds had Disney princess sheets on them and a mosquito net draped from above. The view from our front door overlooked a soft, emerald-green landscape. 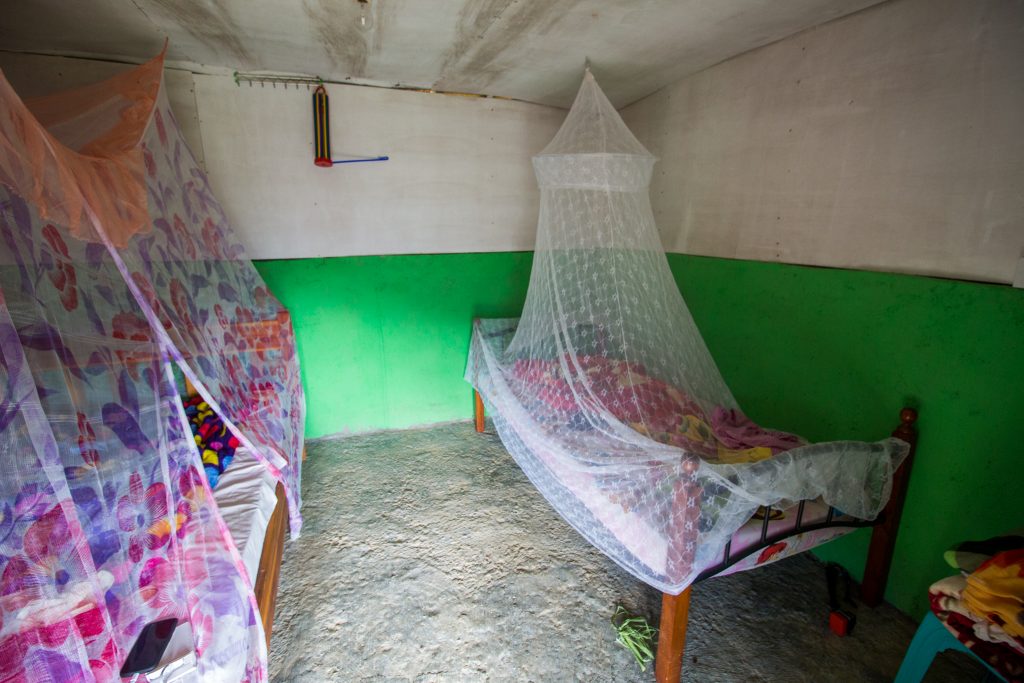 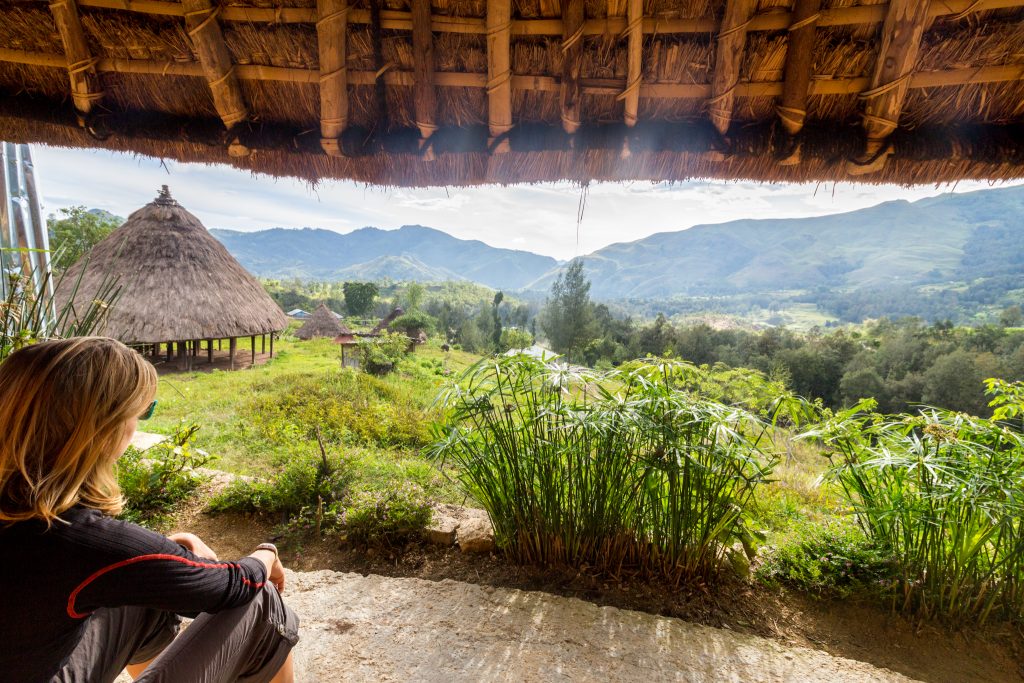 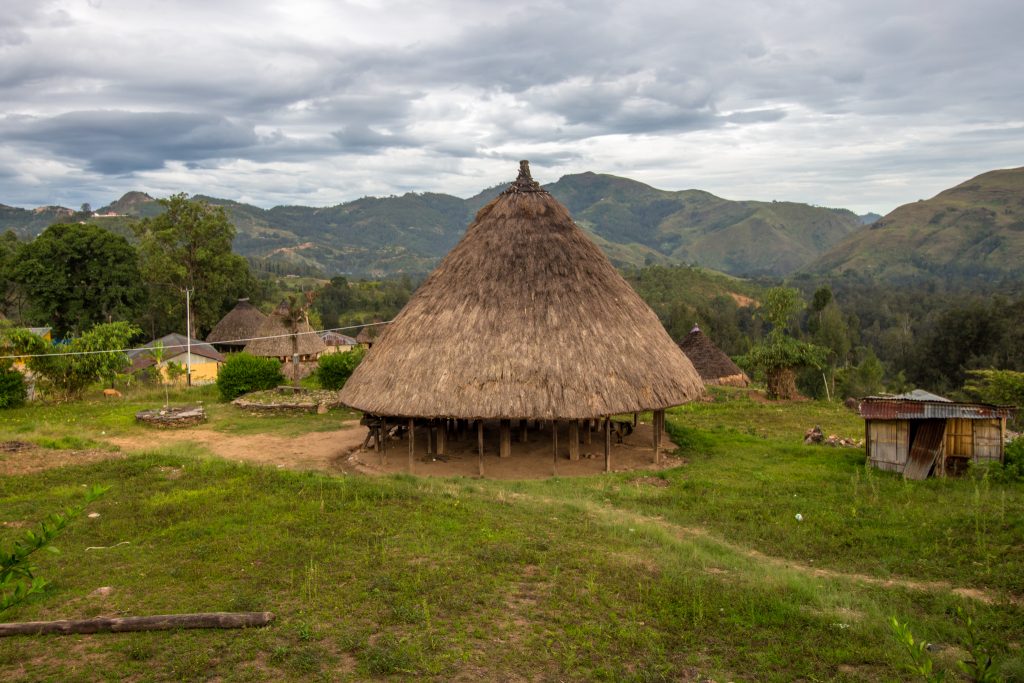 Maubisse is one of the best areas for hiking in East Timor, with tens of trails weaving through the hilly landscape to waterfalls, the tops of ridges, and through small towns. 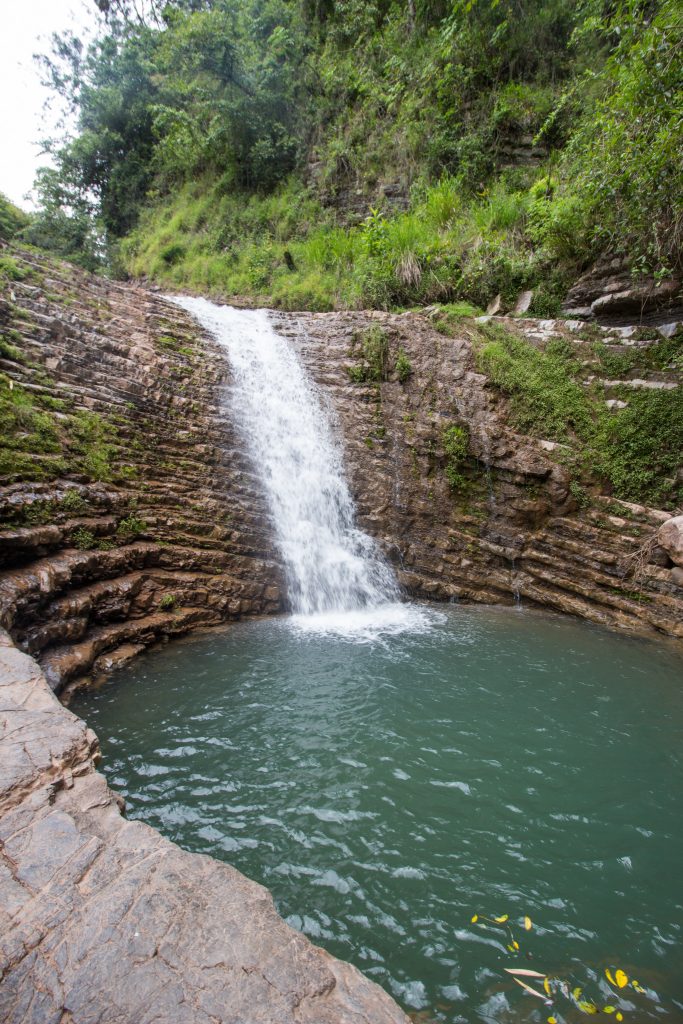 After a long ride, everyone was quite eager to explore the nearby sights. I wondered whether hiking with an infected ankle was a bad idea, or downright-terrible idea. I erred on the side of stupidity and started to hike with the group.

“Maybe two hours – twenty minutes to the waterfall,” A friend who lived in East Timor translated for us.

I decided to go to on the hike and turn back when I felt like I’d abused my ankle long enough.

A young man led us and was trailed by two younger siblings, who herded us from the back.

We wandered through the jungle until we made it to a waterfall that poured into a chilly pool.

Our guides leaped over and onto slick rocks with the grace of a Juliard ballerina wearing nothing but thin flip flops.

Meanwhile, we slid over moss-covered stones, stomped in mud puddles, and stumbled over exposed tree roots.

Common sense finally came around, and I asked one of the local men to point me back in the right direction to the homestay. The man sent two children to accompany me and lead the way. Again, they jumped over the slick mud with agility. My elephantesque ankle and I lugged behind.  Every few minutes, they’d make eye contact with one another, then with me.

I imagine that they were a bit disappointed to have to take the cripple back home rather than finish the entire hike with the rest of the crew.

A few more travelers showed up and were staying at the homestay with us.

That night, we partied in the main area food, dancing, singing, and laughing. We burnt out our phone data playing songs and videos from YouTube for the group including some hit classics like Gangnam Style, The Cupid Shuffle, and of course, Watch me Whip.

We partied until 2 a.m., dodging shots of tapai. When we, the foreigners, left the village elder’s house, their party was still going strong. I tucked into my Disney princess bed and smiled at the excitement of it all. 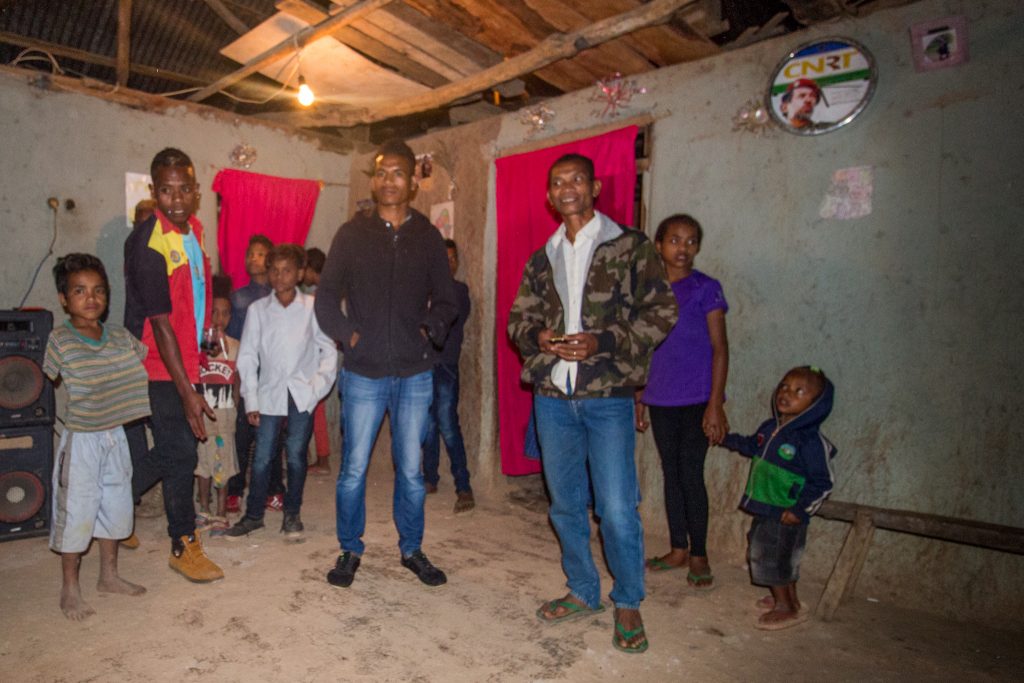 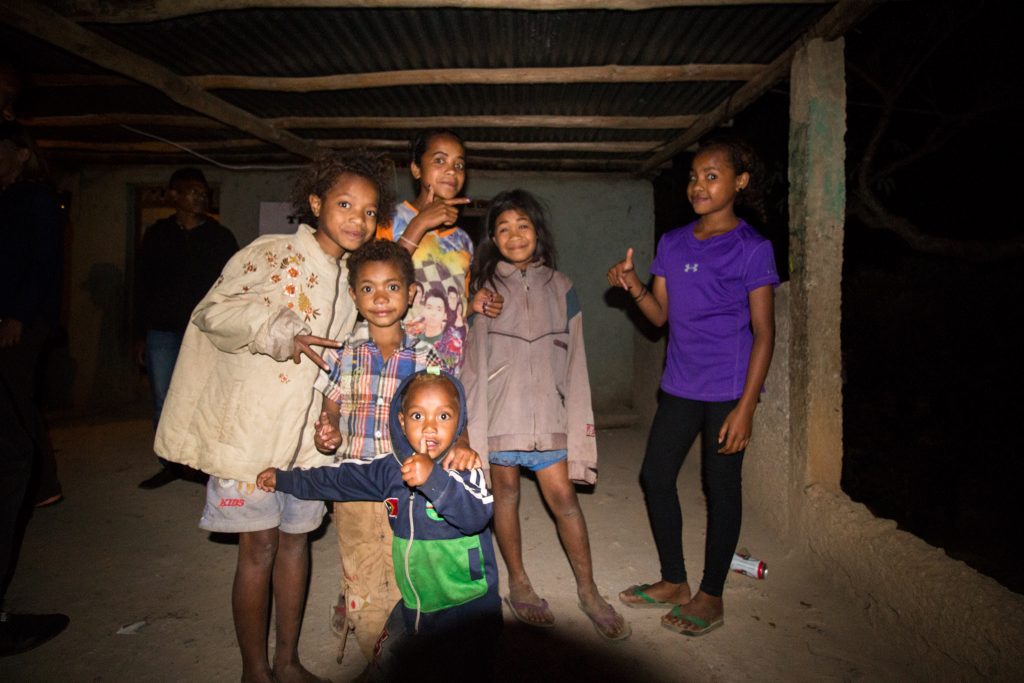 In the morning, we hopped back on our bikes and drove back to Dili, the capital. Being a Sunday and holiday, every local was dressed wearing their Sunday best. Meanwhile, I’d been wearing the same outfit for days and smelled… earthy. 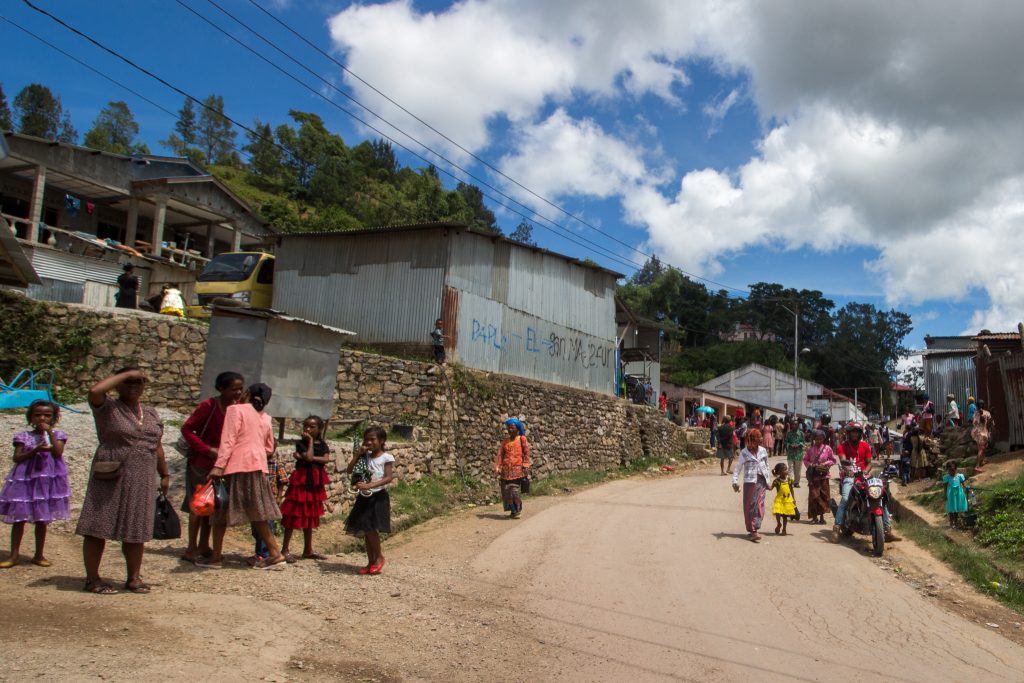 My friend and driver of my motorcycle was an English teacher in Dili, who’d lived in East Timor for the past few years. He was the best at speaking with locals and knew of many of the sites worth seeing. On our way back to the city, we took a few side routes – including a road that was solely mud.

We blasted through an especially deep patch, only to see two locals coming our way get stuck.

We all took off our shoes and pushed their motorcycle through. They pulled out their point-and-shoot camera and snapped a selfie with us. I guess it isn’t everyday that a group of malae help push your motorbike through a sludge puddle. 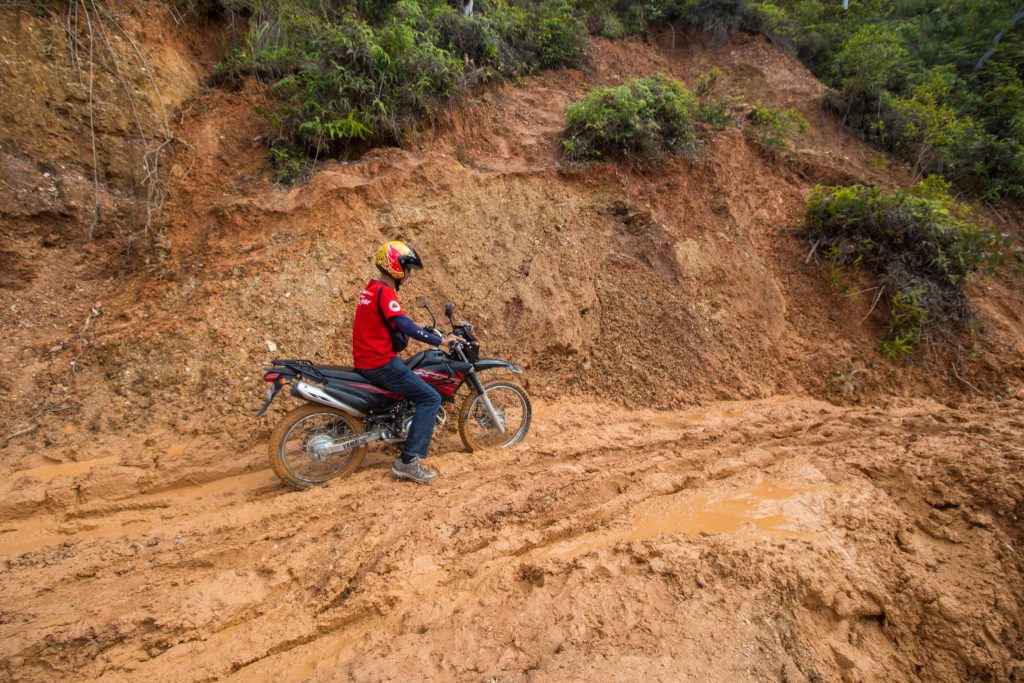 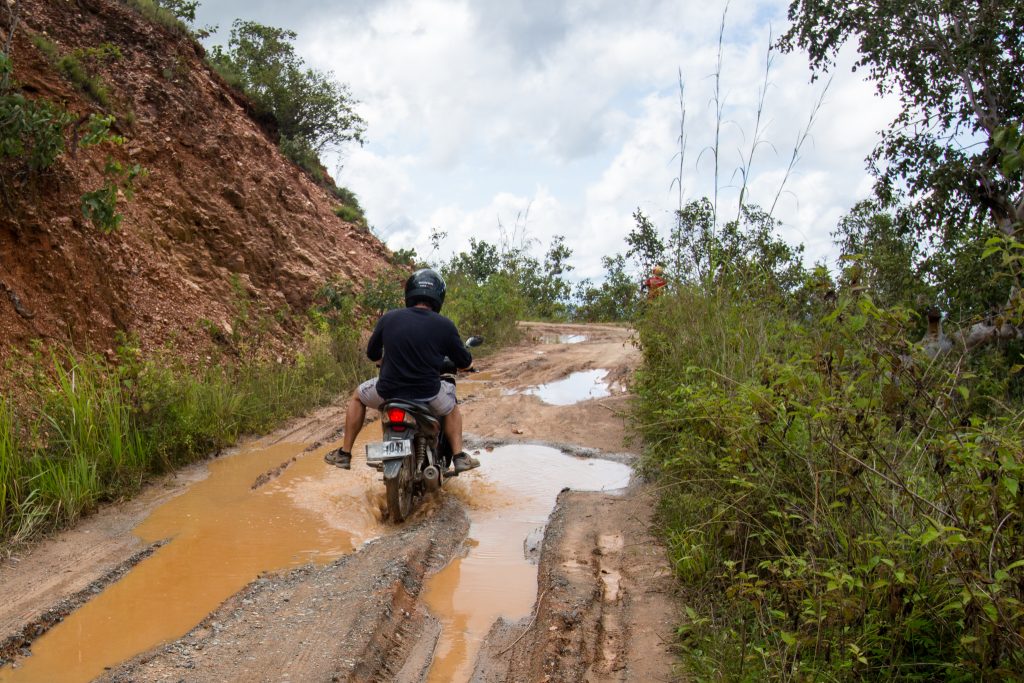 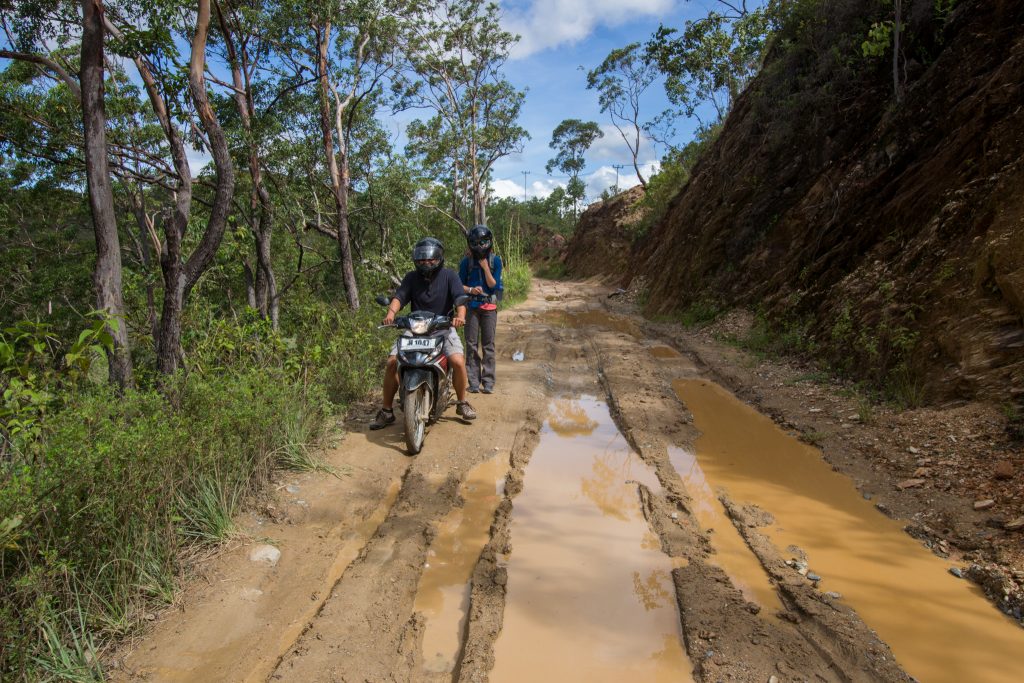 We made it back to the dust-covered streets of Dili safely, without any Timorese fiasco. The days before, I was more than happy to leave East Timor and looked forward to curling up on my mattress, eating sterilized GMO food, and driving a vehicle with four doors. But after this motorbike journey, I was happy that I got to experience a few extra days of East Timorese hospitality, countryside, and two-step dancing fun.