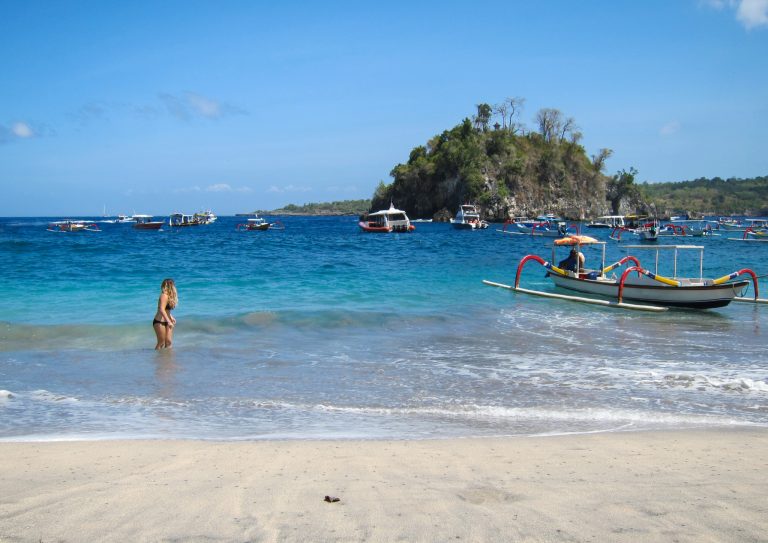 Motorbiking (and Crashing) Around Nusa Penida

“I’ve never driven a motorbike before… is it dangerous?” Hannah asked, fully trusting my response.

Nusa Penida is an island off of the coastline of Bali near Nusa Lembongan. When Justine from Travel Lush wrote a post on how Nusa Penida could be considered the Bali of 50 years ago, motorbiking around the island shot to the top of my Indonesia to-do list.

Hannah and I received the keys to our motorbikes and slowly drove down the dirt path leading away from the dive resort we were staying at (yeah, the terrible one).

Paper map in hand, we weaved through tiny villages where locals gathered together on shaded bamboo platforms and raised their hands as we drove by. Chickens ran across the road in search of existential meaning. I expected to see modern resorts or spa retreats that looked like the buildings that dot the mainland of Bali, but there were none.

We made it to the top of a steep hill and followed the sign pointing to Crystal Bay, one of Nusa Penida’s top snorkeling sites. I looked back at Hannah, blissfully unaware that though I drove a motorbike in Australia, I haven’t ever ridden one on such a steep and potholed road. My stomach churned with a mix of excitement and fear as we raced down the tarmac to the bay. 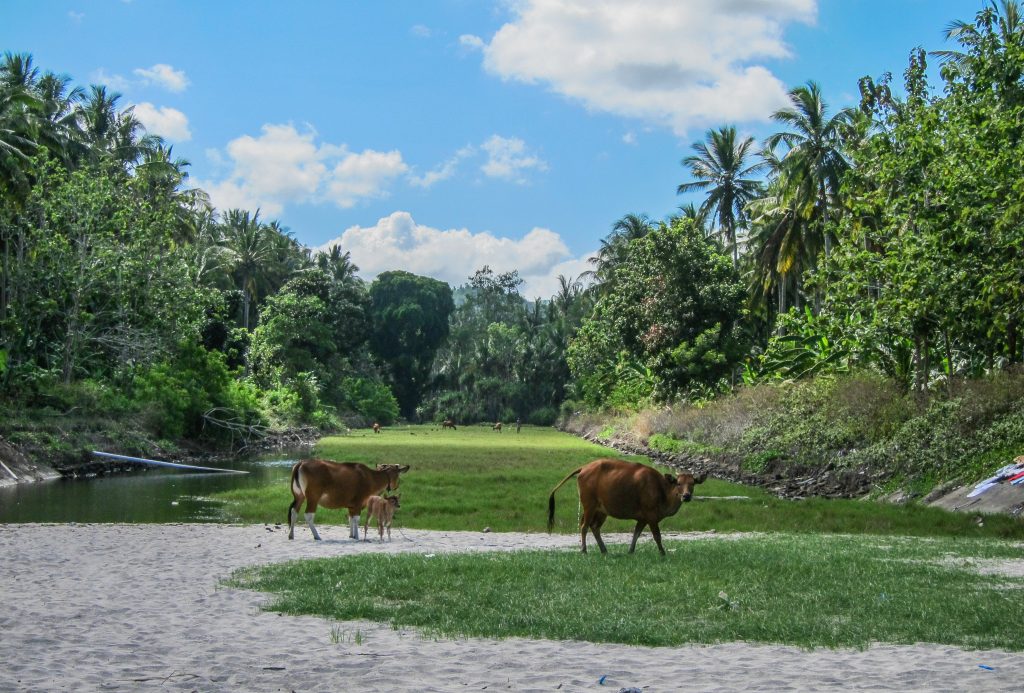 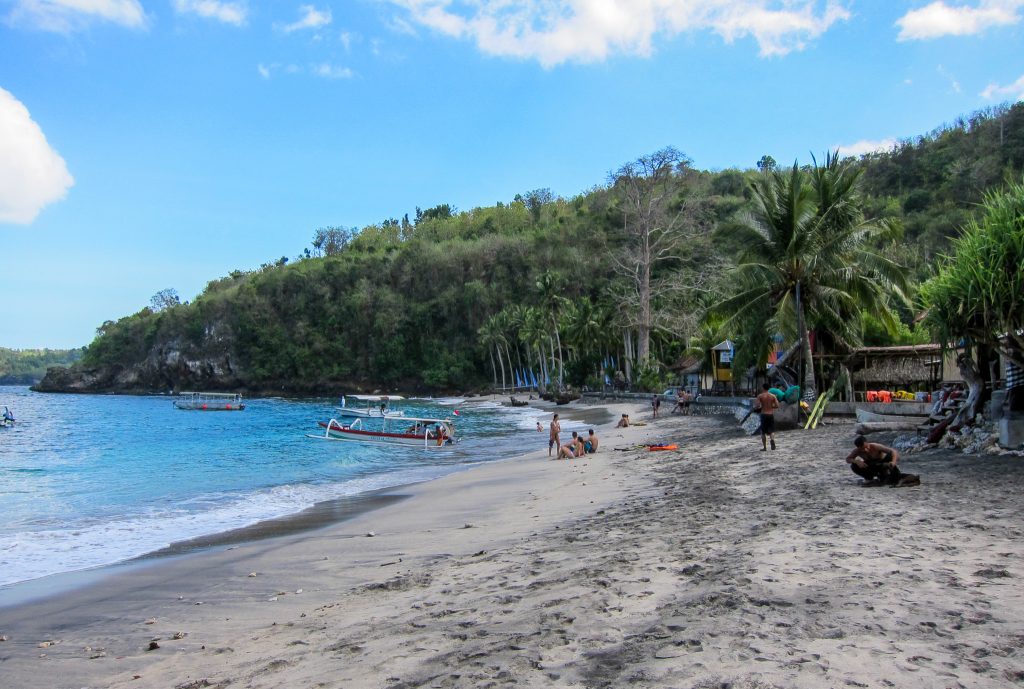 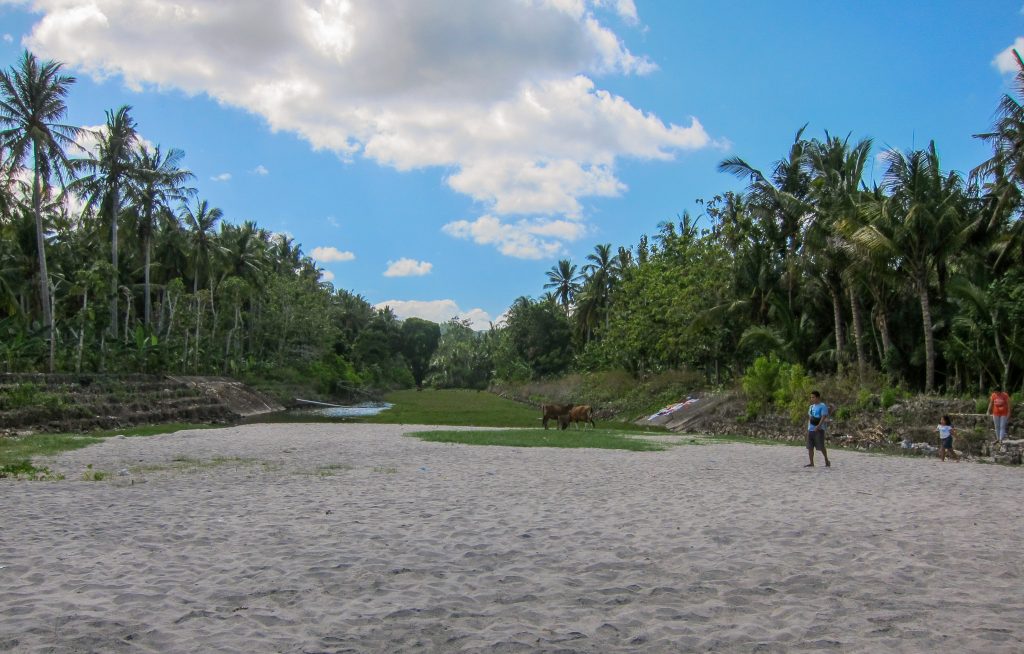 Sweating from the humidity, we parked our bikes, stripped down into our bikinis, and jumped into the sea. A strong current swirled us around the bay, making it impossible to stop and get a closer look at any marine life. A huge set of waves rolled through and smashed against a nearby cliff wall. The waves ricocheted back into the bay, scooping Hannah and I up with them. 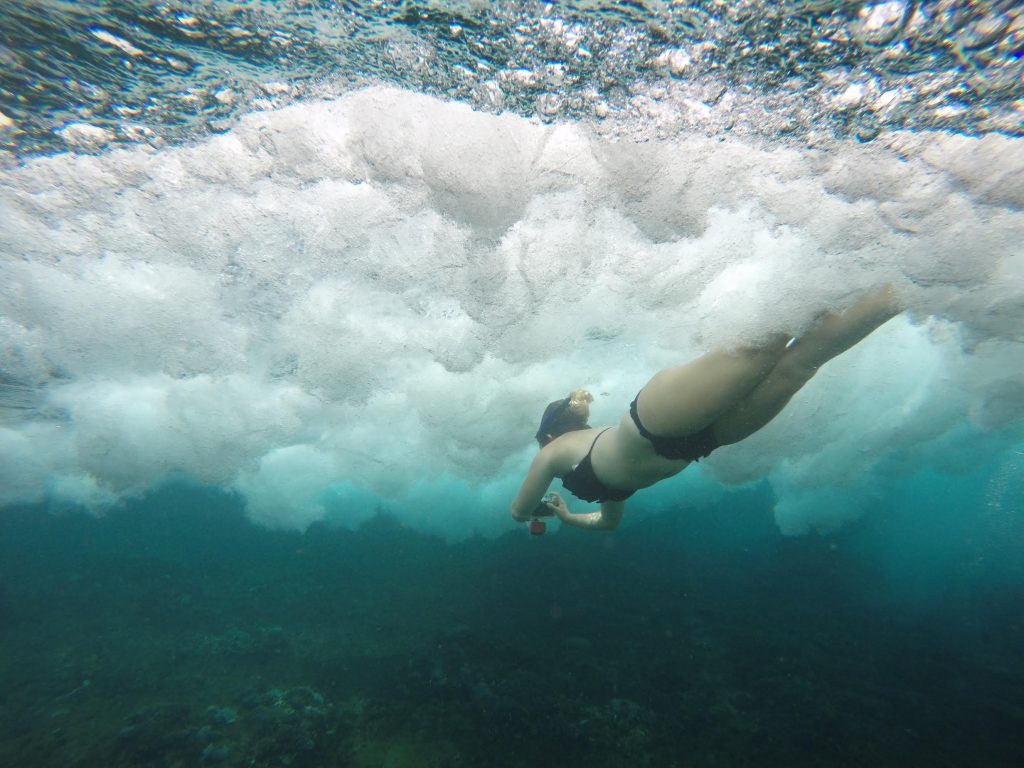 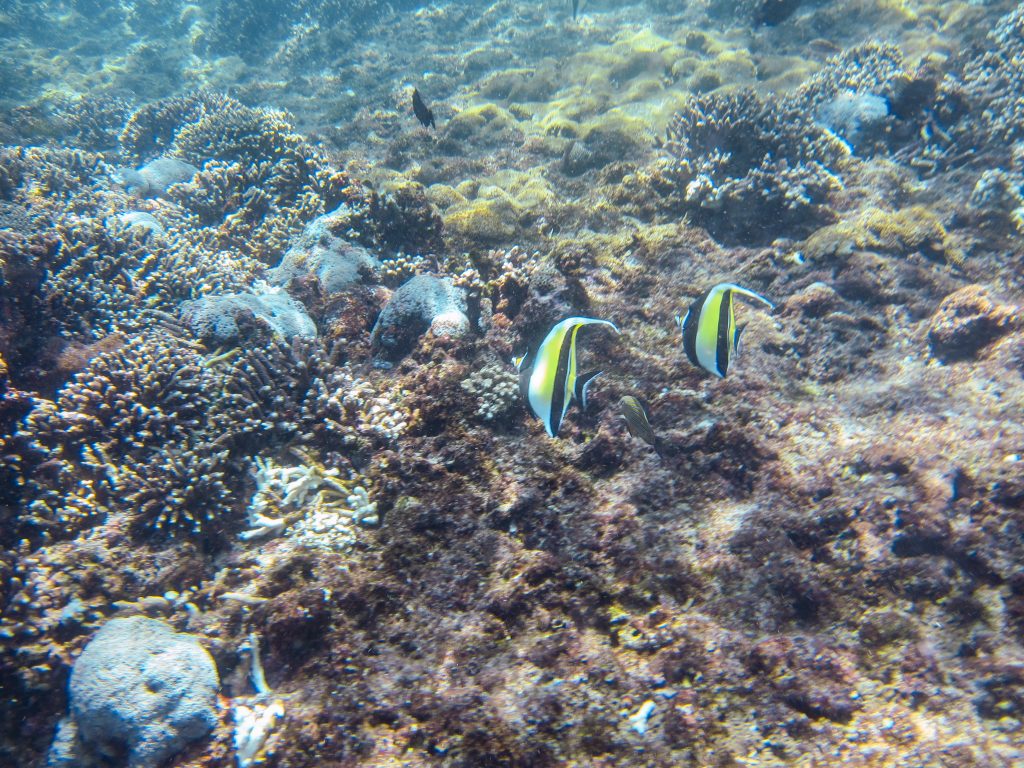 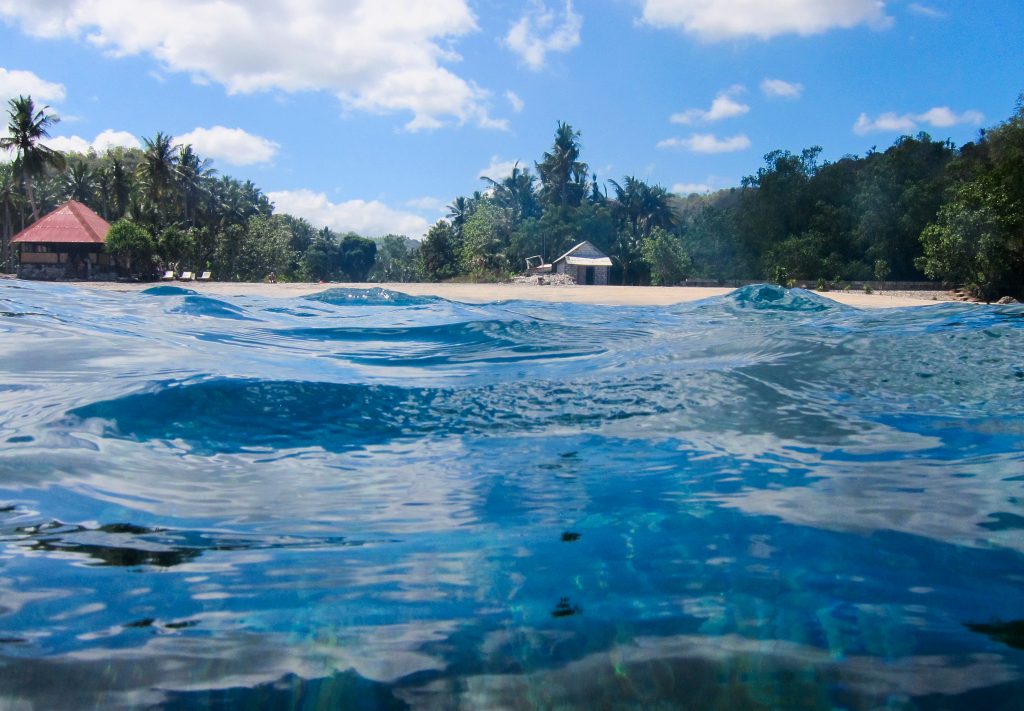 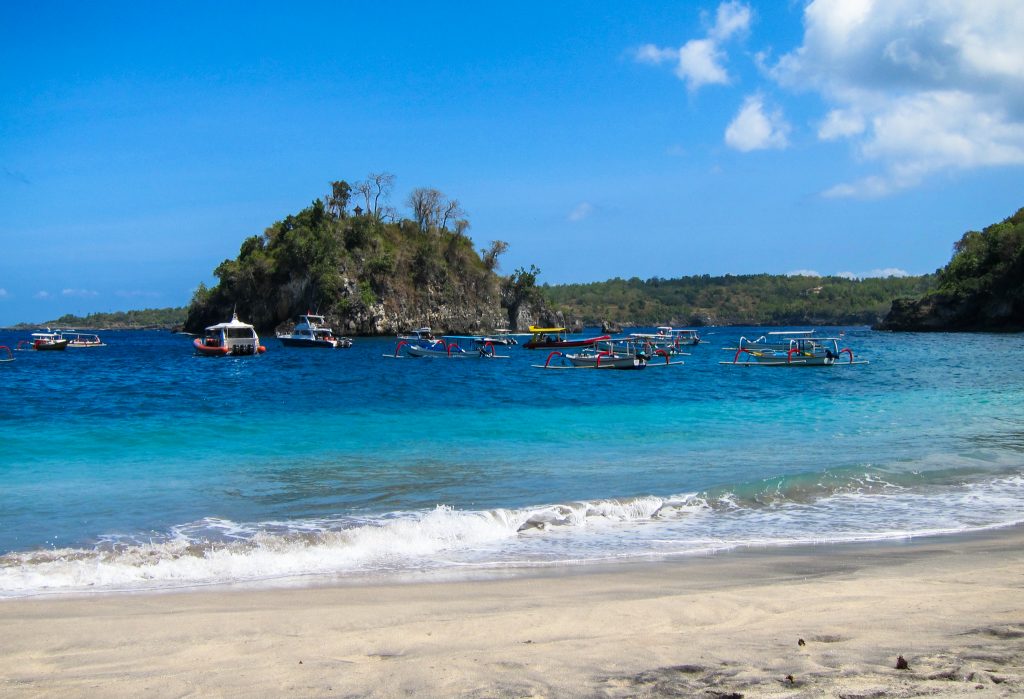 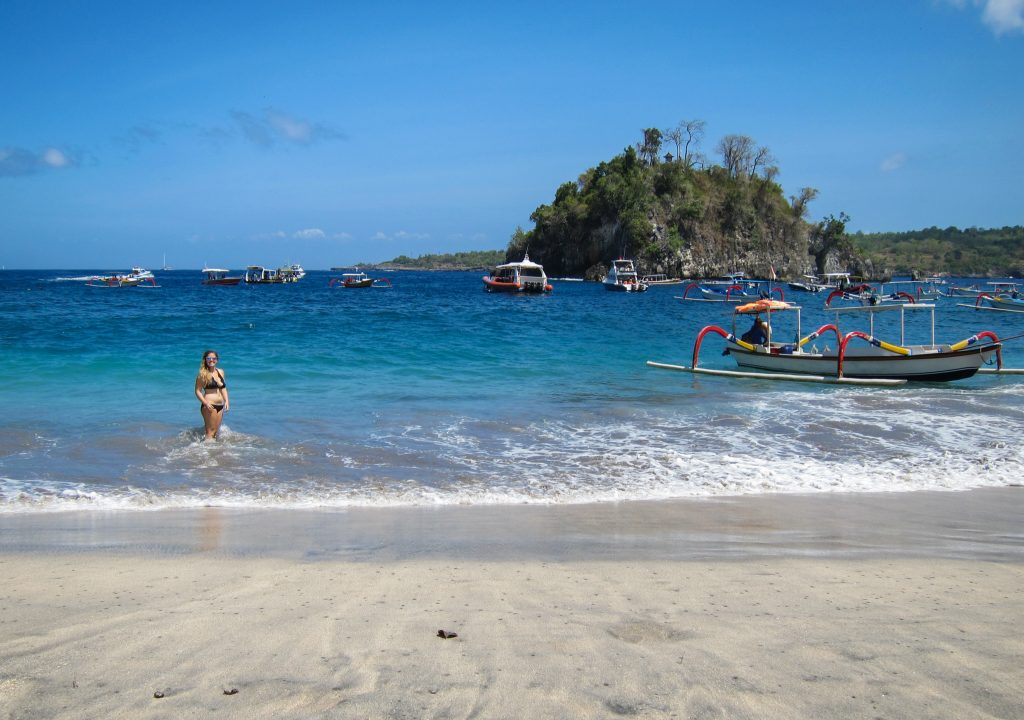 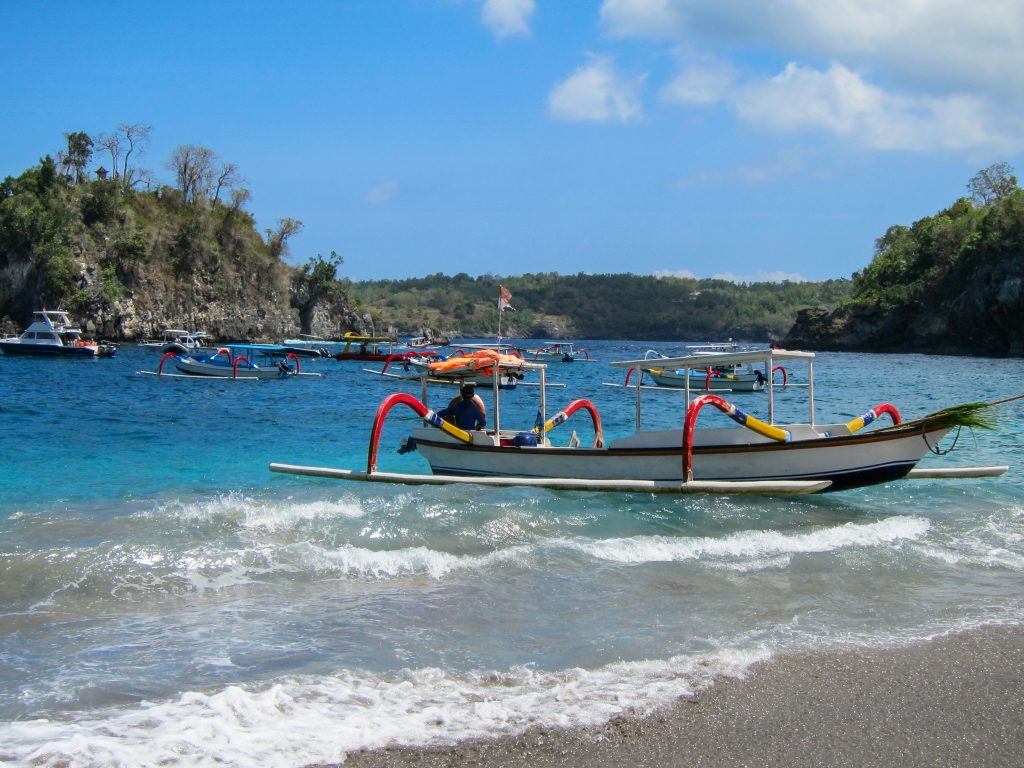 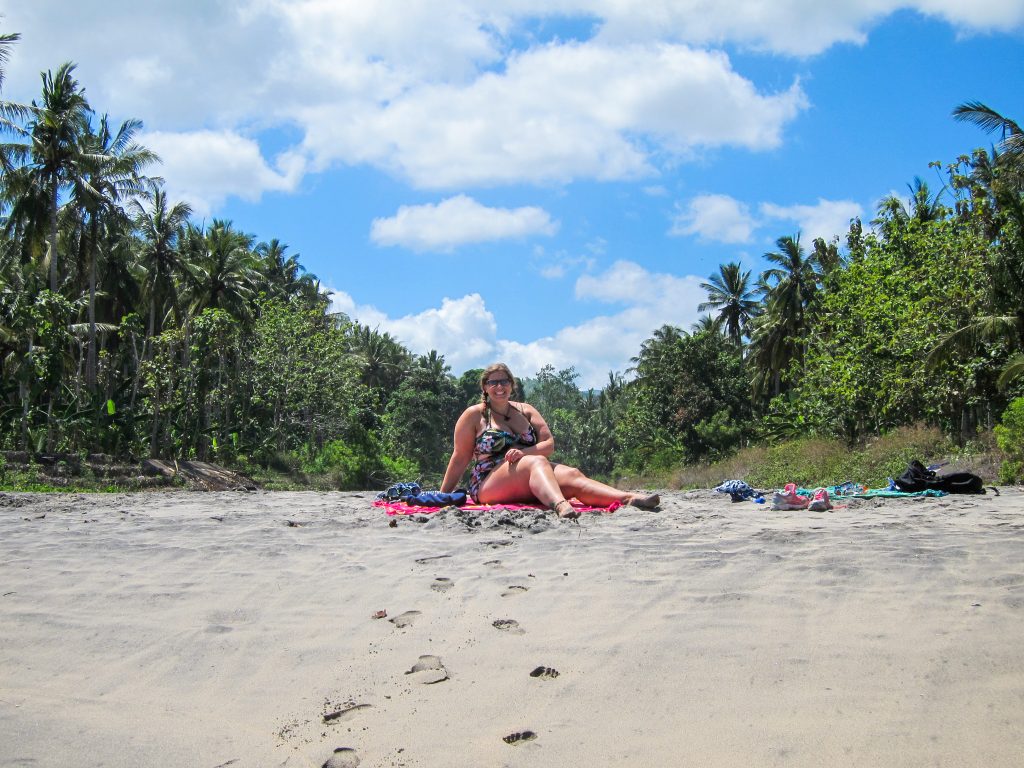 Back at the beach, we dried off and hopped on our motorbikes in search of waterfalls and incredible lookouts.

Our crude map vaguely outlined where the Temeling Waterfall was, a cascade and temple cherished by Balinese Hindus. A local leading a French couple sped past us on their motorbikes, so we followed, figuring they were for sure heading to the same destination.

We made it to the entrance that led to the Temeling Waterfall, where of course — a group of local men lounged around socializing, attempting to sell cheap sodas and juices to tourists that came by.

A hen led her chicks around the stall.

One of the men pointed to the chicks and said, “They’re going to be soup someday. Very delicious.”

The narrow path down to Temeling Waterfall took us through a lush jungle. After a few kilometers, the tiles gave way to a dirt trail. There was a cave wall on one side and a steep ravine on the other. I panicked a little about falling off the side and looked back at Hannah.

“Are you okay to go down this?”


On Hannah’s first day driving a motorbike, she bombed down gravel hills and teetered along cliff edges. I felt guilty because she didn’t know how insane this was (or at least she didn’t show it). It was like inviting someone over to play Socker Boppers and then throwing them into a Roman gladiator pit. She was the yin to my yang, her happy-go-lucky attitude telling me, “Hit the gas, Chantae! It’ll be fine!”

We made it to the bottom of the motorbike path. The dirt path led to a bamboo lounge structure with a panoramic viewpoint of the sea. We kept walking down a series of carved steps to an teal watering hole with a Hindu shrine beside it. 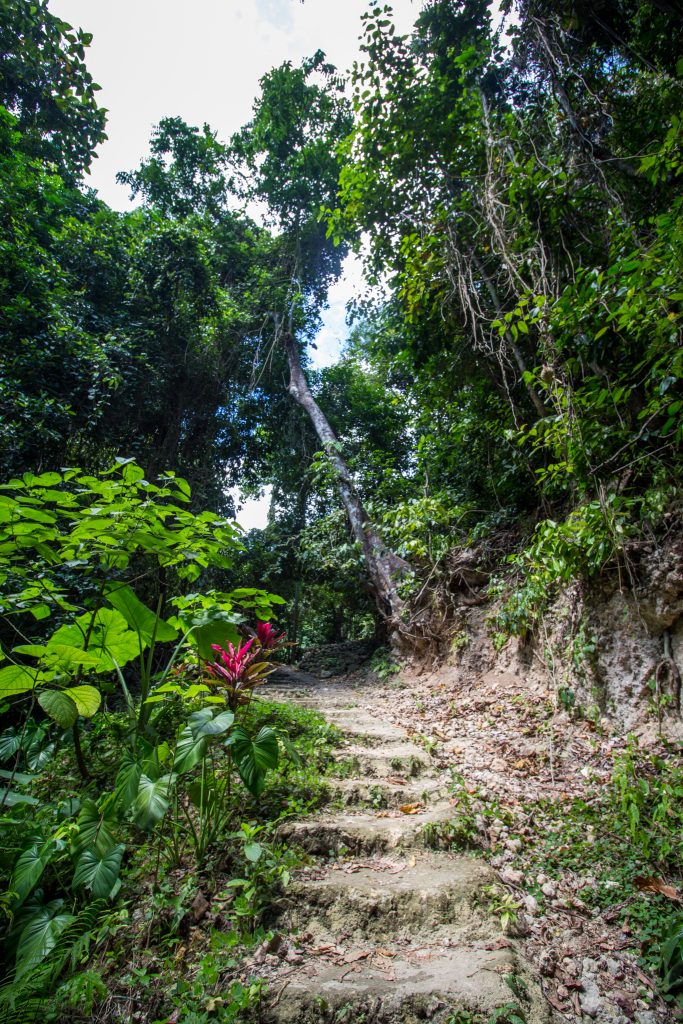 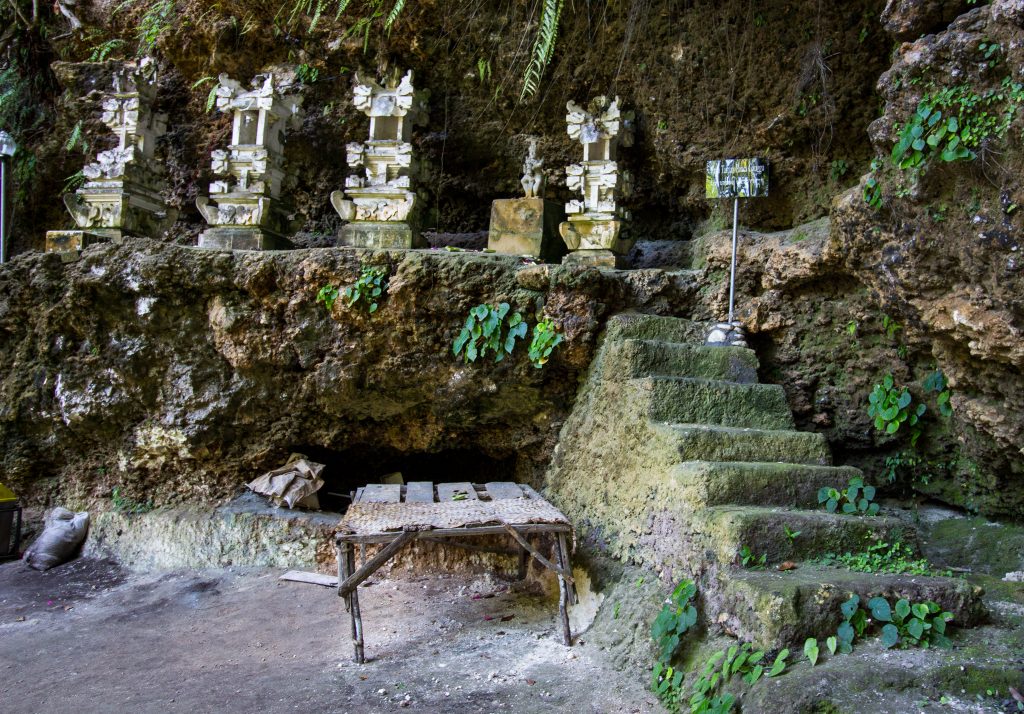 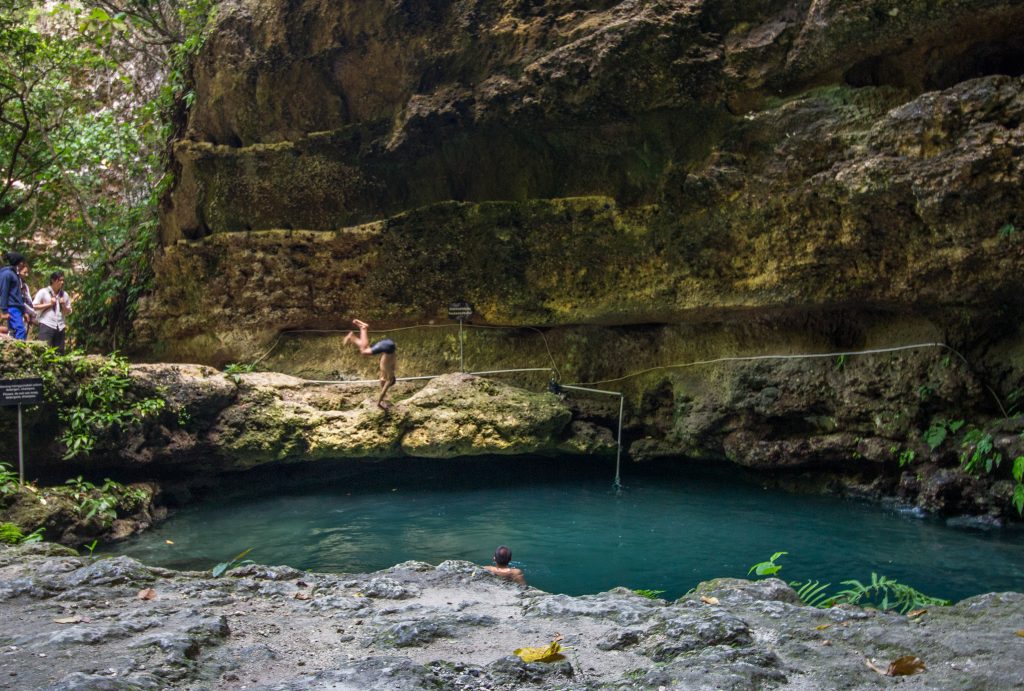 A group of local kids took turns jumping into the water. At one point, the Frenchman tried to climb on top of a ledge to jump higher. The Indonesian kids waved their hands, signaling for the Frenchman to stop. After a few translations between the Frenchman, the kids, and their Indonesian tour guide, it was communicated that we should never climb higher than the temple shrine. The Frenchman scampered back town to a respectable level. 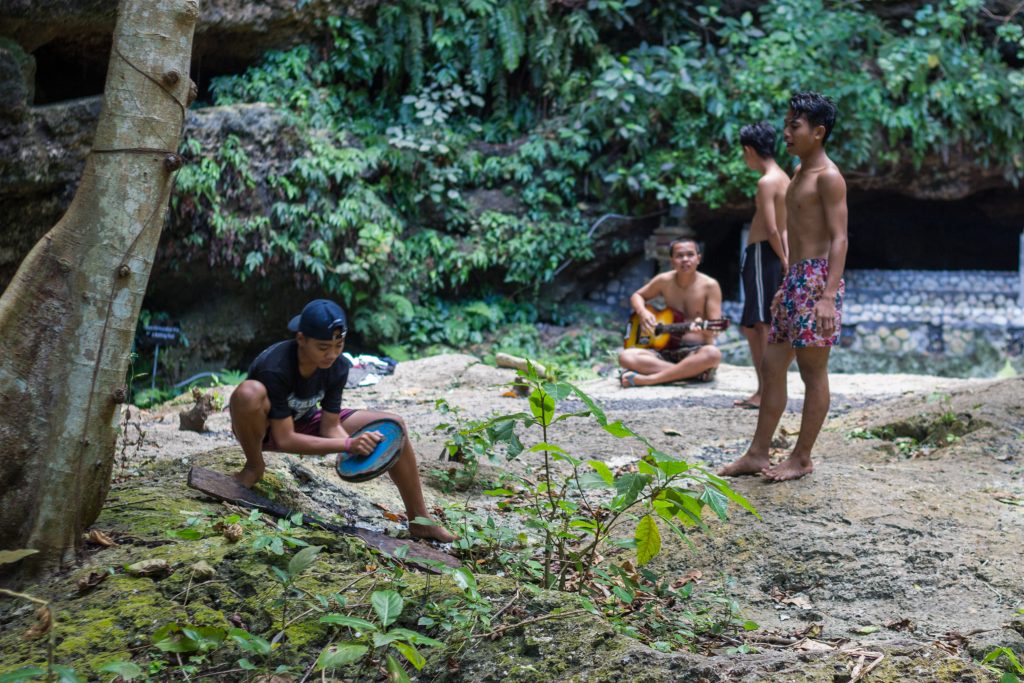 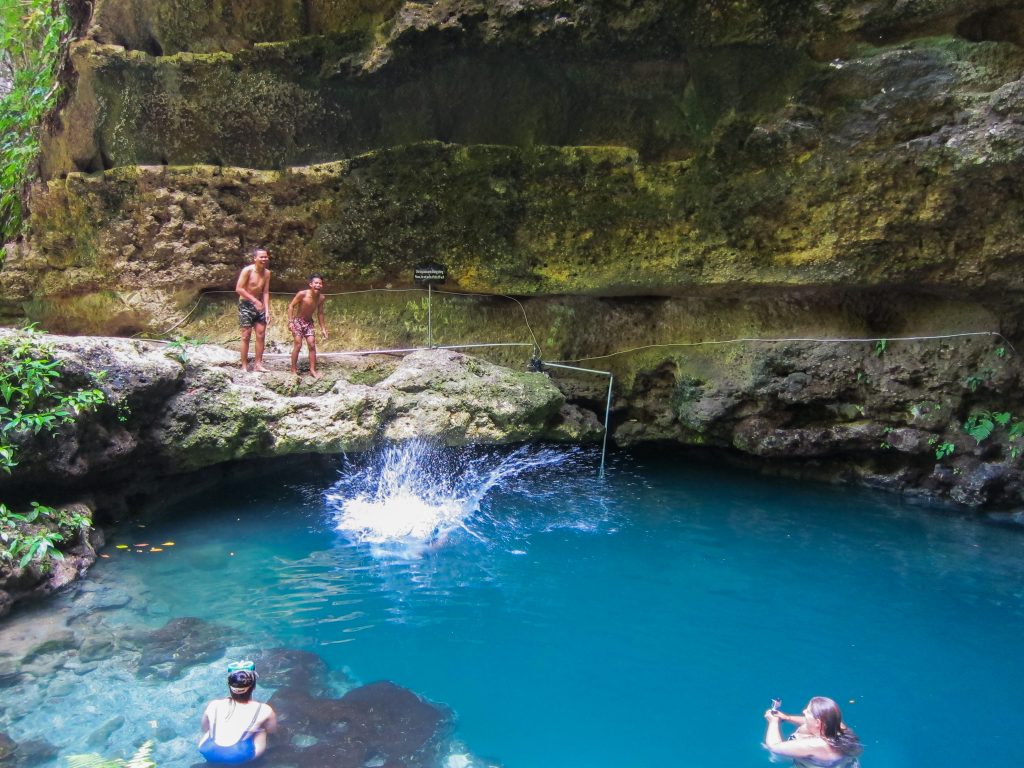 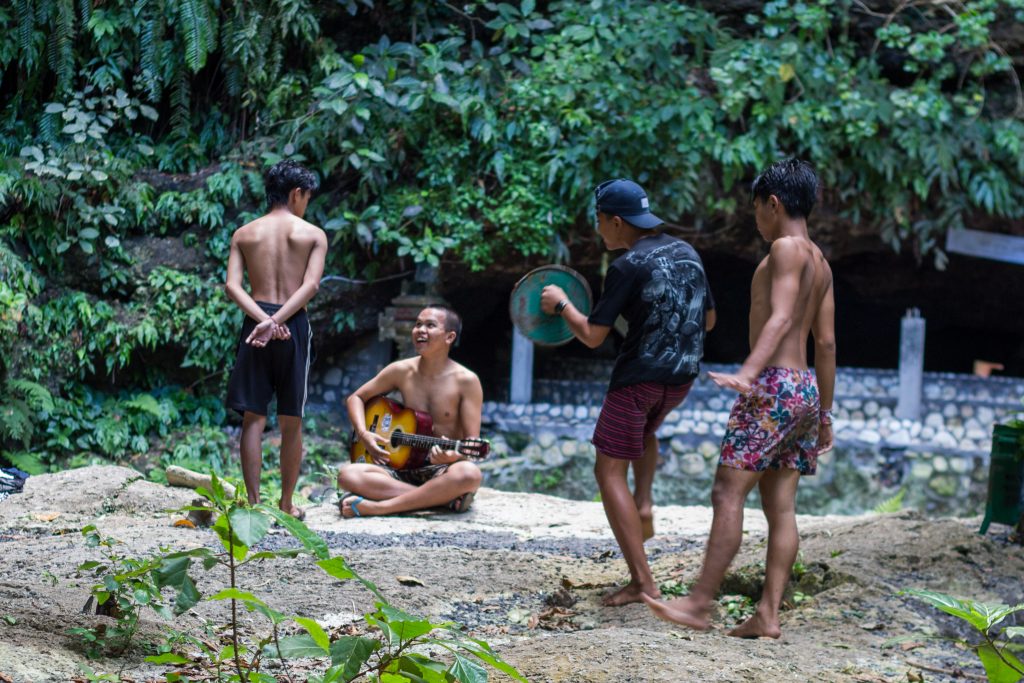 I was nervous about driving back up the path on our own. What if we fall off the side? How are we going to get back up?!

And remember Justine, the one who inspired us to go on this little adventure in the first place? Well, I must have skimmed over the part where her boyfriend crashed his motorbike at this exact spot. I only read this recently, and I’m so happy I didn’t know this fun fact before embarking on the motorbike adventure.

I tried to ask a local if he could set the pace ahead of us with his motorbike, but this was lost in translation. Fortunately, we thread through the path safely and continued exploring Nusa Penida under the bright sun.

We drove along road that was 60% gravel 40% chunks of asphalt to a lookout. The bike slipped out from under me and I dropped it. A few minutes later, I did it again. This shattered my confidence for the rest of the ride, making my hands shake and my mind uneasy.

At the Manta Point lookout, we saw the glimmering sea stretched out below us. Hannah and I walked to the edge of the point and looked down. The thrill of heights combined with the reckless sense of adventure you get when exploring an untouched island felt like pure bliss. We squinted into the water in hopes of seeing mantas but couldn’t spot them through the carpet of blue. 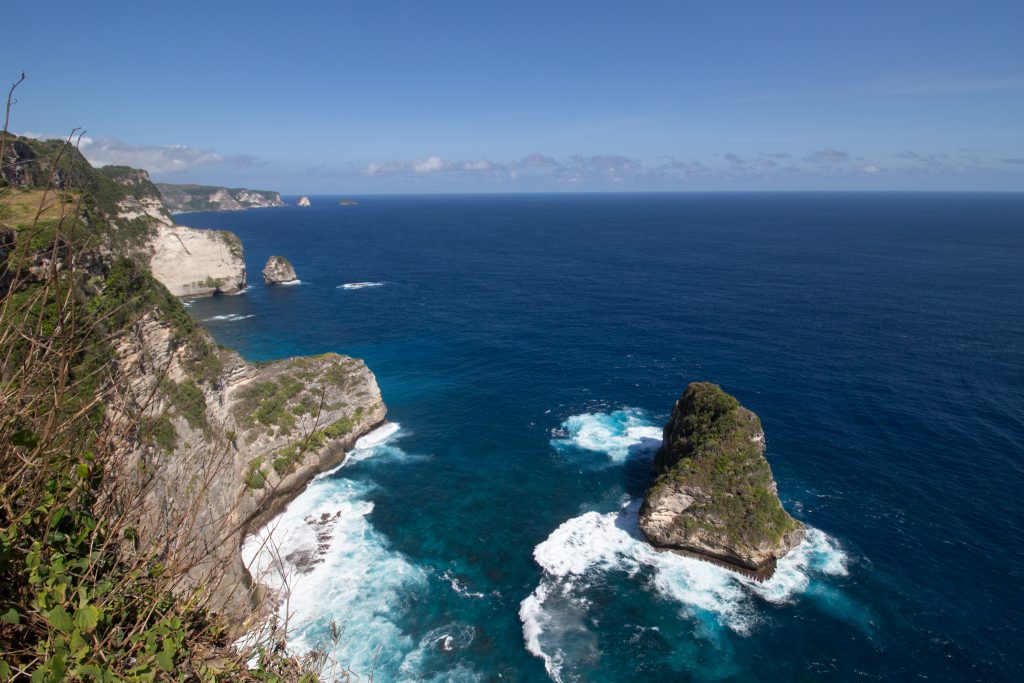 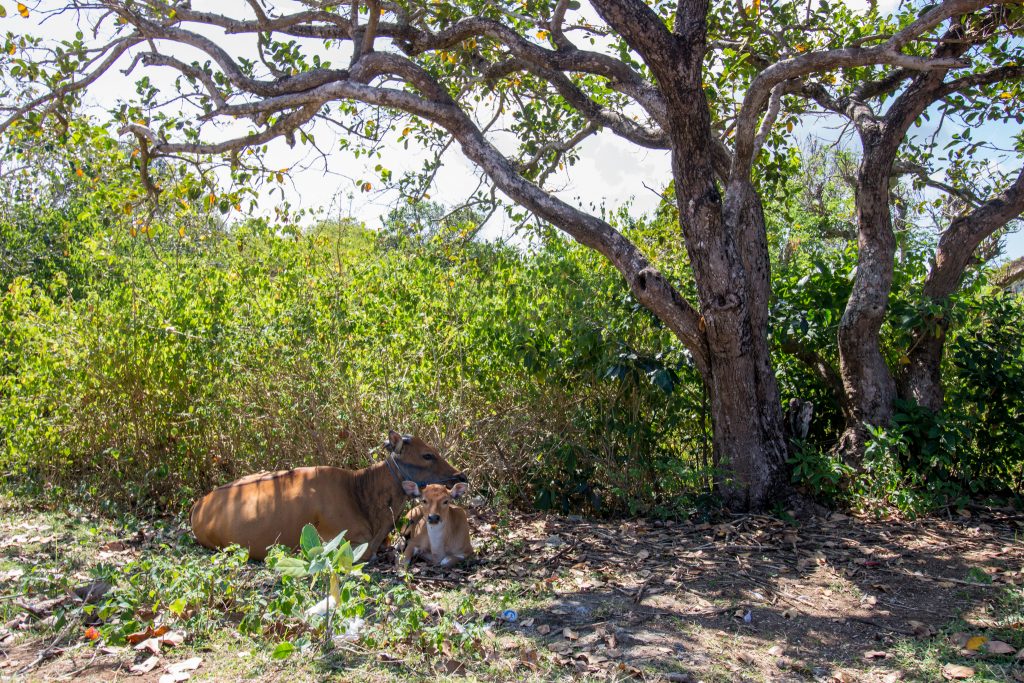 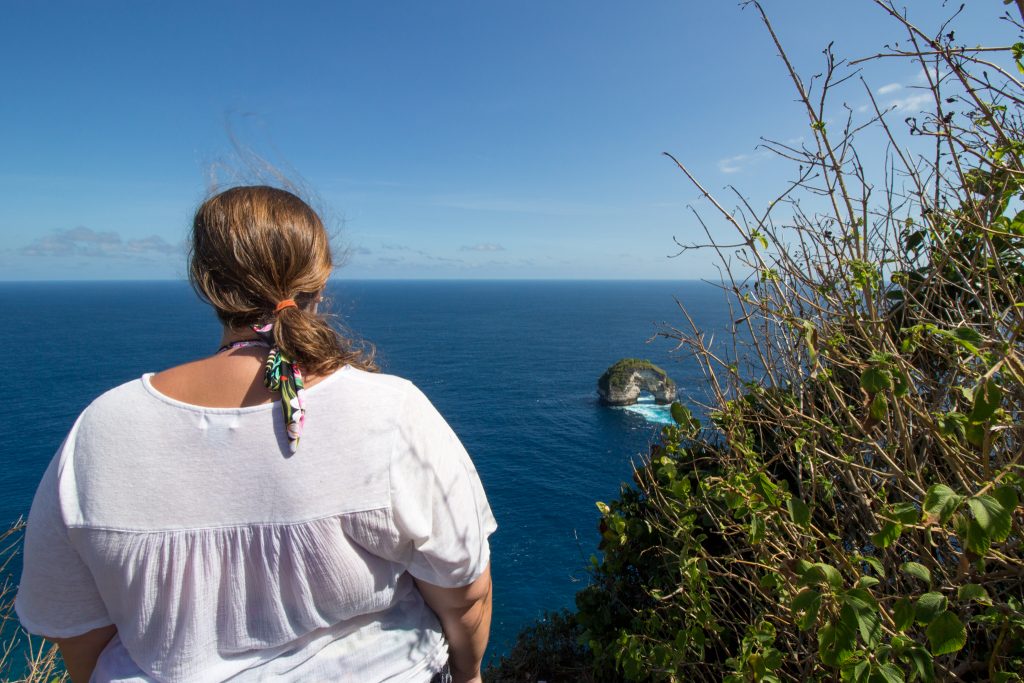 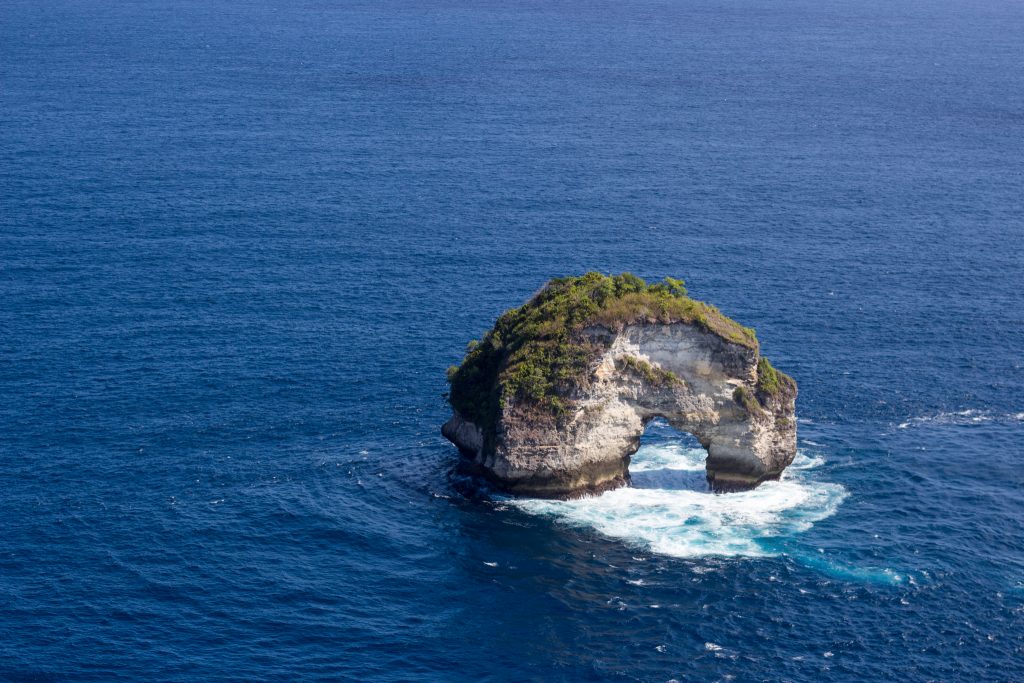 The sun neared the horizon and we made our way back. While we were driving down a steep hill, I drove into a patch of gravel and hit the brakes. By the way, never brake in gravel! The bike crashed onto the ground, throwing me into the middle of the road. The skin on my knee, palms, elbow, and chest was scraped off. I wanted to ugly cry a tiny bit but instead yelled, “I want to get off the ride!” 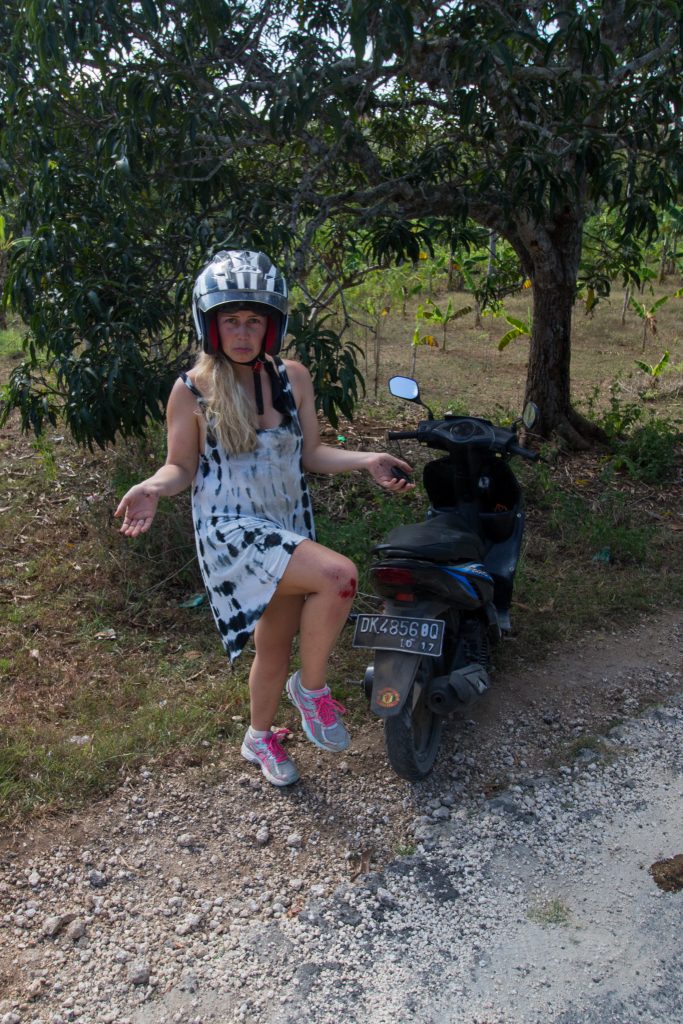 Then I asked Hannah to take a picture.

“What? You want a picture? Are you sure you’re okay?!”

Bloody and tired, the day quickly turned from I could do this forrrevvver to get me the hell home!

I led the way back to our dive resort down more gravel/tarmac roads of death. There was one stretch that made my heart race. The bottom of the hill a hole filled with deep gravel and a thin strip of road to drive through. It’d be easy to miss and terrible to fall in.

My bike made it over the patch and I kept driving.

A few seconds later, I noticed that Hannah was no longer behind me.

A couple came up to me and said, “Is that your friend back there? She just took a spill. She looks just like you now!”

Hannah slowly drove up minutes later with nearly identical wounds as mine — a gashed knee, cut up hands, and a scrape along her thigh.

As I drove past the villages, locals pointed at my bleeding body and went, “Ooooooh!”

A second later, Hannah drove by. Locals pointed at her bleeding body and went, “OOOOOHHH!!!”

When we got back to the resort, the local staff rushed to give us antiseptic and bandages. I’d smashed the mirror and one of the side panels of the motorbike, but they didn’t seem that concerned. Later, they’d hand me a bill of 200,000 Rp, around $20 AUD, for repairs.

“Who needs travel or friendship tattoos when you could have matching scars?” Hannah mused while picking out chunks of embedded gravel.

Freaking Hannah. Always so positive and happy when we should really be dwelling on how terrible life is. 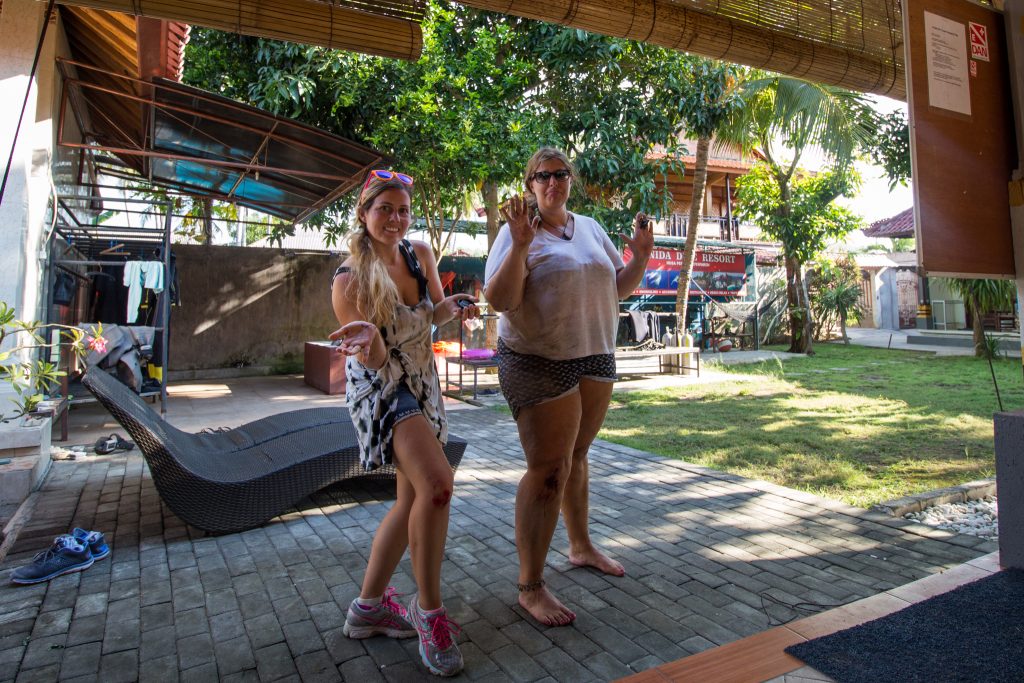 I felt really guilty for convincing Hannah to join me on the joyride — but she took the fall like a champion. It ended up being both a blessing and a curse that we both fell off of the bikes and injured ourselves in the same way. For the next few days, we tended to each others wounds and spent the days lounging on the beach. If only one of us had fallen, we would have felt bad for leaving the other behind, especially for things we’d planned to do together. 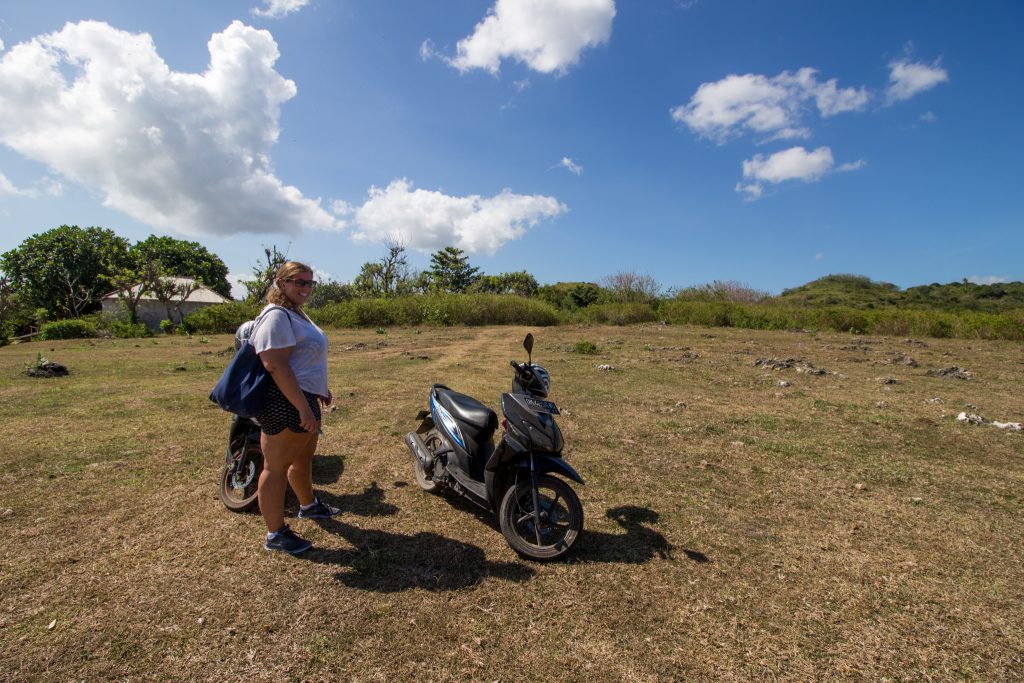 The unfortunate fact is that many tourists who motorbike around Southeast Asia sustain serious or even life threatening injuries — not just annoying scrapes that keep you out of commission for a few days. According to Adelaide Now, 504 people died on Bali’s roads in 2015. This isn’t that surprising when you look at the road conditions and consider that many Balinese drive like they’re going to be reincarnated.

Slow down, buddy. Not all of us get multiple shots at life here!

Take the proper precautions when motorbiking around Southeast Asia. Always wear a helmet and opt for a rental car in lieu of a motorbike in crowded areas or if you don’t feel comfortable. 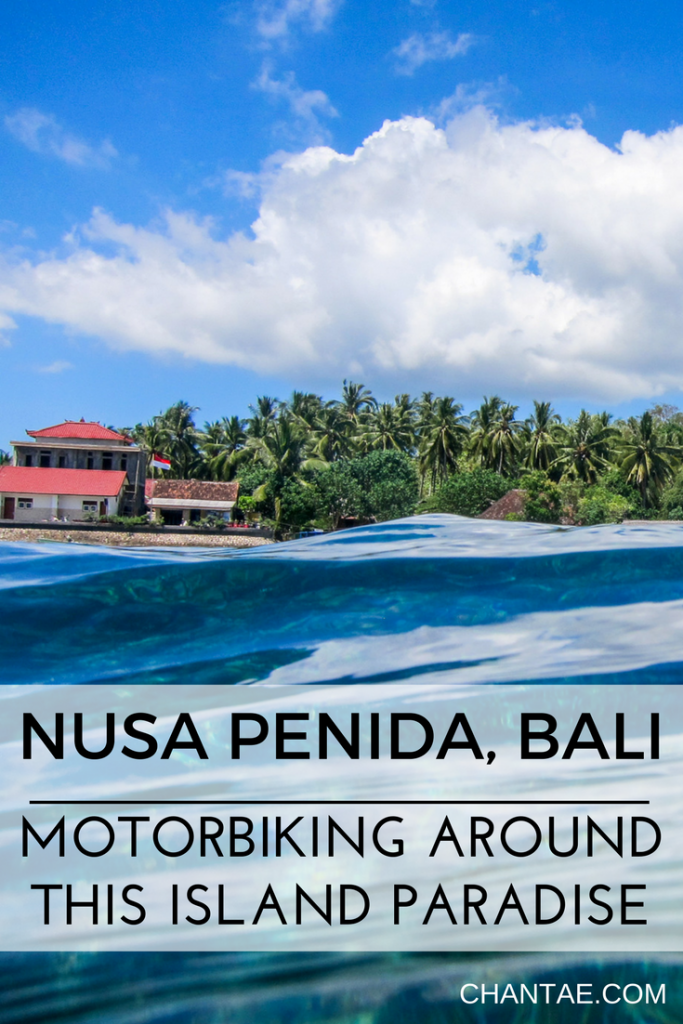 What about you? Have you ever had a travel fiasco like this?