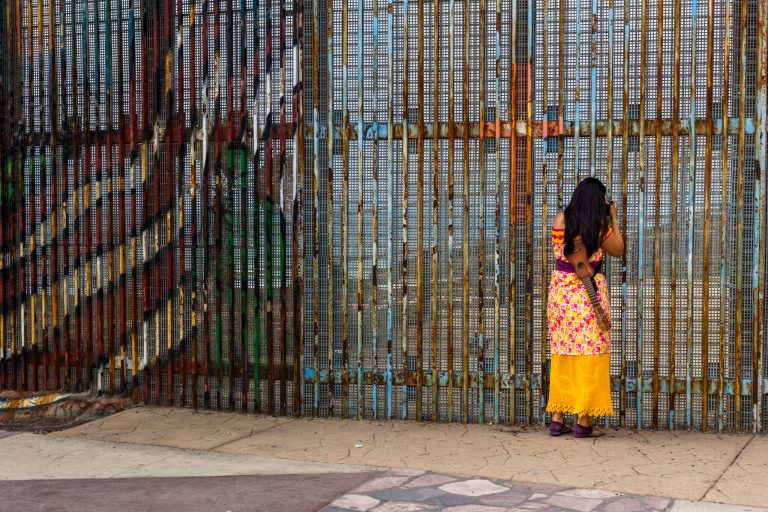 At the Wall that Divides Us: The California Mexican Border

I handed my passport to the Mexican border patrol agent.

“Does it take a long time to come back?” I asked him.

He smirked and averted his eyes. I tried to make small talk anyways but he responded to my words with silence. Within a minute, he’d granted me a visa and I was free to enter Mexico.

A few steps later, I crossed the border from the U.S. into Mexico as easily as walking in and out of a shopping mall.

The day before, my friend from high school and journalist, Derek, mentioned he’d been covering a story in Mexico that follows a border patrol agent and a few families who meet at the border fence every weekend to talk to their loved ones. I asked if I could come along and promised to be just a shadow while he worked and made connections. A taxi driver in a yellow cab waved us in and we directed him to Playa de Tijuana, or Friendship Park. Every weekend, families from both sides of the border meet at a mesh fence to exchange stories and reconnect with their loved ones. Once a year, the gate opens for a few minutes, allowing children to hug their family members — sometimes for the first time. This weekend, like most weekends, the gate would stay firmly shut.

“Don’t get in another colored cab.” Our driver lifted his hand off of the wheel, revealing four full-sized fingers and one stump. “Another taxi driver shoved me in the back of the trunk. Cut off my finger. Don’t take the blue taxis — very dangerous.”

“Do you think he’s for real?” I whispered to Derek.

At least it wasn’t the thumb…

We arrived at Friendship Park fifteen minutes later, and I was happy to be out of the car and away from the mysterious nine-fingered man. About sixty Mexicans with guitars and colorful clothing played music against the fence. Across the fence were paintings of murals depicting hearts, the word ’empathy,’ and two fingers interlacing. Though the U.S. side was strictly controlled, with a tight ratio of Border Patrol Agents to visitors (who entered through an extra fence), the Mexican side was an unregulated party complete with dancing, singing, and food carts. “Is it always so lively?” I asked Derek, who’d been here multiple times before.

“No, this has to be some sort of celebration.”

We watched for a few minutes as families and friends touched fingers through the tiny holes in the mesh. A father held up a child’s painting for his loved ones on the other side. A couple walked to the side of the crowd, craving privacy. We were the only yanquis around and at times I felt displaced, wondering if I was perceived as an eavesdropper, snooping on the wrong side of the border. However, all the people around us never made us feel unwelcome. Any eye contact made was met with a slight smile. But for the most part, I was invisible. We walked along the boardwalk. I could see Imperial Beach from where we were, a place I used to teach surf lessons during the summers while I was at university. The smell of corn cooking on a roadside cart mixed with the stench of an open sewer. Money, culture, opportunity — there was more than just metal dividing the two cities. The steel fence jut out into the ocean. On a foggy day, some attempt to swim out into the sea and around it. After forty minutes or so, we walked back to Friendship Park, where the singers and dancers were performing with just as much vigor as when we’d left. The song went on forever. A short woman with a wide smile walked up to us and pointed to our cameras. “Periodista? Journalist?”

I nodded and called Derek.

She introduced herself as Maria, an activist who devotes her time to helping those in need around the entire Tijuana area. She waved over a man wearing a shirt with “Border Angels” printed on the back and told me about their group. The Border Angels are a nonprofit who aid in legal affairs and psychological support for those who’ve been deported from the U.S. Next week, they would be joining a protest led by deported U.S. veterans. The week after that, they’d be dropping off water and food along the border’s most barren areas, to help anyone risking their lives to cross over.

Border crossing is a business that’s lucrative for the coyotes, or men paid to smuggle lead people over the border, and often deadly for those who attempt it. (You can read a fascinating in-depth account by Derek on this post, A Tour of the Border.) I don’t understand those who can have such animosity towards people willing to spend all that they have, separate from their families, and risk death in search of a better life. I thought back to the rusty letters sprayed across the fence. Empathy: something that isn’t widespread in the U.S. milieu. We asked Maria if she knew where we could hail a taxi back to the border checkpoint. She offered to take us herself — if we didn’t mind stopping at a homeless shelter along the way.

We couldn’t see into the back windows of Maria’s SUV because it was filled with used clothing. I opened the door and tried to crawl in. I picked up an unopened package of adult diapers and searched for a place to put it, but resigned to setting it on my lap. Every nook was stuffed with toys, clothing, toiletries, and supplies. Derek crammed in beside me and Maria’s friend sat up front.

“The Mexican government, they don’t like me talking to the media. A boy was shot in Tijuana — nobody cares. There’s no story. There’s no action. They want to cover it up and pretend it never happened. Why doesn’t someone care? I’ll talk to anyone who will listen. Just a few weeks ago, I reported to the media that there were hundreds of homeless people sleeping in the hills. The next day, the government came and found a new place for them…” She laughed, “I don’t care if anyone doesn’t want me talking. I’ve worked in tough jobs my entire life — drugs, AIDS, mental health problems.”

Her voice went quiet. “I’ve already lost my son to cancer. I have nothing else to lose.” We arrived at the homeless shelter. Through the window I could see that it was filled with older men. Maria sorted through the mess with military-like precision, pulling out only the male’s clothing.

“I’ll drop the rest off later, somewhere else.” She told us as we hopped back into the car and weaved through the busy streets.

Derek made plans to see her again next week. I bid her goodbye.

The day before I visited Friendship Park, my little sister and I attended a Trump rally (not as supporters, but as observers). The anger in the sea of voices chanting, “Build a wall! Build a wall!” at the Trump rally was a disturbing contrast to the atmosphere of peace and community at the Mexico/California border wall. Build a wall to keep out people like Maria? Build a wall to keep out the people who spend their spare time dropping off water in the desert so that humans don’t die of dehydration? I wondered if the people at the Trump rally would be able to proclaim their separatist battle cry in front of a father touching his child’s fingertips through a cold metal fence.

Humanity is more complicated than us versus them.

After a short line and pass through a metal detector, we were back in the United States. Our four-hour wait was more like fifteen minutes.

Those few steps are the ultimate representation of privilege, where I can complete a journey in the matter of minutes that many other people on earth would risk their lives for. It’s a privilege I did nothing to earn, as it’s pure chance that my DNA assembled inside of the uterus of an American citizen, just one hour north of Mexico.

My passport is a genetic lottery prize, not a deserved item.