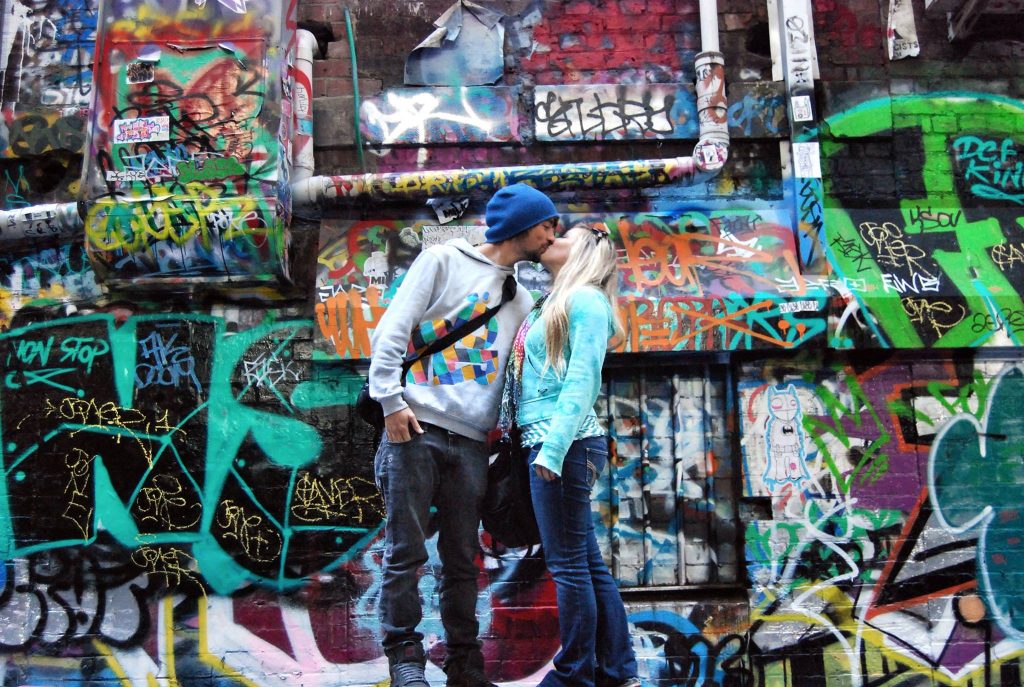 What you didn't see: Me falling into the dumpster water that puddled up nearby

Moritz needed to go to an oceanography conference in Melbourne for a few days and I was given the opportunity to tag along.

In a way, I’m an honorary student at the University of Western Australia. I’ve been to seminars, PhD defenses, and frequent the office. Whenever someone walks in asking where so-and-so is, I generally know the  whereabouts. I’ve even been asked if I’m the girl that answers the phone (the answer is no — but only because I’ve never heard it ring).

Moritz and I had to fly separately due to financial reasons. Moritz flew with reputable Virgin, while I flew with one of the sketchiest airlines in the business — Tiger Airways, whose terminal is located far away from any semblance of an airport. It’s as if an airline and the DMV had a lovechild. Basically, avoid Tiger Airways if possible.

We arrived to the airport and Moritz was told that his flight would be delayed due to “excessive fog.” Meanwhile, Tiger Airways flew me without any acknowledgement of bad weather. Needless to say, I was a bit frightened in the turbulence.

Our couchsurfing host, a resident Melbourne Aussie, picked us up and we went out with her and her husband to a restaurant where Moritz ordered and actually consumed a kangaroo!

And I had a small niblet but felt guilty after. The past few months have been my most gastronomically adventurous ones.

Apparently, the kangaroos that are used in the burgers are humanely killed. They bounce freely until one day a man comes with a shot gun and shoots one in the head, plucking the roo out of the mob (multiple kangaroos are actually called mobs). And it’s said that these hunters have 99% accuracy of killing the kangaroo on the first shot.

It’s funny how kangaroos make it into almost every memory that I have about Australia.

The next day, our hosts took us on a Melbourne street art tour. One of them being an artist himself – and you can check out his Facebook page – knew of all the best laneways. It had been a while since I got my street art fix, as Perth is a relatively aesthetically boring city in comparison. Walking around reminded me of my days spent wandering around downtown Los Angeles and Venice Beach.

I had my first taste of mulled wine near the river before going off to see the famous electric tree located in Melbourne Square. During winter, carolers come to the tree and it lights up with the sounds of their voices.

Moritz and I both pictured a tall pine tree that was strung with lights, pulsating to every musical note.

Next, we went to a dumpling restaurant in Chinatown. Our hosts promised us that, despite its appearances, it was a good place to eat.

We walked in and the entire restaurant was nothing short of an eye-sore. Dirty laminated signs were posted on the walls, and the menus had a greasy coating to them. The tables were faux-fancy and chipped. But, the prices for dumplings were the cheapest I had ever seen for anything edible in Australia.

My favorite part of the meal were dollar-coin sized pumpkin cakes, which tasted like cake batter with a mochi outer layer. I had two — everyone else practiced mindful moderation and only ate one.

Melbourne is full of hidden bars and swanky cafes. The whole city has an artsy, hipster feel to it. Our hosts then took us to a shipping container that had been abandoned, and then turned into a bar. I let out an audible gasp. $17 for a cocktail that would be inevitably slurped down in one nervous gulp. I passed on the drinks. Meanwhile, Moritz enjoyed a $10 beer — the standard price for one in Australia.

My best friend used to date a foreign boy who stayed with us a while. He would constantly complain about how things were so much better in his own country.

“In my country, the water is drinkable. Not like this poison!” He would scrunch his face at the taste of our inferior tap water.

“In my country, the people would never need to take a public speaking class – we know how to speak!”

“In my country, we laugh at intelligent humor. Not at stupid American jokes.” He would tort while turning the sound up to Gangnam Style.

I always wondered why he stayed if everything seemed to be better in his own country.

“In California, a beer is only 5 dollars…” I said to Moritz, nostalgically.

A common connection that we have is the longing for “in my country” prices when it comes to just about everything in Australia. The minimum wage is higher here, which is why they can inflate goods prices — but I don’t necessarily understand how they can sustain themselves on a global scale for much longer.

We spent the following day wandering around town and enjoying veggie burgers an all-vegetarian fast food joint, Lord of the Fries in the city square. One of Moritz’s coworkers met us for a drink at Cinema Rooftop Bar – which if you’re an Angelino, is a lot like the Standard but more hipsterlike with cinemas debuting on a projector.

The next day, Moritz attended his conference while I set out on the streets of Melbourne solo. Brunswick Street, an artsy main road filled with hippy-type shops, natural cafes, and street art quickly became my favorite part of the city. I picked up a few presents for Moritz’s birthday that was approaching quickly.

One night, I asked Moritz – who is a tea freak – “what is the hardest tea to swallow?”

His response: “A manatee.”

The joke was supposed punchline with “reality,” but I preferred his answer. So you can understand why I immediately fell for this tea steeper.

At the end of my adventurous day, I attended Moritz’s conference dinner… as the only non-oceanographer there. I felt a bit out of place, but a month of hanging around UWA Oceans Institute had prepared me for this. The food was Spanish tapas style and delicious, and the only rude man at the conference ended up spilling chocolate all over his lap – justice. Famous oceanographers got tipsier than they probably should have, and one even told me about the history of his ex girlfriends (he doesn’t like California because she moved there and got addicted to meth and it was all downhill from there, as you can imagine). I had a blast, and felt welcomed in the sea of oceanographers to which I had no real connection to.

Our flights took off the next morning, and we said goodbye to Melbourne, a city with more people and personality than Perth. However, looking out of the plane window at some the unrivaled beauty of Western Australia’s lonely beaches made it good to be back.

Escape the city and head to my post about Albany or Kalbarri, Werstern Australia!