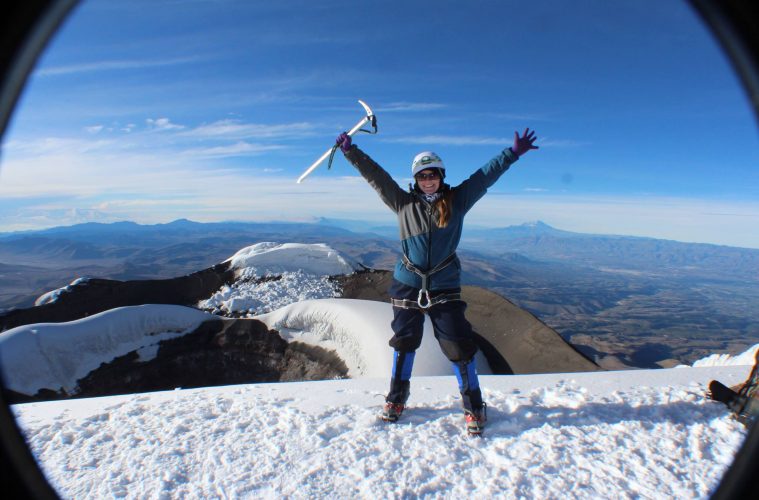 Occasionally, I like to make room on my blog for other inspiring adventurers, creatives, and action addicts. This week, Ashlyn from The Lost Girls Guide is here to talk about what its like being a globetrotter, PADI Divemaster, hiker, and adventurer. Hey Ashlyn, thanks for stopping by! Who are you, what have you been up to, and what is The Lost Girls Guide all about?

Thanks Chantae! I am a globe-trotting adventure junkie. I’ve wandered my way through more than 50 countries on (soon-to-be) seven continents. But along the way, I’ve tried my hand at everything from flying in military jets to hiking equatorial glaciers and experiencing an avalanche and erupting volcano in the same night. I live off of the adrenaline and adventure that comes with putting myself out of my comfort zone.

My blog focuses on my adventures (both globally and locally) as well as travel tips and tricks. I try to make it a mix of practical information for other travelers as well as storytelling for those who are less inclined to travel themselves.

You were the official Saskatchewanderer. First, how do you pronounce that? Second, what do you do? And what is so amazing about Saskatchewan?

It is a tricky one to pronounce! Sort of along the lines of “Sasquatch” with a ‘ka’ instead of the ‘qu’ sound then ‘chew’ and ‘wanderer’ It takes a few tries! In 2015 I was hired for one year by the Government of Saskatchewan to be their official online personality and travel blogger. I flew home from Zambia to take the job. I travelled more than 37,000 kilometres across the province, going on adventures while telling the stories of the people and culture. I shot video, photos and wrote blogs and populated a few different social media channels sharing all my content with my followers. It was a great way to promote one of the lesser known provinces in Canada. Especially as we have some amazing things to offer (we’re officially known as the land of living skies). The best part I took away from the experience is how amazing your own backyard can be to adventure – you don’t always have to fly out of the country to experience something new and different!

You’ve been to a whopping 52 countries. I won’t ask you to choose your favorite, but what are the ones that stand out most to you?

That is always such a tough question – there are so many unique and diverse countries around the world! I’ve done three incredible roadtrips through South Africa/Swaziland/Lesotho, Iceland, and Arizona/Utah. But I also have very fond memories of Madagascar, Malaysia and New Zealand. The first three were so great because of the experiences I shared with those I met traveling. The last three because the experiences I had in the country were incredible!

What was your experience like gaining your PADI Divemaster? Can you tell us a little about that?

I fell in love with diving in 2012 when I completed my open water and advanced course in Thailand and I was hooked. I continued to dive throughout the world logging hundreds of dives throughout more than 15 countries. I’ve pursued some crazy specialties as well like my wreck, ice, dry suit and nitrox courses. Then I decided to change my flights and live temporarily in the Galapagos Islands for two months completing my Rescue and Divemaster courses. Probably one of the most magical places to do it (picture dozens of hammerheads – everyday!). There is so much marine life and many endemic species. But my favourite are what I call the puppies of the underwater world: sea lions! They love to blow bubbles and spin somersaults around you. They’re so playful! As an all-around adventure addict, you’ve also done a ton of thru-hiking. What trails have you completed and what were they like?

Hiking is one of my favourite things to do while traveling. The reward of breathtaking scenery after a grueling hike while knowing few other people have seen the view themselves is what attracts me to hiking. Most recently I completed the 75 kilometre West Coast Trail on the coast of British Columbia here in Canada. And a week before that I solo-hiked a 120 kilometre trail in the backcountry at home in Saskatchewan. I encountered six bears along the way and admit it was a little scary. But I’m so proud of accomplishing it! I’ve also done numerous 40-50 kilometre hikes throughout the world as well. One of my favourite mountaineering hikes was summiting Huayna Potosi in Bolivia as it was my very first +6000 metre mountain. The altitude was so challenging! What would you say to women who are afraid or hesitant to pursue their adventure goals.

It’s always going to be a little bit scary. There is no denying that. Every day there is something that is going to make you feel uncomfortable, nervous or scared. But that’s the best thing possible. It means you’re growing and learning and that next time it won’t be quite so hard. So don’t mind that it’s hard, just focus on how you’re going to achieve your next great accomplishment. Because it will probably change your life! If time and money were limitless, what expedition or trip would you go on?

I think I’d never stop traveling! There are so many places to see I don’t think I’ll ever get to them all in my lifetime. I love being able to share my adventures with those I care about so I would use my money to encourage family and friends to join me on my travels. As for destinations, I’m very lucky and heading out on an Antarctic adventure right away so will be ticking off that seventh continent (and the most expensive!). But if I were to choose another destination I’d like to get to, it would most likely be the Middle East. I have yet to go and think the culture, food and history would be incredible.