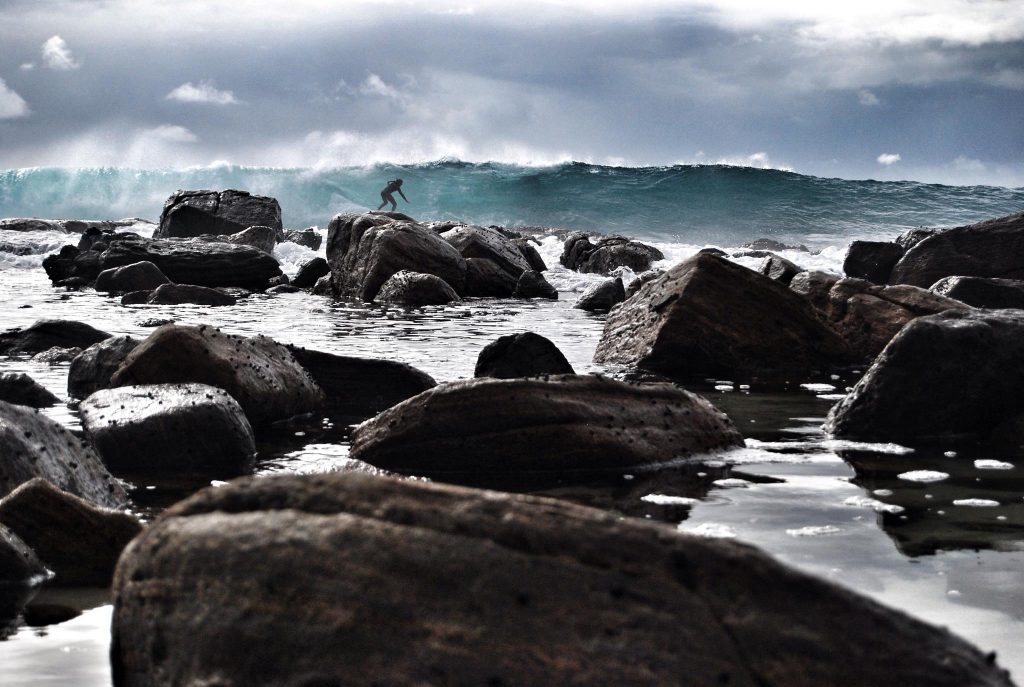 Surfer behind the rocks

“Margs” for Western Australians isn’t just a term used to order a delicious Mexican drink, it’s what they affectionately call one of the best surfing towns in the world located in the vast state of Western Australia.

“Pretty big waves are coming in this weekend, we should go.” Moritz stated with only a slight tinge of enthusiasm.

In San Diego, when waves with over 12 foot faces occur (which is rare), everyone and their mom goes to the beach to either witness or get thumped around in the surf. However, In WA, it’s just another weekend in Margs.

We packed up the car and made a pit stop in Bunbury along the way. Groovin´the Moo, a popular music festival, was playing and we scoped the premises to see if sneaking our way in would be possible.

The verdict: definitely not. Gates and guards formed an impenetrable fortress around the music. We luckily found a grassy knoll and pulled out our camping chairs, blankets, and binoculars. We first caught the tail end of Tegan & Sara, followed by The Kooks and Temper Trap.

“I didn’t realize he was a redhead!” I proclaimed as the main Kook sang his most famous song.

“He’s not a redhead, it’s just the lighting.”

Moritz squinted into the distance.

We argued about his hair for a few more minutes, feeling like old crotchety geriatrics watching the young yipper snappers dance in the gated stage front. We would scowl when a beach ball suddenly blacked out our binocular view. Imbeciles! Who do they think they are, throwing beach balls within our line of vision.

Turns out the main Kook is a brunette but there is a redhead in the band, so I get half of a point (and so does Moritz).

Finally, we arrived at Conto Campground in Margaret River during the wee hours of the morning and were greeted by kangaroos! I barely slept because I kept hearing them bustle about the area and the mere thought of one poking the tent with it’s long fingernails/talons was enough to let my imagination get the best of me.

In the morning, we set out to surf. No wetsuit, a fear of the reef we were going to, and overall lack of skill kept me out of the water long enough to take some pictures of Moritz becoming one with the water (and sharks).

Sharks are a legitimate problem in Western Australia. It´s not uncommon to see crosses on the beach devoted to shark attacks — four crosses stood under the staircase that led down to the break Moritz surfed at. Most of the attacks in the past decade have occurred sooner rather than later.

The town is mellow at night, so we spent the evening at the local chocolate factory. They have a chocolate chip station located at the front of the store where you can snack on some of the delicious sugar plops.

One of Moritz’s friends told me that there would be free chocolate and that it would be mostly unattended. I came prepared, wearing my heaviest jacket because it had the biggest pockets to load up on the sugary goodness.

1567 chocolate chips, 6 cavities, and a strong sugar rush pulsating through my veins later, we left to go to just about the only lively place in Margs — Settler’s Tavern.

Thankfully, sleeping was much easier the next night because the kangaroos wised up and decided to not trespass onto our campsite.

The next day, Moritz surfed at Pevelly’s Point while I admired the amazing double rainbow spanning over the water and watched people wipe-out. Pevelly’s is one of our favorite spots to picnic, and for good reason. The point overlooks a few of Western Australia’s best surf spots.

Later, we toured Mammoth Cave before sunset. Surprisingly, the cave was unmonitored. There weren’t even signs saying “Don’t touch the 35,000 year old stalactites.” So, Moritz took the lack of signs as an invitation to bang as hard as he could on the stalactites to see what sound they made. He beat on the stalactites like a musically challenged caveman on a first set of bongos, and I awaited our seemingly inevitable death by stalactite stabbing. Funny thing is, I used to think the saying, “where there’s a rule, there’s a reason,” was a stupid phrase that power trippers liked until I met my beloved.

Moritz wants me to mention that banging on stalactites sounds awesome.

Moritz stopped banging on the cave walls just long enough for us to enjoy our audio tour.

“Did you know that’s the difference between them?” I asked the caveman.

“Yeah. Except somebody told me an easier way to remember. Stalactites hang down like teets.”

I winced. Who knew geology could be so explicit.

Our jaunt to Margs was short and sweet. The weather was an interesting mix of sunny and stormy, which created perfect rainbows and a cool mist that lingered in the air. We arrived back in Perth late at night. Moritz slept contently knowing he had gone out in some nice waves, and I was content with returning unscathed by kangaroos.

Did this post entertain your noggin? Need more procrastination material? Then check out my posts about Albany, funny things kids do, and my guide to spontaneity!