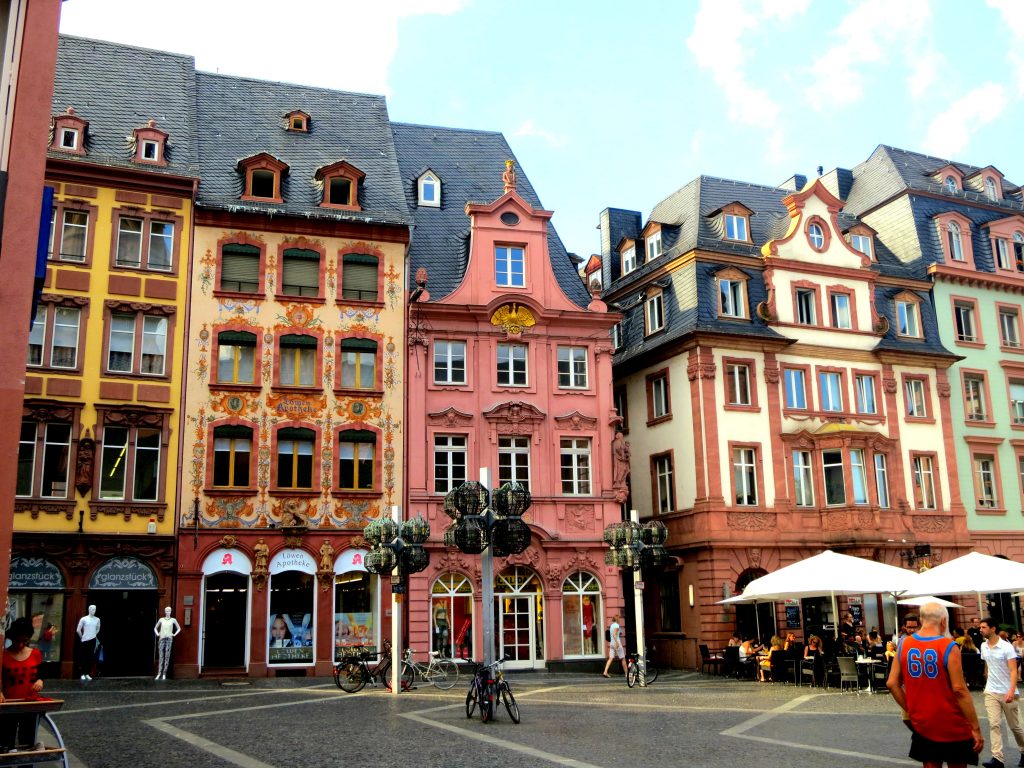 Just Getting to Know Mainz, Germany

Not going to lie, the quickly arriving departure date of my upcoming trip to Bali and Lombok has lit a fire under me to catch up on my travels that happened, well, a while ago.

So let’s go back to Mainz, shall we?

Meeting your boyfriend’s parents for the first time can be quite a nerve-wracking experience.

Meeting your boyfriend’s parents without your boyfriend present, in another country, and when you don’t speak their language… utterly terrifying.

I got off the plane at Frankfurt-Hahn Airport and could feel my face turning beet red. Great. Hi, I’m Chantae… your son’s girlfriend who also happens to be part tomato… yeah, yeah the fruit not the vegetable… I muttered to myself while dragging my overfilled backpack through the security gate.

Do I look the same as I do online? Will they recognize me? Other questions that only people going on first eHarmony dates ask themselves flooded my brain.

I walked through the exit and immediately spotted Birgit, Moritz’s mom.

Oh man! Why is she asking that with a question mark?!? I knew I should have sent a more recognizable picture.

“Heyyyy” I smiled. We hugged.

I got in the car with her and Helmie (who dedicated blog readers have met by now) and we all exchanged small talk for the first few minutes of the drive. Then, Birgit told me she had a text from Moritz who was asking what we were up to.

“Tell him that we’ve stopped to pet some cows on the side of the freeway because I’ve never seen German cows before.”

“YES!” Birgit laughed and tossed me her phone, “Do it.” (Moritz believed us).

From that point on, I could tell that spending time with his parents wouldn’t be awkward at all. My face returned to its usual sunburned-pink color, instead of violent red.

Moritz’s parents had big plans for my first day in Mainz, a small city located on the Rhine River. Moritz gave strict instructions to his parents forbidding them to show me his city without him. So, they improvised by taking me to a few of the many, many castles nestled along the beautiful river.

For some reason, I always envisioned German castles as rare gems, located sporadically throughout the country. Little did I know that my mind would be practically bombarded with castles throughout the day. With each mile along the river, we’d see another castle… until finally we stopped at Burg Rheinstein for a self-guided tour. and then we toured another one… The monastery had a small cafe attached to it, and I double-taked as the waitresses brought us water wearing full dirndles. Wait, did people in Germany really dress like this? Birgit must have caught me staring, because she explained that they were in costume, and lederhosen and dirndles were reserved for old people in Bavaria.

Visions of Moritz wearing lederhosen flashed in my head. I can’t lie, I’m disappointed that he doesn’t stick to his German roots when it comes to style.

Finally, Moritz’s day of arrival came. After 90 long days apart, I had grown used to being without him and was starting to enjoy life as an only child in his home with Birgit and Helmie tenderly taking care of me. They gave me great food, took me on adventures, we cuddled up for a movie… Part of me was a bit jealous that Moritz would just show up and start taking all of their attention again. After all, he was their only child for 25 years, let someone else have a turn!

Panic set in when I realized that I didn’t have a costume to wear to the airport. Tradition in Moritz and I’s relationship demands that the picking-up partner must pick up the flying-partner in costume or else! Moritz not only wore, but also created, a full-size Spongebob Squarepants costume when he picked me up last time.

Luckily, Birgit had an idea.

I put on the shining knight’s costume and proudly waved the Mainz flag for every person that walked off of his flight.

Moritz caught the metallic glint of my outfit out of the corner of his eye and came over. We were reunited at last as knight and damsel ready to conquer the castles of Germany together.

…or at least pay an entrance fee to see them.

Moritz took me around his beloved city, and it seemed as though our home towns couldn’t be more different. I grew up in San Diego suburbia, where sunshine and coastline reigned.

Mainz is full of history seen in the nooks of the buildings, where during WWII, bullets rained. Tall, wooden, A-frame homes lined the Rhine River, and small stolpersteins (or “stumbling blocks”) nestled in the cobblestone streets. The golden squares are a contemporary memorial concept that commemorates victims of the Holocaust by naming them and placing them in the neighborhoods they last lived before tragedy struck the country. In one part of Mainz, the relics of a synagogue stand in front of the new one built to replace it after the original was destroyed. In a neighborhood that was once predominantly Jewish, a somber cloak hangs over the new people who have moved into the homes of those who were forced to flee. Mainz’s rich history is a double edged sword when it comes to planning logistics. When the city began the building of one of its shopping malls, they discovered an old monastery. When they demolished the monastery, they discovered ancient Roman Ruins underneath. Now, you are able to visit the ruins through the mall’s museum in between shopping for shirts and shoes. The museum host stated she was excited for construction to take place in Mainz, because when the construction workers built the new train station, they discovered an ancient amphitheater!

After hearing story after story about Mainz and the people who live there, I was happy to experience it for myself. Up to this point, I had simply been a traveler in Europe – free to attach and detach myself to whatever location I feel. Any discomfort with the language could be easily reprieved by staying at a hostel. Now, I had an arsenal of fun-loving Germans to show me a more genuine experience.

…Even if my German tour guides loved this replica of Constantine’s foot a little too much.