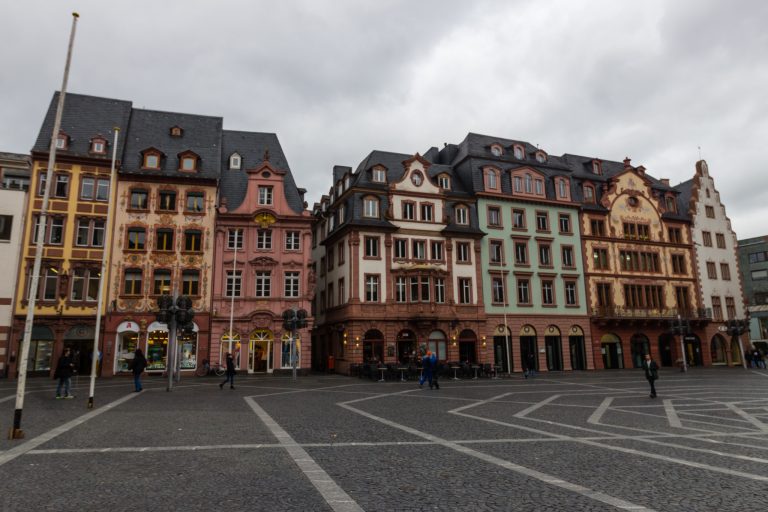 First, we scribbled ancient messages on the walls of our caves. Then, we fine-tuned our hands to write words and stories by putting ink to paper. Now, we use keyboards, swipes, and emojis through the touch of our fingertips. The printed word has spread religion, started wars, inspired revolutions, ended marriages, holds the history of humanity, and is preferred communication method of internet trolls. And somewhere in the middle of these words we’ve been writing and reading stands Johann Gutenberg, creator of movable type and one of the most influential humans in the past millennium. We can credit Gutenberg and his investors, guilders, assistants for the reason we have mainstream media, unread books stuffed in the shelves of dusty libraries, and the post you’re reading now. He was notoriously cranky, created the first mass-produced Bibles, and likely died without a penny to his name. Mainz is where Gutenberg’s all-encompassing influence on the course of history began. When the name Mainz is spoken to outsiders, it’s usually met with a head tilt and followed by, “it’s near Frankfurt” as an explanation. But the historical city is so much more than Frankfurt’s sidekick.

My goal for visiting Mainz this time around wasn’t to view the city just as Mo’s hometown, but as the birthplace to the catalyst of one of the most powerful creations of mankind. Mainz is divided into two areas, the old and the new. The historical section has buildings dating back to the 1400s, cobblestone streets, and dark wine cellars. The modern section features a shopping malls and cookie cut shop fronts. The Gutenberg Museum is in Mainz’s older district, housing an original Gutenberg Bible and tens of books that show just how influential the printing press was. Aside from religion, now science, literature, and history could be common knowledge.

To man the printing press, Gutenberg hired burly men who could handle endless repetitions of the force required to print one sheet at a time. Inside the museum, I placed a large piece of paper into the press, and fed it through a roller. Thick wet ink letters imprinted onto the page. Though the technology often relieves physical labor, the printing press was an exception. Every letter had to be melted, hammered, chiseled, and sorted tediously. The press itself was heavy and demanded strength. It took years of blood and sweat to perfect, with laborers spending massive portions of their lives inside of a dark room – windows blocked to avoid idea theft – backs hunched over sooty fires and crooked fingers placed tiny letters into a template.

When the printing press first came out, people feared it. Scribes were often credited with putting the hand of God into each handwritten book. God’s hand had been replaced by metal stamps. The impact of mass-produced Bibles was and still is immeasurable. With the Bible came the spread of Christianity, with the spread of Christianity came religious warfare, colonialism, and common dogmas. It’s interesting to imagine what would have happened if Gutenberg mass-printed any other religious text. Would our world be the same as we know it?

Today, words continue to spread like wildfire. Thinkers ignite them, supporters stoke them, and extremists suppress them. Germany is the textbook case for this at the moment, where comedian Jan Bohmermann, Prime Minister Angela Merkel, and Turkish tyrant Erdogan have engaged in a political storm that centers around one single thing: the freedom of speech. In the US, we’re experiencing a bizarre case of people wanting to instigate progress not by battling and asserting ideas, but by retreating from and banning the ones that don’t fit their narrative. Though we’ve come so far since Gutenberg’s day, we’re experiencing the same conflicts that rocked the world long ago.

In places where the disease of illiteracy is common and book-burning is rampant, people are held captive by radio/TV messages with no way of seeking alternative answers to combat propaganda. Without access to all forms of communication, we’re sheep to censors (both outside and self-inflicted) and trapped echo chambers.

And like a good book, the deeper you delve into the city of Mainz, the more the story reveals. The grandiose Mainz Cathedral has withstood lightning strikes, bombings, invasions, and flooding, yet remains standing. Mainz’s ancient Roman theater ruins is yet another symbol of a human communication. Over 80 percent of the main city was destroyed in WWII by Allied air strikes. And like much of Germany, the city has a dark trend of tolerating their minority Jewish population in the best of times, and massacring them during the worst. It was occupied by the French after WWI and then again after WWII. The city has risen and fallen more times than I can keep track of. How many of these events were the direct result of the printed word? So to say that Mainz is “near Frankfurt,” or is “famous for its wine,” is not acknowledging the big picture. It was in a home on a cobblestone street with blacked-out windows in Mainz, Germany, that Gutenberg and his supporters started a worldwide revolution.