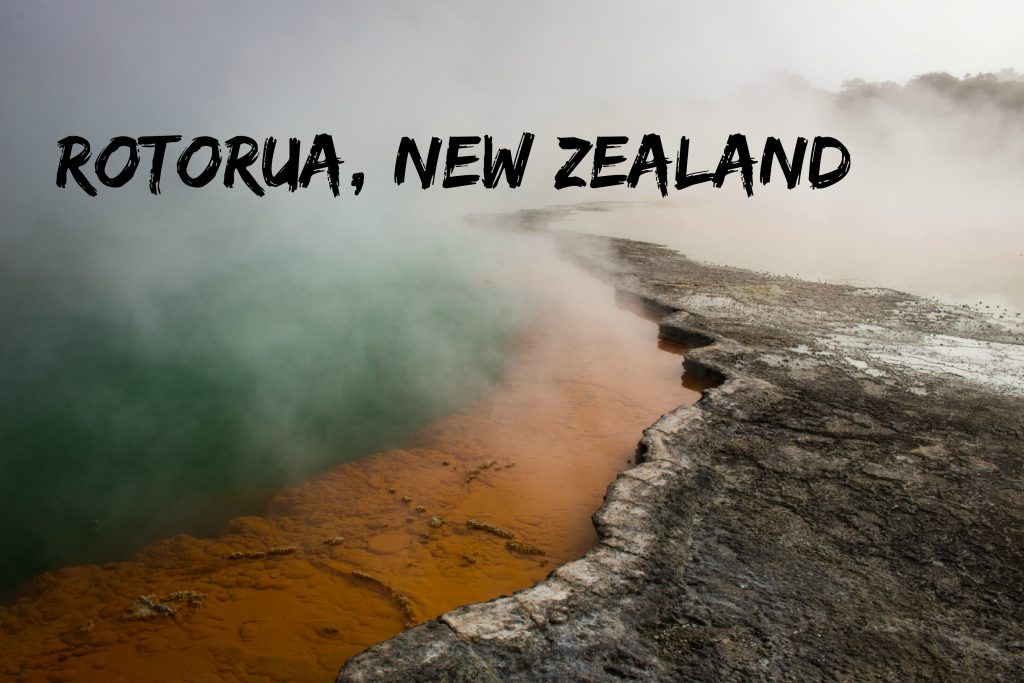 Thanks to the time change from Perth to New Zealand robbing me from a night of sleep, I stumbled out of Auckland airport with one eye open and my hair looking like I’d been shocked by my power converter. My usual figure-it-out-as-I-go method of traveling simply wasn’t going to work for New Zealand. I only had four nights on the North Island before jetting off to my home state of California. I willed myself to muster enough energy to dart straight to Rotorua, a city known to be “an assault on the senses… most notably the sense of smell,” according to Amanda from A Dangerous Business. Rotorua is a hotspot of geothermal activity, which produces amazing geysers and pools but at the expense of stinking like rotten eggs.

While the town did reek slightly, it wasn’t as bad as people hyped it up to be. I envisioned myself traipsing through thick fog with a gas mask and goggles based on the descriptions that I’d been given. And although I’m not one to avoid exaggeration, I will forever view everyone who has moaned about the smell as wussies. Complete wussies.  Compared to most fraternity houses, Rotorua is a city version of Bath & Body Works. One Tripadvisor reviewer wrote that they were continually dry-retching from the smell, leading them to leave immediately after stepping foot out of their van. I like to imagine that it’s Rotorua’s way of making sure natural selection still plays a role in who visits and who doesn’t, with mother nature stink bombing unappreciative wimps until they leave.

Tires screech as Mr. Johnson loads his family into the car. His children’s eyes are burning from the fumes. His wife is wailing, “John, please save us!” Mr. Johnson bravely stomps on the gas pedal, speeding out of the city just in time. Fog looms in the background. Their family vacation comes to a tragic end. After thumping my bags off on top of my hostel bed, I made my way to the Redwood Forest. There’s an unbridled freedom that comes with traveling solo. You can be whoever you want to be, go wherever you want for however long you want. It had been a year since I’d traveled on my own, and it was a liberating feeling to stroll through the woods at my own pace. That is, until I got lost and had nobody to consult on the correct way back. I played the game of “is that my footprint? Or just a foot shaped puddle…?” for thirty minutes before popping out onto a road. Not the road I started on, but it was close enough. I recommend renting a bike and riding around through the forest if you love the sound of birds and the view of dark green ferns. I couldn’t even remember the last time I’d had a moment to myself. This trip landed in the middle of a flurry of stress and chaos. In the month before leaving, I worked full time and then some, packed up our house (Moritz and I are moving!), found a new roommate for our new house, needed to finish up a research paper without a working laptop (that still needs to be finished!), coordinated seeing family and friends, planned a trip with my dad (which was then changed!), and ate, slept, and overall functioned like a normal human being. I’m sure I’ve mentioned before that I work with children in foster care and that in itself is enough drama to rival this season’s Game of Thrones. Hopefully this rant somewhat clears up the false stigma that everyone who runs a travel blog has a picturesque, stress free life because boarding the plane to New Zealand, I stuck the rude finger up at my planner, lit it on fire, and tossed it over my shoulder – not literally of course. That’d land me in the slammer.

While the town of Rotorua is small and lively, most people use it as a base for Waiotapu, a geothermal wonderland. A colorful array of volcanic activity, Waiotapu is known as one of the most fantastic places in the world for a good reason. I walked around the park twice — once while it was overcast and misty, and again when the sun burned through the sky. Waiotapu looks like it came straight out of a Jurassic fairy tale, and I expected a velociraptor to swoop overhead at any moment. Mud boiled like water and steam rose into the sky as if the entire park were a cloud factory. One recurring thought looped in my mind: Magic is real. Puddles of opal and lakes of opaque green, these colors are made of multiple chemicals interacting with one another. A concoction of mostly sulfur will produce a yellow hue, while manganese oxide emits a vibrant purple. On a platform called painter’s pallet, I looked out convinced that even Salvador Dali wouldn’t be able to make a scene look more surreal. Before I had a chance to see the Lady Knox Geyser erupt myself, I read a brochure that stated, “LADY KNOX GEYSER ERUPTION! EVERYDAY 10:15!” How peculiar, I thought, this geyser is more timely than most humans. It turned out that the geyser did not naturally have the punctuality of my mother, but in fact was kept on time thanks to the help of a park ranger, who threw something into the geyser’s chimney that caused it to erupt. Apparently, this plot of land used to be an old New Zealand prison, where the prisoners often came to shower. The guide told a story of one of the prisoner’s accidentally dropping a piece of soap (no, this story is not going where you think it is…) into the geyser, changing the surface tension of the water and causing it to erupt. The explosion blew the prisoner’s clothes into the bushes, hanging them to dry. Over the years, the prisoners placed rocks around the geyser, giving it a paper mache cone look. Tall tale or not, exploding geysers are cool no matter what the history is. Back in Rotorua Central

Back at the hostel, I felt a bit shy. I often feel like the human version of a jack-in-the-box… quiet and reserved until someone comes to interact with me. Once they do, I then assault them with my personality. Perhaps the shyness stems from two people at two separate points in my life commenting that I have “intense eye contact.” I keep to myself to avoid the connotations that accompanies having creepy eyes. Eventually, two Maori men in their early twenties approached me for a game of pool and the scene escalated into us asking each other equally semi-culturally insensitive questions in between shots.

Yes. Yes. Probably – but now we eat McDonald’s like the rest of the world.

Do you have guns? Does everyone try to shoot each other all the time? Why aren’t you super fat?

Some of us. Depends. I’m vegetarian and a bad cook.

Two other girls watched Lord of the Rings in the background while the Maori boys and I continued our conversation. Eventually, a tribe of other solo travelers joined us and the conversation steered in a more sterile direction of Where have you been? How long have you been on the road? How long are you traveling for? Basically, the typical questions that only have one underlying answer: who cares. Very few people can provide an answer to these typical questions that’ll intrigue the masses. In Costa Rica, I met a man who scammed the welfare system of America and was getting paid unemployment checks to surf all day every day on the beach – an economic horror story. In Croatia, I met a woman who traveled through India and was widely mistaken as a world famous exotic dancer, leading to countless groping encounters. Other memorable hostel tales include hitchhiking gone wrong, traveling via cargo ship, and an attack from a wily Chinese pig. Unfortunately, these anecdotes are sparse and you have to wade through a sea of country counters (“I went to 43 countries in 8 days!”) and blissful ignorance (“It’s like the locals were poor or something… I mean, they go to the bathroom in a hole!”) to hear the good bits. Still, it’s nice to meet other people buzzing with the excitement of seeing someplace new.

I left the crowd to browse the night market on my own. I threw down a few bucks on a falafel wrap, and a cup of potent chili hot chocolate to wash it down. The meal almost tasted as good as it felt to be on the road again. Where to stay? Rock Solid: One of the best hostels I’ve ever stayed at. It’s super modern, has friendly staff, is clean, and has a great social area. At night, the guests ready to party are redirected to a downstairs room to prevent them from waking people who wish to slumber. Plus, it’s attached to a rock climbing gym where you can give rock climbing a go yourself or watch people from the large glass window. I highly recommend trying to grab a room here. My room was $19 NZ/night for a 6 bed dorm but I was upgraded to a 4 bed for free. I think upgrades are standard for this hostel in the off season. The only downside is it made the next hostel I stayed at seem like a real dud in comparison.

Transportation: I used the Intercity Bus to get there and away. Most buses have wifi on board and if you book early in advance fares can be as low as $1. I flew to Auckland on Air New Zealand.  Air NZ has a twitter account (@AirNZFairy) that grants wishes to those traveling on Air NZ. The account doesn’t seem to be too active, but it’s still worth a shot though!

Eat: Thursday nights, Rotorua has a night market on Tutanekai St. with a variety of food on offer for a scrumptious dinner. It’s also a great place to pick up cheap produce if you plan on cooking your own meals throughout your stay.