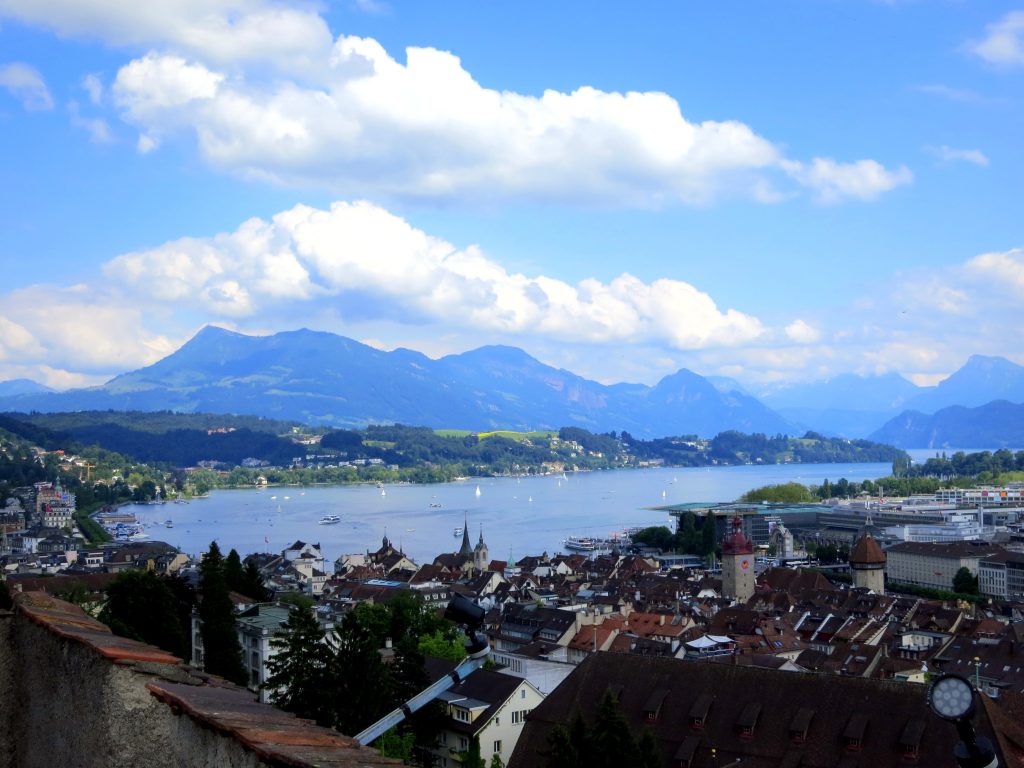 How is this anything but spectacular?

Attack of the Lovebirds in Lucerne, Switzerland

Lucerne is beautiful. I could leave my post just with that statement and splatter pictures everywhere, but everyone knows I’m way too long-winded for that. Lucerne is the type of place that puts even the most fantastical of Disney movies to shame. It’s clean, old-style architecture with a modern touch, and has a stunning mountain looming in the background.

A beautiful meeting point at the center of the city.

I took the very expensive train and was picked up by my Swiss-German CouchSurfing host and his Canadian girlfriend. While generally likable, they spent most of their time staring into each other’s souls and whispering sweet nothings in each other’s ears.

In the evening, we all pitched in to eat legitimate Swiss fondue. At fondue restaurants in California, you are able to dip everything in cheese or chocolate and call it “fondue” – meat, strawberries, wood chips, you name it. In Switzerland? Don’t even think about corrupting the dish with anything other than cheese and bread! The Swiss men laughed in my face after I asked where the rest of the dippers are.

The next day, we walked along the guard towers that granted spectacular views of the quaint city and I even befriended a yak. One of my resolutions this year was to make friends from all places, other species included.

Canadian girl: It’s cool that they put the “Electric Fence” sign so that the yaks know to stay away.

I was pretty confident that the sign was there for the literate humans.

I attended a barbecue put on by one of my host’s Swiss friends. The mixing of Canadians, French, Americans, and Australians at the event kept people speaking a large amount of English – good for me, as my German let alone Swiss German could use some serious work. I was happy to meet such a friendly and eclectic bunch of people, if only for a short time.

After the barbecue, we all emigrated to a festival put on by the city – with multiple stages around the lake. We settled at a comedian singer’s stage. I couldn’t understand the lyrics, so I falsely laughed when those around me would laugh. The Swiss have a stoic reputation, so I wonder if this comedian was a genius of hilarity to get an entire crowd of Lucernites laughing. Everyone I met instantly became my new friend, and the jolly spirit of everyone was nothing short of contagious. The night concluded with a grand firework display over the lake – perfect for me since I’d be missing the 4th of July at home!

My host couple got into a bit of drama with one another but made up for it copiously and loudly during the night… and the morning… and the afternoon… so much so that I no longer felt very comfortable around them. At some point, I wondered if the sound was coming from their room or from a pack of wild basset hounds on the hunt for a tasty meal. Sorry friend, but this awkward move has now won you the “Worst CouchSurfing Host Ever” Award in my book (sorry, not sorry about the neutral reference).

While the lovebirds were busy on their own, I ran into Josh – someone I met in the previous city – and his super friendly girlfriend. We went around the guard tower walls once more (and I waved hello to my friend, the yak) and concluded the day with a stroll along the lake. We stopped for ice cream at one of the many creamery stands, each of us enjoying a different flavor of lactose deliciousness.

Switzerland is beautiful, there’s no getting around that.

I was sad to return to my host’s home because I felt that things had been becoming pretty awkward. I was encroaching on their snow-globe of newfound love! The entire stay, I wondered why they even hosted someone in the first place – were they lovestruck exhibitionists looking for an unsuspecting voyeur?

At the end of my day, I was locked out. I skyped and remained glued to the perimeters of the apartment leaching their wifi. “When will you be home?” I asked. “Whenever we are done with our date,” they said. I was beginning to think A. The host couple abhorred me, B. The host couple has a bizarre fetish, C. The host couple had no idea that hosting people in couchsurfing requires the visitor to be at the host’s house.

I gave a rushed goodbye and caught the first train out to Zurich, sad to leave such beautiful scenery but excited to see what my last stop in Switzerland had in store.