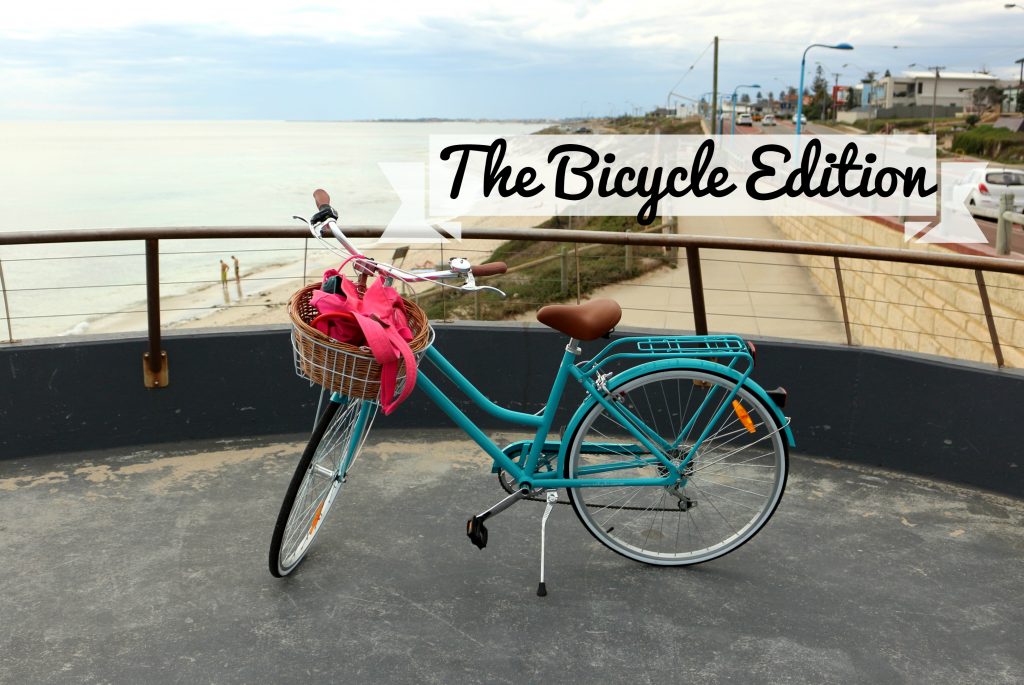 Life Outside! [#5] The Bicycle Edition

Welcome back to Life Outside! The best place to be for a fortnightly dose of sunshine induced inspiration. Each series, I’ll explore some ways to get outside and into some fresh air.

I’ve been entertaining the idea of having a bicycle for a few weeks. Really, I should have been thinking about it ages ago but I thought it might be something we’d rarely use. Then, I’d realized I could be biking to work each morning (5 miles each way) along the coastline instead of spending those few minutes inland trapped inside of a car. I’d get an hour’s worth of a workout just by going to work. I took my friend’s bike for a spin during my lunch break one day and it was love at first bike. What Bicycle to Buy?

From all of my research on this topic, the best bicycle to buy is the one you will use. For me, all it took was a test drive on my friend’s 7-speed vintage bicycle to decide that was what I wanted. However, if I’d be going longer distances or up bigger hills, a road bike would be more useful and practical (and a better fit for say, Moritz, who commutes further than I do). My criteria was that I didn’t want a bike that had to be “fixed” first (i.e. some junk bike at the scrap metal yard), had at least 6 gears, and somewhat stylish under $350 AUD. I first looked for ones secondhand but didn’t have any luck finding one that fit my guidelines — I chose this one because it can be fitted with a surfboard rack, has two places to put baskets for shopping, and is freaking fun to ride. The possibilities are infinite when it comes to bicycles, but remember that the more expensive you buy one for, the more you have to worry about it being stolen – which is the fate my previous bike suffered at the hands of LA gangsters. Though it seems like getting your bike stolen is a right-of-passage for USC students.

On precisely the second day I owned my bike, I hit a curb (some might refer to it as a “large crack” in the pavement) and was tossed overboard. Nobody was around to witness the fiasco and before I knew it, I was up and chasing my wicker basket that was rolling down the hill. While chasing after the runaway basket, I cursed Hollywood depictions of damsels riding down apple tree lined paths in summer dresses. Thanks to my new bike, I skinned my right palm bare as well as my left thigh. My freshly painted bike received some matching scars as well. Turns out that the vintage bike isn’t as forgiving as a mountain bike, and it’s smart not to daydream too much while riding. I’d share pictures of my right hand which is now affectionately named Ol’ Stumpy but I don’t want to make this blog NSFW or attract any fetishists searching for gore on Google.

My friend has a yellow Hyundai. For the first week after meeting him, I’d notice him driving in front of my work. I’d notice him in front of me at an intersection. And I’d notice him sometimes at the grocery store. Just when I thought he was stalking me, I saw that there were not one but three yellow Hyundais in a parking lot of only fifteen cars. It’s the same with bicycles. I’m sure most of you are thinking that reading about the benefits of cycling are obvious but honestly, I had no idea that Perth was such a bike friendly city with so many types of cyclists until I bought a bike myself. Riding a bicycle obviously saves not only money but also helps curb greenhouse gas emissions as well. The politics of gas price fluctuation are less relevant to a person who is able to be self-sufficient by bicycle. I’d also argue that people who ride bicycles are more environmentally aware than the average person anyways because they cover more distances in the environment. One of my favorite financial bloggers calls people who drive pointlessly as “Car Clowns” and insists that 90% of car usage is “[expletive] stupid.” Aside from making me laugh, he does have a point. The cool thing is that bike shops are starting to do Fix Your Own Damn Bike courses… I’ll be signing up for one shortly. Cyclists see weather changes, litter, blooming flowers, and animals along the path more than someone in a car would. Exposure to nature increases a love of nature. It’s a fact. Except, I’ve started noticing that the magpies are getting a bit too territorial for my liking on the bushland side of my commute to work. I’ll be investing in a hockey mask shortly so they don’t peck out my eyes. Those beasts should stay off of the pathway and go back into the Hitchcock movie where they belong.

If you’re tight on money and still want to travel the world emitting solely sweat and tears, you can power this bad boy using nothing but the thunder thighs god gave you.

When I told Moritz about our future plans to buy one of these bike campers and travel the world in one, he immediately smothered my dreams with one question…

“What would you do if you had to go up a hill?”

Fair point… seeing as I can barely pedal myself up the 5% incline of our driveway without gasping like a fish out of water.

Excuses, excuses, excuses. The Vogel family found a way to banish every type of excuse imaginable and fulfill their dream of cycling from Alaska 17,285 miles to the tip of Argentina… with two children pulling their own weight. Family on Bikes is an inspirational blog and book series about the Vogel family who asks, “What would you do if you were not afraid?”

Before the family started, they feared extreme weather, high mountains, and most of all – failure.

Nancy, the mother and writer behind the blog, speculated that they had a “50/50%” chance of failure. Then only to realize that if she didn’t attempt it, there’d be a 100% chance of failure. Three years and 15 countries later the Vogels completed their journey and are living to tell the tale.

What Else is New?

I’ve copped quite a bit of teasing from my coworkers thanks to the bike crash. “You had another accident with your bike?” It’s hard to smile and explain, no — LAST month I had an accident with my scooter. THIS month, it’s my bicycle! Someone put me in a bubble already!

Moritz went to Germany for ten days so things have been a bit quiet at home. We have a tradition of picking each other up from the airport wearing funny outfits, and I’m excited for my latest idea.

Backstory: our car has been making some weird noises and needs to get fixed–but still drives. I’m going to wear a helmet and the motorbike jacket to the airport, and walk up to him while carrying his helmet. When we walk out to the parking lot, I’ll walk directly to the motorbike area and tell him that the car broke down this morning so we’re going to have to fit his luggage on the back of our scooter, or suggest that he extend the handlebar and we can wheel it behind us as I drive!  He’ll be in flight during the time this publishes, and never pays for in-flight wifi.

Do you bike? Why am I so late to the bike party? Do you think you’ll start using one? Let’s discuss.