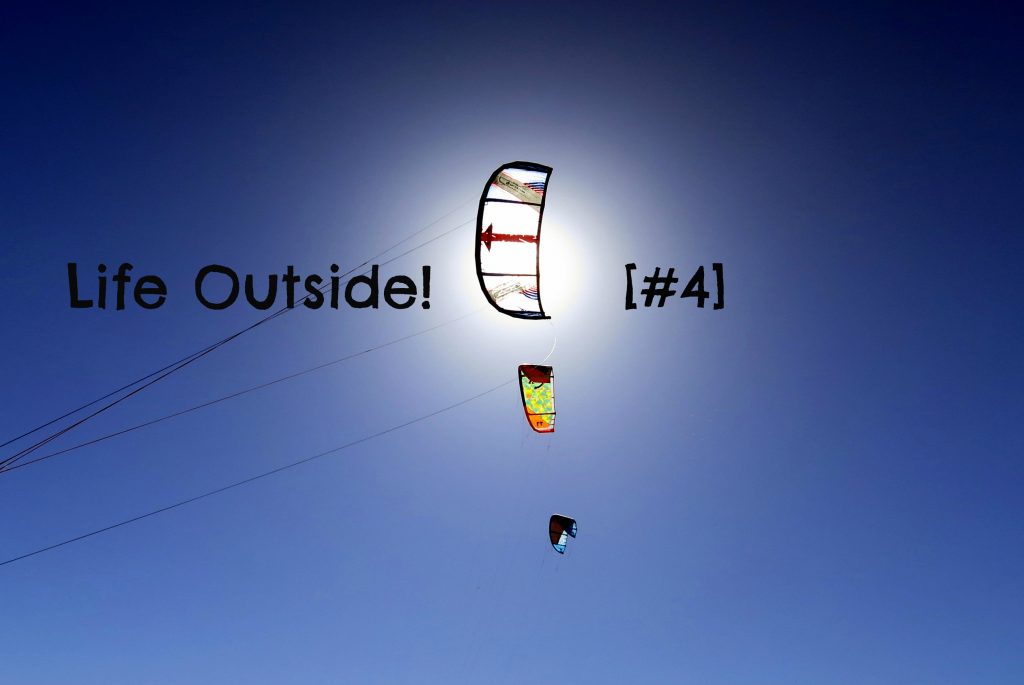 Life Outside! is a fortnightly series of small bits and pieces meant to inspire you to get outdoors and into some fresh air, escaping whatever space that confines you.

This week I booked a trip back home for June, and have a five day stopover in New Zealand! I’m going to rent a car and camp around the North Island, but I’m a bit nervous about the weather thanks to the fact that it will be winter there. Sometimes I imagine myself hiking through lush green mountains, but I just as often imagine myself shivering in the cold on the side of the road. Packing for five days in winter followed by the start of American summer will be interesting. Any Kiwis or NZ lovers want to give me a realistic explanation of what to expect and things I need to do there?

Microadventures of the Week

Honestly, my past two weeks were less than stellar. My work with children in care has been going really well but I’ve taken on a second job in an attempt to work normal hours (working with kids means my shifts are on evenings and weekends, when they aren’t in school). So, I’m feeling like there aren’t enough hours in the day… leading me to entertain thoughts like drinking coffee at 9pm and adopting polyphasic sleeping. Even the kids I work with had a rough week when “Bob” the cricket died. His tombstone reads, “to bob I hope you go to heven you did nothing wrong.” The tombstone used to belong to Rocky, another critter who had the fatal misfortune of being captured in the backyard but hey, what can you do? Life is fragile. Especially when your life is at the hands of kids who rarely remember to put on shoes. At least Bob is forever embalmed in a tupperware container whose body will most likely be preserved by BPA fumes.

Anyways, here’s what I managed to get up to outside of work and obligatory adult responsibilities.

Kitesurfing consistently throughout the week: Aside from getting stung by a jellyfish immediately after doing my first turn ever, kiting has been going really well! I’ve been looking at my kite less and less, and have been able to stay upwind. My next goal is to successfully complete a downwinder — check back next time to see how that goes. Paddle practice: The ocean in Perth has been flatter than a crepe. I’d venture to say pancake but my pancakes often come out lumpy and disfigured, and I don’t want to anyone to get the wrong idea.  Moritz and I instead took the boards out and paddled along the shoreline for about 1/2 mile while the sun was shining. Later, we went to a BBQ where one of our friends said, “I saw you guys paddling yesterday! One of you was cruising along *she points to Moritz* and the other was like, ‘ugh get me out of here’ *points to me*”

Despite what my body language gave off (and okay, I miiight have had some verbal complaints as well…) it was a good workout and we caught a few ripples at the only point that was breaking.

Perth Surfer Girls meetup: A meetup group where water loving chickas just passed it’s three month mark of existence. So far, the group has been growing and growing with girls of all ages wanting to connect with likeminded women. We met up at a bar (one of the few meetups where boys were allowed) and it was interesting to talk to girls about surfing and feel a sense of community. I plan on hosting a meetup soon as well, so if you’re in WA please make sure to say hi sometime and come along.

Beach movie gathering: Maybe watching a movie on the beach is the laziest thing ever — But you still have to bring all of your own blankets, food, and walk down the beach to find the set-up. So it still counts! This is Life Outside!, not Life Fully Throttled!#!#!#. Under the light of the full moon, we crunched on gritty popcorn coated with a thin layer of sand while watching Whiplash.

French movie: I’m taking full advantage of the fact that it’s summer and that I can spend evenings outside watching movies (can you tell?). Moritz, Sara, and I went to Sommerland, a temporary outdoor theater at Moritz’s university. The setup is similar to a traditional movie theater, only that it’s outside! We saw Girlhood (French translation), a poignant movie about growing up as a female in the French ghettos.

. . Making pizza: One evening, Moritz and I made plans to go for a run and swim before dinner. The problem is, our favorite running route happens to pass by our favorite pizza joint. The conversation went as follows:

I started by saying, “I’m hungry. Can we make dinner right after the run?”

Moritz responds, “What if we got pizza after the run?”

“What if we run there, order pizza, swim while the pizza is being made, and then eat the pizza, and then run home?”

“But then we’ll be running just after eating pizza.”

“What if we drive to the pizza shop. Get the pizza. Then drive home?”

“WAIT — what if we go to the grocery store, buy enough ingredients for TWO pizzas, then make the two pizzas at home?”

This is why I can’t have a six pack or defined leg muscles.

The next evening, we buckled up and did walk, though! Mehhh. These past two weeks were a challenge for me. For the most part, Mo and I bought unpackaged products but there were a few nights where we didn’t have enough time to shop properly and found ourselves rushing in and out of the only store that was open (leading to buying a few packaged goods). So far I’ve learned that if I can use my jar system, hit up the fresh food store and the bulk store, then it’s pretty easy to buy things waste free. If I’m in a rush, it gets a bit harder. Ah well, it’s all a learning lesson isn’t it?

On the upside, I got a chance to see what the freecycle community is all about. Moritz and I plan on moving out of our house in June, so my roommates and I completely cleared out out kitchen. I listed the items we didn’t want (over 15 mugs, plates, pans, pots, blenders, muffin tins, etc) and shortly after people were messaging me to come pick things up after posting it on the freecycle Facebook page. I initially posted it in the freecycle Los Angeles group and had people messaging me saying they couldn’t find my address and were driving around! I had to delete the post and send out “Sorry, I actually live in Australia — so if you want that muffin tin, you’re going to have to fly here!”

One woman’s brother was in an accident, leaving him paraplegic, she needs to stock her brother’s new home with necessities and within minutes of posting the situation, hundreds of offers went up for her! She came around and grabbed some of our in good condition goods. It’s so inspiring to see perfectly good things being reused and not ending up as waste. Here’s a great article that explains how much waste Craigslist has saved from being chucked into landfills.

I also participated in Clean Coast Collective’s beach cleanup run by one of my kiting girlfriends. I found two shoes that unfortunately didn’t make a pair, and was shocked at how much trash there was at a seemingly clean beach — especially once you walk a bit inland. Yikes! It’s awesome that something that’s good for the coast can be social and fun at the same time. One older Australian guy stopped and asked me, “Excuse me — why are you all walking around and picking up trash?!” Umm… I’m sorry, do I look like I’m wearing an orange jumpsuit and partaking in mandatory community service? A bit disturbing that people walking along the beach and picking up trash requires an explanation.

The leaders of Clean Coast Collective recently did a road trip around the entire coastline of Australia and picked up trash as they went — talk about meaningful travel in so many ways! They posted a wrap up of what they learned and it was interesting to see that they shared my loathing of organic veggies wrapped in plastic, but only found one plastic bag on the beaches of Exmouth — where bag bans are in place. That’s pretty inspiring to me.

What else is new?

Happy Belated International Women’s Day! In celebration, I participated in an interview on Tripper’s website about who my travel role model is. Can you guess? My grandma has always been a source of inspiration for me and I’m not just saying that because she comments on almost every post (waves at grandma). This weekend we plan to go camping in Margaret River but it looks like a cyclone is going to hit. However, I took the weekend off of work so we’ll go come hell or high water (literally, a 2 meter swell just unexpectedly hit Jurien Bay!).