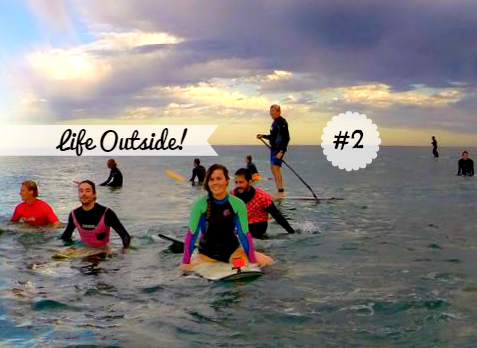 Welcome back to the new fortnightly series, Life Outside!— a place where I will share snippets of microadventures, action sports, eco-friendly tips, and other adventure stories that hopefully inspire you to live a life outside of your home, work, or other space that confines you.

“One of the most tragic things I know about human nature is that all of us tend to put off living. We are all dreaming of some magical rose garden over the horizon instead of enjoying the roses blooming out of our windows today. ” — Dale Carnegie.

Dolphins make an appearance for sunset surfing: Moritz and I finally mounted the GoPro onto our beat-up mini mal. I didn’t tilt the screen up enough to capture my face when surfing, so every picture decapitates me. We had a great time splashing around in the ankle-high waves and the highlight was seeing a pod of dolphins in the distance just as the sun turned the water’s surface a fire-like orange.

Snorkeling at Mettam’s Pool under a yin-yang sky: I spotted an octopus hiding in a hole at the reef nearby my house while snorkeling with Moritz and some friends. Mettam’s Pool is one of my favorite Perth surf spots and it’s so exciting to see who lives underneath while I sit on my board oblivious to all of the creatures under me.

After we got out of the water, one half of the sky turned into a purple, flashing, storm while the other half of the sky remained sunny as usual, a yin-yang type of vibe in the air.

#FluroFriday: Mental illness is something that affects people in every corner of life — surfers included. Perth’s ONEWAVE  community is growing every week it seems to gather together as friends to share stories and surf to raise awareness for mental health issues like depression and anxiety. Moritz was happy to dig through the “donate” pile of my clothes and score this pink tanktop of mine. Yoga in the park: I haven’t been attending yoga classes as much as usual lately (thank you, work!) and my membership to my studio just ended. I’m in limbo between re-enrolling and practicing on my own. Anyways, Adam — the sprightly fellow in the red shirt just above invited me to a new donation based yoga class that happens in a park. The teacher was great and everyone brought healthy snacks — fresh figs, nuts, tea — and wrapped ourselves in sarongs afterward! It’s a nice change to practice outdoors and socialize after yoga.

Photographing lightning: Lightning seems to be the theme of the month – especially after reflecting on my experience of scuba diving in a lightning storm. Our roommates, Moritz, and I scrambled to the highest point of our neighborhood to capture these incredible shots in the distance. Luckily, I’m the shortest so I wasn’t too worried about being struck by a bolt. As my grandma pointed out, wearing bobby pins at a time like this would be a bad choice. Fluff filled fun at the Cuddly Animal Farm: I’m a care worker for children in group homes who have trauma-based behavioral issues. This weekend we took the kids to the cuddly animal farm — where only cuddly animals (which news flash: despite looking like tufts of fluff the “cuddly” animals still have sharp teeth!) live. Animals are therapeutic and the kids (human ones) loved rocking the kids (goat ones) like babies who seemed to enjoy the affection and chance to chew on the human kid’s hair. Our kids also scaled nearby trees to pick fresh leaves for the adult animals. Not sure if that was technically allowed but the animals appreciated it.

I asked one of the workers where the parents of all of these baby animals were.

“We rescue them from the meat industry — then we raise them.”

“Oh, and where do they go when they grow up?”

“We sell them. Hopefully to somebody who won’t eat them.”

I posted a video on my Instagram of baby lambs and kids. You have to check it out if you like bottle fed cuteness!

Getting run over by a white kia: So maybe getting hit by a car isn’t exactly a microadventure but I’m not sure where else to put it and I feel compelled to write about it. Before work on Tuesday, I stopped at a left turn lane while driving my scooter to work. A lady in a white Kia rammed the back of me and my leg took much of the impact. She got out of the car and started hyperventiating that this “just happened to her” and she “just had to pay $2500 to repair her front bumper last week.” Why is this lady just driving around and hitting people? I have no idea. I was really shocked afterward because if I’d have been shoved into the highway instead of the side of the road, things could have gotten really ugly! To top things off this lady doesn’t seem to have insurance and I have a bunk leg with a nasty bruise.

I’ve just finished reading Zero Waste Home from the blogger, Bea Johnson. I’m feeling so inspired to phase waste out of our house. Armed with canvas bags and jars, I discovered that there’s a bulk organic store nearby me. Prior to doing a simple five minute research quest on Google, I’d assumed that Perth was a bad place for organic and bulk food shopping! Palm, meet face. Anyways, I’m happy to say that I was completely package free when buying fruit, bread, snacks, and vegetables from the store. We had cheese, rice, pasta, and milk already at home but I scoped out where I can buy them in bulk by putting the dry goods and cheese into these jars. So really this leaves only almond milk/cow milk as a packaged product to come home with! A badass woman behind one of of my favorite blogs, Challenge Sophie, has cycled from London to Paris in less than a day, is an alpine mountaineer, has climbed Mt. Blanc, whizzed through multiple Ironmans… and yet somehow still isn’t tough enough to compete among men. She applied to be a cast member for an upcoming BBC reality show, “The World’s Toughest Army” where only the toughest, strongest, and bravest need apply. Sophie sent in a well crafted application because obviously she is up there with one of the toughest, strongest, and bravest people. She was rejected within an hour after submitting.

“The application is only open to men currently, as keeping in line with the selection criteria of the special forces.”

You can read about Sophie’s account of it and response to the media. She’s pushing to change the way society views physical strength and endurance when it comes to the sexes.

The links to Amazon products in this post are affiliate links. Any purchase through them gives me billions and billions of dollars (aka ~10% of the purchase) at no extra cost to you!