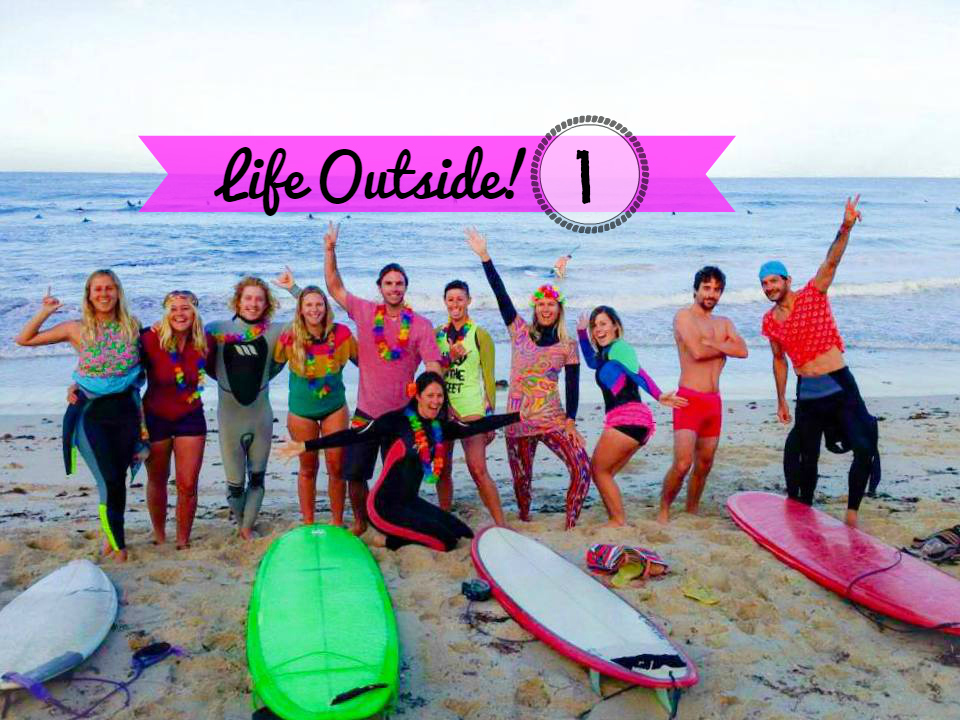 There’s a reason humans feel happier gazing at stars rather than screens and the stale air of a shopping mall cannot compare with the fresh sky of the outdoors. Welcome to the new fortnightly series, Life Outside! — a place where I will share snippets of microadventures, action sports, eco-friendly tips, and other adventure stories that hopefully inspire you to live a life outside of your home, work, or other space that confines you.

Microadventures of the Week

Microadventure: an adventure that is local, cheap, and easy to do yet fulfills your desire for an unusual or exciting experience. You don’t need to go on a great expedition to go on an adventure, you can experience one close by during those coveted free hours you have a week.

Night swimming: Once the sun went down, some friends and I went for a spontaneous swim under the stars at Scarborough Beach. Thanks to a veil of darkness, everyone was acting like a little kid again — rolling around in the sand, doing cartwheels, and sprinting into the water.

Movie on the beach: There’s a group of fellow expats who organize a movie on the beach every once in a while, where they throw up a small white sheet and project a movie against a secluded cliff wall. Moritz and I laid down a few towels and watched the dysfunctional relationship between Frida Kahlo and Diego Rivera in Frida unfold under the night sky. Snorkeling in Mettam’s Pool: For just a few hours, I snagged my snorkel and went down to an ocean pool just a mile from my house. The visibility wasn’t great, but I did get to float among a school of small silver fish and watch some other critters snack on the reef’s algae. Watching the sunset from the roof of a newly explored parking structure: The sherbet colors of the sunset were so beautiful that it inspired a few of us to dance a little boogie to the music blaring from the tacky neon-lit beach club nearby.

Kitesurfing x2: I’m not comfortable enough with kitesurfing for it to not be an unusual or exciting experience — and I don’t think it ever will be! Both sessions were at Pinnaroo Point. I always wait until most of the kitesurfers head in for the day, and kite just before sunset. The only downside to this is that all of the fishermen tend to come out around this time and I have to plan my exit to the beach between sketchy fishing poles. Guess you could say I’m hooked on kitesurfing? Ba dum, chhh!

Surfing in hot pink bloomers: Perth has a OneWave community that has started a movement to help bring awareness for mental illness. Every week for Fluro Friday, surfers splash out in neon clothing and paddle out together for a surf. Moritz wore a pair of my neon-pink spandex running shorts… prompting a random woman in the parking lot to ask me, “Is this a girl’s day out or something?” I could only go in for a few minutes, thanks to my fresh 7:30 am work start time. Margaret River Roadtrip: Moritz and I went on yet another roadtrip two-night camping trip to Margaret River. The first night, we had to camp in someone’s front yard! Thanks to it being Australia Day weekend, Margaret River was more crowded than usual but we still found ourselves surfing at uncrowded smaller surf breaks midday after the morning rush left the water.

We arrived in Dunsborough in the middle of the night, and didn’t want to wake up the neighborhood with out obnoxiously loud air mattress pump. So, Moritz and I walked through the entire neighborhood, pumped it up in the bushes off of the side of a main road, and then walked the queen sized rubber mattress back to our house — holding it over our heads like a canoe.

Of course, the mattress went flat halfway through the night. Possibly from a puncture wound doled out by a sharp branch.

The Surfrider Foundation has started a campaign, Rise Above Plastics, that strives to bring awareness to plastic usage and alternative items to use. Moritz and I did really well at generally avoiding plastic bags by bringing our trusty canvas ones and putting store-bought fruit and veggies straight onto the conveyor belt instead of separated bags. Boomerang Bags has just started to take off in Perth and I’ve signed up to volunteer sewing bags out of old fabric and finally put my dusty sewing machine to use.

However, we now have a popped air mattress that’s irreparable as well as two other’s lying around in our storage room from past roommates. I’m not sure whether these can be recycled — and if so, where? Our neighborhood’s recycling program is basically nonexistent so I’ll have to truck these somewhere to be recycled properly. Note: Never buying or inheriting one again!

For a freelance assignment, I chased down Simon Marks, one half of a duo that has just set off to kitesurf along the barren coastline of Western Australia without any support. No 4WD following them along the shoreline with supplies and no real backup plan if things go awry. Once they pass Perth, they’ll be unreachable in a timely manner. They’ve built a small capsule (cheekily named “Choad”) carrying all of their first aid, food, and water purifier that will drag behind one of the kitesurfers on a literal lifeline. Already, they’ve faced a snapped tow line and had to swim a 12m kite ashore. Still, Simon told me that the trip along Western Australia isn’t the finish line — it’s the starting gate in the grand scheme of their downwind without support adventures.