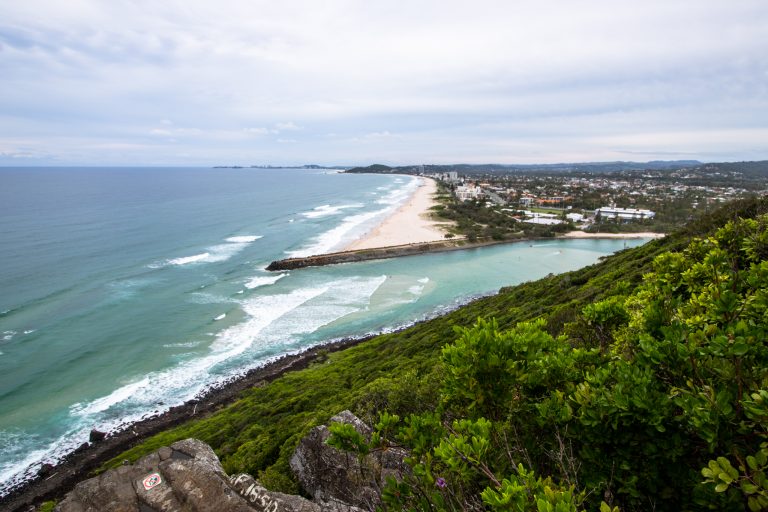 Layovers and Life in Limbo: The Gold Coast, Queensland

It’s been over three years since I moved overseas to Western Australia. At the end of this year, it will likely be time to move elsewhere. But where? This is the golden question that keeps me up late at night, when my mind fantasizes about living somewhere new, staying put, or going home to California in a flurry of anxiety and excitement. For the past few months, I’ve had an impossible time living in the present without wondering about the future. If I buy this lamp, will I have to worry about selling it in three months?

If I make this friend, will we keep in touch if I move away?

If I eat this piece of chocolate, will my roommate notice that his stash has been wiped out?

When I landed in Gold Coast for a few days on my way from Perth to California, I physically lived all that’d I’d been internalizing. In a state of neither here nor there, but aiming to enjoy the present anyways, I figured that layovers are to travel as big transitions are to life.

I always get two trips out of a long-haul flight. Not just because I hate flying — though being encapsulated in a human-odor chamber plays a part — but because I love getting a chance to explore a city that’s not on my radar. (You can read about taking advantage of your layovers in a guide I wrote for Skyscanner.)

Luckily, two friends living in Gold Coast generously let me stay with them during my three-day layover.

Gold Coast, affectionately dubbed “The Goldie” is a mix of laid-back beach culture meets big city vibes. Think shiny high-rise apartments intermixed with your typical suburb, lush mini-jungles along the coastline, trendy restaurants with coconut frozen yogurt, national parks, and a vibrant social scene. On paper, the Gold coast meets most of my relocation criteria (sunny, not too crowded, outdoor and surf lifestyle) missing the mark on just two (low cost of living, closer to family). Could I see myself living here once the calendar flips to 2017?

“If you want to come with us for a surf, we’re going before sunrise.”

I couldn’t sleep the night I landed, but didn’t want to miss out on my first chance to surf in Australia’s Pacific Ocean. I hate to admit it, but I rarely wake up early enough to welcome the day as soon as it starts. We stayed out in small but dumpy waves at Palm Beach just long enough to see the sky turn from pink to blue. My arms ached from the paddle-out and I wondered if my lack of strength stemmed from being sleepy, or just plain wimpy. Unfortunately, a glance at my biceps pointed to the latter. A few hefty wipeouts combined with sore arms didn’t help with my surfing anxiety, something that often triggers (embarrassing) panic attacks when I’m tired in the water. After the session I texted Mo, “You’ll be fine, they said. It’ll be fun, they said.” followed by a pic of me fake crying as a summary of the session. We went for round two at Greenmount, a mellow break left of Snapper Rocks that churns out factory perfect barrels on big days and friendly, peeling waves when it’s small. I borrowed a blue foamie and had the best time catching a handful of gentle waves that rolled through — despite the crowd of logs, kayaks, and shredding grommets. The aquarium-clear water, sunshine, and fun rides ended up being the antidote to the anxiety that flared up during our previous session.

Biking from Burleigh to Surfers Paradise: The Ride That Humbled Me

My friend warned me that she thought something was wrong with her bike because it seemed to take more peddle-power than your average ride. I waved it off. It’ll be fine for the fifteen kilometer ride from Burleigh Head to Surfers Paradise.

I scrolled through my podcast playlist and picked a title about a man, Jesse, who discovered that his female lover/penpal was actually another man — a sad story about old-school catfishing in the 1980s. The problem with solo travel is that you often have memories of places that are tinted with, “Ah yes, that’s where I saw the dolphins… And learned that Jesse was in love!” when you listen to podcasts in lieu of travel companion’s voices. Two kilometers into my ride, my legs started burning with the fury of a thousand fire ants tap-dancing with hot plates as shoes onto my skin. Five kilometers in, I arrived at a small hill. One path veered inland while the other path steeply went straight over the top. Weighing my options, I peddled sloth speed full-throttle straight ahead. Of course, I was rewarded with not one, not two, but three flights of stairs for my efforts. A group of people stood behind me, and I stifled any heavy breathing to make it seem like I specifically chose the staircase route over the obvious bike path. Mid-way down, I rested at one of the platforms and looked out at the ocean. An optimist wrote the words “Happy Vibes” in the sand. Two girls stood next to me, waiting for me to leave so that they could take selfies. I wanted them to leave because I didn’t want them watching me pant like a pig in a mud race. Eventually, they ceded and I lifted the bike over my shoulder. A long line of joggers awaited at the bottom and stared as I made my bumbling descent. My mood tanked when I discovered that Jesse had been donating money — money that he didn’t have — to his fake penpal lover.

My arms ached from the bike hoisting.

My heart ached for Jesse. Almost an hour later, I cycled past Mermaid Beach and Broadbeach, a half hour behind Google Maps’ predicted arrival time. The coastline was lined with suburban homes, apartment complexes, lifesaving clubs, clean beaches, and the odd park here and there. Trendy cafes are spread few and far between, making the overall ride a bit residential but beautiful nonetheless. The Gold Coast should have ran their names by a few more copyeditors before going ahead and labeling everything as kitschy as possible. There’s Mermaid Beach, Palm Beach (of course in the neighborhood of Miami),  and most cringeworthy of all, “Surfers Paradise.” Eight-year-old Hungarians could think of more creative terms in their third grade English class.

How did the town get named? Well, imagine a fresh, young, business man rolling up his cufflinked sleeves and firing up a Powerpoint presentation at his urban planning meeting. He dims the lights.

Seaside Ave. is adjacent to Seabeach Ave., just a few streets up from Seashell Ave. The neighborhood with weaving waterways is called Venice is laden with pizza references. Here, you can find Amalfi Dr. across from the local Hooters. Come autentico!

The naming debacle makes me want to grab Gold Coast by the shoulders, shake it, slap it in the face, and give it a pep talk.

You be you, Gold Coast. Don’t let anyone turn you into a knock-off of anything else. I wandered through Surfers Paradise, feeling like I’d been stuck in a movie set. The shops and restaurants were uncrowded, with just a few sunbathers dotting the beach. Every shopkeeper and food server I talked to was a backpacker taking advantage of their working holiday visa. I wondered what Jesse, who just discovered that his penpal lover was fake, would think of the place.

I think to make the most of Surfers Paradise, I have to see it on the weekend or on a weeknight to judge it fairly.

Then, I did the long slog back on the malfunctioning bicycle (and made the mistake of taking the stairs again). After each workday, the grassy knolls around Burleigh Heads are carpeted with picnic blankets and overrun by families, couples, and groups of friends spending time together as the sun goes down. Surfers climb in and out of the water. Kayakers paddle to the inlet. Joggers head down the path into the micro-jungle of Burleigh Heads. Every public space is used to its full capacity. I walked into Burleigh Heads after watching surfers catch waves at the point. Though the forest is not large by any means, it feels miles away from any semblance of a big city or suburb like a miniature oasis. Here, I could see the allure of living on the Gold Coast. Beautiful nature combined with a lively social scene, isn’t that what I want? Birds sang overhead and the sky turned from blue to soft pink to moody purple. Later that night, I met up with a fellow USC alumna and we talked about what we do, where we’ve been, and what we’re up to next. She just moved to the Gold Coast from the U.S. and is living with her Australian boyfriend. Her down-under adventure was just beginning, an sweet reminder of how exciting new starts can be. Three days is not enough time to know if I’m willing exchange my Western Australian residency for a Queensland one. But, the Gold Coast just didn’t feel like my next new home. Maybe it was my mindset or something about the Gold Coast itself.

Or maybe, when you’re living in limbo, nothing ever really feels quite right anyways.

What to do in Gold Coast: Take advantage of Goldie’s amazing beaches like Coolangatta, Broadbeach, Burleigh, or Kirra. Take surfing lessons or go surfing. Bike from Burleigh to Surfers Paradise. Hike in the Springbrook National Park. Head out on a boat tour.
Where to grab a drink: Head to Oskars at sunset for a perfect view of Surfers Paradise in the distance and surfers close by.
Where to stay in Gold Coast: I recommend staying away from Surfers Paradise if you’re not into overly developed/too touristy scenes and opting for somewhere more laid-back like Burleigh or Broadbeach. The Gold Coast also seems like it’d be a great place to try Couchsurfing, if you’re up for that.